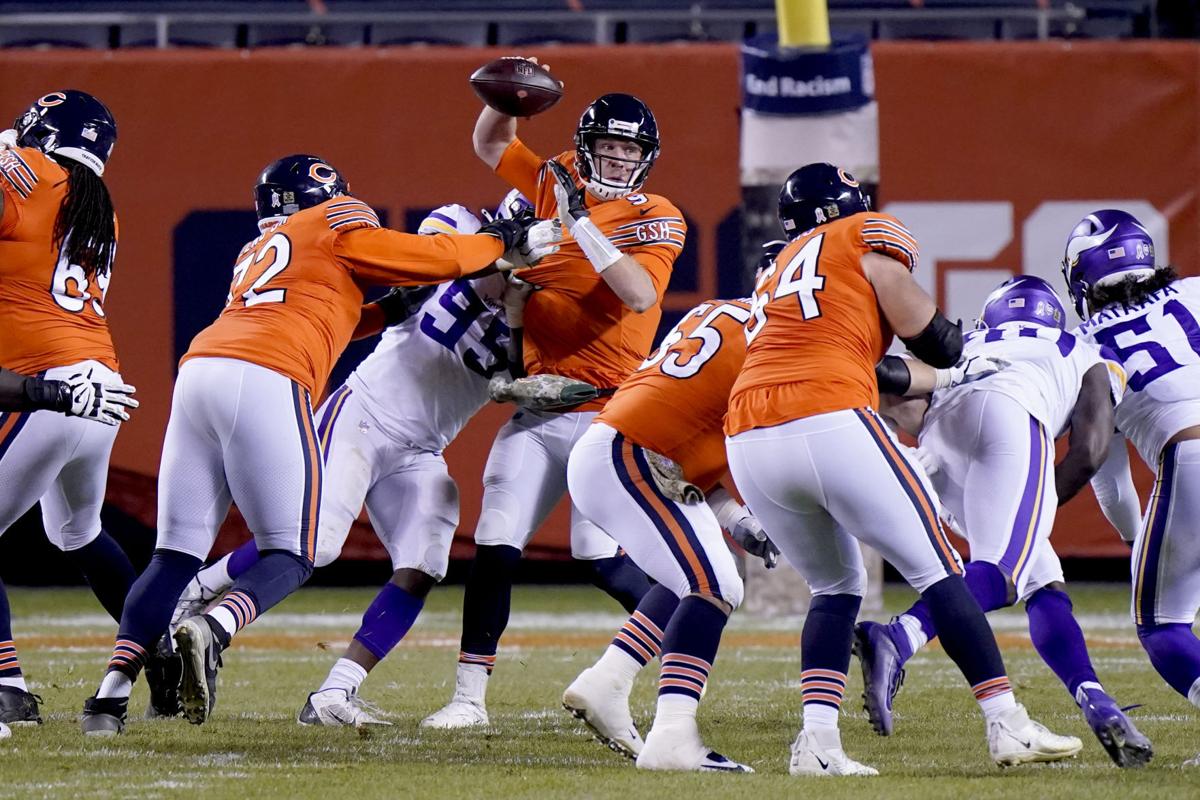 Chicago Bears quarterback Nick Foles is hit by Minnesota Vikings defensive end Ifeadi Odenigbo (95) during the second half of Monday's game in Chicago. Foles was injured on the play and left the game on a cart. 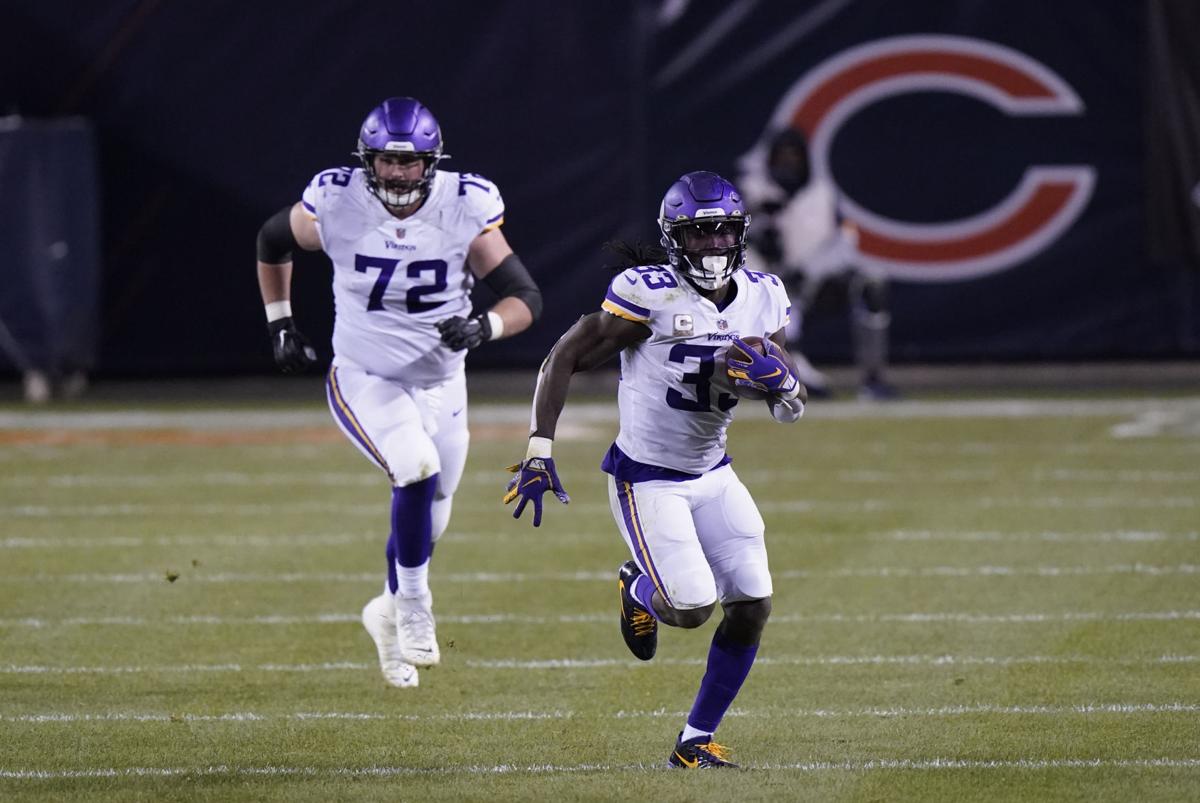 Minnesota Vikings running back Dalvin Cook (33) runs with the ball as teammate Ezra Cleveland (72) watches during the second half of Monday night's game in Chicago.

CHICAGO — Kirk Cousins will take a victory any day of the week. That he finally got one on a Monday night didn’t seem to matter.

Cousins threw for 292 yards and two touchdowns, and the Minnesota Vikings overcame a 104-yard kickoff return by Chicago’s Cordarrelle Patterson to beat the Bears 19-13.

Cousins won for the first time in 10 career Monday night starts. He hit Adam Thielen with a 6-yard touchdown early in the fourth quarter to put Minnesota ahead by the final margin, and the Vikings (4-5) held on for their third straight win. They also snapped a four-game losing streak against Chicago (5-5).

“Great to get a win,” Cousins said. “We’ll try to keep building on it now, and it’ll be so important to keep stringing these together if we can. That’s really what the rest of the season will be all about.”

Bears quarterback Nick Foles got taken from the field on a cart in the game’s final minute. Coach Matt Nagy said Foles’ leg and hip were being evaluated after he got slammed on his right side by Minnesota’s Ifeadi Odenigbo as he threw the ball away.

Patterson joined Josh Cribbs and Leon Washington as the only players with eight kick returns for touchdowns when he ran back the opening kickoff of the second half to give Chicago a 13-7 lead. It was the longest kickoff return in franchise history, surpassing Gale Sayers’ 103-yarder against Pittsburgh on Sept. 17, 1967.

Patterson had all the room he needed as he sprinted up the sideline and raised two fingers as he closed in on the end zone.

“I don’t know what I did, man. I was blacked out at the time,” Patterson said.

The record return was the lone bright spot for the Bears as they lost their fourth in a row and matched their longest skid since Nagy was hired in 2018.

Cousins completed 25 of 36 passes with two touchdowns to Thielen, who has nine on the season. His one-handed TD grab in the first quarter was particularly impressive.

The defense did not allow an offensive touchdown for the first time in 20 games, including the playoffs, and the Vikings won for just the fourth time in 18 games at Soldier Field since it reopened in 2003 following renovations.

With offensive coordinator Bill Lazor calling the plays after Nagy handed off those duties in an effort to lift a unit that ranks near the bottom of the NFL, the Bears managed 149 yards. It was their lowest total since they had 147 against San Francisco on Dec. 3, 2017.

“We need to make sure that we’re really honestly going back now and saying OK, what’s going on, where are we at now that we have some time to really see,” Nagy said.

Foles threw for 106 yards and an interception. It was a far cry from his previous start against the Vikings, when he led Philadelphia past them in the NFC championship game on the way to a Super Bowl title in 2018.

Khalil Mack had his first interception since 2018. But the fading Bears came out flat again on a Monday night; they were dominated by the Rams in Los Angeles last month. And to left tackle Charles Leno Jr., that makes it even worse.

The Bears led 13-7 when Chicago’s Dwayne Harris muffed a punt. The Vikings’ Josh Metellus recovered at the 20, leading to Dan Bailey’s 37-yard field goal. Bailey added a tying 43-yarder with just under two minutes left in the third.

“Yes.” — Vikings coach Mike Zimmer on whether the struggling specials are aging him.

The NFL announced that 7,500 health care workers vaccinated for the coronavirus will be given free tickets to next month's Super Bowl in Tampa.

Super Bowl is set: It's Kansas City vs. Tampa Bay

The Super Bowl matchup is set. The Kansas City Chiefs beat Buffalo in the AFC championship game to advance to face Tampa Bay in the NFL championship.

Tampa Bay quarterback Tom Brady is going to his 10th Super Bowl after the Bucs got past the Green Bay Packers in the NFC championship game.

Packers realize how much Rodgers has at stake this weekend

The Super Bowl count between the two NFC championship game quarterbacks is more one-sided. Brady won six Super Bowl titles and appeared in nine overall while starring for the New England Patriots. Rodgers led the Packers to a Super Bowl crown in the 2010 season, but hasn’t brought them back since.

The Detroit Lions are adding one of the best talent evaluators in the NFL, someone who had a hand in building the rosters for two of this year's playoff teams, to their front office. Former Kansas City Chiefs and Cleveland Browns general manager John Dorsey has agreed to join the Lions as a senior personnel executive, a person with knowledge of the deal but not yet authorized to speak about it ...

Tampa Bay quarterback Tom Brady is going to his 10th Super Bowl after the Bucs got past the Green Bay Packers in the NFC championship game.

The time has come, dadgummit.

Mike Bianchi: One Tom Brady Super Bowl with Bucs would equal six he won with Patriots

As the rumors and rumblings mounted several months ago that the greatest quarterback in NFL history was about to sign a contract with the lowly Tampa Bay Buccaneers, I wrote that, “Putting Tom Brady on the Bucs would be like hanging the Mona Lisa in Room 217 of the Red Roof Inn.”

Every once in awhile sports gives us — gifts us is more like it — a little story like this, unscripted, born of random circumstance.

Chicago Bears quarterback Nick Foles is hit by Minnesota Vikings defensive end Ifeadi Odenigbo (95) during the second half of Monday's game in Chicago. Foles was injured on the play and left the game on a cart.

Minnesota Vikings running back Dalvin Cook (33) runs with the ball as teammate Ezra Cleveland (72) watches during the second half of Monday night's game in Chicago.