Become a Member
Read Today's E-edition
Share This
UNI's Cayd Lara thankful to be alive, grateful to be wrestling
0 comments
Share this
1 of 3 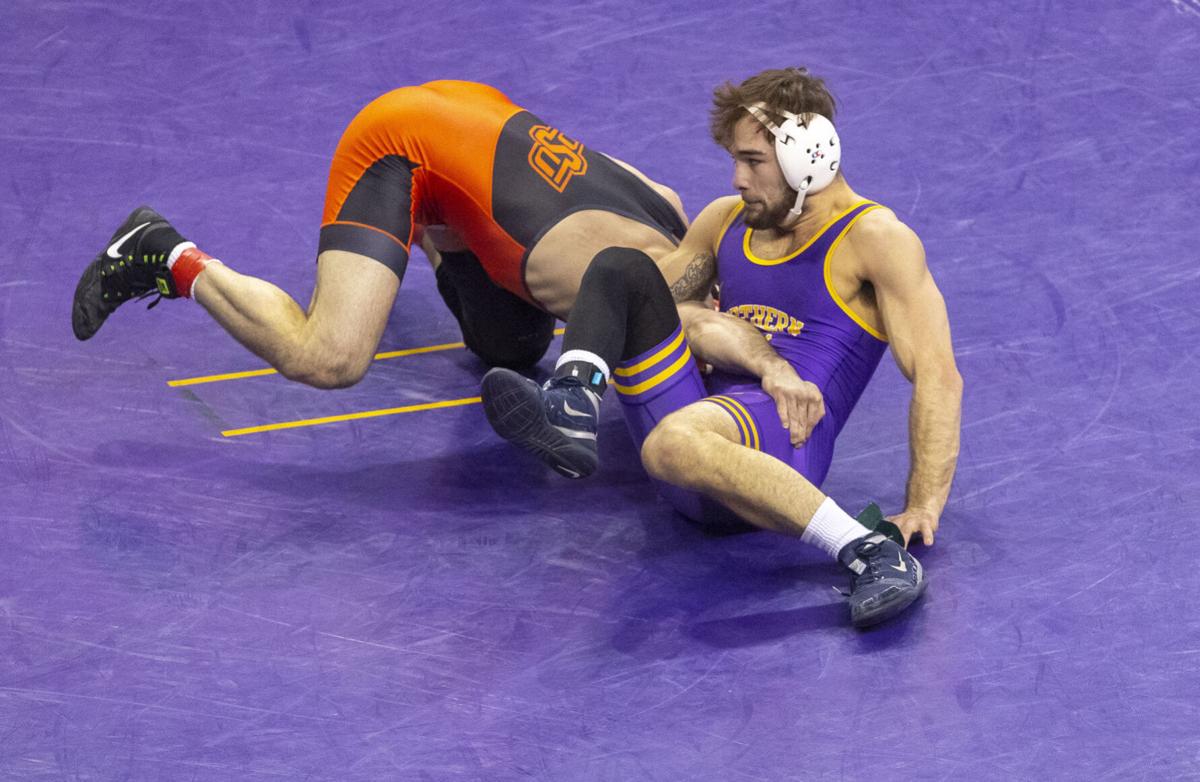 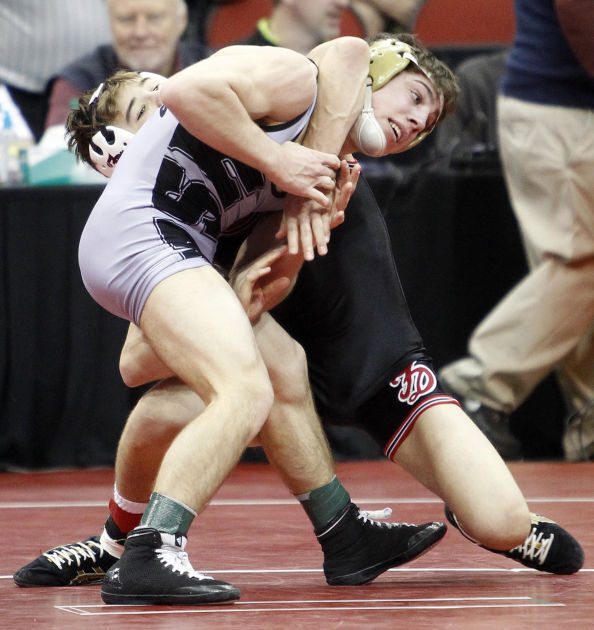 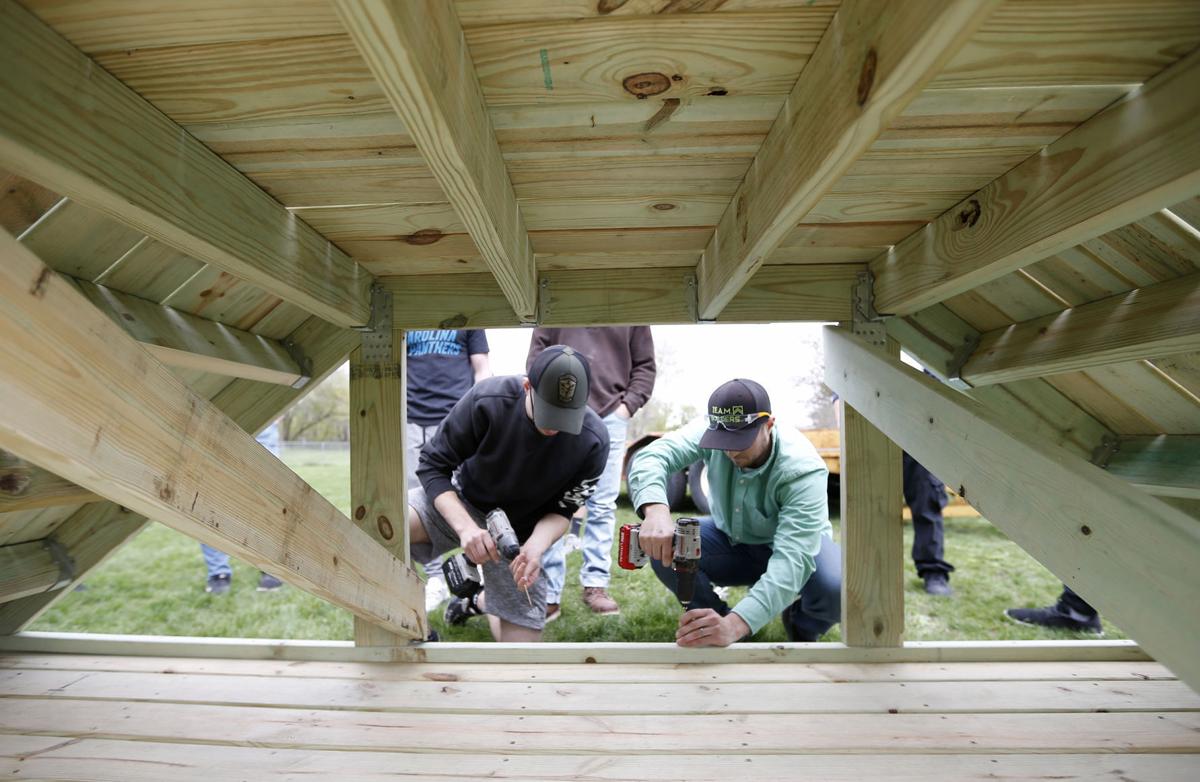 Cayd Lara, left, and UNI Construction Resources instructor Austin Magginis fasten down an agility A-frame for dogs at Pat Bowlsby Dog Park in Waterloo, Iowa, Thursday, May 3, 2019. It was designed and built by students in the Construction Management and Interior Design courses and donated to to Waterloo Parks and Recreation for Pay Bowlsby Dog Park.

Northern Iowa’s Cayd Lara will be unseeded this weekend at the Big 12 wrestling championships in Tulsa, Oklahoma, at the BOK Center.

He’s got a losing record.

But the betting money is falling in bundles behind the Fort Dodge native to do something big this weekend, because he’s already a winner in life.

Just 18 months ago, Lara wasn’t thinking about competing in the Big 12 wrestling championships. The thought that never left his mind was whether he was going to live the next 24 hours.

UNI"s Schwab finding ways to get it done

Like his college coaching brethren across the nation, Schwab has been trying to find ways to keep closely connected with his athletes and recruit, remotely, new potential Panthers.

“I’ve been battled tested the last year in a half,” said Lara, a redshirt sophomore who will be UNI’s 157-pound entrant at the Big 12 championships. “Not many people have been through what I’ve been through. That just gives me that little edge to just go fight through everything. I had to fight for my life for how many days, weeks, so why not now? Let’s go beat the best guys in the country.”

Lara’s journey away from and back to the wrestling mat was incredible.

The four-time state medalist and two-time state runner-up for Fort Dodge had a strong redshirt season at UNI, posting a 19-7 mark with 13 falls while wrestling unattached in 2018-19.

Ten months since the Panthers had dreams crushed when the NCAA canceled the 2020 NCAA Championships in Minneapolis, UNI will return to the mat for the first time against the Jackrabbits and North Dakota State in Brookings, S.D.

He was poised to make a bigger impact on the Panthers’ lineup in 2019-20 when a medical emergency interrupted his ascension.

From a procedure to a fight to be alive

The summer of 2019 was like any other for Nick, his wife Jamie, and kids Jaydan, Triston and Cayd.

The family had decided to go to Colorado with a group of friends for a late summer getaway before Triston and Cayd headed back to Northern Iowa for school and to begin getting ready for the 2019-20 wrestling season.

The vacation had no sooner started when Cayd woke up sick in the middle of the night. Nick and Jamie took him to the local emergency room where staff ran a bunch of tests and believed Cayd was dehydrated and was suffering from altitude sickness.

“They took an MRI and there was a little swelling around his spleen, but nothing they thought was out of the ordinary,” Nick Lara recalls.

But it nearly cost Cayd Lara his life.

Like his father, Cayd was born with sickle cell anemia, a condition where cells break apart, die easily and leave the person afflicted with too few red blood cells.

Nick had been to Colorado many times and never felt any ill affects. But Jamie knew it was something more with Cayd. The next day she rented a car, and she and Cayd returned to Fort Dodge while the rest of the party finished the trip.

Doctors in Fort Dodge initially felt they could battle Cayd’s reaction with antibiotics. Cayd even started the fall semester at UNI.

But his roommate as well as high school and collegiate teammate Drew Bennett finally convinced him he wasn’t okay after Cayd woke up multiple times in the middle of the night in pain.

“He was so worried about school. He had a couple of tough classes,” Nick Lara recalled.

Bennett brought Cayd home on Labor Day weekend. Cayd was transported by ambulance to the Mary Greeley Hospital in Ames immediately and on Sept. 2, 2019, doctors used a DaVinci machine to assist them in removing Lara’s spleen.

Unfortunately, that was not the end of Lara’s saga.

“I had my spleen removed and after that it was kind of a downhill slide,” Cayd said. “There were so many complications. My family was scared. What was supposed to be a one hour surgery took five hours.

“They drained too much blood. So when I got out of surgery my heart rate was all over the place from 130 to 30.”

Two days and a CAT scan later, doctors discovered Lara had a cut in his small intestines. It was allowing fecal matter to seep into his gut, causing him to become septic.

“That is when the scary, scary stuff began to happen,” Cayd Lara said. “I was transferred into the ICU. I had a staph infection and both my lungs had collapsed.”

“He had tubes all over him. It was wild,” Nick Lara added. “It went from a procedure and maybe a couple of adjustments in his life to a flat out fight to be alive.”

The next two months were pretty much a blur as Cayd spent nearly a month in Ames before being transferred to University of Iowa Hospitals where he spent nearly two more weeks. As treatments began to produce results, U of I staff sent Lara home. He had went from a 178 pound athlete to 141 pounds when he left the hospital.

The whole time, Jamie never left his side.

“She was with him every second of the way,” Nick Lara said.

In fact, Lara had a whole army of frequent visitors.

“It wasn’t fun. There were times sitting in the hospital I was scared I wasn’t going to get out, to say the least,” Cayd Lara said. “But my parents, my grandparents, my siblings, my girlfriend (Tehya), close friend Adam (Fellers), Doug (UNI head coach Doug Schwab) got me through it.”

Ready to let it fly

When his ordeal was finally over, Lara finally allowed himself to think about wrestling. He was cleared in early April, but the COVID pandemic limited his opportunities to return to the mat.

The grind to get back was long and challenging.

Lara persevered and battled and earned UNI’s starting spot at 157, filling the roster spot one weight behind his brother, Triston, the Panthers’ starter at 149.

“He is certainly battled tested in a lot of the right ways. I’m incredibly proud of him and how he has responded. ... I know he is going to go down there fighting.”

Lara says he has gotten better each and every day he’s gotten back on the mat.

“Having Triston around has been a huge confidence booster, and it is still coming back to me every time I step on the mat,” Cayd Lara said. “I see growth every day. I know I’m not 100%, but you know that postseason peak, I can feel that coming together.

“And again, I’m just grateful for every opportunity and it’s onward and upward.”

With two sons wrestling in the tournament, Nick Lara said nothing could prevent him from being in Tulsa.

“It’s amazing to have two sons competing on the same team. We are so blessed,” Nick Lara said. “I’m so proud of them both. But everything that Cayd had to go through to get to here … If I had to crawl there I would crawl.”

A collection of UNI wrestling stories.

Dajun Johnson was originally committed to Old Dominion, but ODU dropped their wrestling program earlier this month, reopening the recruitment of Johnson.

UNI's Schwab gutted for his athletes

Schwab says his guys have left a lasting impression on program

Schwab excited to let Panthers loose on rest of country

Cayd Lara, left, and UNI Construction Resources instructor Austin Magginis fasten down an agility A-frame for dogs at Pat Bowlsby Dog Park in Waterloo, Iowa, Thursday, May 3, 2019. It was designed and built by students in the Construction Management and Interior Design courses and donated to to Waterloo Parks and Recreation for Pay Bowlsby Dog Park. 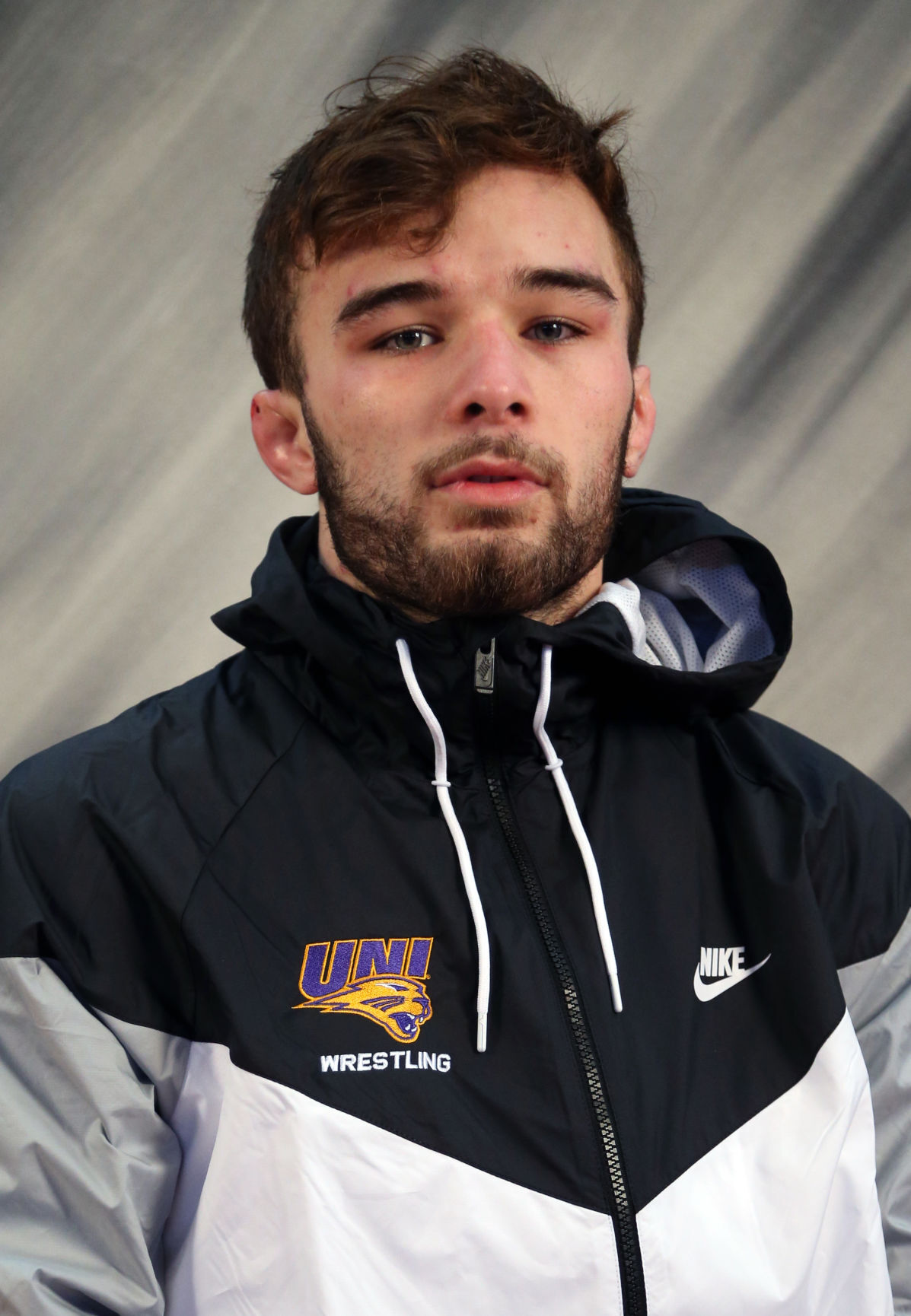