After an incredible finished to the 2020-21 season that saw the Northern Iowa women’s basketball team reach the WNIT semifinals, 15th-year head coach Tanya Warren is expecting more from the Panthers in 2021-22.

UNI returns 13 letterwinners, including three fifth-year seniors – Karli Rucker, Nicole Kroeger and Bre Gunnels – from a 17-13 team and seven of those players have starting experience.

Emerson Green, who started as a true freshman, says that is an important message the Panthers need to take to heart.

“Having that mindset that we are good…we need to show that every day in practice,” Green said. “We can’t let it get in our heads that we don’t have to (think) that. She (Warren) does a good job of making sure we knew we have a good team, but that we also have room to improve and need to make consistent strides.”

UNI lost just one key contributor from a team that lost to Ole Miss in the WNIT Final Four. Megan Maahs, the team’s third leading scorer and second-leading rebounder, graduated.

The Panthers were picked to finish third in the Missouri Valley Conference behind Missouri State and Drake.

“We are asking Karli in her final season to have more of a scoring mentality,” Warren said. “She has earned that. She knows she is capable of it. We need her to have that mindset from start to finish. She sometimes passes up shots that she probably should take.”

Rucker is seventh on the all-time Panther scoring list and should pass Deb Drenth and Starr to move into fifth in the first month of the season.

UNI may have the best 1-2 point guard tandem in the Valley with Rucker and second-year player Maya McDermott of Johnston.

Warren says the 5-foot-5 McDermott has the talent to be one of the best the Valley has ever seen and expects McDermott to come off the bench and provide the Panthers with pace and energy.

“She does a terrific job of making those around her better,” Warren said.

McDermott said after a season that saw her play in 27 of 28 games and average five points a contest that she can’t allow her short stature to deter her.

“I think one of my biggest sayings is having heart over height,” McDermott said. “Just having that heart and going out there and playing hard no matter how big or strong my opponent is and having confidence.”

UNI has plenty of other pieces, too.

Kroeger will be a utility-type player for Warren filling various roles. Gunnels will provide rebounding and strong defense.

Then there are several other players that played significant roles in guards’ Green, Kam Finley, Kayba Laube and Cailyn Morgan.

Cynthia Wolf and Grace Boffeli will handle inside duties for the Panthers.

In all, UNI has eight players returning who averaged between 4.7 and 13.3 points per game.

“We talk about game to game that not everyone is going to be their best,” Rucker said. “So having all these different people that can score, we will have a lot of options to go too.”

Another critical component for success for the Panthers will be finding ways generate points inside.

UNI will continue to run an offense that calls for a lot of three-point attempts. The Panthers have made at least one 3-pointer in 413 straight games, and made 28 in a game against Evansville last February.

But Warren says if UNI can’t find ways to score inside, the Panthers will struggle to reach their full potential.

“Those are things we are emphasizing.”

UNI opens with an exhibition against Truman State on Nov. 2 at home, before playing at St. Louis in its season opener on Nov. 9.

MULTI-BID LEAGUE: Warren fully believes the conference will be deserving of more than one bid to the NCAA tournament come March.

“The MVC is as loaded as it has ever been in my 15 years, top to bottom,” Warren said. “That is extremely exciting.”

“We are the only program in the nation with five players from the same high school program,” Warren said. “That is a tribute to coach Groen (Greg) with how he develops his kids.

“And us, our staff, watching them and building those relationships with those kids from when they were very young.” 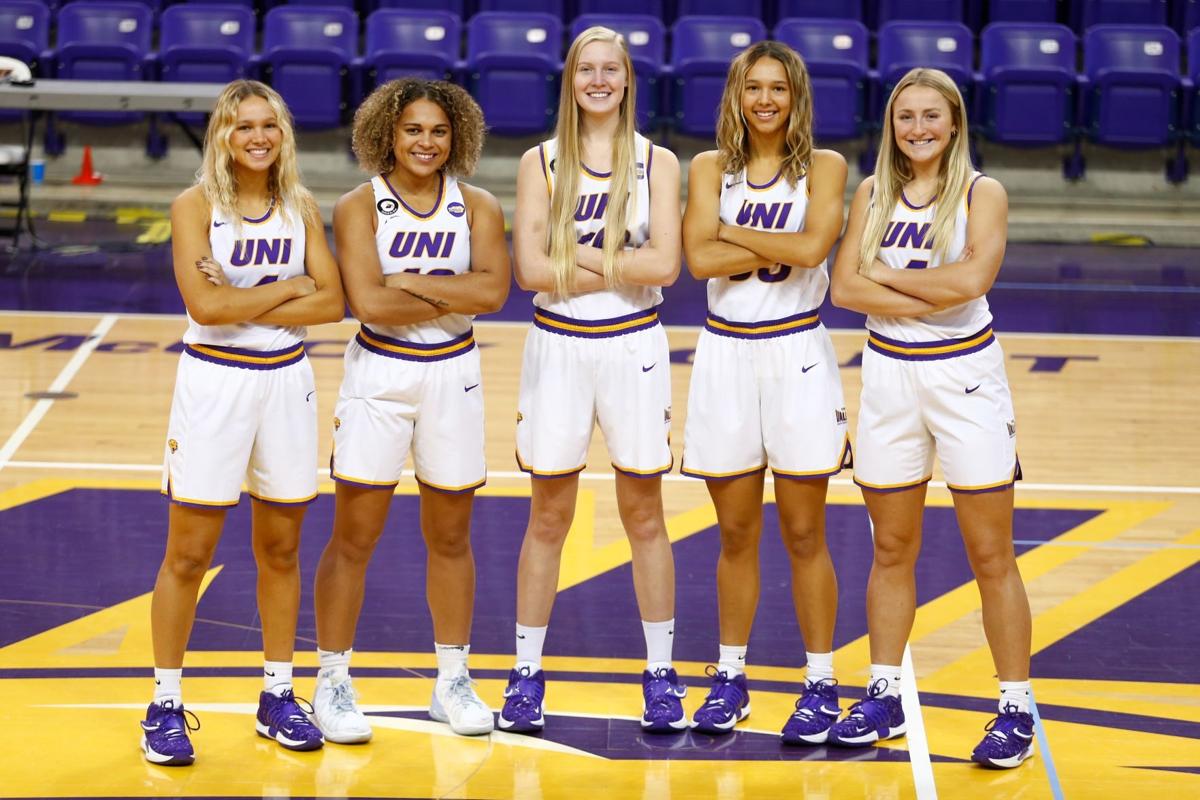 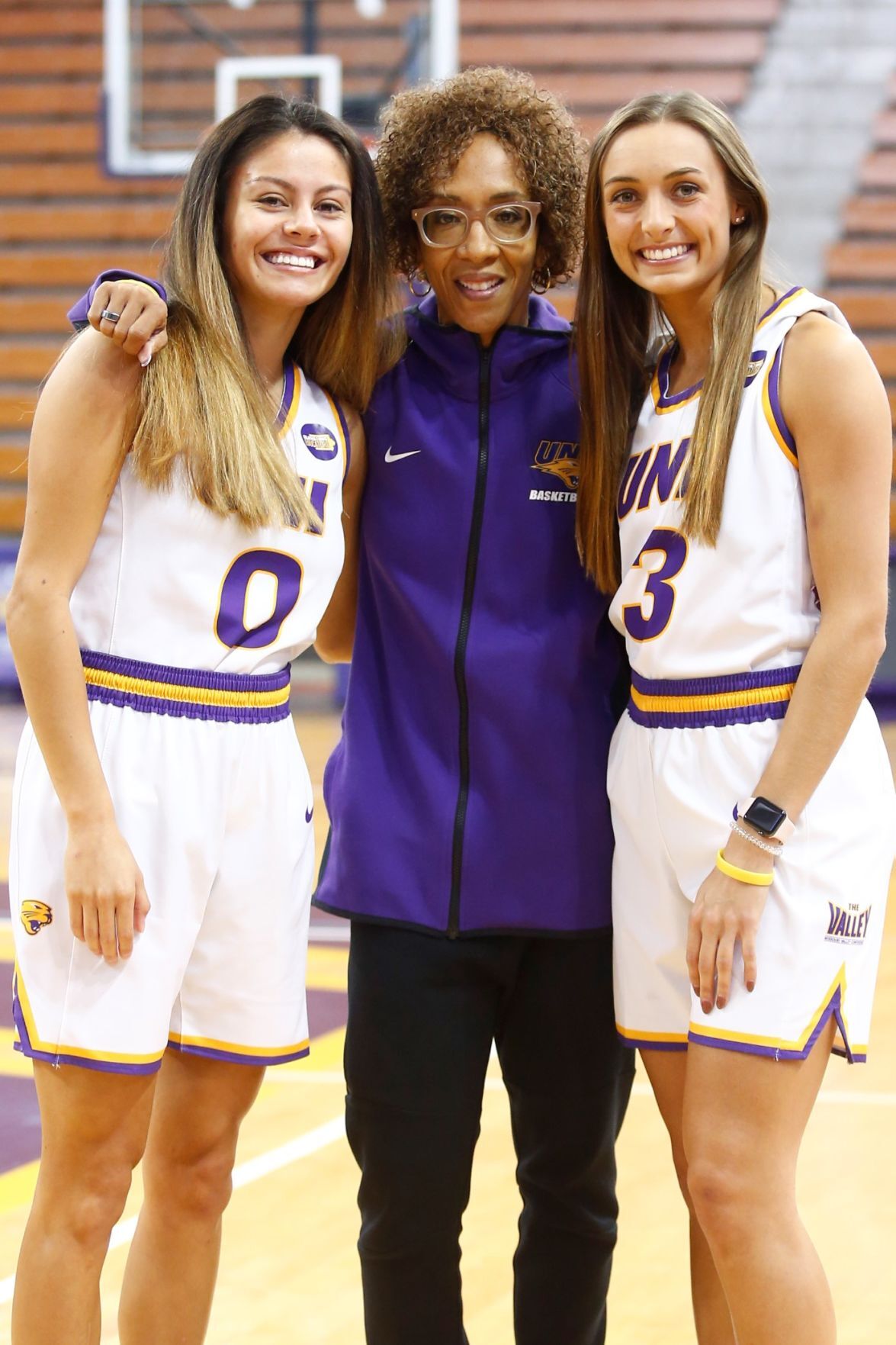 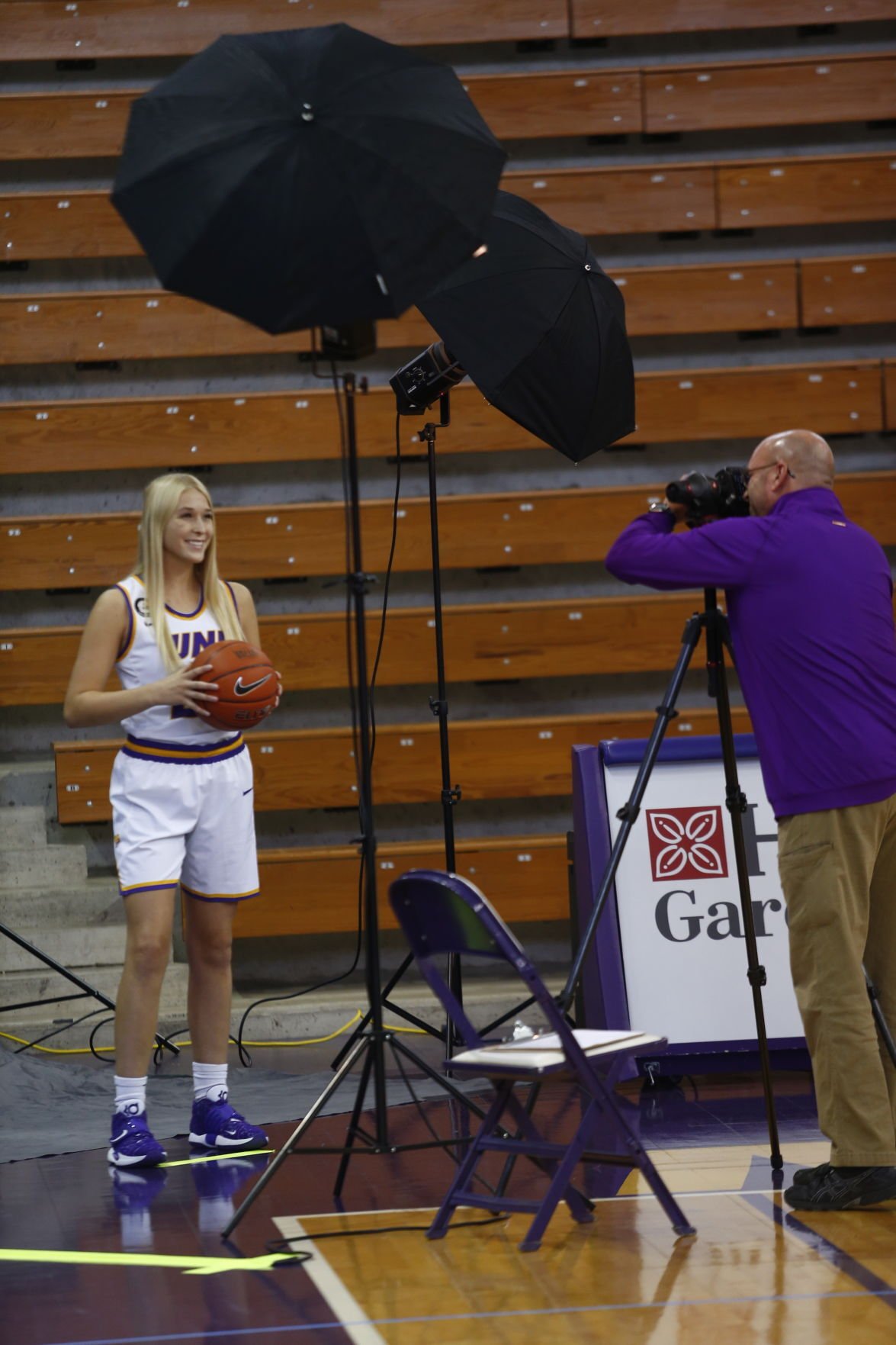 Northern Iowa guard Kayba Laube poses for a picture during the Panthers' annual media day Monday at the McLeod Center. 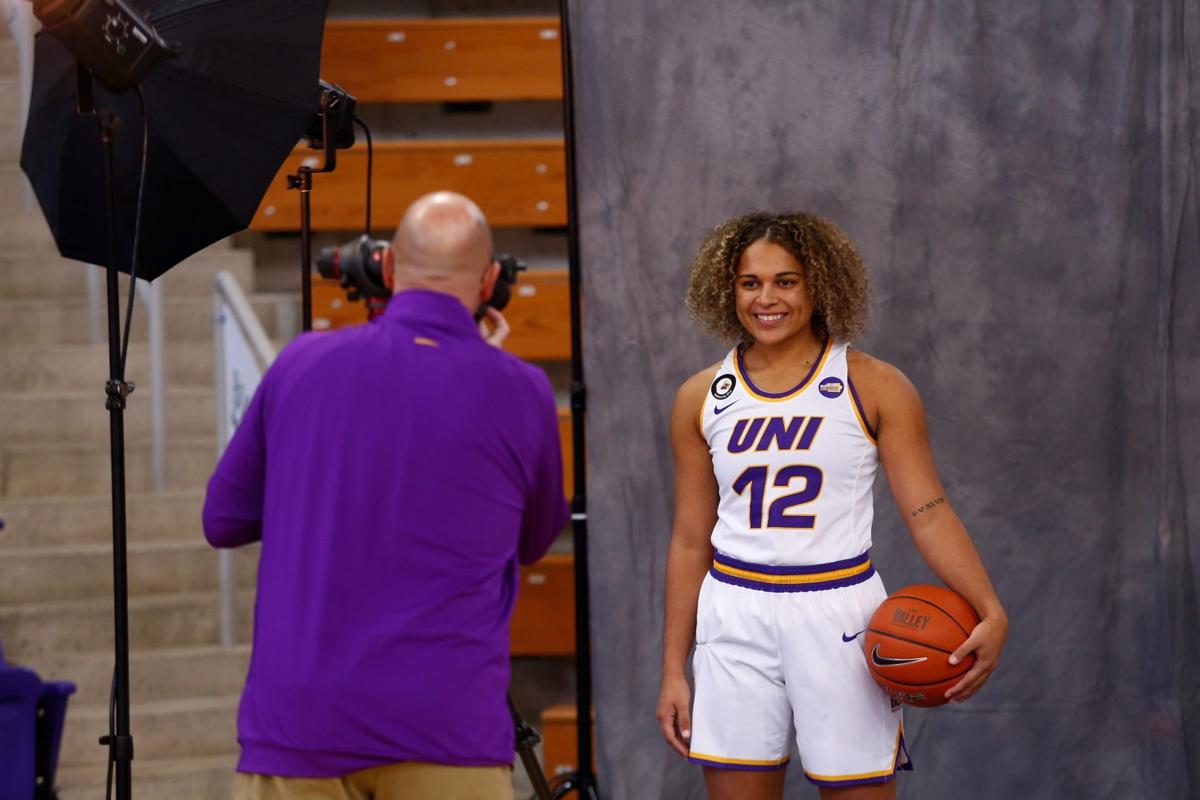 Northern Iowa guard Kam Finley poses for her individual picture Monday during the Panthers' media day at the McLeod Center. 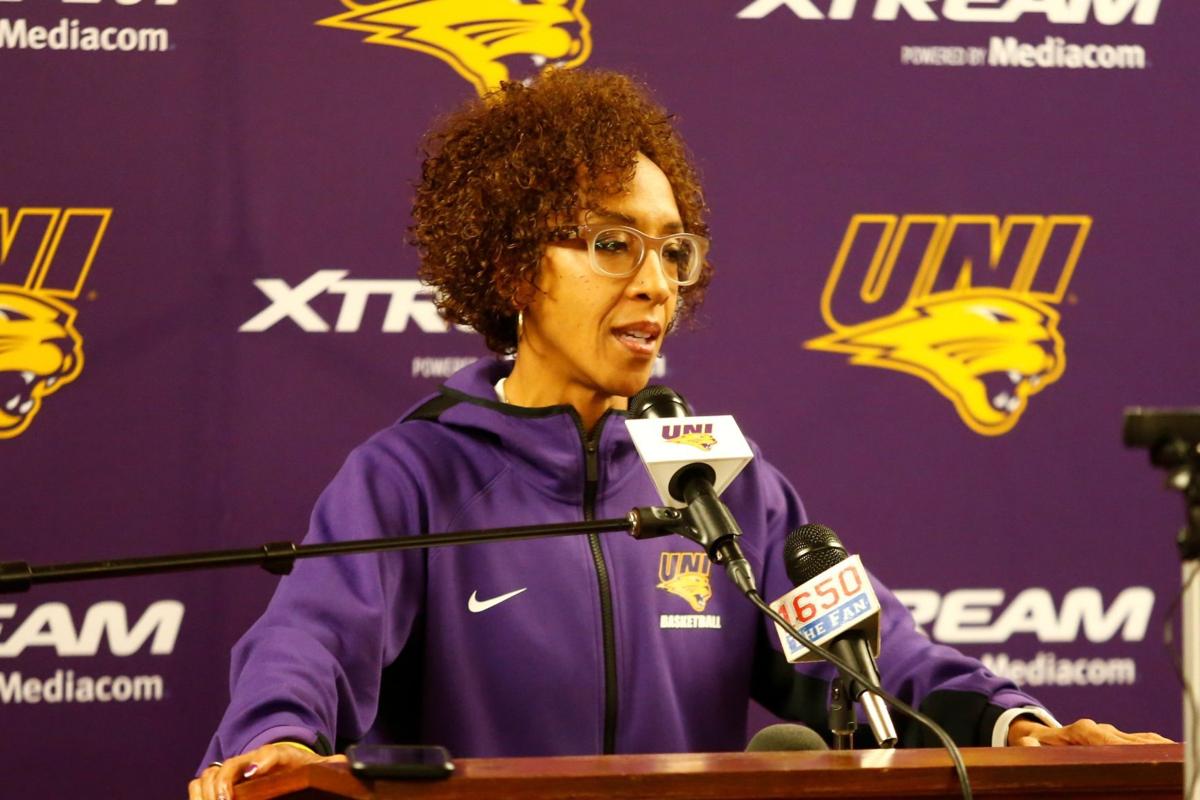 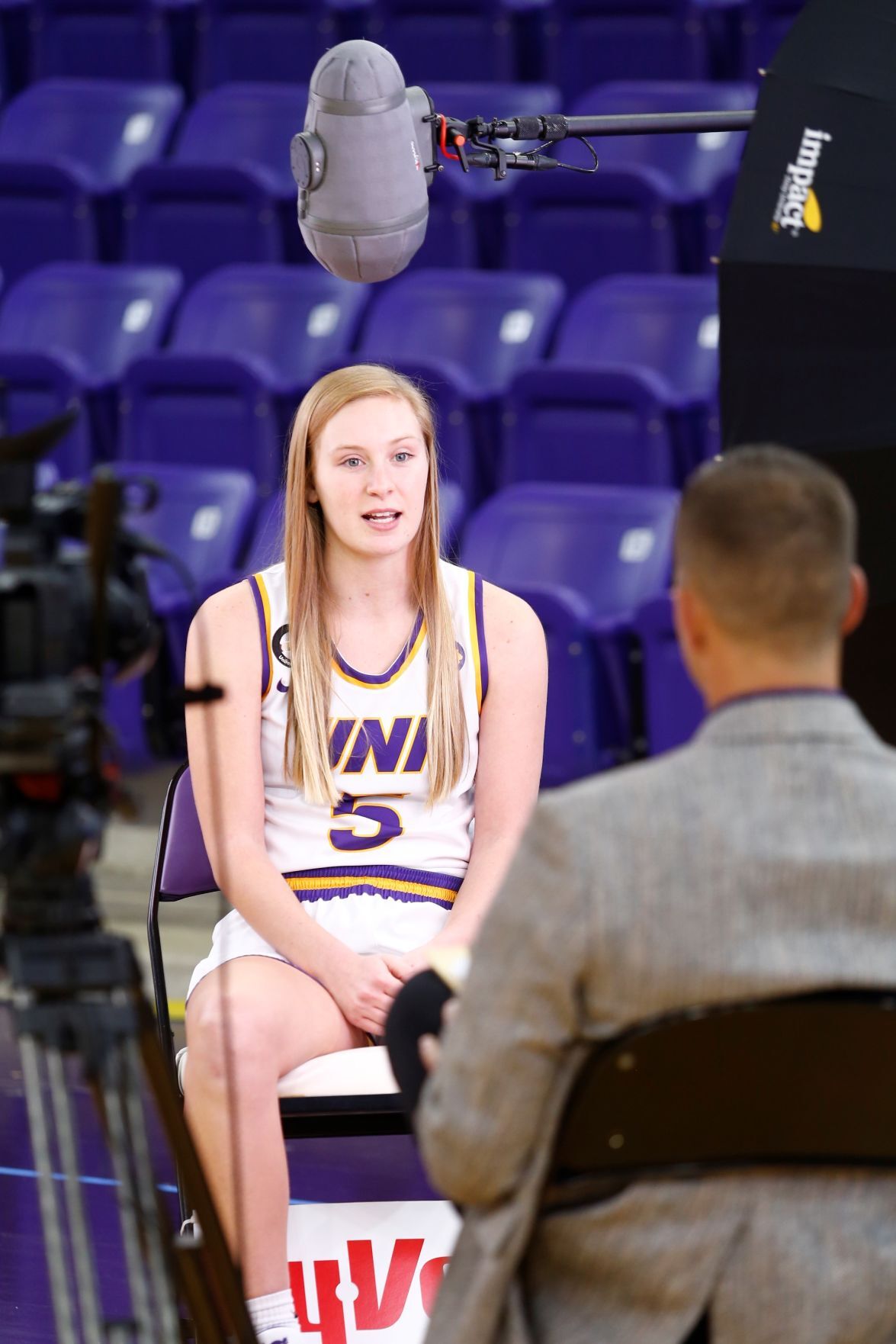