CEDAR FALLS — The first week of Missouri Valley Conference play was a competitive one for the University of Northern Iowa women’s basketball team.

After Illinois State rallied past UNI at the end of the fourth quarter, 66-64, the Panthers secured an 81-78 overtime road win over Bradley.

“Probably the last four minutes (Friday) Illinois State took a page out of our book,” said UNI coach Tanya Warren. “I thought they out-worked us, they out-executed us. That being said, we still had a chance and just didn’t get it done.

“(On Sunday) I thought we could have ducked our heads when they sent it into overtime, but we kept battling, battling and battling, and found a way to win. You’ve got to be able to do that on the road.”

UNI received strong production from freshmen reserves Cynthia Wolf and Kam Finley. Wolf averaged 9.5 points in 13 minutes, while Finley erupted for 15 points Sunday after not playing in the previous game.

“In the nonconference Kam was forcing some things, and I think at this level — especially as a freshman — you have to allow the game to come to you and be confident in doing that,” Warren said. “She was so confident (Sunday) in just allowing the game to come to her and it really started on the defensive end for Kam.”

For Wolf, the next step will be improved physicality and rebounding.

“She’s going to continue to be able to give us good minutes,” Warren said of her 6-foot-3 center. “She shoots the 3 very well. She just has to understand the physicality of the game on both sides of the basketball.”

WRESTLING: UNI will return to conference dual competition on the road after a strong second-place finish at the Midlands Championships.

The Panthers travel to South Dakota State at 7 p.m. Friday and Nebraska at 7 p.m. Saturday. UNI dropped both those duals by 10 points or less a season ago.

Nebraska has seven ranked wrestlers and four All-Americans. West Virginia transfer Zeke Moisey at 125 and 157-pounder Tyler Berger are each two-time All-Americans in the Cornhusker lineup.

“I’m really looking forward to a team effort, where every single guy goes out and fights for his team,” UNI coach Doug Schwab said. “Maybe you beat some guys that on paper you aren’t supposed to. For us to win that dual, we’re going to need to do that.”

Senior Megan Maahs became the 26th member of the 1,000 point club when she scored on a lay-up with 8 minutes and 24 seconds left in the fourth quarter, and the victory was head coach Tanya Warren’s 250th career win.

Balance defined UNI's offense on a day in which the Panthers scored at least 24 points in three quarters.

Missouri State’s lengthy defenders collapsed on Northern Iowa inside and the Panthers struggled early and late to connect from the perimeter during a home loss Friday night.

Bre Gunnels hit a pair of 3-pointers as part of a game-high 18 points and four starters scored in double figures.

Through tragedy and a relentless work ethic, Kansas City native Bre Gunnels hasn't taken anything for granted during her pursuit of a professional basketball career. 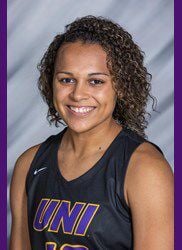 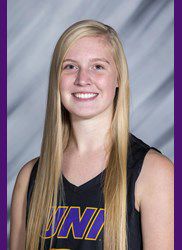