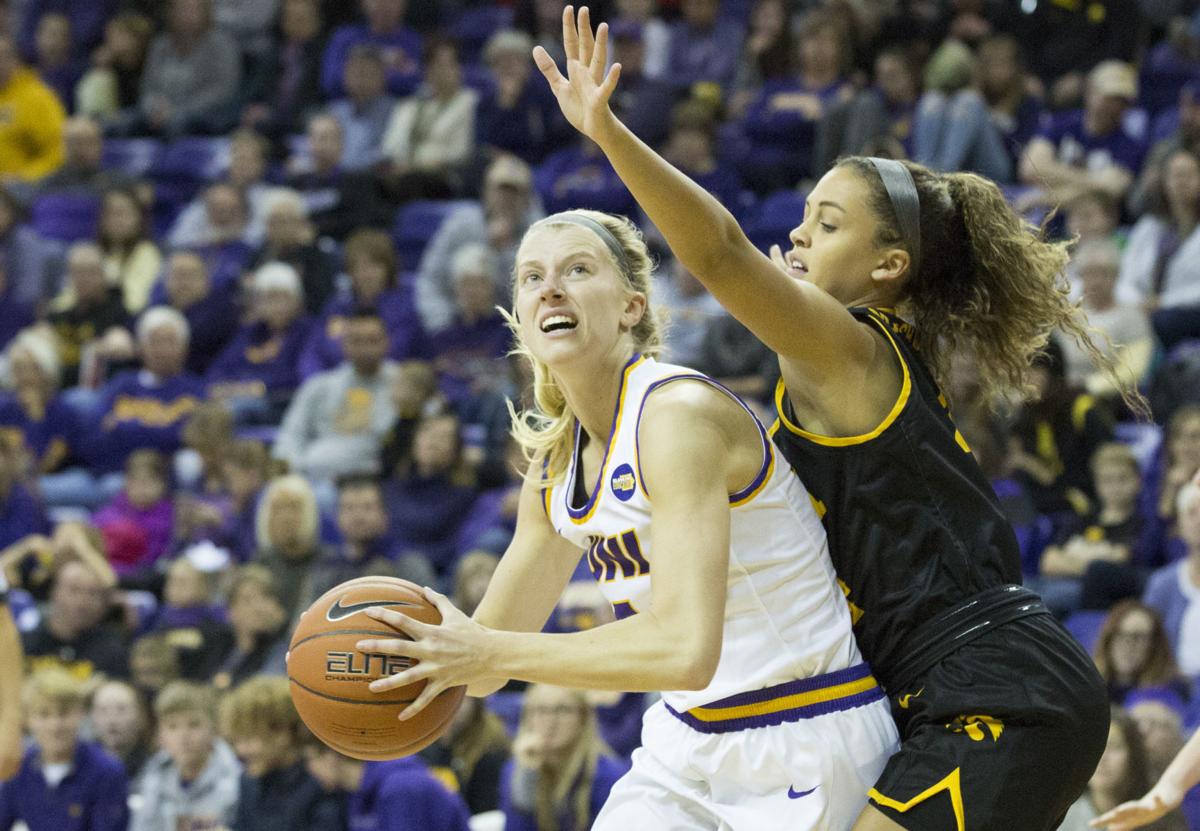 UNI senior Abby Gerrits looks for a shot around Iowa's Gabbi Marshall during a game earlier this season in which the Panthers prevailed, 88-66. 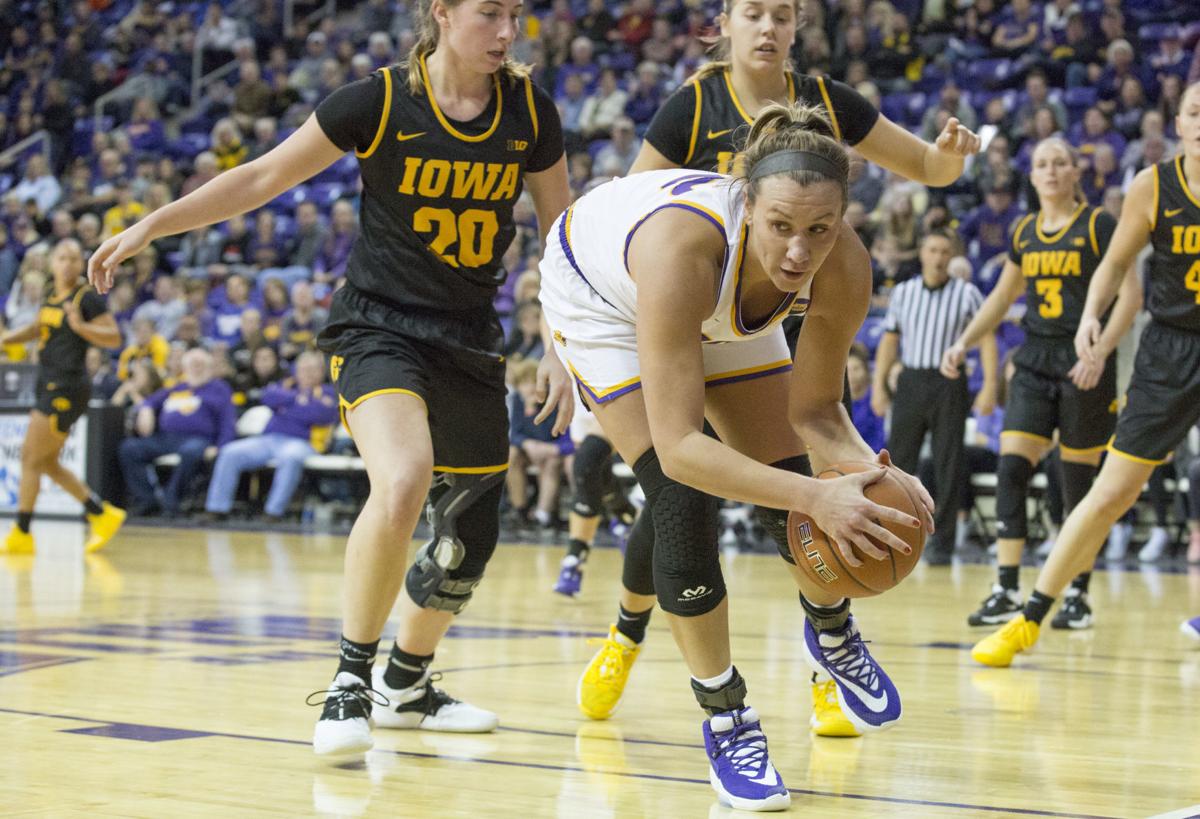 UNI senior Heidi Hillyard saves a ball from going out of bounds during a nonconference win over Iowa.

The Panthers were riding high off their most recent win and ready to compete against the toughest field of Missouri Valley Conference tournament teams that Warren has encountered during her 13-year head coaching tenure.

The Missouri Valley Conference canceled its tournament prior to the start of its play-in round, joining other leagues across the nation. It was a possibility Warren first feared would come to fruition after going to sleep Wednesday night knowing that the NBA had postponed its season after a player had contracted COVID-19.

UNI held its regularly scheduled practice at 9:45 a.m. Thursday in Moline, Ill., followed by an 11:45 a.m. shootaround. A joint committee of MVC tournament decision makers met at 12:30 p.m. and decided to follow the precedent set nationally.

“You’re at shootaround and you find out some of the Power Fives are canceling their tournaments,” Warren recalled. “Honestly after that it’s just a domino effect. At that point you’re still hopeful, but deep down you know there’s no way that we could still have our tournament with everybody canceling around us.”

A UNI faculty rep informed the team that the tournament was canceled at the end of its shootaround. Panther senior Rose Simon-Ressler had finished her final trip to Moline’s TaxSlayer Center by netting a half-court shot.

“They’re heartbroken, especially the seniors, but we talked a lot about the controllable,” Warren said. “It’s a lot bigger than us. Unfortunately we’re not able to continue on, but we can certainly look back at a lot of memory-making moments, one certainly being last Friday, and not lose sight of all the good things that took place all season.”

The moment on Friday that Warren referred to was a regular-season ending 91-78 win over Drake inside the McLeod Center. UNI not only snapped a nine-game losing streak to its likely NCAA tournament-bound rival, but the Panthers also completed wins over Iowa, Iowa State and Drake in the same season for the first time in program history.

While UNI would have had a chance to continue postseason play in either in the NCAA tournament or WNIT, the Panthers’ final win still marked a fitting ending.

“You don’t know that was going to be the finale,” Warren said. “But if you could write a script and have an ending to play an opponent like Drake… and you’re battling there and to finish that out for your seniors, you couldn’t ask for anything better.”

“The consistency in which they helped this program win year-in and year-out and the sacrifices they made — not only what they did on the court, but in the community and the classroom speaks volumes,” Warren said. “Then you get a graduate transfer in Kristina who really took a chance on the unknown and fit in perfectly.”

After UNI’s team returned to Cedar Falls on Thursday, Warren told her players to enjoy their spring break and spending time with family. They’ll take care of classes online and plan to reunite on campus as soon as it’s a possibility for an end-of-season team dinner.

As for what she wants the young women in her program to take away from an unprecedented finish to a season, Warren responded, “You have to enjoy every single day because you just don’t know.

“Every day is an opportunity, but more than anything else, just continue to control the things that you can control and find good in everything you do every single day. Life is unpredictable and you just don’t know.”

Loyola's run to the 2018 Final Four instead of a first-round loss gave UNI approximately an additional $656,000 over six years.

UNI senior Abby Gerrits looks for a shot around Iowa's Gabbi Marshall during a game earlier this season in which the Panthers prevailed, 88-66.

UNI senior Heidi Hillyard saves a ball from going out of bounds during a nonconference win over Iowa.