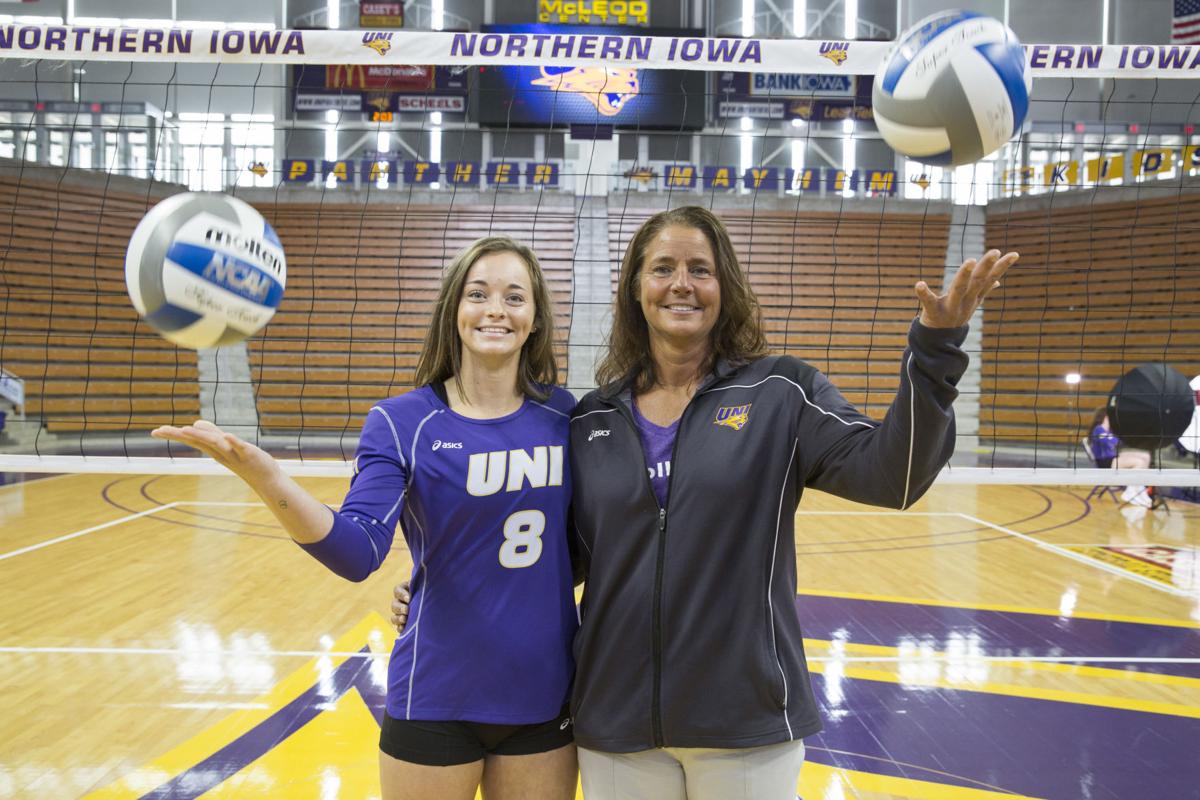 UNI libero Baylee Petersen and head coach Bobbi Petersen posed together for a photo during the Panthers' 2019 volleyball media day. Baylee is one of Bobbi's four daughters active in the sport of volleyball. 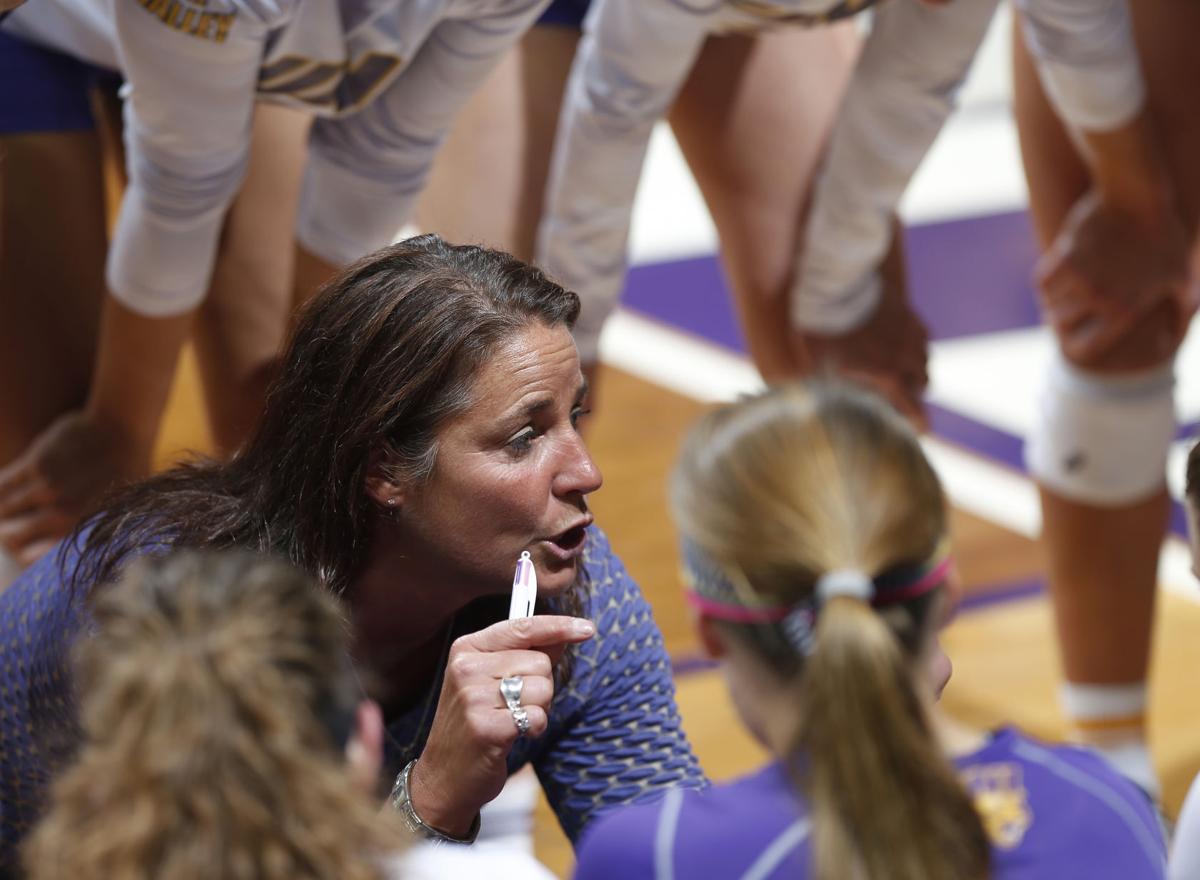 Northern Iowa head coach Bobbi Petersen speaks to her team during a timeout during a 2016 match against Iowa State inside the McLeod Center.

“Kim and I were just sitting and reminiscing,” Petersen recalled. “I said, ‘You know what? You’ve been a part of every single one of those wins, as well, whether it was as a student-athlete or graduate assistant.’ Kim has put her heart and soul into this program.”

And Petersen’s numbers remain impressive. She ranks eighth among active NCAA Division I volleyball coaches with wins in 75% of her matches over 21 seasons.

UNI’s coach credits her success to the support of her coaching staff, school administration, fans and the athletes that have left their own mark on the program.

In between matches at Evansville, Petersen had numerous friends from each of those groups reach out with meaningful messages of congratulations.

“There’s a tradition here that has been built over a lot of years that encompasses so many people,” Petersen said. “That’s why it’s special. It’s really not about the number of wins, it’s about the people.”

A former star high school athlete from Cedar Falls’ neighboring community of Dike — a town where she still resides — Petersen’s legacy at UNI spans over three decades. She amassed 1,611 career kills and 1,457 digs as a skilled on-court leader in the late 80’s before working as an assistant for the legendary Iradge Ahrabi-Fard, who compiled a 503-142-2 record at UNI.

“Everything I’ve learned about the sport of volleyball and how to coach, most of that has come from him,” Petersen said. “We’re probably really different personality-wise, but I have been able to take so much from what he has taught me.”

Previous MVC coaching legends Linda Dollar at Missouri State, Julie Morgan at Illinois State and Melissa Stokes at Missouri State were among some of the other coaches Petersen looked up to near the start of her successful career.

Family has also played a significant role in Petersen’s success. Her sister, Michelle Bolte, competed for the Panthers and is now in her 19th season as the volleyball program’s director of operations.

The opportunities her daughters have enjoyed within a supportive small town are a major part of why Petersen says she has never accepted a job offer from another program.

“Having that hometown, everybody has your back type feeling, I love that,” Petersen said. “I think that’s what UNI represents, as well. That’s one of the biggest reasons why I’ve wanted to stay at UNI is because that’s a part of my value system.”

Baylee Petersen points out that UNI’s volleyball program has always felt like one big family. Born one year after her mom became the Panthers’ head coach, Baylee says former Panthers were childhood role-models, and she still looks up to her current teammates at the school.

“Why would you want to move if the program is so close to your heart and you’ve put everything into it?” Baylee points out. “I feel like the community itself is intertwined. It feels like a family.”

While Baylee admits her freshman year was a little weird at first not really knowing how to act in practice, the junior and her mom/coach have figured it out.

Bobbi admits she may be a little harder on Baylee in practice because she wouldn’t want it to error on the other side. Baylee says Bobbi Petersen the coach isn’t that different than the woman she knew before stepping foot on UNI’s campus as a student-athlete.

“Honestly, I think she coaches like she’s my mom,” Baylee Petersen said. “By that I mean she’s always going to be there for everybody on the team. She treats the team like her own daughters.”

Baylee added the milestone her mother has reached is indicative of the time she’s invested in her craft.

“As a coach you worry about the hours you’re away and it takes a special family to handle some of those things,” Bobbi Petersen said. “I think the plus side is just the interactions that your kids get to have with amazing young role-models.”

Milestones wins or not, Bobbi says she’s enjoyed working with her daughter at the collegiate level.

“I didn’t have the opportunity to coach my kids as they were growing up, which I kind of wish I would have,” Bobbi Petersen said. “So just having this opportunity to have kind of a different role in Baylee’s life, I think it’s been extra special.”

The daughter of former Dike football coach Joe Becker, Bobbi Petersen still continues to receive advice from the first coach that she admired.

“When I first started, his biggest comment to me was, ‘You’re going to want it more than some of your players. You have to find a way to balance that and figure that out,’” Bobbi Petersen recalls, addressing her father’s coaching advice. “That has definitely rang true. You can’t make people want to do something they don’t.

“I can’t even begin to go through the number of things that he has been able to help me with over the years. … It’s a different sport. I’m coaching females. He coached males. But there’s so much carryover that I’ve been able to use either fully or in some kind of way. He has always been there. I don’t know how I would have done some of the things over the years or gotten through some of the situations without his perspective and guidance and advice.”

Reflecting on her coaching career, Petersen points towards two things that have been most gratifying. The first, being able to be a part of young women’s lives, including growth that transcends athletics to their occupation, families and communities. The second, the challenge of taking a new team each year and figuring how that group is going to reach its potential on the court, in the community and in the classroom.

“There’s been a tradition here that has been built over a lot of years that encompasses so many people,” Bobbi Petersen said.

UNI needs to be consistent to beat Drake

UNI will host Northern Illinois Saturday in an exhibition match at the McLeod Center at 3 p.m. Fans are welcomed to attend.

The 2019-2020 UNI volleyball team was introduced Thursday to the media.

UNI libero Baylee Petersen and head coach Bobbi Petersen posed together for a photo during the Panthers' 2019 volleyball media day. Baylee is one of Bobbi's four daughters active in the sport of volleyball.

Northern Iowa head coach Bobbi Petersen speaks to her team during a timeout during a 2016 match against Iowa State inside the McLeod Center. 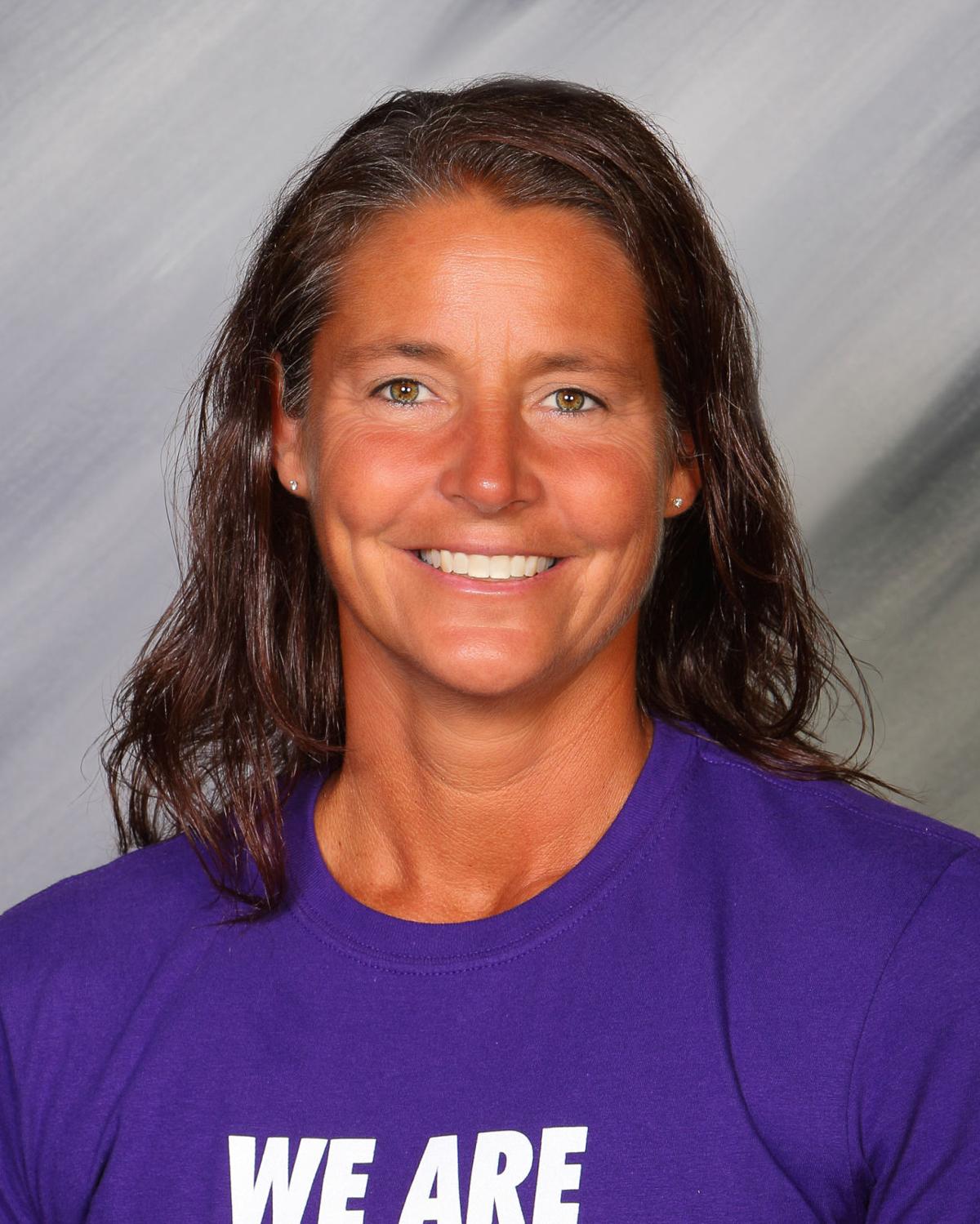