The Panthers clicked in the opening set with 16 kills on 29 attacks for a .414 hitting percentage, the second highest team hitting percentage in a set this season. UNI added four service aces and one block in the frame.

Carly Spies tied a back-and-forth second set at 21 with a kill before UNI took a 2-0 match lead after Southern Illinois committed four attack errors over the next six points.

UNI trailed 13-9 in the third set before closing strong.

Inga Rotto’s 11 kills on .500 hitting led a UNI team that recorded 39 kills at a .258 hitting percentage. Setter Tayler Alden tallied 36 assists and libero Baylee Petersen led the back row with 13 digs as UNI held Southern Illinois to a .170 hitting percentage.

One day after suffering a 5-2 defeat to Omaha, the UNI tennis team split its six singles matches during a 4-3 loss in a rematch with the Mavericks inside Waterloo’s Black Hawk Tennis Club.

Omaha again swept the doubles point. UNI then made a comeback in singles play. Emma Carr and Valentina Caro won straight-set matches for the Panthers and UNI’s Thaissa Moreira prevailed in a third-set tiebreak.

Omaha also won a pair of singles matches in straight sets and the Mavericks secured a match-clinching set three tiebreak victory from Addison Miller at No. 6 singles. 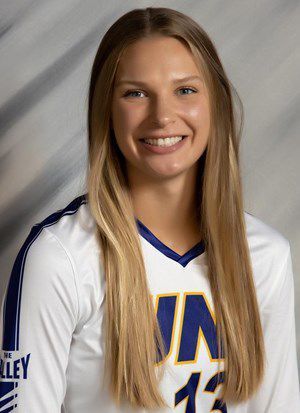