UNI played without senior standout Karlie Taylor, who was injured Saturday in a win over Indiana State.

The Panthers (9-8 overall, 3-0 Valley) trailed 15-10 in the first game, but rattled off a five-point run to get back into the game. Then with the game tied at 21, a block by Seehase and Emily Holterhaus and another block by Arndorfer and Holterhaus sparked a 4-0 run to give game one to UNI.

UNI led from start to finish in game two, closing on a 5-0 run, and in game three, the Panthers closed on a 9-3 run after the score was tied 17-all.

UNI returns to action Friday at Missouri State and Saturday at Southern Illinois.

Sacquitne shot rounds of 72 and 78 and is eight strokes back of Loyola’s Nate Vance with 18 holes to play.

UNI stands ninth with a two-round score of 619.

Kaylissa Arndorfer recorded a career-high 18 kills, guiding UNI to a perfect opening weekend of MVC play with a four-set win over Indiana State.

The Northern Iowa women’s tennis team has a big weekend at home beginning Friday when the Panthers host the 2019 Missouri Valley Conference individual tennis championships at the Byrnes Park Tennis Center in Waterloo.

College football: UNI will be without top two tight ends against Youngstown

At the beginning of the season Northern Iowa head coach Mark Farley felt he had the best tight end in the country in all-American Briley Moore. 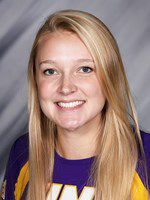