CEDAR FALLS – Northern Iowa moved one win away from clinching the Missouri Valley Conference regular-season title after beating Southern Illinois, 22-25, 25-18, 27-29, 25-21, 17-15, in a Friday night nail biter at the McLeod Center.

The Panthers improved to 23-6 overall and 16-0 in the MVC with victory. UNI hosts Missouri State Saturday with a chance to clinch the MVC regular-season crown outright with a win.

Friday’s win clinched at least a share of the title.

“The tough part is we’re playing teams now that just have absolutely nothing to lose and I just thought Southern came in absolutely fearless,” UNI head coach Bobbi Petersen said. “They were bombing their serves – really aggressive attacking.”

The first set seemed to be in the bag for UNI as it got up to a seven-point lead at 20-13, but Southern Illinois rallied back with 11 straight points to pass them up, taking it 25-22. The Panthers answered back in a fierce second set, with both teams playing tug-of-war for the lead and tying up the score nine times before UNI passed up the Salukis at 13-12. This time, the Panthers didn’t relinquish their lead, finishing the set 25-18.

Carly Spies added 13 kills, while Kira Fallert and Inga Rotto had 11 and 10 respectively.

Sydney Petersen had 24 digs and Fallert 20, while Rotto had eight block assists, and Spies and Alden six apiece.

After Southern Illinois grabbed a two set to one lead with a thrilling, 29-27, win in set three, UNI took an early 5-4 in the fourth set and held it throughout to force a fifth and deciding set.

In the final set, the lead see-sawed again with Southern Illinois one point away from winning it all, but UNI tied it up at 14 points, then clawed forward. Tied again at 15, the Salukis went out of bounds on a shot and the ensuing challenge was ruled in the Panthers’ favor. UNI then finished it off with a final kill by Spies.

“Taylor was setting me great balls all night, so that was super duper helpful and then obviously, they had to pay attention to our pins because they were playing well too, so I had a one-on-one block and was able to score on it,” Spies said. “But yeah, that was a definite team win. Absolutely.”

The Panthers swept the Aces to advance to 26th all-time MVC final.

Anthony Galvin sends it to OT against East

Study: Caffeine can improve the performance of sprint runners

Study: Caffeine can improve the performance of sprint runners 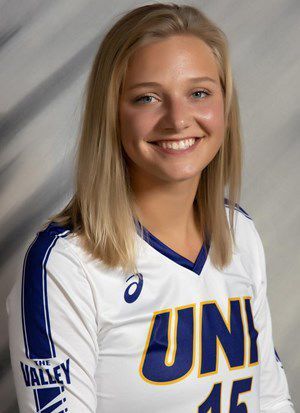