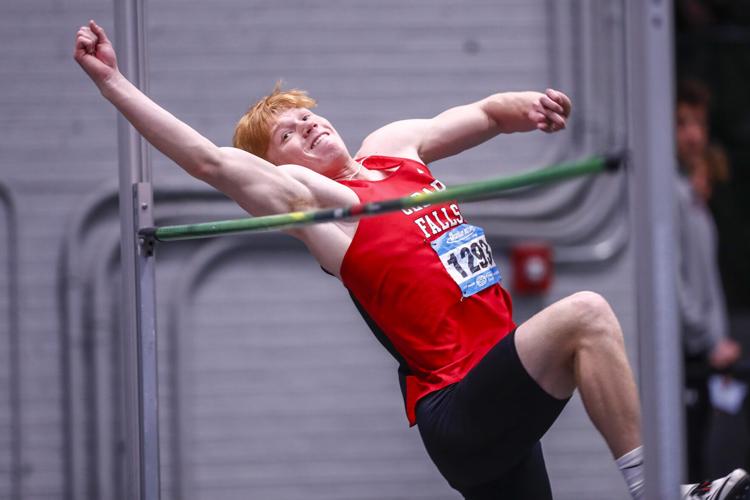 Cedar Falls' Jacob Kieler makes a jump in the high jump during the Drake Relays at Drake Stadium in Des Moines on Friday. 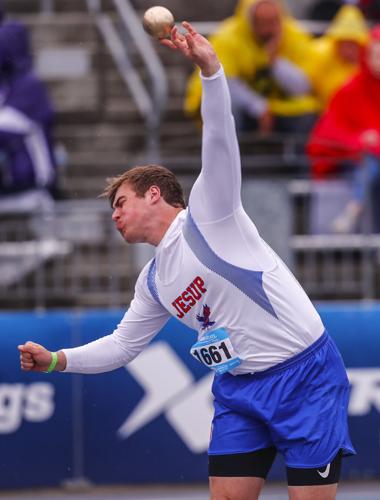 Jesup's Carson Lienau makes a throw in the shot put during the Drake Relays at Drake Stadium in Des Moines on Friday.

DES MOINES — Cedar Valley athletes were counted among some of the best in the state at the Drake Relays.

On Friday, student athletes from eight area high schools joined competition from across Iowa gathered in the pouring rain to compete in one of the largest track and field events in the county.

Starting at the boys’ 110-meter hurdle, Noah Sheridan of Jesup came in fourth in the preliminary at 15.03, qualifying for the finals in the middle of the pack. He would improve his time in the finals with 14.74 seconds to finish fourth there as well.

The University of Northern Iowa had a good showing as well, with Isaiah Trousil and Dike-New Hartford alum Parker Kiewiet coming in first and third in the final men’s 200-meter race. Trousil became the first Panther in five years to win an individual flag at the Drake Relays. He would also come in second at the men’s 100-meter with 10.67 seconds, qualifying for the finals on Saturday.

On the field, Sarah Albaugh finished ninth for Cedar Falls in the girls’ long jump, making it 16’5.75. Denver senior Sydney Eggena failed to qualify for the finals round, but was able to take second in girls’ shot put the night before with a personal best of 42’1.75.

“Yesterday was more my day, I’d say. I came out and crushed shot put,” Eggena said. “And discus wasn’t quite my day today, which is completely fine … and it just means that state will be better.”

“I feel good about it,” Lienau said. “My coach just told me that he thought it was the highest Drake Relays finish at Jesup, which is a great honor because we’ve had a lot of great athletes come through Jesup.”

Cedar Falls junior Jacob Kieler also had a strong performance. Just over two weeks after setting his personal best in the high jump (and a new school record 6 feet, 7 1/2 inches, he went into Des Moines to set it again at 6 feet 9 inches, coming in at second place behind Jack Noble of North Polk. Both were tied at first, with 11 jumps between the two to settle the outcome.

“It was kind of messing with my head a little bit,” Kieler said. “Just thinking, ‘I keep missing this height. I want to get it so bad,’ but just trying as hard as I can to get it each time.”

Waverly's Rail Trail bridges will need to be replaced, repaired in five to seven years

The city of Waverly is responsible for eight bridges along the Rolling Prairie Trail.

Cedar Falls' Jacob Kieler makes a jump in the high jump during the Drake Relays at Drake Stadium in Des Moines on Friday.

Jesup's Carson Lienau makes a throw in the shot put during the Drake Relays at Drake Stadium in Des Moines on Friday.