CEDAR FALLS — A strong weekend at the Wisconsin Open was a positive sight for Northern Iowa track and field coach Dave Paulsen.

This Saturday and Sunday, the Panthers will host the 2019 Missouri Valley Conference men’s and women’s indoor track and field championships at the UNI-Dome.

In the pre-meet poll, UNI’s men were picked to finish second and the women fourth.

“We call it Sunday Fun Day for track on a Sunday because you’ve got points coming in every single event,” Paulsen said. “If you were going to pick a day to come, I’d come on Sunday when some of the best track and field athletes in the country, not just the conference, are going to be in the Dome.

“Hopefully, we will be in the hunt and try to bring home some hardware.”

Paulsen said every point is important, which was evident when the UNI men won the outdoor conference title last spring by one point.

“We have events we are very deep in, very strong in and have to maximize there and do what we are supposed to do,” Paulsen said. “Then we have events where we have guys and girls that are on the bubble and you have to try ... you scrape a seventh here or eighth there and those points add up.”

WOMEN’S BASKETBALL: Despite the loss, Panther head coach Tanya Warren said her team did some good things Friday in defeat at Drake.

Warren liked the way her Panthers responded after falling in a early hole and felt they competed and played defense.

“Overall, extremely pleased with how we competed,” Warren said.

Up next is a Friday home game against Indiana State, an opponent UNI defeated 71-51 on Jan. 27.

“I think our kids understand we are playing to continue to control our own destiny,” Warren said.

UNI is 15-9 overall and 8-4 in the MVC, which is good for third place, a half-game ahead of Illinois State.

Warren said senior guard Ellie Howell was expected to practice Monday and could be available to play against the Sycamores after being injured against Missouri State on Feb. 3.

SOFTBALL: There were a lot of things Ryan Jacobs liked and others to work on after his UNI squad went 3-2 at the Osprey/Dolphin Invitational in Jacksonville, Fla.

“We got a lot of work in, learned a lot and played some really good competition,” Jacobs said.

Jacobs liked the fight and moxie he saw on day two of the tournament, in particular in the Panthers’ 6-5 win over the College of Charleston, a team that had blanked them 4-0 in UNI’s tournament opener.

“Second day we faced off to College of Charleston again, and we were able to do what I’ve been waiting to see this team do,” Jacobs said. “And that was come back. We gave up six-spot in the first two innings and we were able to scrap and claw and play a full seven innings .... and come out with a one run victory.”

WRESTLING: It is rival week and senior week for Doug Schwab and the Panthers.

“Thursday night, come on out and honor those guys,” Schwab said. “Be loud and rowdy, and we will do our part to make sure you are up on your feet a whole lot. “

The Panthers are riding a two-match win streak against the Cyclones, including 31-7 last year in Cedar Falls.

“When you start looking on paper I guess they are favored, but I guess we will wrestle the match, be ready for it and excited about it,” Schwab said. “Excited to have a packed West Gym. Excited to have in-state rival Iowa State.” 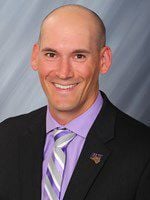