CEDAR FALLS — A flurry of first half tallies proved detrimental to Northern Iowa women’s soccer as the Panthers lost 6-0 to the Iowa Hawkeyes, Sunday.

UNI head coach Bruce Erickson described the matchup as ‘an unusual game’ as UNI gave up all six Hawkeyes’ goals in the first half.

“Goals change games,” Erickson said. “There are moments where we are breaking down…We are doing the opposite of what the situation calls for and we are being punished for it. I feel we have made similar mistakes in other games and have not been punished for it.”

Despite the loss, UNI threatened to take an early lead prior to Iowa’s scoring outburst.

Less than three minutes into the contest, the Panthers earned a corner kick after UNI forward Olivia Knoepfle attempted to maneuver around Iowa defender Kassidy Formanek.

Formanek got her boot on the ball and sent it out of bounds before Knoebfle could get a shot off.

On the ensuing corner kick, UNI forward Ashley Harrington sent a well-struck ball on net which glanced off the top right corner of the Iowa cage. Iowa managed to corral the dangerous rebound and end the Panther’s chance.

“We knew, watching film, that they were a little weaker on the back post,” Harrington said. “That was my original goal was to hit it back post. It curved in and hit the post. It was really unfortunate it did not go in, but it was a good opportunity…That was probably one of our more solid opportunities for the whole game.”

Five minutes later in the eighth minute of the contest, Iowa forward Kyndal Anderson centered the ball to Caroline Halonen in front of the UNI goal. Halonen sent a shot over UNI keeper Caitlin Richards to take a 1-0 lead.

Halonen’s goal opened up the score for Iowa in a big way as six minutes later the Hawkeyes added another tally.

Iowa forward Elle Otto sent a shot on net. Richards got a piece of it but the ball still found the back of the UNI net to give the Hawkeyes a 2-0 advantage.

In the 17th minute of the game, Iowa scored its third goal of the contest as Samantha Cary buried a shot off of a corner kick.

Iowa took a 4-0 lead less than six minutes later as Halonen added her second tally of the game in the 23rd minute.

Hailey Rydberg followed up Halonen’s second goal with another goal in the 25th minute of the game.

Iowa scored its sixth and final goal of the contest in the 32 minute. Rydberg sent a lead pass to Morgan Lietz who chipped it up and over Richards left shoulder.

Trailing 6-0 at halftime, UNI’s defense found its footing and managed to hold Iowa off the scoreboard in the second half. However, unable to find the back of the net themselves, the Panthers lost its third consecutive game.

Harrington described holding Iowa scoreless as a huge momentum boost for UNI despite the loss.

“We had a halftime talk and every got their frustrations out,” Harrington said. “After getting beat down 6-0 that is pretty tough to keep your heads up. I am happy we kept our heads up. We kept working, kept grinding…To hold them off 0-0 in the second half that is a good starting point from a mentality standpoint.”

The loss drops UNI to 3-3-1 at the end of nonconference play. The Panthers open Missouri Valley Conference action next Saturday at 12 p.m. against Valparaiso in Cedar Falls.

Following their third straight loss, Erickson said he told his team they need to find more consistency from game-to-game.

“I still think we are good enough to compete for bigger things in the conference,” Erickson said. “But, we are in a rut and it comes at an inopportune time…S-F-P is sort of our motto. You have to ‘Solve Fricking Problems.’ Right now, we are great at identifying them, but not so good at coming up with solutions.”

With Valpo picked to finish first in the Valley, Harrington said the Panthers will need to be ready for conference play to start.

“We better be ready,” Harrington said. “I am certainly ready. I want to come out and kick some butt.”

Aaron Rodgers has his say on the NFL's greatest ever coach

Aaron Rodgers has his say on the NFL's greatest ever coach 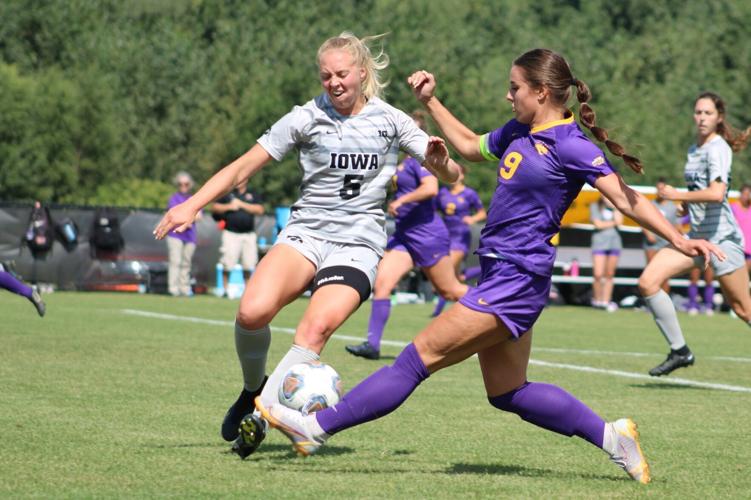 Northern Iowa junior Lauren Heinsch attempts to dribble around Iowa defender Cassidy Formanek during the first half of an Iowa win, Sunday. 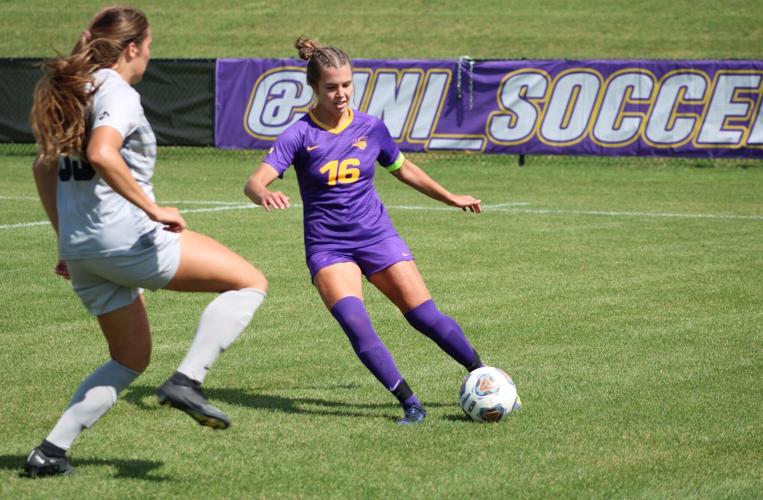 Northern Iowa sophomore Siri Ott boots the ball passed an Iowa attacker during the first half of a Hawkeyes win in Cedar Falls, Sunday.