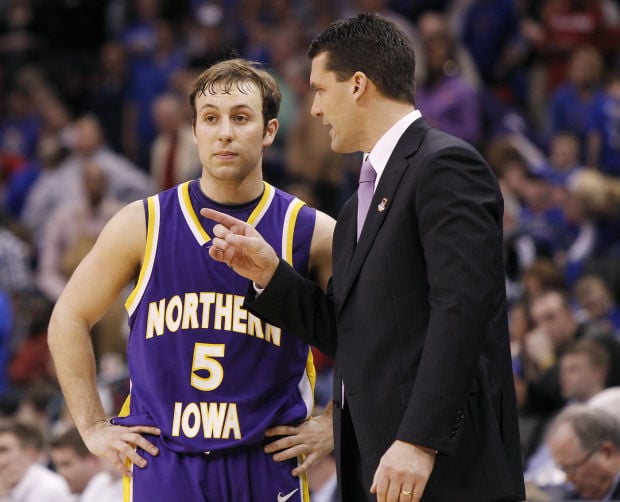 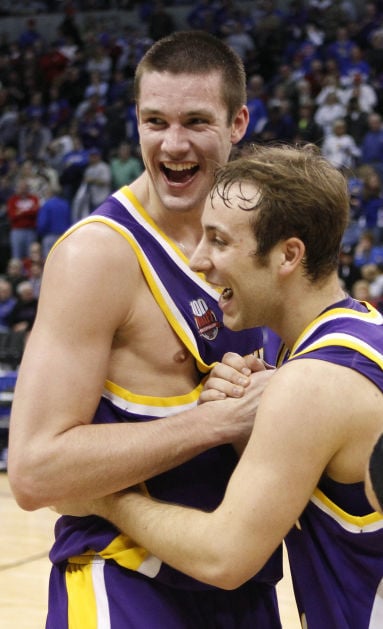 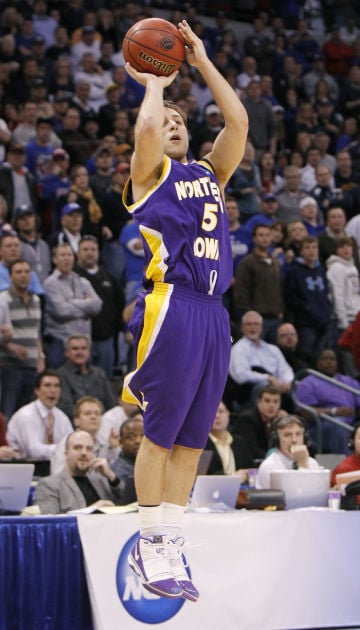 Northern Iowa's Ali Farokhmanesh scores a three to put the Kansas Jayhawks out of reach of the game as UNI wins 69-67, over number one seeded Kansas in a NCAA college tournament basketball game Saturday, March 20, 2010, in Oklahoma City, Okla. 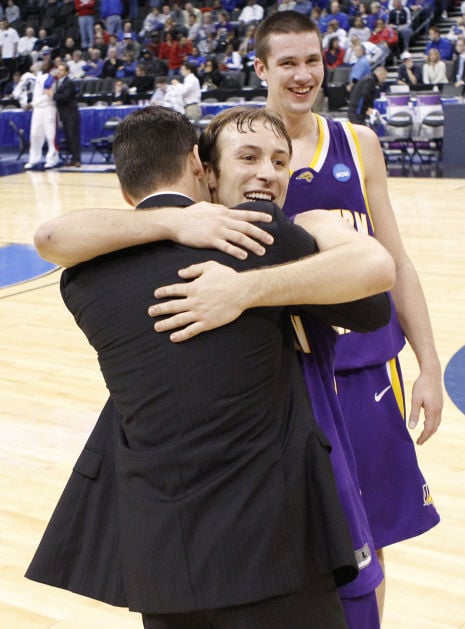 CEDAR FALLS — Coach Ben Jacobson dug into his film vault last fall and dusted off footage from the most memorable game in the history of his University of Northern Iowa basketball program.

It had been years since Jacobson watched UNI’s 2010 second round NCAA tournament upset over top-ranked Kansas. He wanted a refresher prior to speaking at the 2009-10 team’s Sept. 21 induction into the UNI athletics Hall of Fame.

Toughness was the first trait that surfaced from a game that took place exactly 10 years ago on March 20 in Oklahoma City.

“They played every possession like it was the only possession they were going to play in the 40 minutes,” Jacobson recalls.

“Those guys individually and as a group, they wanted to win every possession. You could see it in the way they approached everything they did.”

UNI’s 69-67 victory over Kansas marked the zenith of a rise that began one year prior.

Travis Brown was the lone graduate from a team that tied for the 2009 Missouri Valley Conference title and won the league tournament prior to a five-point loss to Purdue in the NCAA’s first round.

Jake Koch and Anthony James redshirted that year, while incoming freshman Marc Sonnen was set to carve out minutes within an experienced returning cast.

The 2009-10 Panthers won 30 games, climbed the national rankings and were subjects of an in-depth Sports Illustrated feature.

Ali Farokhmanesh’s deep 3-pointer capped a 69-66 win over UNLV to secure the program’s first NCAA tournament victory since UNI’s 74-71 win over Missouri in 1990.

Up next, was the showdown with NCAA blue blood Kansas.

Every single player in Kansas’ starting lineup went on to appear in at least 20 NBA games. Tyshawn Taylor spent portions of two seasons in the association. Xavier Henry played four seasons and center Cole Aldrich had an eight-year NBA career. Twin brothers Markieff and Marcus Morris, then sophomores, are still on NBA rosters.

Speaking with other coaches, Jacobson quickly gained a sense of how fast the Kansas transition offense operated.

“They said it’s going to be faster than what you think watching them on film,” Jacobson related. “That’s where we started our defensive plan was, ‘How were we going to approach going to the offensive boards? And how were we going to make sure we’re back and where do we start that transition defense?’”

Fortunately for UNI, transition defense had been one of the team’s strengths.

Jacobson then shifted his attention to matchups. Panther junior Kwadzo Ahelegbe would be paired with Sherron Collins, one of two point guards in Kansas history with over 1,800 career points and 550 assists. UNI’s 7-foot senior center Jordan Eglseder would cover Aldrich without help.

Beyond that, the defensive game plan came down to identifying Kansas’ top perimeter threats. Jacobson was comfortable with his team’s offense.

“On the offensive side we felt like we could run our stuff,” Jacobson said. “We had to be a little bit more careful in transition offense than I would have probably liked to have been. If you make a mistake in transition offense against them, they’re immediately going to turn and score on you.”

A 2-0 deficit marked the only time UNI trailed against the Jayhawks. Jacobson recalls sophomore Johnny Moran knocking down a 3-pointer in front of the Kansas bench for an early 10-2 lead that forced a timeout.

Two and a half minutes in, the Panthers served notice that they were ready to play.

“It happened fast,” Jacobson said. “At that moment, everyone on our side knew that we weren’t going to go away. It was going to be a heck of a game and we were going to be in position to win that game.”

Eglseder — who entered the contest 1 of 9 from 3-point range on the season — provided a stunning lift when he knocked down 2 of 3 attempts from 3-point range in the first half. The Panthers pushed their advantage to 33-24 on Farokhmanesh’s fourth consecutive made field goal.

“We felt like like Kwadzo using the ball screen would drag Aldrich out and we’d be able to go back to Jordan,” Jacobson recalls. “I didn’t think he’d shoot two of them in the first couple minutes. We thought one and we knew that he’d be open.

“We had other guys that shot and made threes for us. He was very skilled and capable of making them, but we didn’t need him to shoot them during the course of the year.”

Despite shooting 34.5% in the second half, UNI came up with timely plays to preserve a lead that stood at eight entering intermission.

Kansas extended its defense and forced turnovers with traps to get back into the game after Jake Koch’s 3-pointer put UNI up 47-35 with 12:43 to play. A 12-4 run cut the Jayhawk deficit to three with 4:25 remaining, but UNI’s players stepped up.

Adam Koch scored on the block, Moran added a 3-pointer and Adam Koch came up with a big offensive rebound and dunk.

“That, to me, was really impressive,” Jacobson said. “They had the momentum and turned us over a few times and our guys fought it off and came back and made some big-time plays in the offensive end to continue to have that lead.”

Leading by one with 40 seconds remaining, Jake Koch’s pass to Ahelegbe dodged the outstretched arm of a Kansas defender. Ahelegbe then fired the ball over to Farokhmanesh a couple steps beyond the 3-point line.

Typically, the plan would have been to run the clock down and give the Jayhawks a handful of seconds to respond. Yet, when Farokhmanesh’s defender took a step back with Moran sprinting down the far side of the court, Jacobson could sense Ali was going to shoot it.

Farokhmanesh rose up and dealt Kansas a knockout blow. It was a play he made in similar situations during the 2009 MVC tournament and at Iowa State early into the 2009-10 season.

“I think people expect us to say, man, I can’t believe he did that,” Jacobson said. “None of us were surprised.

“He had done it enough times over two years. There wasn’t a teammate or a coach that was surprised that he shot it.”

It’s the type of highlight that remains etched in NCAA basketball lore.

“This kid has been shooting in his driveway his entire life and he actually ends up in the spot,” Jacobson said. “There’s so many young people that put in so much time. How often does it actually end up where you’re in the spot, in the moment like Ali was? There’s no question that he prepared himself for that moment.”

“We did it!” Jim Berry exclaimed from UNI’s bench after the final buzzer sounded.

The man who served as UNI’s coach during its transition from NCAA Division II to Division I was fittingly the first person Jacobson encountered after this milestone victory.

“That’s all that he said,” Jacobson recalled. “He (Berry) wasn’t just referring to what had just happened with us beating Kansas. He was including all the way back to the guys that he coached and the guys that would have come before that.

“To have him there and have that be the first interaction within the first 10, 15 seconds of the game being over was a real program-defining moment.”

Eventually Jacobson finished a series of television and radio interviews and thoughts about UNI’s upcoming Sweet 16 game crept into his mind. He walked into the locker room anticipating pandemonium, but the players threw their coach a curveball.

“The guys are all sitting in their chairs,” Jacobson said. “Each guy in their chair, nobody saying a word. They were just hanging out like nothing is going on, nothing has happened.

“It was a strange locker room to walk into after what had just happened. (Lucas) O’Rear was probably behind it. If I had to guess, he was the one that said, ‘Hey, we’re going to sit here and hang out like we didn’t just accomplish something really good.’ That broke up quickly and we celebrated as you would imagine.”

UNI’s lone Sweet 16 run after five previous NCAA tournament trips changed the outlook on how high to set the bar.

“Once this group did that, the conversation coming out of it then changed to, ‘We’re going to put together a group that can play in the Final Four and win a national championship.’” Jacobson said. “That team moved everything forward in terms of raising the bar from an expectations standpoint. When we played in the Sweet 16, now we sit down with recruits and our players and we talk about why we’re doing the things we’re doing.”

Last fall marked the first time nearly every player on the 2009-10 roster was able to reunite. Jacobson says not much was discussed from the games, but rather the moments they shared in practice and memories from bonds formed over a two-year stretch.

“Most of the things they talked about were their relationships and how hard some of the practices were,” Jacobson said. “I think at the end of the day they embraced those things and knew there was really one track for them to be the best we could be.

“They knew we had good players and they knew we had a good team. There was going to be one track to get there, and that was working and holding each other accountable.”

O’Rear works for Pioneer Seed in the Des Moines area. Austin Pehl is part of ATURA architecture in Clear Lake and Brian Haak works for Tyson Foods in Kansas City.

Then there’s Kerwin Dunham. He works as a Doctor of Podiatric Medicine in Lawrence, Kansas — a place that still hasn’t gotten over what UNI did to their Jayhawks 10 years ago.

The University of Northern Iowa may be able to add a valuable defensive stopper and rebounder to its basketball rotation this season.

Instant volleyball rematches will be the status quo this spring inside the Missouri Valley Conference.

From on the bubble to inside the bubble, UNI basketball season nears

UNI is the preseason favorite within a Missouri Valley Conference that returns plenty of talent.

Northern Iowa's Ali Farokhmanesh scores a three to put the Kansas Jayhawks out of reach of the game as UNI wins 69-67, over number one seeded Kansas in a NCAA college tournament basketball game Saturday, March 20, 2010, in Oklahoma City, Okla.