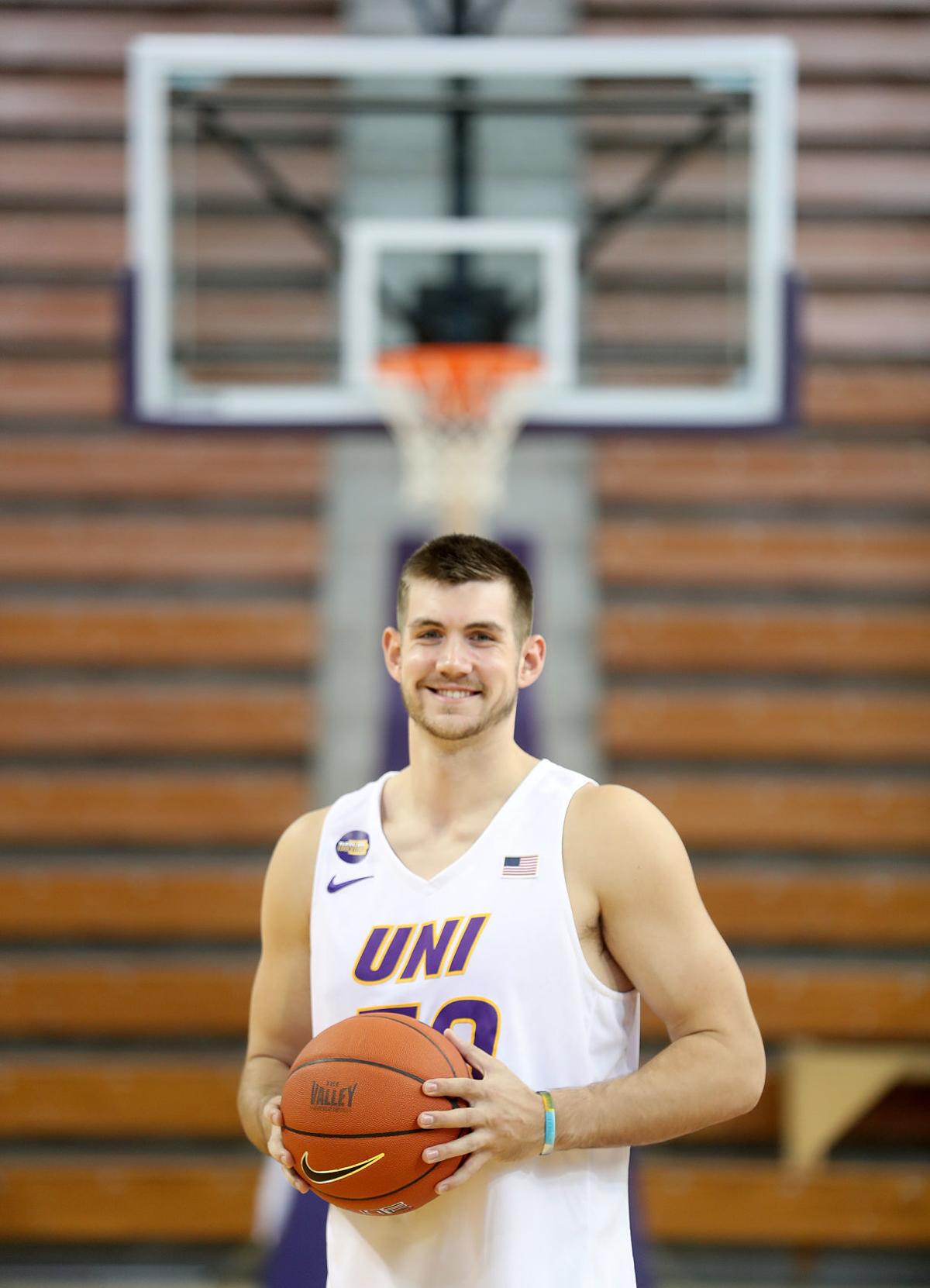 UNI center Austin Phyfe is driven to make the most of every minute in his return to action this season. 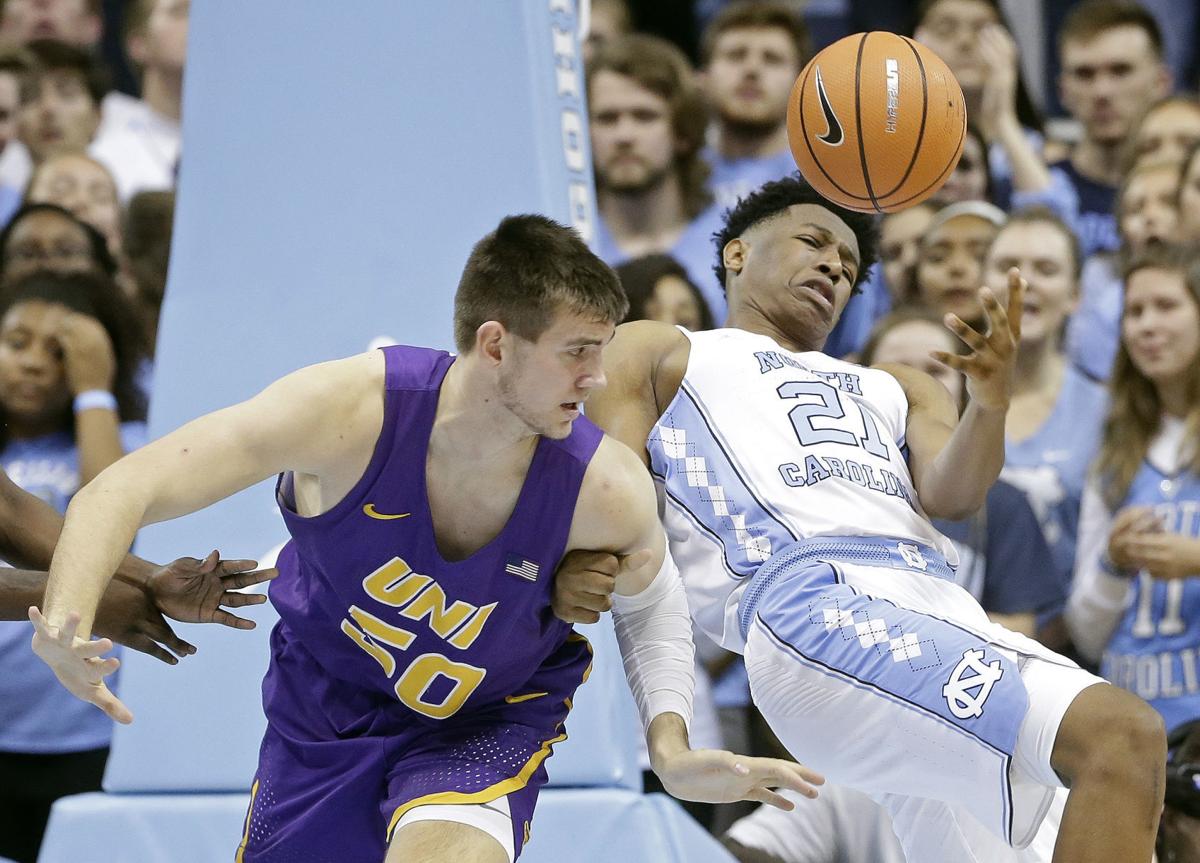 North Carolina's Sterling Manley (21) and Northern Iowa's Austin Phyfe (50) struggle for a rebound during a 2017 game in Chapel Hill, N.C.

CEDAR FALLS — Austin Phyfe is intent on treasuring every moment he spends on the basketball court this upcoming season.

The University of Northern Iowa center is taking a mulligan on his sophomore year after what was supposed to be his breakthrough second season was cut short by reccurring fainting spells.

Following in the footsteps of his father, Steve, who played on UNI’s inaugural NCAA Tournament team, Austin often grew up talking to former collegiate basketball players. They told him they’d trade anything for another second on the court. He never fully realized how quickly a game he loves could be taken away.

“You’ll hear a lot of older people saying that you want to go back and do things once the game is over so make it last, make every second count,” said Phyfe, who was unable to immediately build upon a true freshman season in which he made eight starts and backed up 2018 graduate Bennett Koch. “I had a feeling of that in the sense where I kind of felt like I didn’t know for a second if I would play basketball again. It was kind of scary. Once I got the chance to come back, I wouldn’t take any second for granted.”

At its worst, the Waverly native said he endured a month-plus stretch where he’d pass out up to four times a week with consistent headaches. Phyfe wore compression stockings and took trips to Mayo Clinic in Rochester, Minn., while working with a team of coaches, trainers and doctors to get a better feel for how to treat the condition.

“It’s just one of the best feelings you can have knowing that you’re not alone with this,” Phyfe said. “Coach Jake at the time didn’t even know if I’d be able to play basketball again. Even though he knew he might not ever get me back as a player, he still cared about me as a person.”

Phyfe’s last fainting episode occurred in late December before he made a breakthrough after the calendar flipped to a new year. He eventually was cleared to return to the practice court and spent the final two months of last season mimicking opposing MVC centers on the scout team.

“Going against Phyfe every day is a battle in practice,” said Luke McDonnell, who started all 33 games at center and averaged 26.1 minutes during conference play. “On the scout team he understood who he was supposed to play. It was nice because he’s been around the game quite a bit.

“Last year was tough because I know how much he wanted to out there and playing with us.”

This past summer has been productive for Phyfe. After a back-and-forth June, he improved through July workouts and excelled during UNI’s August trip to Italy. Basketball was the least of Jacobson’s concerns during his center’s recovery process.

“He’s a happy kid,” UNI’s coach said during the Missouri Valley Conference media day in St. Louis. “He’s always smiling, always has a bounce in his step, and that went away last year.”

Phyfe won’t be eased back into action.

UNI is entering year two of a new offense that has been a collaborative effort between assistant coach Erik Crawford and graduate assistant Seth Tuttle, the former Panther All-American who took key parts of the international game back to Cedar Falls after playing three seasons of professional basketball in Germany and Belgium.

The Panther coaching staff says this team has already added onto last year’s playbook. Players at all five positions are more comfortable with spacing and their role.

Phyfe will help stir the drink by facilitating ball movement.

“With the change we made to our offense that (center) position is the quarterback of what we’re doing once we get into the quarter court,” Jacobson said.

McDonnell (6-9, 212 pounds) thrived out of the high post as the team’s starting QB last season, leading the Panthers with 44 assists versus 25 turnovers in 18 league games. Justin Dahl, a 7-foot, 261-pound enforcer and shot-blocker, complemented McDonnell’s skill with a physical presence off the bench.

While McDonnell and Dahl are back for their senior seasons, Phyfe (6-9, 235) brings a combination of the two.

“Austin is the best physically of the three of them,” Jacobson said. “We feel like we’ve got, for different reasons, three guys that can hold down that position. … As I’ve thought about our teams, I don’t know that we’ve had three guys at a spot. And we do at the center position.”

Phyfe has quickly caught on to the new offense.

“Getting acclimated over the summer, I think his skill set fits perfectly because he can handle the ball on the perimeter,” Crawford said. “He’s a good passer as a five-man. He can post when he rolls to the rim.

“It’s a very important position. Luke did a phenomenal job last year of getting us through some times where our guards might have gotten stuck. Having the ability to read the defense and make the passes that are needed I think is important.”

While actions have been added to generate more 3-point looks and accentuate returning MVC Freshman of the Year point guard AJ Green’s talent, year two of UNI’s offense will see an increase in post touches.

The 2018-19 Panthers ranked second among the 10 MVC schools during league play in 3-point attempts and fourth in 3-point shooting percentage, but were eighth in 2-point percentage and ninth in free throws attempted.

“We didn’t take advantage of some of the opportunities defenses were giving us as far as getting into the paint and trying to score some easy twos,” Crawford said. “I think this year that’s the one area we’re going to focus on is being able to get to the free throw line more — being able to get it into the post some more, have a little bit more variety in the type of shots we’re getting so we’re not so reliant on jump shots.”

Phyfe is embracing the opportunity in front of him.

“There’s a lot of options for us five men and we kind of get to control everything, so it’s nice to switch roles with the point guard every once and a while,” Phyfe said.

Green, one of Phyfe’s former club youth basketball teammates, is eager for an extended reunion on the court.

“This preseason he’s looked great in practice,” Green said. “I feel like we’ve kind of both got a little connection out there together.”

With all he’s been through, UNI’s center is likely to receive a warm reception when he takes the opening tip inside the McLeod Center on Nov. 5 against Old Dominion. It’ll be a moment Phyfe won’t soon forget.

“I never got to play at home last year,” Phyfe said. “Being able to get back in front of the home fans, the home crowd, I’m super excited.”

Top-ranked Cedar Falls put together a dominating performance on the way to the Mississippi Valley Conference Supermeet volleyball title Saturday.

Mahomes expected to miss a month

Matt Moore spent his spring as a scouting assistant with the Miami Dolphins, and he spent most of the summer gearing up for a season as an assistant high school football coach.

It took seven games before a United States Hockey League opponent figured out a way to defeat the Waterloo Black Hawks.

UNI center Austin Phyfe is driven to make the most of every minute in his return to action this season.

North Carolina's Sterling Manley (21) and Northern Iowa's Austin Phyfe (50) struggle for a rebound during a 2017 game in Chapel Hill, N.C.