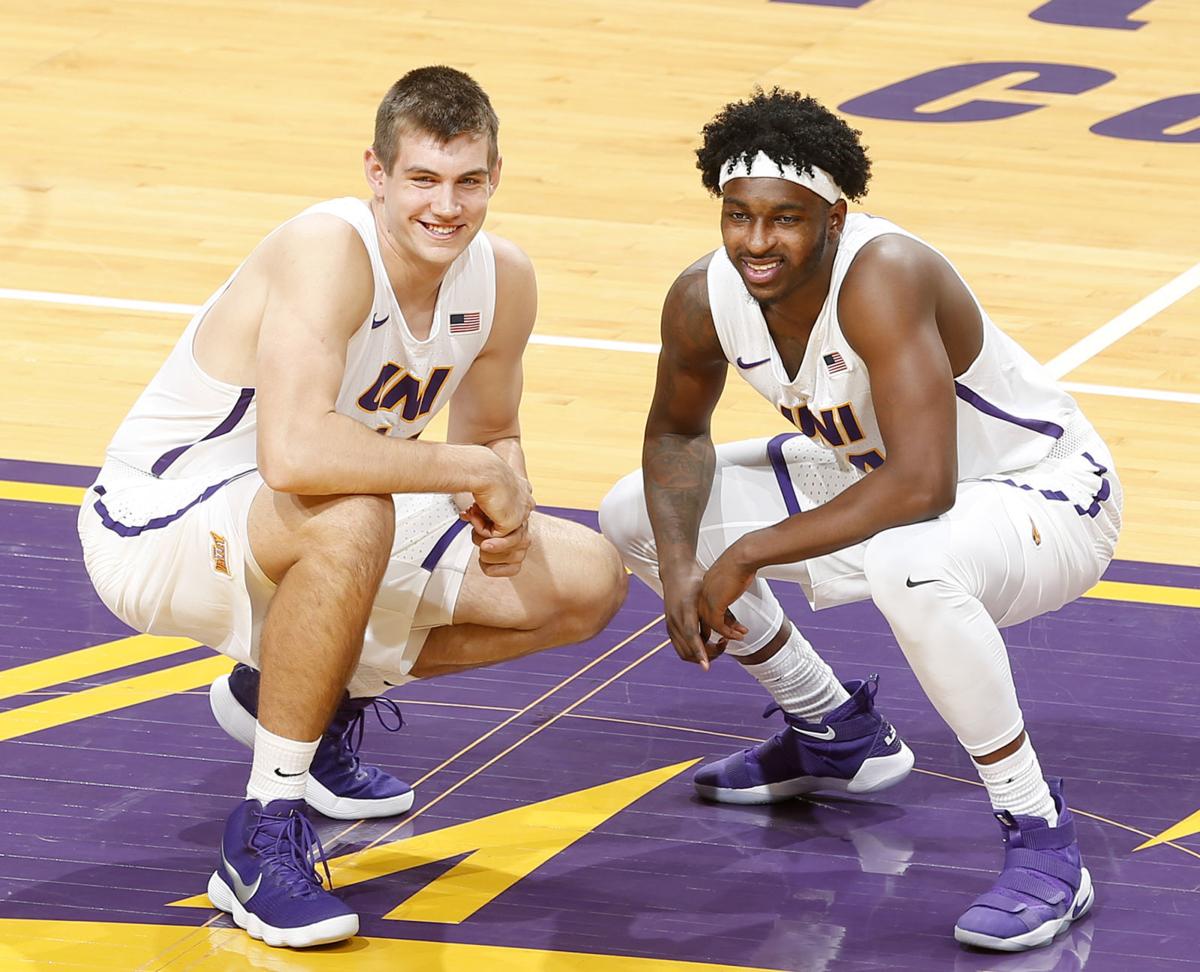 Austin Phyfe, left, and Tywhon Pickford, pictured during UNI's 2017 media day, have become best friends since arriving on campus three years ago. They enter their fourth season in the program as key leaders. 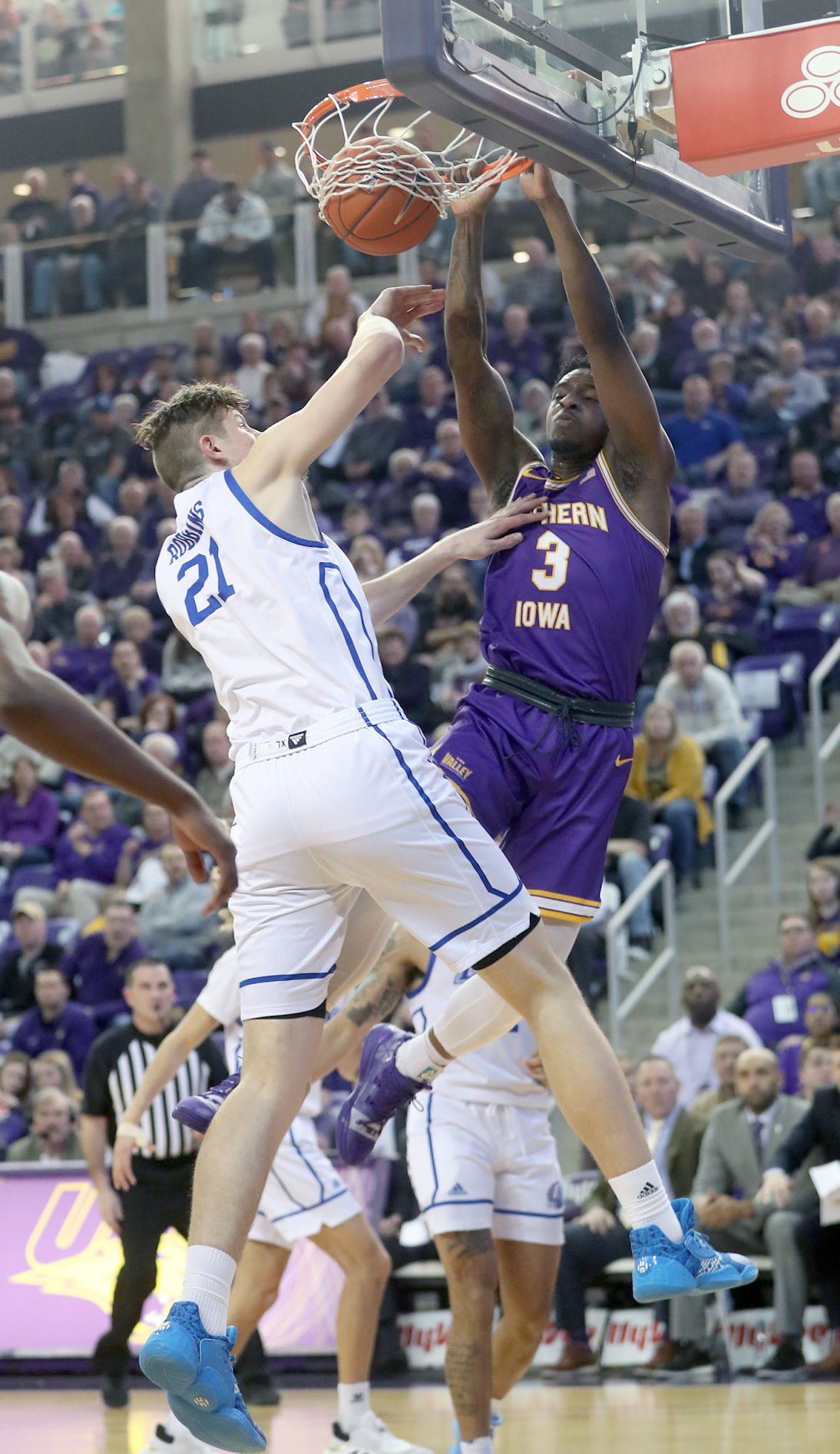 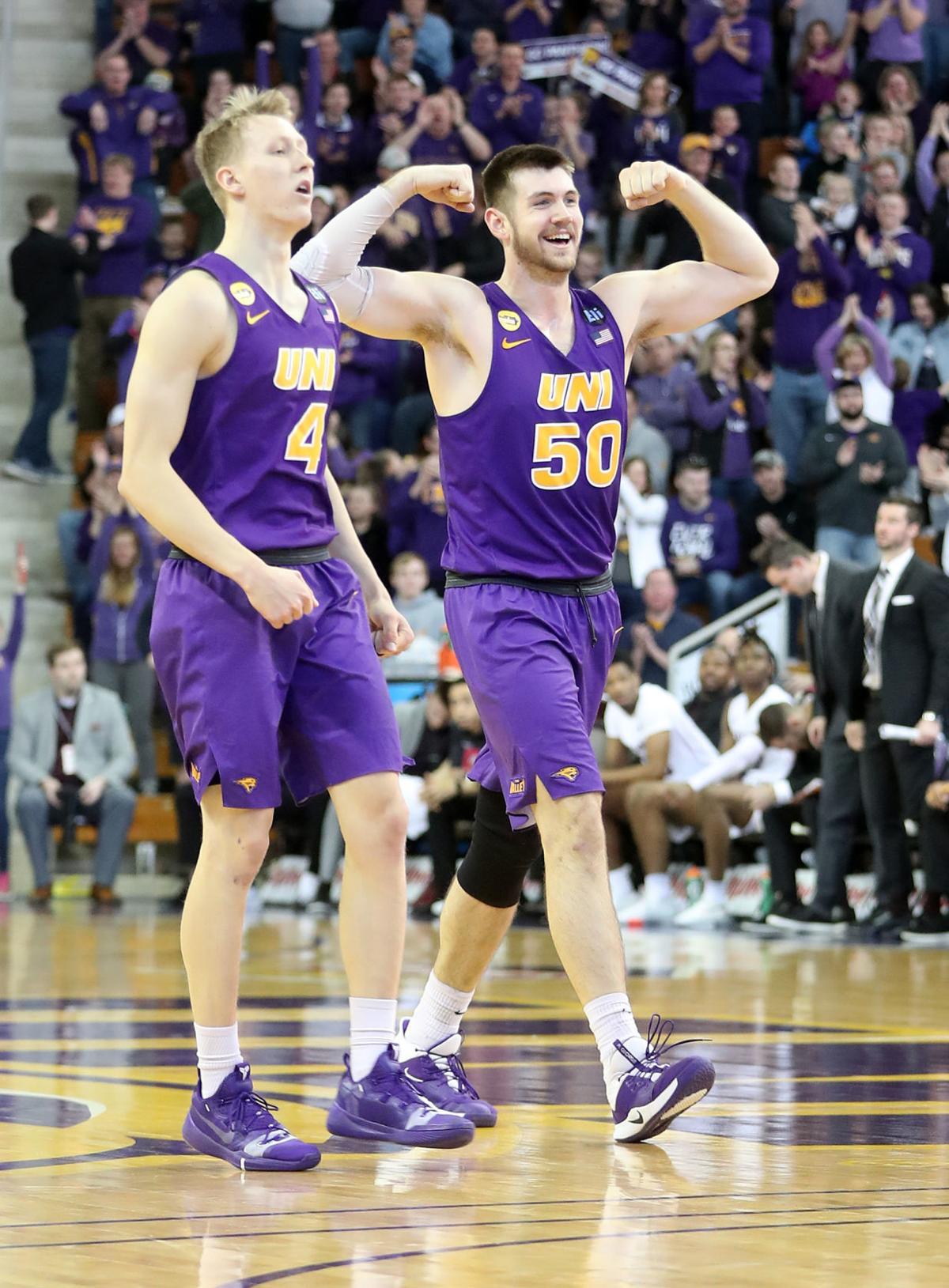 Northern Iowa's Austin Phyfe celebrates a score by Tywhon Pickford against Southern Illinois during 2020 action at the McLeod Center in Cedar Falls.

CEDAR FALLS — Freshman year in college dormitories can become an interesting social experiment. Some roommate pairings initially click before conflict arises, while others start off on the wrong foot and end up in a countdown until the end of the final semester.

Then there are students from different backgrounds who become a perfect match. Such was case with the only two freshmen in the University of Northern Iowa’s 2017 basketball recruiting class — Tywhon Pickford and Austin Phyfe.

Pickford grew up in Minneapolis and made a name for himself at Maple Grove High School before attending college in Cedar Falls. Phyfe — the son of former UNI center Steve Phyfe — already felt at home as he made a short trip down the road from Waverly.

It didn’t take these freshmen roommates long to experience a, “Did we just become best friends?” moment. They both hate being cooped up indoors. They’ll often grill out and take part in activities from miniature golf to organizing a weekly bowling night.

“When I first met him it was just like I’ve known this guy for my whole life,” Pickford recalls. “We clicked right away and we’ve been best friends ever since.”

Pickford and Phyfe moved back to Cedar Falls earlier this month when their off-campus housing lease picked up on June 1. They’re beginning their fourth year living under the same roof. While other members of the basketball team have joined them, these two classmates have become like brothers throughout their college years.

“We’ve been living together since freshman year and I didn’t want to roommate with anyone else if he wasn’t a part of that,” Pickford said. “He’s one of the few people I talk to and am with every day.”

The two longest-tenured players on UNI’s roster quickly work through differences and say they have yet to get annoyed or bored by each other.

“He turned out to be one of the best friends I’ll have for the rest of my life,” Phyfe said. “Knowing we both come from different backgrounds, we have so many similarities, as well.

“From the moment right when I met him, I could tell he was a good dude.”

Pickford and Phyfe join third-year Panthers AJ Green and Trae Berhow as the only returning upperclassmen within UNI’s roster. Since voluntary team workouts began on Monday, what this leadership group has lacked in numbers, they’ve more than made up for in quality.

Green, Berhow and Phyfe are returning starters from a 2019-20 Missouri Valley Conference regular season championship run. Pickford played major minutes in a sixth-man role and picked up a handful of starts when Spencer Haldeman went down with a brief injury.

Restrictions due to the coronavirus that brought last season to a untimely end have prevented more than 10 members of the team from working out together at the same time. FIT COURTS in Cedar Falls has served as a popular training gym with the upperclassmen leading the first and second year players in their position groups.

“There’s no coaches there to lead workouts so I think this opportunity will help with my leadership,” said Phyfe, a returning first team all-MVC selection. “I know I had a bigger role playing last year and I know I have to build off that. One of those things is going to be being a leader. I’m just taking this as a good lesson for what’s going to come during the year.”

Pickford says following a stretch of completing workouts around the house in their hometowns, everyone has been eager to get back together in the gym. The incoming senior is ready to take on responsibility holding teammates accountable outside of practice to get in extra work.

As for on the floor, “Making sure we’re competing and getting better and working hard every day is what my leadership will look like this year,” Pickford said.

The NCAA recently approved a summer access plan allowing basketball coaches to begin working with teams on July 20. Jacobson anticipates he and his staff will run workouts for two to three weeks from that date.

Until then, growth will be player led. UNI’s coach is a firm believer that it takes veteran leadership for teams to reach their potential. When the most experienced players genuinely like being around each other and know how to work together, that can elevate the group to another level.

“The piece that can really put it over the top is the friendships, the camaraderie, the chemistry amongst that group of your upperclassmen,” Jacobson said. “Ty and Phyfe have been close friends since the first day they got together here on campus and it’s remained that way. Their friendship has continued to get stronger.”

Pickford and Phyfe’s trajectory certainly is trending upward after experiencing highs and lows together throughout their careers. Pickford suffered a foot fracture prior to his sophomore year, while Phyfe was forced to take a medical redshirt that season after battling through fainting spells.

“We were able to help each other out and get each other through stuff when we needed,” Pickford said. “If I was on crutches and I couldn’t do anything, he would go to the store for me. That just means a lot. … He was there for me and willing to do whatever to help me get back and feel like I’m not in this alone.

“The guys can look to us and see the type of relationship we have and how we bond together and it will bring the whole team together. We can move on the same page.”

Phyfe says the work Pickford has put in to regain the form demonstrated during a breakthrough freshman season in which he set UNI’s rookie rebounding record speaks volumes. The incoming senior’s voice is becoming more consistent as a new season begins.

“I noticed over the year he’s gotten a lot more vocal and I think that will continue as he is a senior on this team,” Phyfe said. “He’s a guy people know has worked, been successful. He’s someone that you listen to when he talks because you know that he’s been there and done these things.”

Grants will be made each year from the memorial fund to support charitable causes.

Austin Phyfe, left, and Tywhon Pickford, pictured during UNI's 2017 media day, have become best friends since arriving on campus three years ago. They enter their fourth season in the program as key leaders.

Northern Iowa's Austin Phyfe celebrates a score by Tywhon Pickford against Southern Illinois during 2020 action at the McLeod Center in Cedar Falls.