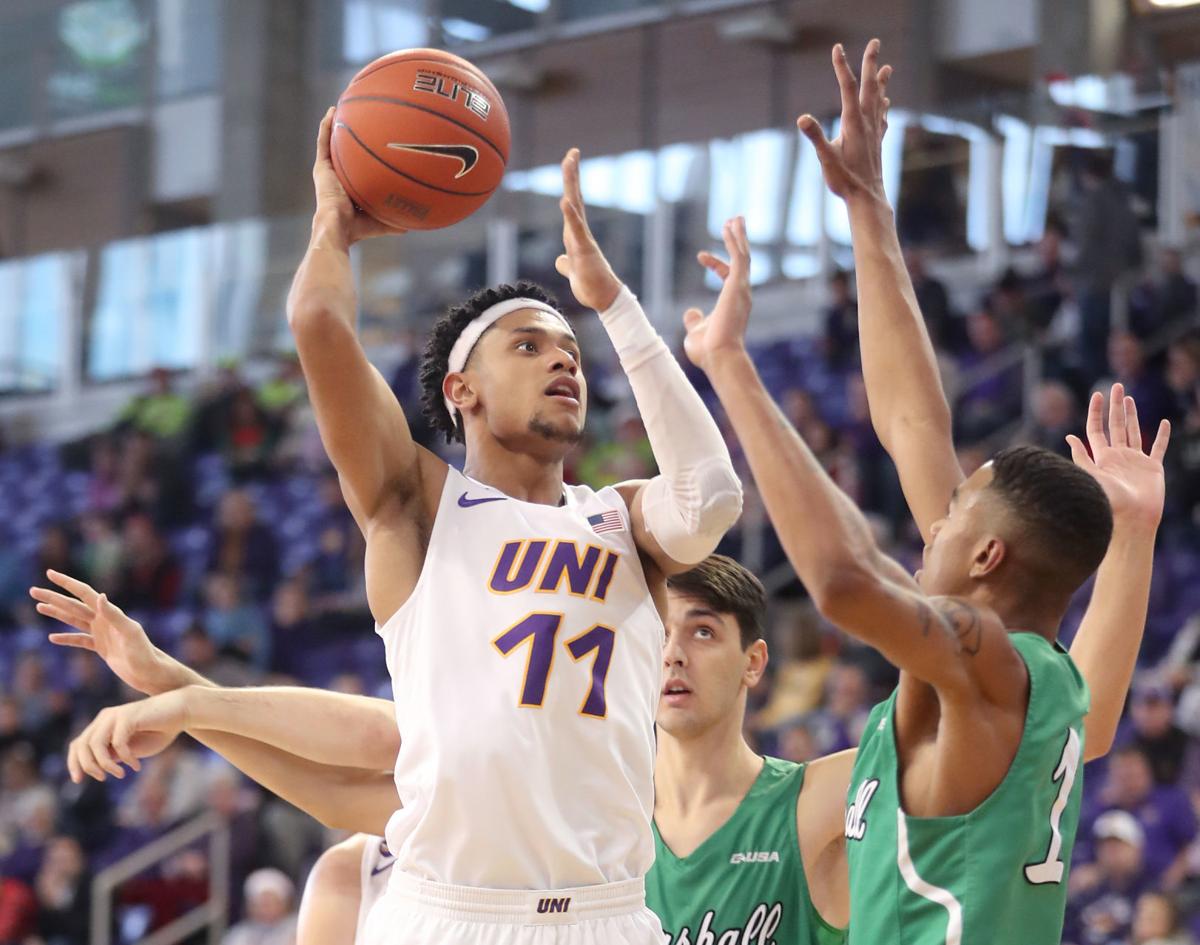 Northern Iowa's Trae Berhow puts up a shot over Marshall defenders during a Dec. 22 game in Cedar Falls. 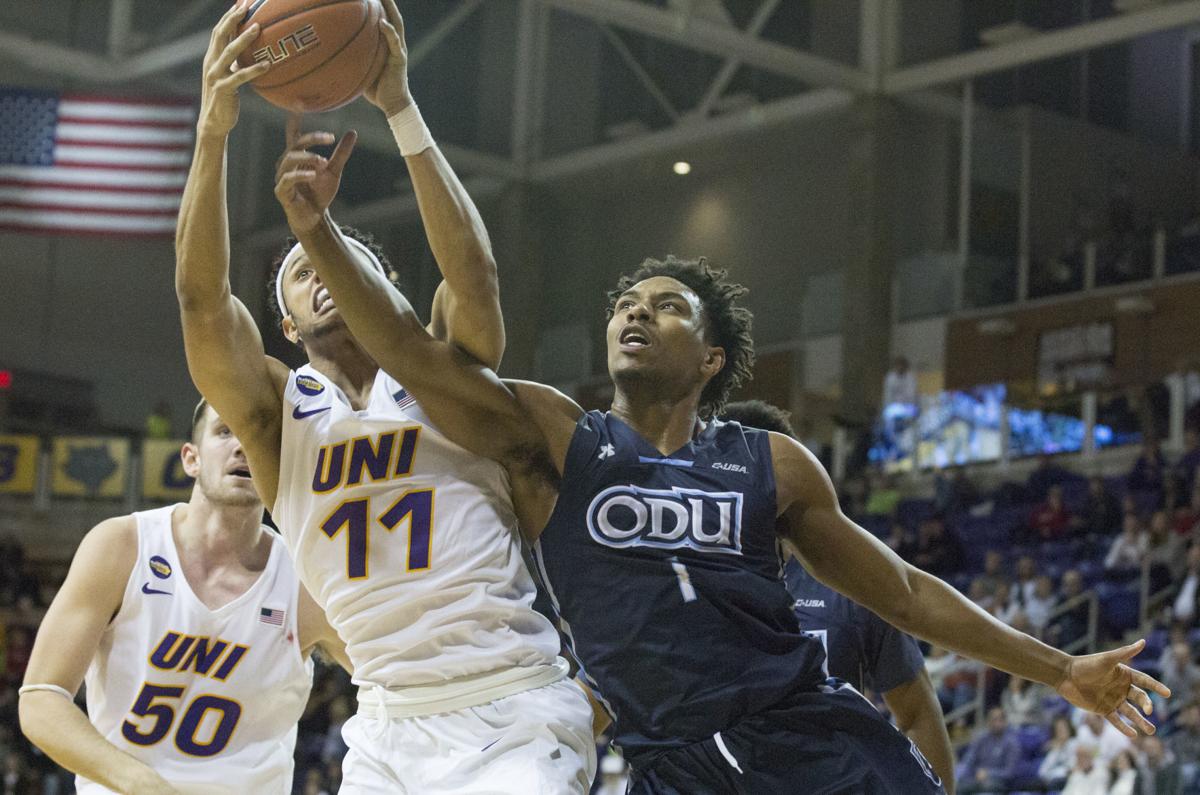 UNI's Trae Berhow grabs a rebound from Old Dominion's Jason Wade during a Nov. 5 game at the McLeod Center.

CEDAR FALLS – Trae Berhow can glance into the McLeod Center crowd during a weekend afternoon game and spot his grandparents, mom, girlfriend, cousins, uncles and aunts. He has a handful of younger cousins who bring along miniature basketballs and enjoy participating in the Panther Pals program.

That support means plenty to the Northern Iowa junior, who also feels like he has a family working with him on the court during his second season in Cedar Falls after transferring from Pepperdine University in Malibu, California.

A self-described country boy from Mayer, a town of 1,749 located 37 miles west of Minneapolis, Berhow grew up four-wheeling, hunting and fishing. He was a four-sport high school athlete who competed alongside some of his closest friends.

On basketball game nights, Berhow was often one of the last to arrive when his grandparents, Mary and Randy, routinely hosted the team for wild rice soup, homemade bread and cards 12 minutes up the road in Watertown where their school was located.

“Everyone would come together and it helped us during the course of the season. We trusted each other.”

Northern Iowa began recruiting Berhow as a high school sophomore. Head coach Ben Jacobson saw an accurate shooter with a lively bounce in his step. Berhow’s athleticism shined during a play that his AAU team frequently ran in which he’d get a back screen and finish off a lob at the rim.

“It wasn’t just catch and shooting 3s,” Jacobson recalled. “He had a smile on his face and some personality to what he was doing.”

UNI associate head coach Kyle Green served as the school’s main recruiter and developed a strong relationship with Berhow and his family. While Pepperdine was his first choice, Berhow wasn’t too keen on staying after coach Marty Wilson was dismissed following a 6-26 season.

On top of the losses, his West Coast games often started at 9 p.m. Central time, making it difficult for family back home to watch him play. Berhow’s grandfather, Randy, never missed a game through high school, but had a heart condition that allowed him to only take one flight a year.

Trae’s mom, Nicole, had only missed one of his high school games and moved out to California with her son. But she was missing her home, too.

“The biggest thing I was looking for was a coaching staff that I felt most comfortable with,” Berhow said. “Leaving Pepperdine, the head coach coming in wasn’t the one I came to play for.”

Once Berhow decided to transfer, UNI was able to pick up from where it left off in the recruiting process. Berhow’s visit to Cedar Falls sealed the deal.

Former Panthers Jeremy Morgan and Klint Carlson had returned from playing professional basketball in Europe and joined the team for a pick-up game.

“I took that as a huge thing. (Jacobson) is caring for these people past graduation. When they graduate, he’s not done with them. He’s not in it just for his job to get paid, he’s in it for us to be successful. That was one of the biggest things that sold me.”

Not only was UNI a good fit for Berhow, the sharp-shooting country boy was also a good fit for UNI. Berhow received a waiver from the NCAA to become immediately eligible and matched his Pepperdine numbers by making 40 percent of his 3-point shots with six rebounds per game during his first season with the Panthers.

“We needed his scoring and he brought that to us last year,” Jacobson said. “On the offensive end, he’s a perfect fit to catch and shoot, straight-line drive it to get to the rim a little. He’s got a lot of confidence in his ability to make shots and that fits how we want to play. That part is right up his alley.”

Berhow has elevated his game to new heights this season. It started against UT-Martin when he tied the school record by making 8 of 11 3-point attempts, and he’s yet to cool down. After hitting all four of his 3-pointers against Marshall in Sunday’s non-conference finale, Berhow has connected on 34 of his last 50 perimeter shots.

With one-third of the season complete, Berhow’s 38 3-pointers are on pace to surpass the single-season school record of 96 set by Marc Sonnen during the Panthers’ 2012-13 campaign. Berhow’s 55.9 percent success rate from distance currently ranks second nationally among NCAA Division I shooters.

“I’m a big person on you can always do better,” said Berhow, who builds relationships with people who challenge him to achieve more. “I scored 36 points and my girlfriend said, ‘I searched on the internet and saw somebody scored 101.’ There’s always room for improvement so there’s no congratulations. Always you can do better. That’s a good thing.”

Jacobson has no hesitation placing Berhow alongside former Panthers Sonnen, Matt Bohannon, Paul Jesperson and Ali Farokhmanesh as one of the best catch-and-shoot players he’s coached.

“It hasn’t been just one game, it’s been a good stretch,” Jacobson added. “He can keep it going. I don’t have any doubts about that. Because he’s a good enough shooter and he’s a confident kid, and he loves being out there on game night, he’s the kind of guy that can keep this going.”

Berhow sat extended stretches last season when Jacobson didn’t feel like he was focused enough, and at times his attention to detail was lacking. That’s changed this season.

“His practice habits have allowed him to improve tremendously in key areas that not only make him a better player, but allow us as a team to get better every day,” Jacobson said. “He’s one of our best players.

“Everybody has to show up to practice and work hard. But when you’re one of the best players, you have more responsibility for showing up every day and paying attention to detail, working hard and challenging your teammates competitively. That was not a strength of his last year, and he is doing it every day now.”

The only extended stretch Berhow has sat this season came during the final 12 minutes of the first half after he picked up a technical foul for taunting Colorado’s bench. UNI’s assistant coaches convinced Jacobson to allow him to play in the second half, and Berhow tallied 17 points over the final 20 minutes of a 79-76 signature victory.

“We haven’t even sat down and talked about it since it happened because we don’t need to. He knows exactly where I stand on this one. ‘Let’s go man. Play with more passion, play with more enthusiasm, more competitiveness — absolutely.’ But we also are who we are as a program and we’re going to be respectful. We’re going to direct it to our teammates and to our fans and get everybody involved.”

It may have taken an extra year, but Berhow has found what so many aspiring athletes covet – a perfect fit. While he fits like a glove into a revamped offense, with an ability to also defend the 4 and rebound that allows UNI to play smaller, Jacobson also points out Berhow’s infectious personality is a match.

“It means everything,” Berhow said. “Coming out of high school as a senior this is what you look for, a fit that makes you feel like you’re wanted here and you’re comfortable. You can be yourself. The hardest thing is to try and find a college where you can be yourself, and that’s what I found.”

PRINT ONLY Nick Petaros' stories of 2019

Covering athletics over the past decade, I continue to be impressed by the bonds formed within teammates and families through competition.

Members of the national champion CF Ambush esports team credit their teamwork for their success.

Northern Iowa has been extremely efficient while opening the season 11-1. The Panthers will enter MVC play as the league favorite.

Iowa’s top-ranked wrestling team crowned five champions and ran away with the team title at the Midlands Championships Monday.

Former NBA commissioner David Stern died Wednesday afternoon, the league announced. He was 77 and had been in serious condition following surgery for a brain hemorrhage on Dec. 12.

Waterloo put three goals on the scoreboard in the final period to slip past Dubuque 3-2 Friday night in USHL action.

JA to host Taste of Achievement

Participants can enjoy food and beverages paired together by industry experts.

Northern Iowa's Trae Berhow puts up a shot over Marshall defenders during a Dec. 22 game in Cedar Falls.

UNI's Trae Berhow grabs a rebound from Old Dominion's Jason Wade during a Nov. 5 game at the McLeod Center.