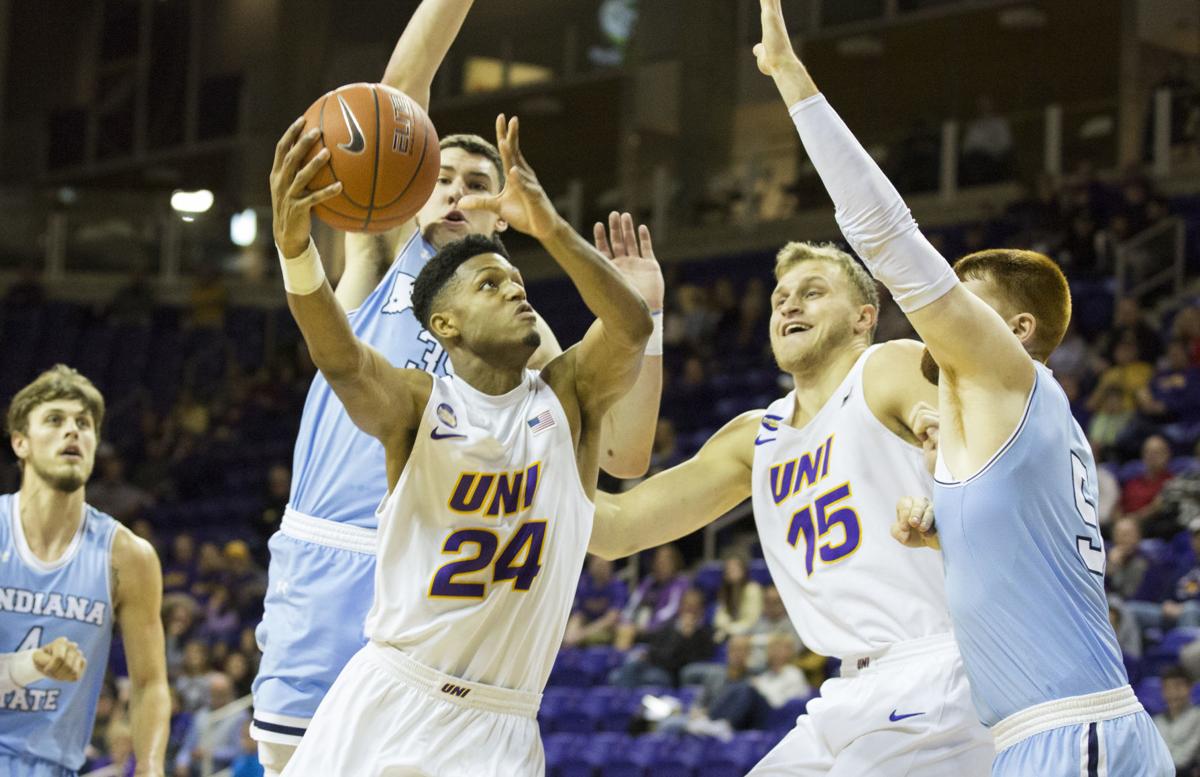 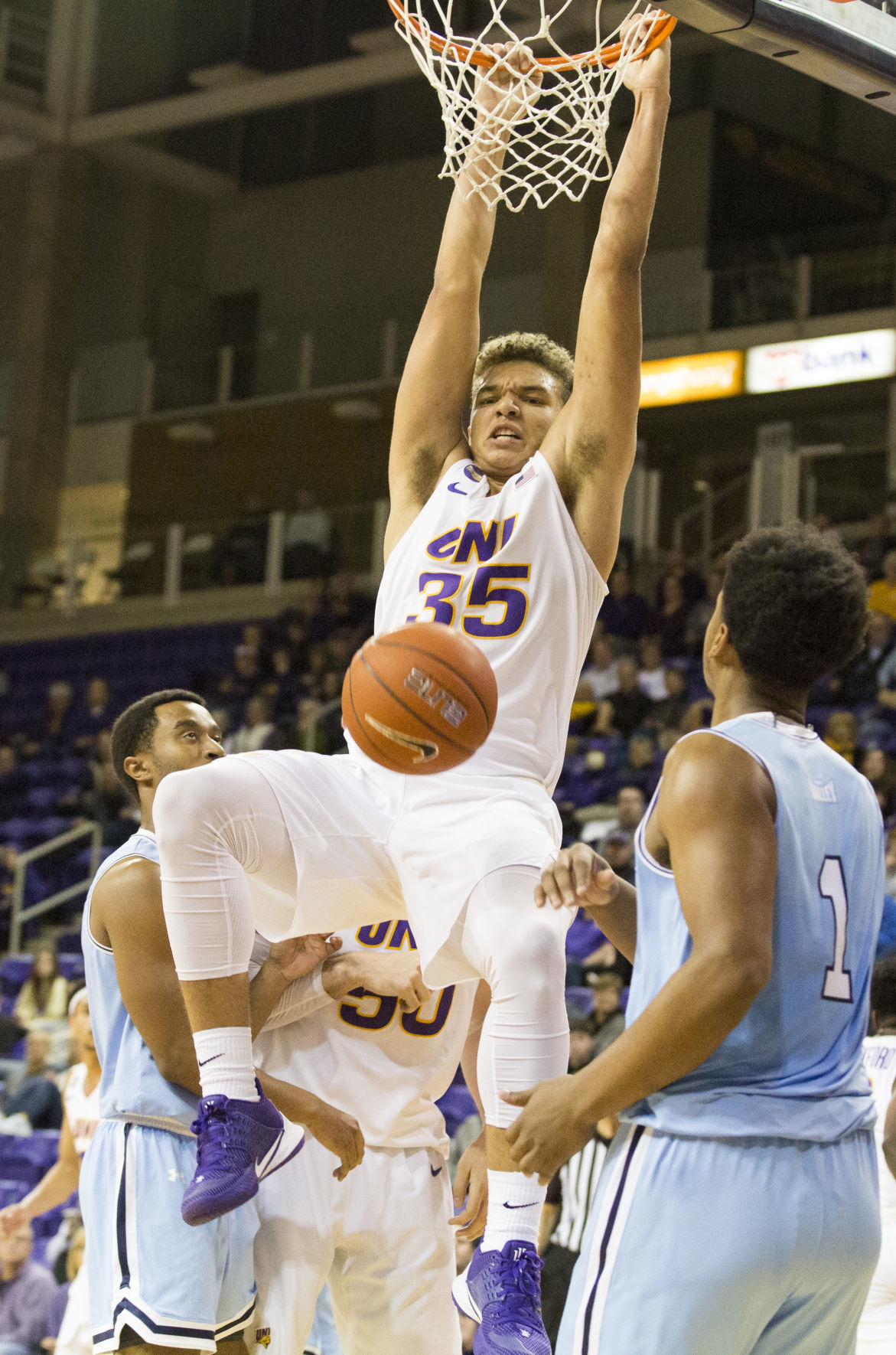 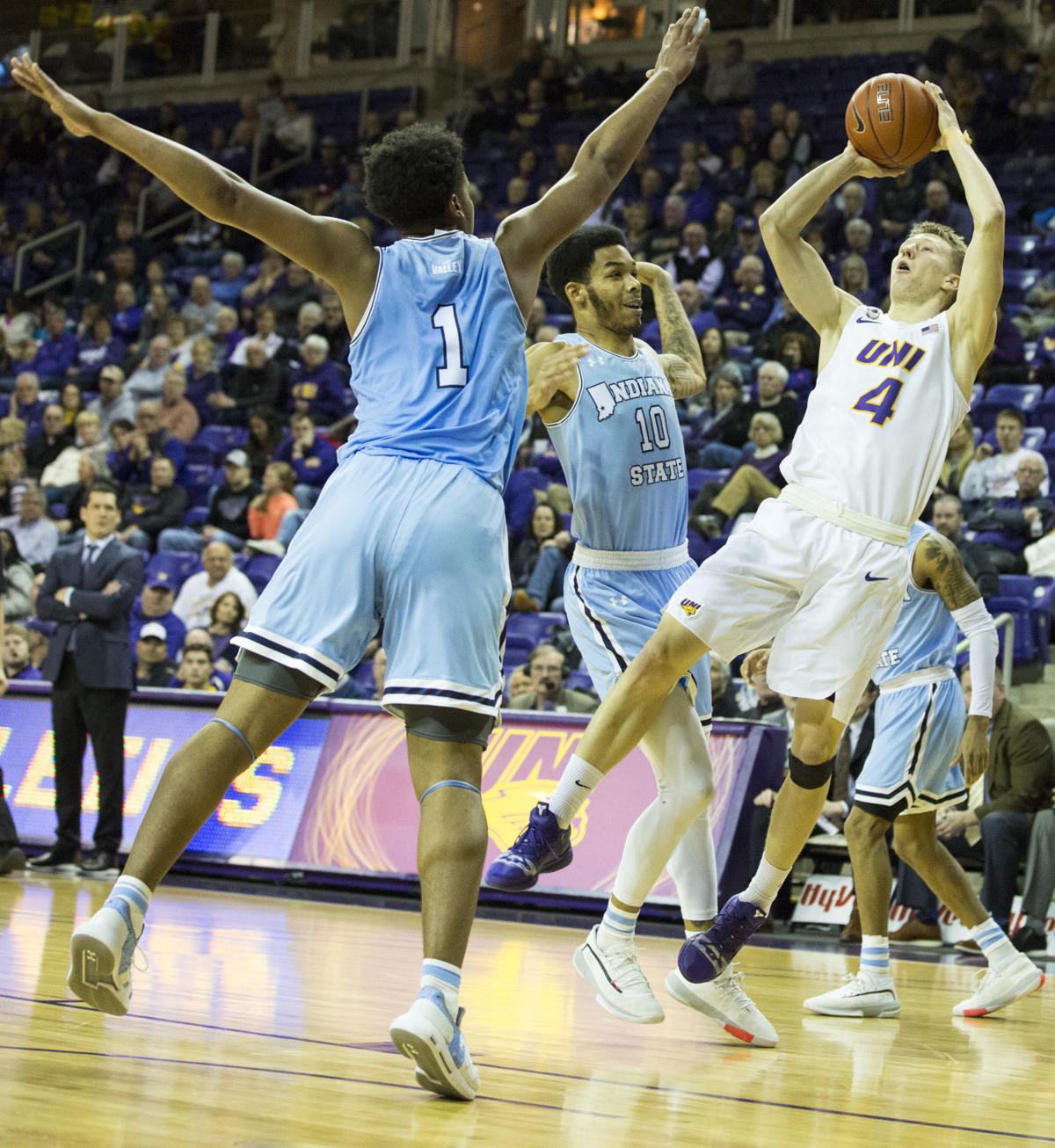 UNI's AJ Green gets fouled as he takes a shot Tuesday. 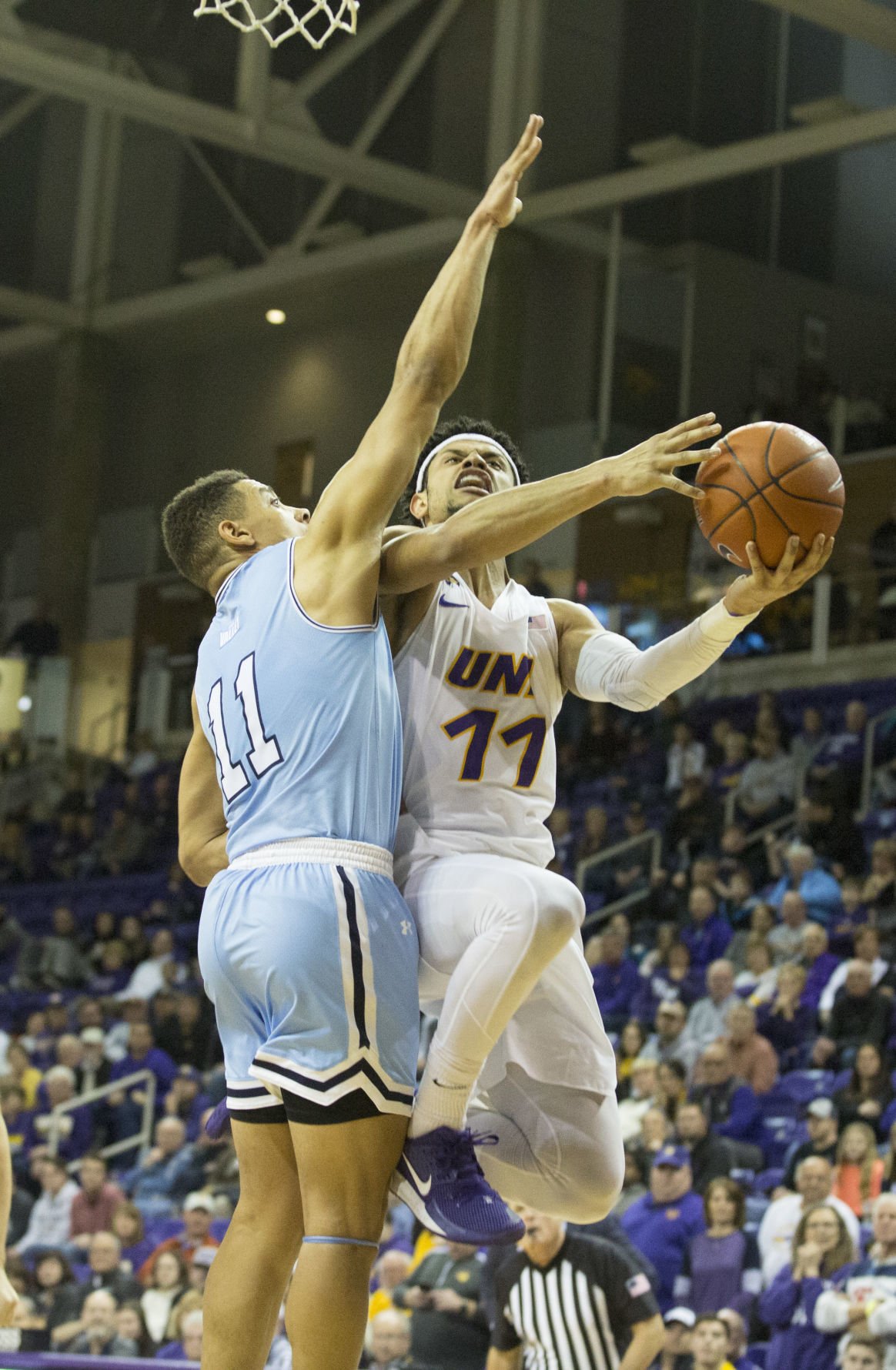 The Panthers' coach pointed out that Indiana State made 7 of 16 3-point attempts, while his UNI team that had been averaging 9.6 3-pointers per game converted just 3 of 15 looks from distance in front of a McLeod Center crowd of 3,697.

“We weren’t behind tonight and we only made three 3s,” Jacobson said. “I feel like this team has the ability to do that. … We can do it with some defense and rebounding.”

Center Austin Phyfe led a strong interior presence for UNI (13-2, 2-1 Missouri Valley Conference) with 13 points and 12 rebounds. Trae Berhow, one of the nation’s most efficient 3-point shooters, ripped and drove his way to a game-high 16 points that included a pair of dunks. AJ Green added 15 points, including a difficult traditional three-point play off a mid-range jumper through contact late in the second half.

Beyond finding different ways to score on offense, Jacobson was satisfied with the gains his team made with its on-ball defense since Saturday's game against Bradley. The Panthers often contested shots without fouling and were rarely beat off the dribble while securing multiple shot clock violations.

Berhow led UNI’s ability to limit the Sycamores to one shot with seven defensive rebounds and Phyfe finished with seven offensive boards as the Panthers held a 33-20 advantage on the glass. Phyfe’s final offensive rebound was kicked out to Berhow, who made a pair of free throws to make it a six-point game with 27 seconds remaining.

“It breaks your back,” Indiana State coach Greg Lansing said, addressing UNI’s offensive rebounds following lengthy half-court possessions. “You fight like crazy for 25 seconds and then they throw it up there and Phyfe gets his body down in there and goes and gets it. He’s tough, he’s long, he’s relentless and he doesn’t give in.”

Rebounding has been a source of pride for UNI this season. The Panthers entered Tuesday's game outrebounding opponents by an average of seven.

“It was one of those games where the ball was kind of going my way,” Phyfe said. “We want to outrebound every team that we play. Shooting more threes is going to lead to longer rebounds, so having the opportunity to get those second-chance buckets is going to be big for us.”

UNI’s lone deficit came after Barnes hit a 3-pointer to give Indiana State a 14-13 lead 11 minutes into the game. Green instantly answered with a 3-pointer, and the Panthers managed to hold off the Sycamores’ second-half runs.

In particular, Jacobson turned to his freshman trio of Antwan Kimmons, Noah Carter and James Betz after a media timeout with UNI clinging to a 35-34 lead and 14:26 remaining.

Kimmons scored off a Betz steal and assist, before adding another determined drive for a layup. Betz then finished a lob from Green to complete a 6-0 run that provided separation.

“That may have been the game right there,” Jacobson said. “We were stuck a little bit.

“They were more physical in the second half and they extended their pressure. At that point it’s basically a tie game. Antwan’s speed really helped us. Noah’s ability to score the ball is important, and then James got behind them and got that lob.”

Veterans Brown, Phyfe and Tywhon Pickford were subbed back in after a five-minute rest with fresh legs to finish the game. Phyfe scored off an offensive rebound with 2:58 remaining after Indiana State cut its deficit to one. Green came up with a loose ball steal when ISU had a chance to tie or take the lead, and Berhow drew a goaltending call off a drive that pushed it to a two-possession contest, 62-58, with 1:21 to play.

Photos from the game

UNI coach Ben Jacobson has challenged his team to play harder on defense.

A.J. Green rose to the occasion Saturday to help UNI slip past Bradley in a Missouri Valley Conference basketball thriller.

UNI falls at No. 20 Missouri State

Missouri State's 20th-ranked women's basketball team was too much for Northern Iowa Sunday.

UNI offense among the nation's most efficient

UNI's AJ Green gets fouled as he takes a shot Tuesday.