Northern Iowa's Trae Berhow celebrates during the second half of an NCAA college basketball game against Drake in the quarterfinal round of the Missouri Valley Conference men's tournament Friday in St. Louis.

University of Northern Iowa guard AJ Green, center, drives to the basket in the second half during the quarterfinal round game of the Missouri Valley Conference men's basketball tournament Friday in St. Louis. 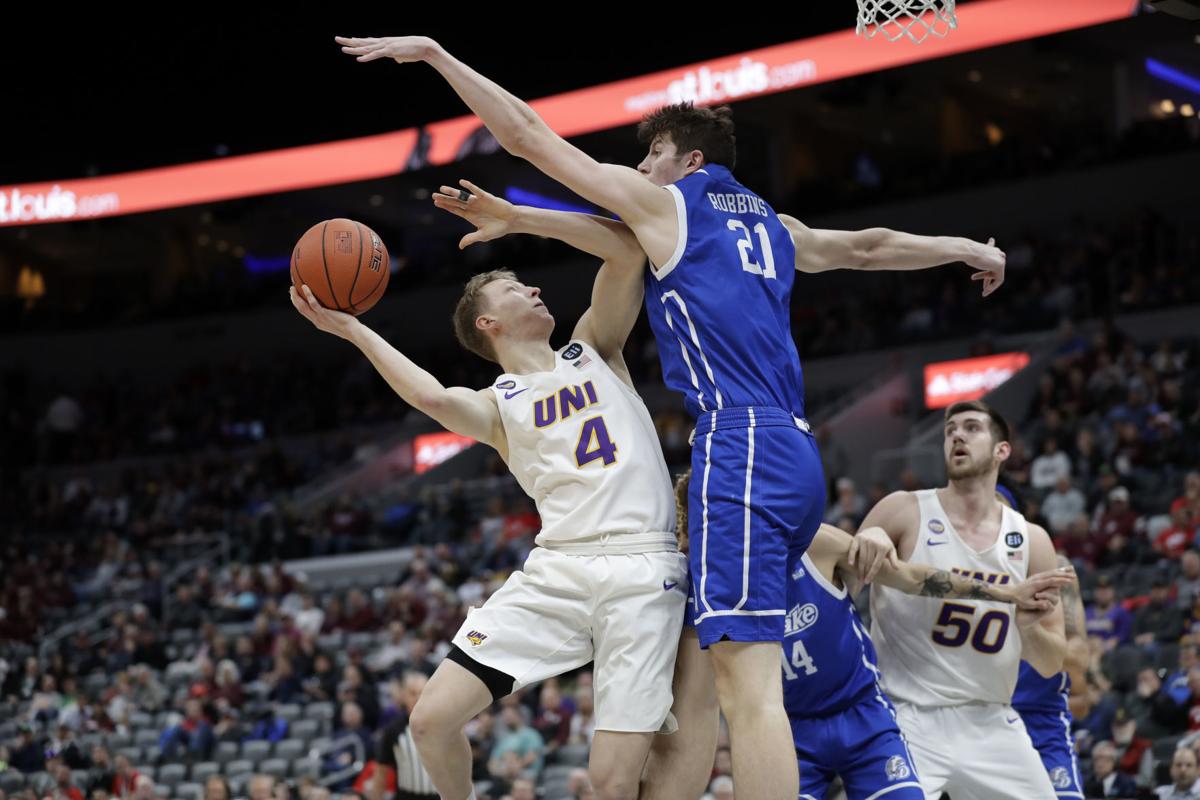 “This obviously doesn’t help,” Jacobson said after UNI’s stunning 77-56 defeat to No. 8 seed Drake in the quarterfinal round of the Missouri Valley Conference tournament. “But it doesn’t change what happened over the course of four months, and that’s where I feel great about what we’ve done.”

UNI’s resume when the NCAA tournament selection committee meets next weekend will include a signature true road win at a Colorado team ranked among the top 25 in the NET (NCAA Evaluation Tool). If the committee looks into UNI’s three point neutral site loss against 19th ranked West Virginia, it’ll discover that the Panthers were in the lead throughout the majority of that game.

UNI moved from 36 to 47 in the NET rankings following Friday’s setback with a 4-3 record against teams in the top two quadrants and an 8-4 mark in true road games. The Panthers’ road win over Valparaiso earlier this season could become a quad two victory if the Crusaders move up from 139 into the top 135.

The Panthers went undefeated on their home court, but there weren’t any teams in the first two quadrants lining up to make a trip to Cedar Falls. UNI’s two home games against NCAA Division III opponents aren’t evaluated, meaning the Panthers have a 23-6 record in the eyes of the selection committee.

“We haven’t been behind very much, very often this year,” Jacobson said. “Each time we have, we fought back and got it to a one-possession game.”

That happened again on Friday. UNI cut a 17-point deficit in the first half down to 10 by halftime and two early in the second half. Drake then managed to pull away during the Panthers’ longest scoring drought of the season that stood near 10-minutes.

“We did some things that are out of whack in this game,” UNI senior Isaiah Brown said. “But we’ll watch film from this because we also have more basketball to play.”

Fifth-year senior Spencer Haldeman was a member of UNI’s most recent NCAA tournament team in 2016 during his redshirt year. He sees some similarities between this year’s Panthers and the group that reached the second round of the NCAA tournament on Paul Jesperson’s buzzer-beater.

“The way we compete is similar to how we were freshman year,” Haldeman said. “I think our (2020 NCAA) resume is good. We’ve played a lot of good teams tough. We’ve beat a lot of good teams, but that’s out of our control now. We’ll just have to wait and see.”

National bracket experts have UNI sitting on the bubble. ESPN’s Joe Lunardi projected the Panthers as the final NCAA at-large qualifier on Friday before moving them back to his next four out column on Saturday. CBS Sports analyst Jerry Palm responded “not good” when someone on Twitter asked him how he was feeling about UNI’s at-large chances.

The MVC’s most recent at-large qualifier was Wichita State in 2016. The Shockers were selected to play in a First Four game at Dayton following a semifinal MVC tournament loss to UNI that season.

Mid-major Belmont was the surprise at-large team included in the 2019 NCAA field with a NET ranking of 46 that stood in the ballpark of UNI’s current 47.

“Between now and next Sunday there’s a lot of teams that are playing, a lot of conference tournaments that are going,” Jacobson said. “The team sheets that look like ours, the ones that they’ll be comparing, there’s a lot that’s going to happen with those.”

In his opening statement after Drake’s upset win, Bulldogs head coach Darian DeVries made sure to let everyone know where he stood on the topic.

“First off, I’d like to congratulate Northern Iowa on a tremendous year,” DeVries said. “They’re certainly an NCAA tournament team and deserve to be in the tournament.”

If UNI doesn’t receive an NCAA bid, the Panthers have already secured an automatic ticket into the NIT as the MVC regular season champion.

“I personally think we should make the (NCAA) tournament,” Brown said. “But whether we make the NCAA tournament or the NIT, I think whichever tournament we play in, we’re going to make a run in it.”

Now, all the Panthers can do is practice and wait.

“It’s going to be a little tough,” Haldeman said, addressing wait until Selection Sunday. “We’re ready for anything. We still get to play. The season is not over, but we would have liked a little different outcome in the (MVC) tournament.”

Drake became the first 8-seed to win a quarterfinal game against the MVC Tournament's top seed.

UNI sophomore AJ Green has been named the 2020 Missouri Valley Conference Player of the Year.

Northern Iowa's Trae Berhow celebrates during the second half of an NCAA college basketball game against Drake in the quarterfinal round of the Missouri Valley Conference men's tournament Friday in St. Louis.

University of Northern Iowa guard AJ Green, center, drives to the basket in the second half during the quarterfinal round game of the Missouri Valley Conference men's basketball tournament Friday in St. Louis.