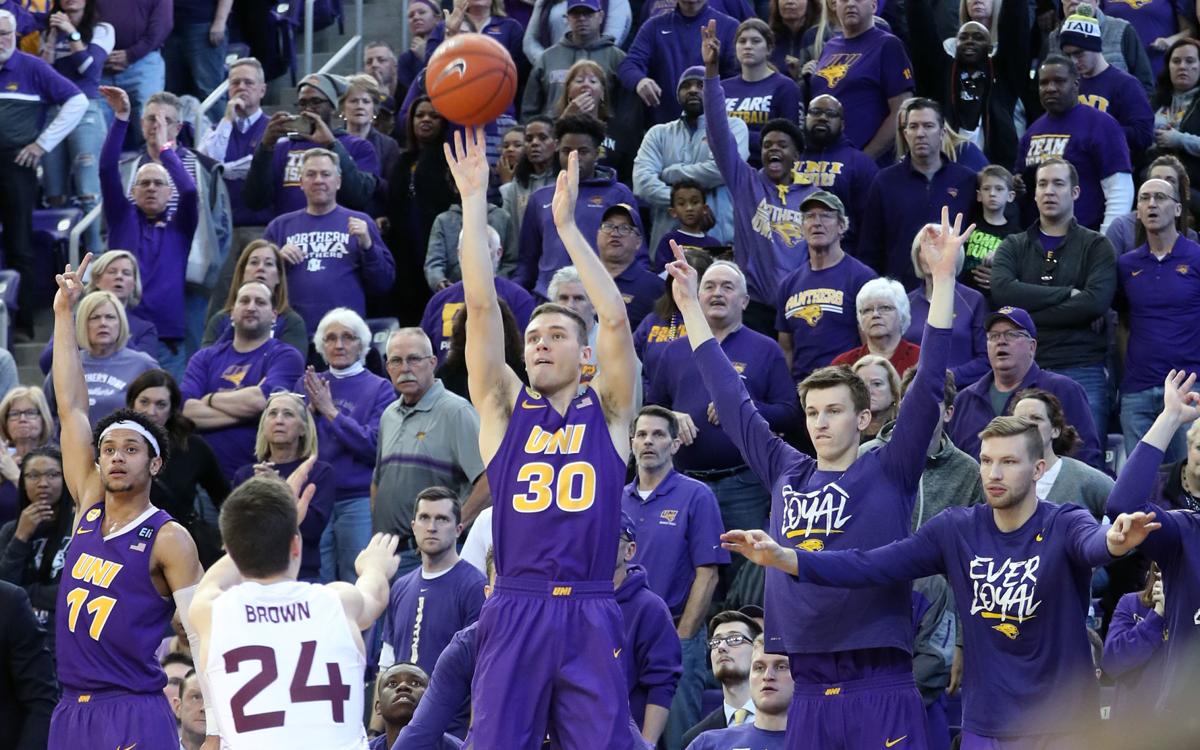 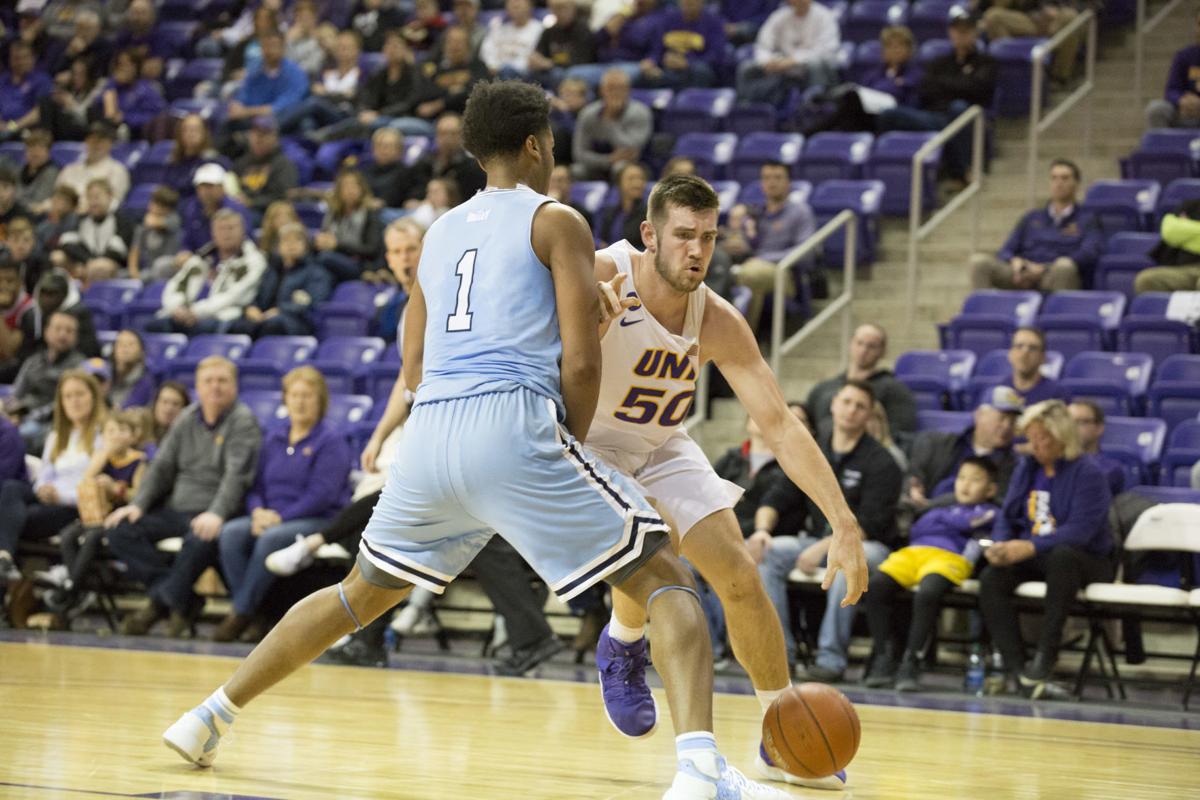 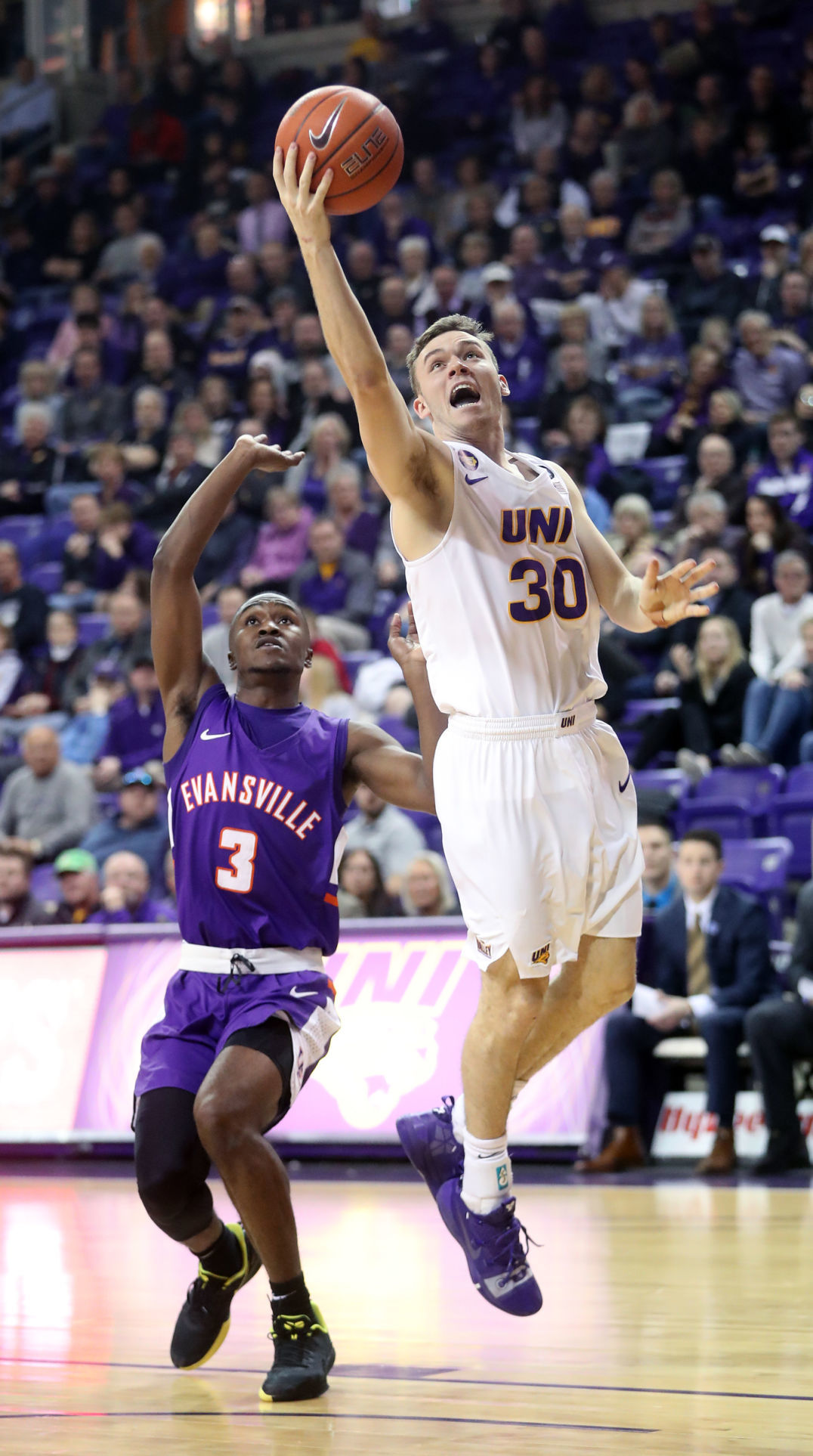 Northern Iowa's Spencer Haldeman finds a clear lane to the basket against Evansville during action at the McLeod Center.

CEDAR FALLS — Flow is a fitting name for a newly-installed basketball offense that has flourished in year two at the University of Northern Iowa.

Four different Panthers have scored at least nine points within each of the past three victories, culminating in UNI (25-5, 14-4) securing its first Missouri Valley Conference regular season title in a decade. UNI enters Friday’s noon MVC Tournament quarterfinal in St. Louis equipped with perhaps the nation’s most improved offense.

Flow is no longer the 100-level course from the summer of 2018 after players have invested additional time in the film room to make their offense click.

“People are watching film with coaches, watching it on their own so they know what they’re going to do within our offense and where they’ll have spots to attack or make plays,” MVC Player of the Year AJ Green said. “Understanding how teams are going to defend us differently, and what our reads are based off how they defend, it changes game to game.”

This transformation came with a test of patience for UNI’s 13th-year head coach. As losses piled up and the margin of defeat increased during non-conference play last season, Jacobson admits he considered going back to his old offense.

The Panthers dropped six of seven games against Division I programs entering their Missouri Valley Conference opener at Bradley. Those losses included embarrassing margins of 29 points at Utah State and 32 against South Dakota State and 23 against Iowa on neutral sites.

“It wasn’t that I didn’t think it could work, or that I didn’t believe that it could be good for this team,” Jacobson said. “We weren’t playing great in November and December. As a head coach that doesn’t feel like a great time to be trying something new. We need to be doing stuff that I know works.”

Jacobson’s staff convinced him to stick with Flow — the collaborative effort between assistant Erik Crawford and graduate manager Seth Tuttle that drew heavy influence from Tuttle’s exposure to international basketball in Europe.

“I appreciate the feedback from my staff,” Jacobson said. “Those guys were really good about saying, ‘Hey this is going to be good for us. We’ve got to stick with it and this is what we need to work on in practice so then we can get better at it, but it really fits this team.’”

Prior to Flow, UNI had been running basketball’s equivalent to a standard football huddle offense filled with a variety of set plays. Each possession featured anywhere from one to three screens in order to free up a player with a favorable match-up.

Flow is more like a football team that runs a no-huddle offense. All five players read, react and make cuts based on keys from the defense. The center is often in a quarterback position at the top of perimeter, leaving space for guards to get downhill off dribble-handoffs or screens without as much traffic in the lane.

“We aren’t necessarily calling a play each time they come down the floor,” Jacobson said. “Now the action is such where you’re learning why we do things.

“You’re learning how to make reads, so as that happens it continues to get better and better as the year goes on because the guys get more comfortable with the reads that they’re making. I’ve really enjoyed that part of it.”

Had a medical condition not forced center Austin Phyfe to redshirt, Jacobson admits it would have been easier to ditch Flow last season and run old sets to get the ball into the low post. Yet with Luke McDonnell and his thinner 6-foot-9 frame starting at the center position, the new offense was a better fit.

“Luke’s not a guy that you throw it to on the block, but he was really good in that spot (making decisions from the perimeter),” Jacobson said.

McDonnell remains a valuable piece of the puzzle. He explains the offense to teammates at his position and works with them, even though they’ve passed him on the depth chart.

“Luke is probably the most important guy to the whole thing,” Jacobson said. “This year he’s just as important as the five starters and (returners) Ty (Pickford) and JD (Justin Dahl) in terms of how our offense is running and how well guys are doing. He’s talking to the guys in practice all the time. He’s talking to them during the game.”

“One of my proudest moments in coaching was when Luke was helping James in November,” Jacobson said. “Here’s a fifth-year senior who was a starter and James is a freshman and his head is spinning. He’s playing really hard, but he’s got no idea of how this thing works and what he’s supposed to do.”

During his return season, Phyfe has enjoyed the way centers are incorporated into an offense that often has a five-man out feel.

“I just feel more active, more in the game sometimes instead of just sitting on the block or in the short corner,” Phyfe said. “Having the ability to make some plays and reads adds to my game and I’ve enjoyed it a lot.”

Phyfe’s more physical presence off rolls and work inside the low post — combined with Isaiah Brown’s development as an offensive player from a season ago — has freed up UNI’s trio of starting guards Green, Haldeman and Trae Berhow to light up the scoreboard from the perimeter.

During the first season in which the NCAA has moved the 3-point line back to the international distance, UNI currently ranks 23rd nationally with 9.4 made 3-pointers per game and at a 39.6% success rate that ranks fourth nationally.

This dynamic offense has resulted in a UNI team that is never out of a game. Four of the Panthers’ five losses are by six points or less. The fifth was a nine-point overtime setback after Green broke his nose at Loyola.

“I think the growth compared to last year is being able to trust our offense and stick with it,” Green said. “Everyone is getting comfortable with being aggressive and playing at a fast pace. The pace is really one of the main things out of it. If you get going fast, no matter how they’re going to defend you, you can get what you want to get and gain that advantage.”

This marks the first time since the 2005-06 season that two Panthers have been named to the first team.

UNI sophomore AJ Green has been named the 2020 Missouri Valley Conference Player of the Year.

The Panthers have ended a 10-year conference title drought in convincing fashion inside a sold out Knapp Center.

Northern Iowa's Spencer Haldeman finds a clear lane to the basket against Evansville during action at the McLeod Center.