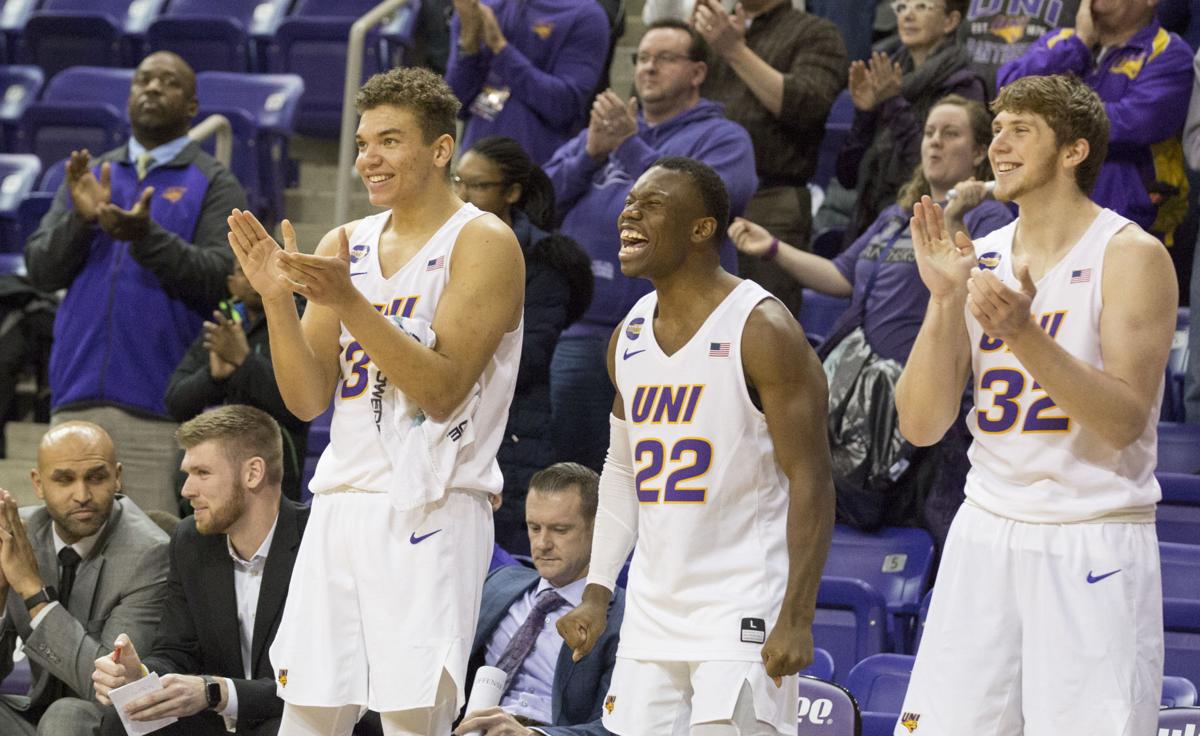 UNI's Noah Carter, Antwan Kimmons and James Betz cheer their teammates on from the bench during a win over Indiana State last season. The trio of sophomores will be key pieces to the puzzle for the Panthers during the 2020-21 season. 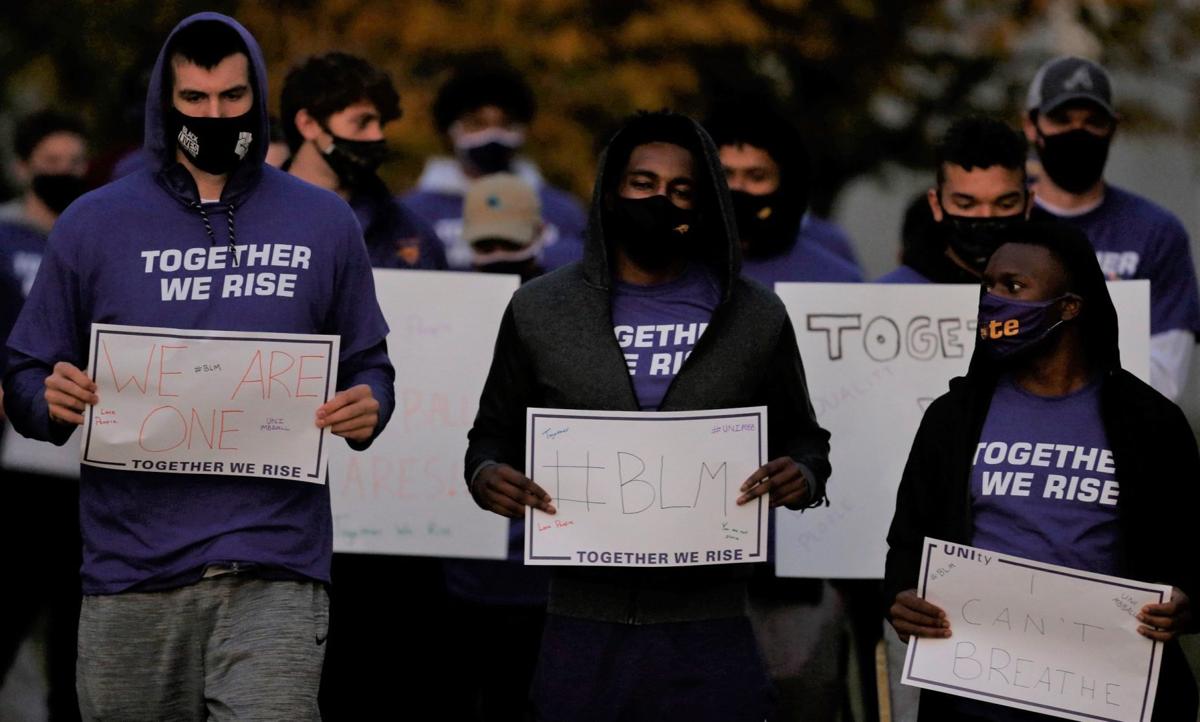 Bubbles have taken on a new definition this fall.

Current NCAA protocol dictates a positive case within a basketball team’s "inner bubble" of players, managers, coaching staff and trainer would facilitate a 14-day shutdown. As a result, members of that group will have limited exposure to those outside the UNI’s program.

“We’re going to keep everything to that group,” UNI coach Ben Jacobson said.

The Panthers will conduct their first official workout within the expanded 20-hour per week practice window today after taking Wednesday off. Team workout hours have climbed incrementally following the NCAA Division I Council's decision to delay the start of competition 15 days from Nov. 10 to 25.

A 12 hour-per-week transition period was established from Sept. 21 through Oct. 13. During this period, UNI's players focused on small group skill develop in addition to the annual process of building a defense and offense from the ground up.

It’s a different feel compared to seasons nearly two decades ago when holiday-level anticipation accompanied the opening day of practice.

“The first official day of practice was kind of like Christmas for basketball people,” Jacobson recalls. “That’s the day you really looked forward to as a player and you looked forward to it as a coach. … As players you were playing pick-up and working on your game a little bit, but you weren’t around your coaches. And as coaches, we weren’t able to be around the guys.”

Indeed, much has changed over the past 15 years with teams receiving some contact hours during the spring and fall.

UNI’s players certainly have had more to manage than teams in years past since returning to Cedar Falls last summer. Offseason work with strength and conditioning coach Jed Smith has the group poised to tackle extended workouts.

“I’ve been impressed with the dedication and determination and discipline our guys have shown with the amount of responsibility and the amount of time that they’ve had without us around over the last four months due to COVID,” Jacobson said. “I like where we’re at today in terms of a starting point.”

The Panthers have advanced to playing competitive 5-on-5 games at the end of workouts over the past 10 days. Jacobson said it would be hard to single out just one or two players that have caught his eye during these scrimmages, but here’s what he did reveal:

“I’d say Noah and the three freshmen probably are the ones that have maybe caught our eye a little bit more than the others,” Jacobson pointed out.

“What really stood out was his competitiveness and drive,” Jacobson revealed. “He at times dominated the pickup games defensively with his communication, his on-ball presence, his activity level.”

Pickford isn’t the only player standing out on defense.

While Berhow hasn’t been talked about in terms of the MVC's top defenders, the 6-foot-5 senior could soon enter that discussion. Last year’s lockdown effort at home against Southern Illinois is a game, in particular, that shows what Berhow can provide on the defensive end of the floor.

“He’s one of the best catch-and-shoot guys in the country,” Jacobson said. “Trae is looking forward to impacting the game in other ways. That would start with consistently playing at a high level on the defensive end.”

Backing up Phyfe at center, sophomore James Betz would be the first guy off the bench if the season started today. His grasp of the offense and shooting ability are assets.

Injury forced Cole Henry to take a redshirt last season. He’s a skilled ball-handler and passer for his size. Jacobson noted Henry’s biggest challenge will be getting in great game shape to be active in transition.

The next month extended will be a key time frame for sophomore point guard Antwan Kimmons.

“I’m excited for Antwan right now to see the growth that he’s going to make in the next five weeks as we get to that first game,” Jacobson said. “He’s right on that edge of getting to what I think is going to be a big jump forward in terms of being able to play with a high energy defensively, pushing it hard in transition and then taking on the responsibility of doing all those things without turning the ball over.”

Jacobson confirmed previous reporting that ties UNI to the multi-team event sponsored by Elevate Hoops and hosted by the University of Nebraska. Whether UNI ultimately plays in that event, scheduled to start Nov. 25, will depend on opponents.

The Panthers’ coach is hopeful matchups will get set this week, allowing the staff to move on with the remainder of its nonconference schedule.

Depending on whether UNI plays two or three games in Lincoln, Jacobson would like to schedule the remaining three or four nonconference games inside the McLeod Center.

UNI’s game at Richmond will still take place, but is likely to be moved back from its current Dec. 2 date due to the Nebraska trip. The Panthers will play New Mexico State at the Sanford Pentagon in Sioux Falls on Dec. 13 and at Marshall on Dec. 19.

In addition to the two players that tested positive for COVID-19 over the summer, Jacobson mentioned that a couple more players were quarantined following positive tests prior to Sept. 10. All have since recovered, returned for three to four weeks of workouts, and are doing well.

Basketball and wrestling will be among the first sports to return to UNI’s campus since last spring’s shutdown. Jacobson says he has enjoyed the opportunity to watch live sports again as part of a crowd while his son competes on the Cedar Falls football team this fall.

“I think we’re all ready for more of that. We’re certainly ready for it on our campus,” Jacobson said, addressing the return of live sports. “Panther Nation is ready to get back and be a part of it and add some normalcy to what’s been a very trying six months for reasons that are much more important than us getting back and playing sports.

“The livelihoods of so many people and their families have been impacted in a number of different ways.”

It was senior day for the UNI Panthers in its second to last home game this season.

UNI's Noah Carter, Antwan Kimmons and James Betz cheer their teammates on from the bench during a win over Indiana State last season. The trio of sophomores will be key pieces to the puzzle for the Panthers during the 2020-21 season.