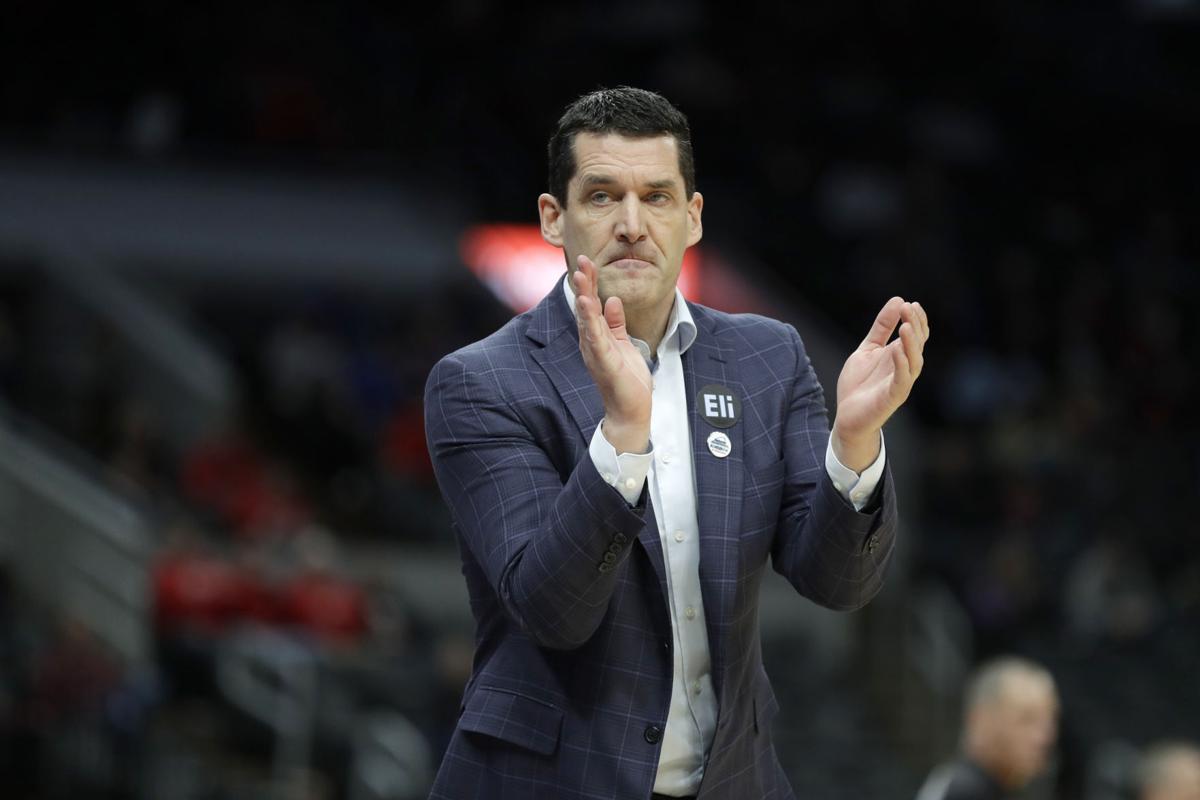 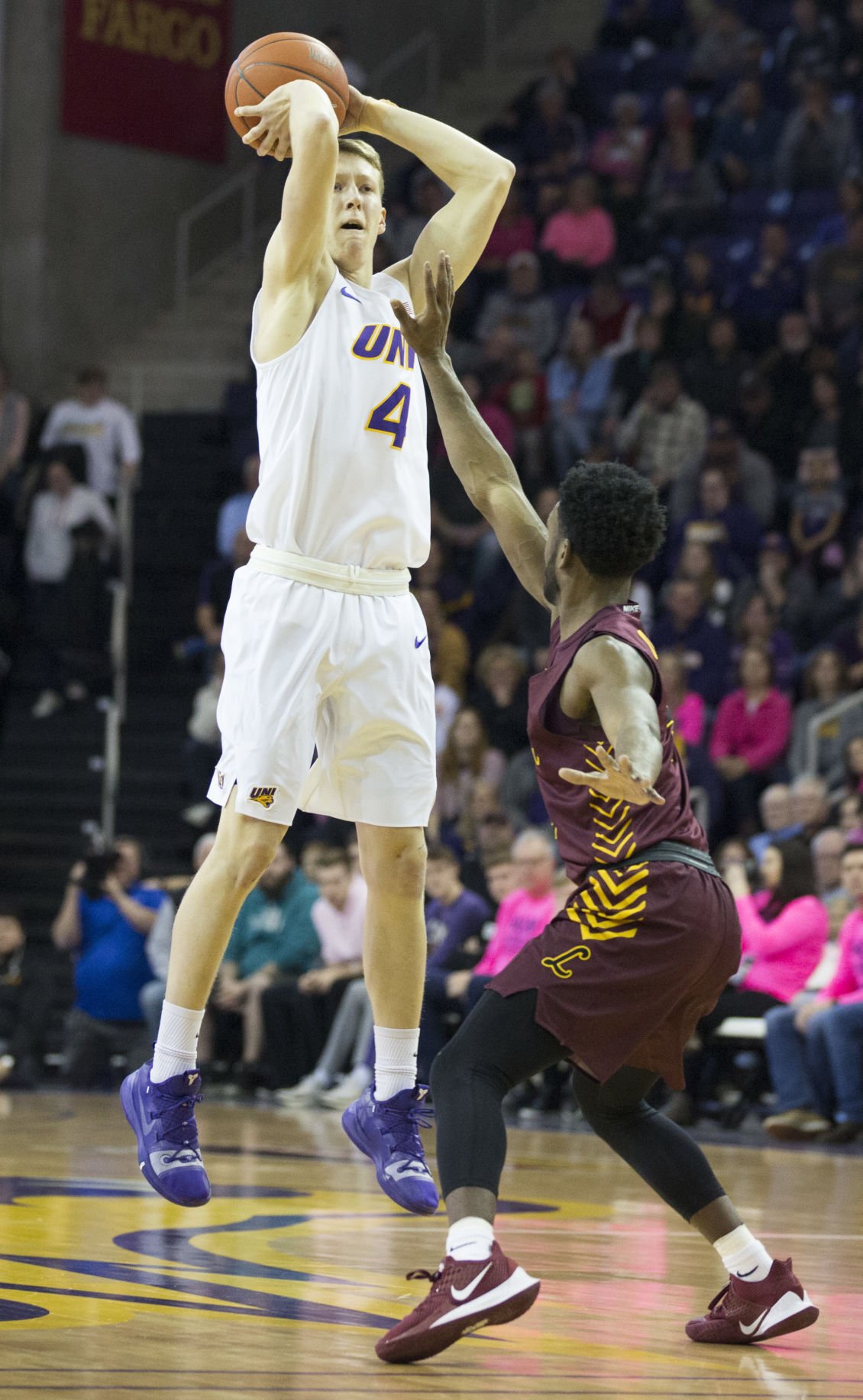 MVC player of the year AJ Green takes a 3-point shot against Loyola earlier this season.

With the details and poise of a veteran lawyer delivering his closing statement, the University of Northern Iowa’s 14th-year head coach made his argument on Monday for the Panthers to be included in the 2020 NCAA tournament field.

Jacobson, who serves as the Missouri Valley Conference’s voter in the USA TODAY men’s basketball coaches poll, admits he enjoys following the sport nationally and analyzing where teams sit. He’s spent the past two days looking at how UNI compares to 18 other schools in the mix for the NCAA’s final 10 at-large bids.

“The people that have completely dismissed Northern Iowa, I think that they’ve jumped the fence,” Jacobson said. “I think we are heavily in the mix.”

Echoing his immediate reaction after Friday’s quarterfinal blowout loss to a 20-win Drake team in the Missouri Valley Conference tournament, Jacobson reiterated that the NCAA selection committee’s job is to evaluate the entirety of each team’s body of work.

UNI (25-6) has dropped four of its games by a cumulative total of 16 points. The fifth was a nine-point overtime loss after MVC player of the year AJ Green broke his nose, and the sixth was the 77-56 defeat to Drake Friday in St. Louis.

“Each and every year, this is a four-month deal,” Jacobson said. “They’re going to take a look at everything that has happened over the course of four months.”

Comparing his team to others on the bubble, UNI’s coach highlighted an 11-1 nonconference record that included a 3-0 mark in true road games and two challenging neutral site tests. In total, UNI finished 8-4 on the road this season.

“We’ve won eight games on the road this year,” Jacobson said. “I’ve got 17 or 18 teams listed (in the at-large bubble) and that’s one of the things that stands out. Very few of them have won five or more road games. We’ve won eight of them.”

The next topic Jacobson addressed was the NCAA Evaluation Tool that replaced RPI as the selection committee’s primary metric two years ago. UNI’s NET ranking of 48 currently sits eighth on the list of 16 Lunardi bubble teams.

Within the NET, all Division I schools are divided into four quadrants. The Panthers hold a 4-3 record against opponents in the top two quadrants combined. A road win at Valparaiso nearly improved that mark to 5-3. However, the Crusaders needed to be ranked in the top 135 to qualify as a Quad 2 road opponent and fell from 135 to 139 over the last week despite reaching the MVC tournament final.

Opportunity is the word Jacobson used to describe those coveted games against Quad 1 and 2 opponents. While many of the other bubble teams have played more opponents in the top two quads, their winning percentage in those games is worse than UNI’s.

In addition to being unable to secure as many chances to play top tier programs, all of UNI’s games within the first two quadrants were located on a neutral site or the road. While power conference schools have largely built their resume with Quad 1 and 2 home victories, a UNI team that finished 16-0 inside its gym couldn’t find that caliber of opponent willing to travel to Cedar Falls.

“There was nothing available,” Jacobson said. “I’m trying to think what might have been. I don’t know that we’ve ever turned down a chance to play a Quad 1 or Quad 2 game.

“If you’re one of those teams that’s played 20 of them and said, ‘Hey, look how hard these games have been and look how many we’ve played and we went 7-13.’ We’ll take a home-and-home with all of them. We’ll start at their place.”

Just as important as the metrics, is giving the selection committee an opportunity to add a team to its field that the public wants to see play.

UNI’s coach points toward Green at point guard and first team all-conference center Austin Phyfe as a solid inside-out punch. Trae Berhow and Spencer Haldeman bolster one of the nation’s top 3-point shooting teams. Isaiah Brown is the MVC defensive player of the year, while a mix veterans and freshmen available off the bench adds depth.

The Panthers have ranked among the nation’s top 25 in offensive efficiency throughout the season.

“Our numbers are good and they’re solid across the board,” Jacobson said. “We’ve got some parts that a lot of teams don’t have -- in particular, when it comes to having a center and a point guard who are as good as we have, the shooting that we have, there aren’t a lot of teams that have that.”

While Jacobson realizes most analysts project UNI to host an NIT game next week, he’s confident that his school will be a part of the selection committee’s NCAA tournament conversation.

Mid-major Belmont was the final at-large selection into the 2019 NCAA field with a 46 NET ranking, five overall losses and a 5-3 record against opponents in the top two quadrants. Will this season’s Panthers win over the committee?

“Ten people are going to look at what has happened over four months and that’s for them to decide, when they get down to the last three or four in and the last couple that are out,” Jacobson said. “I know we’re in that group. We’ve got a terrific team and we’re good enough to play in the NCAA tournament.”

The University of Northern Iowa may be able to add a valuable defensive stopper and rebounder to its basketball rotation this season.

Instant volleyball rematches will be the status quo this spring inside the Missouri Valley Conference.

From on the bubble to inside the bubble, UNI basketball season nears

UNI is the preseason favorite within a Missouri Valley Conference that returns plenty of talent.

MVC player of the year AJ Green takes a 3-point shot against Loyola earlier this season.