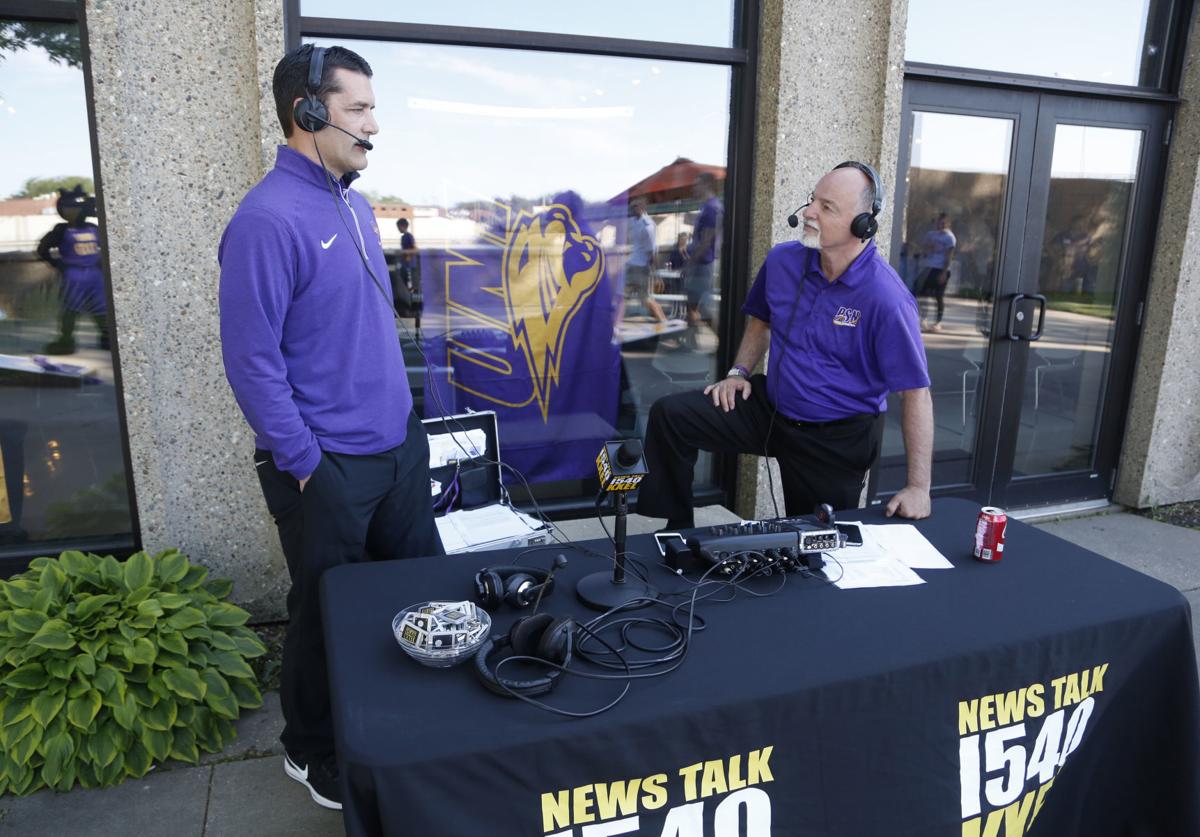 Northern Iowa mens basketball coach Ben Jacobson, left, talks with Gary Rima, right, on his radio show during the Panther Caravan at the Waterloo Center for the Arts Thursday, May 25, 2017, in Waterloo, Iowa. 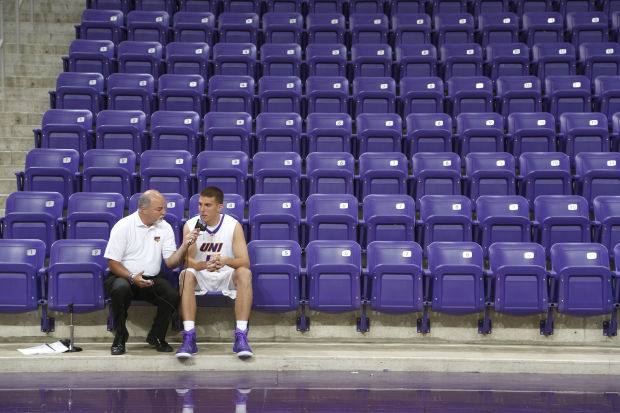 “On Press Row is … on the air!” Rima exclaimed, with passion that hasn’t faded in nearly 14 years spent occupying a weekday afternoon time slot.

The Cedar Valley’s longest running sports talk radio host then spent the next 10 minutes reading a heartfelt message to his listeners. He had weeks to think about how the moment, prepared a script Sunday and made some final edits prior to Monday’s show.

“OPR nation, I’ve got some news to share with you about this show,” Rima began. “On Press Row with the Sports Guy and the Sports Zoo, there really isn’t any way to say it, other than just to say it. Our show, our program here on NewsTalk 1540 KXEL has been terminated and will come to an end at the end of this week, this Friday.”

Rima will continue to serve as UNI’s play-by-play man for football and men’s basketball while also hosting a weekly call-in show with coaches Mark Farley and Ben Jacobson during their seasons.

The end of On Press Row was a secret that Rima had kept between himself and his wife, Marla Kay, since a meeting during the last week of February when NRG media and its ownership informed him the show would be terminated on March 27.

During an exciting time in the sports calendar, Rima kept his show’s focus on the Missouri Valley Conference regular season men’s basketball title UNI clinched one day after he found out his show’s run was coming to an end. He then shifted gears towards the upcoming MVC tournament and had planned to focus on March Madness before the coronavirus altered the landscape.

It was a tough secret to keep.

“It was hard,” Rima said during a Tuesday phone interview with The Courier. “I had to kind of bite my tongue a couple of times to not let it out. I just wanted to do it at the right time and I wanted to tell people myself on the show.”

Speaking with transparency and from the heart, Rima took a positive approach and expressed appreciation for the opportunity to work a dream job.

“Let me be perfectly clear, I am not mad at NRG media or KXEL for the decision they have made,” Rima told his audience. “How can I be? I’ve had the time of my life for the past nearly 14 years talking sports with you.

“Anyone who owns a business, they have the absolute right to make decisions that they think are best for them and their business, whether a person likes it or not. Sure I’m disappointed the show is ending, but I’m not going to be mad that it’s ending.”

In the form of a true sportscaster, Rima continued, “In the words of Dan McCarney when he got let go as Iowa State’s football coach, ‘I’ve had a hell of a run and I’ve enjoyed every minute of it.’”

Surprised by the news, Jacobson was the first caller into Monday’s show after the opening segment.

“What you did today reminds all of us what we already knew about you, you’re a Panther through and through and we appreciate you.”

Farley, an avid listener of “On Press Row,” was the second caller.

“You have been so special to our football team, our athletic department, our community,” UNI’s football coach said. “I just wanted to pick up the phone and call and make sure you know what you’ve brought to the community and what you’ve done, how you’ve influenced UNI athletics, and in particular what you’ve done for UNI football.”

UNI football broadcast partner Scott Peterson noted that he has known Rima longer than his wife, expressing surprise at the day’s announcement.

Many of the show’s longtime callers again made their voices heard.

Mark from Protivin spoke with emotion as he expressed appreciation for the format of Rima’s show that concentrated on sports within Iowa. Pat in Grundy Center, Dick from Cedar Falls, Joe in Dike — who once placed a call from a combine — and Drew in Waterloo were part of a steady flow of calls.

For Rima, this has been a lifetime passion.

His introduction to radio came at age 19 when KOUR in Independence hired him to broadcast an area football game of the week and two basketball games a week. Rima, who never attended college, was driving a Frito Lay potato chip truck through Northeast Iowa out of Strawberry Point at the time.

Within six months, Rima was hired as the fulltime sports director in Independence. He also served as a DJ from 2 to 5 p.m. and sold advertising in the morning.

KOEL in Oelwein then offered Rima an opportunity to be their sports director. He arrived at an opportune time when KOEL received exclusive rights to carry UNI Panther football and men’s basketball as their flagship station.

When Clair Rampton retired in 1993, Rima was promoted to UNI’s play-by-play man, where he developed signature catch phrases such as “Kaboom!” and “Oh baby! I love this team!”

Eventually, KXEL’s Tim Matthews offered Rima a chance to host his own sports talk radio show in the coveted 5 to 6 p.m. drive time slot. Rima worked as an outside contractor, selling five minutes of advertising to cover his salary and pay for his in-studio producer.

“One thing I sold Tim on and really wanted to do was put a heavy emphasis on Iowa sports talk,” Rima said. “There are so many national sports talk shows out there. Having 60 minutes Monday through Friday, I felt there’s enough exciting things going on from high school sports, college sports, Iowans in the pros that there would be plenty of good stories to talk about and people to interview.”

On Press Row has run continuously since July 31, 2006. The show expanded into a two-hour production from 4 to 6 p.m. a couple years ago. As the show grew, Rima incorporated his in-studio producers into co-host roles.

“I thought that really helped take the show to another level, just to get a second or third voice on the show — plus giving a young guy or young gal an opportunity to learn the business and get into it and see if it is something they really want to do,” Rima said.

Rima and his wife remain heavily invested as owners of the Cedar Valley CourtKings minor league basketball franchise, which they hope will have an opportunity to compete in a fifth season following a delay due to the coronavirus. The couple plans to travel to Florida later this summer to relax and get re-energized.

“I’m looking forward to taking a little bit of time off and just seeing maybe what does come up, or if there’s anything else out there,” Rima said. “I don’t want to stop doing UNI football and men’s basketball (play-by-play) just yet, but I think the end zone of that career is probably becoming closer to happening. I’d love to do it for another few years. Just having some time off will probably be good for me, too, right now.”

Ever positive, Rima closed his Monday show stating, “If it’s alright with you OPR nation, let’s have one last week together and reminisce about all we’ve talked about and done over the last 13-and-a-half years.”

Northern Iowa mens basketball coach Ben Jacobson, left, talks with Gary Rima, right, on his radio show during the Panther Caravan at the Waterloo Center for the Arts Thursday, May 25, 2017, in Waterloo, Iowa. 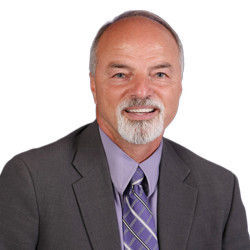