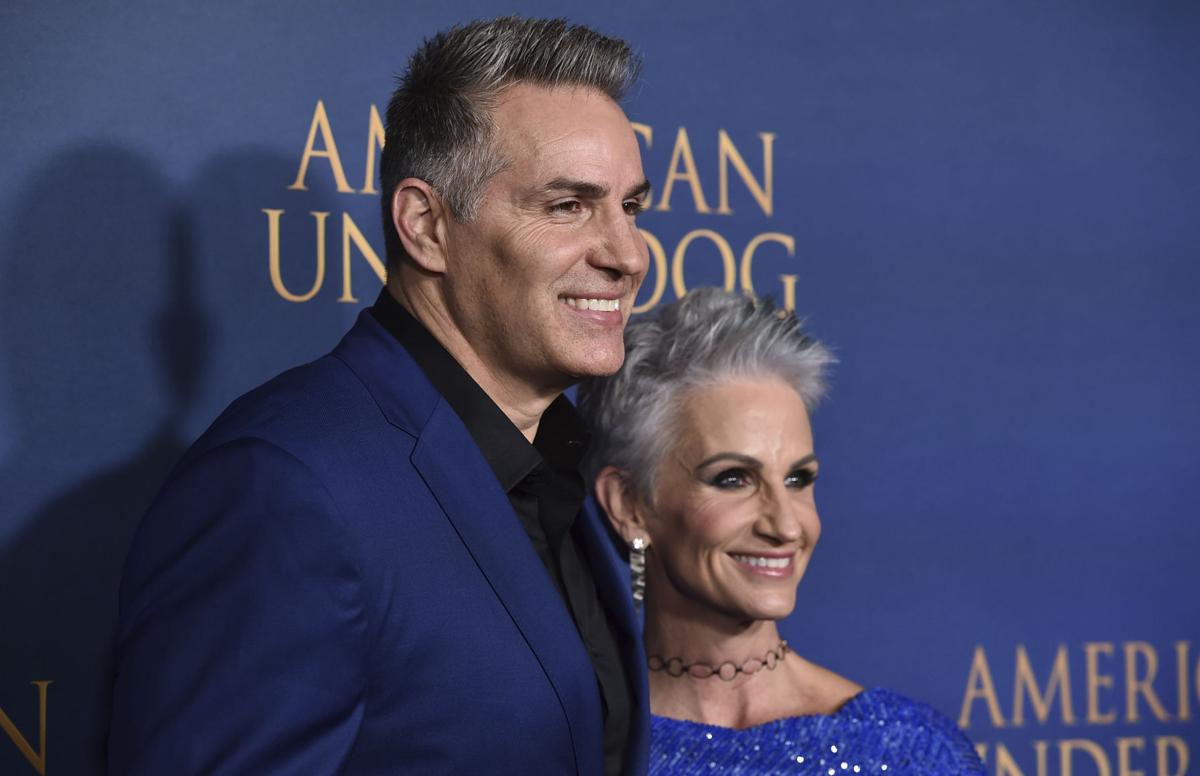 Kurt Warner, left, and Brenda Warner arrive at the premiere of "American Underdog" on Wednesday at the TCL Chinese Theatre in Los Angeles. 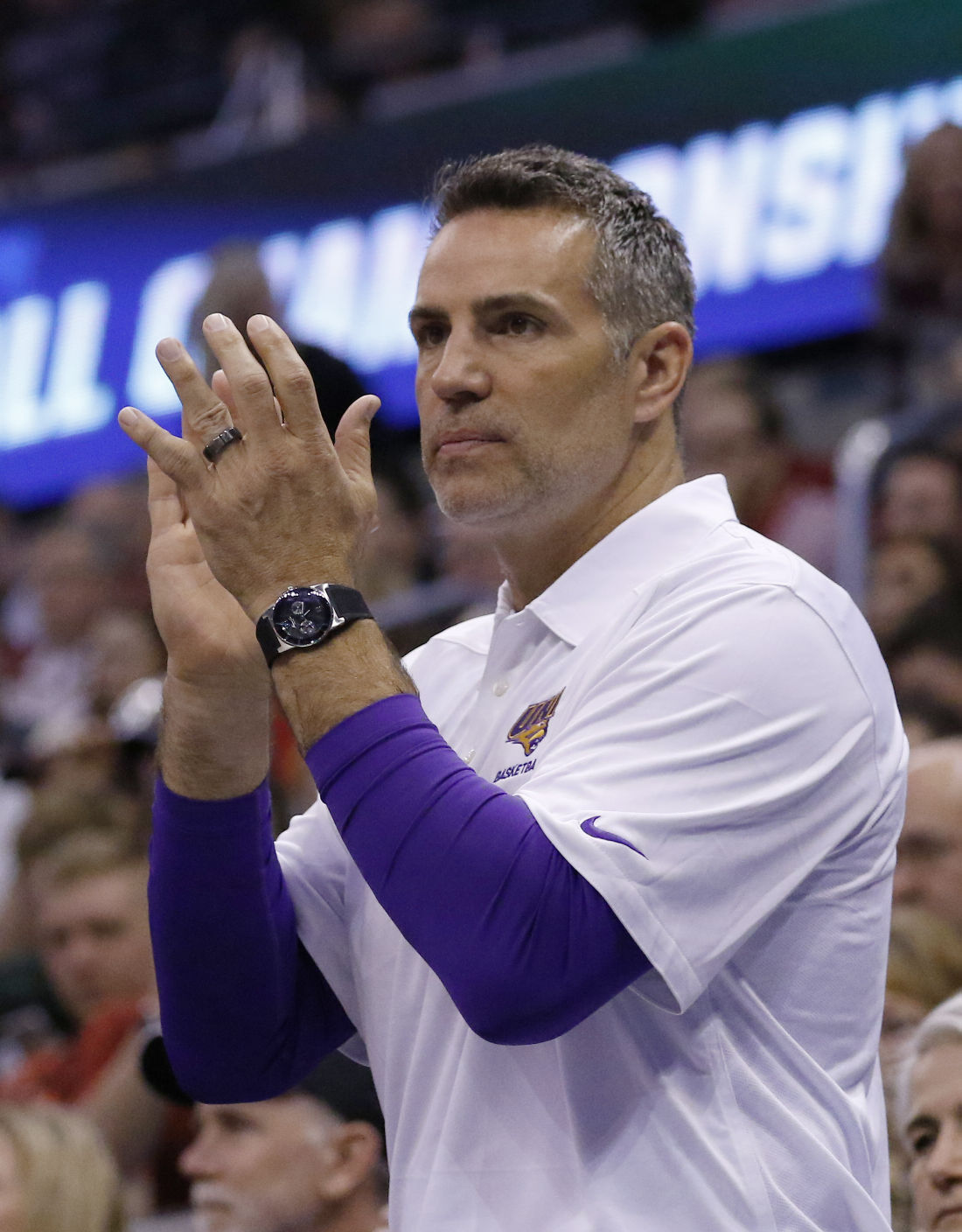 Former NFL quarterback and Northern Iowa alumni Kurt Warner cheers on the team in the first half during a second-round men's college basketball game in the NCAA Tournament in Oklahoma City, Sunday, March 20, 2016. (AP Photo/Alonzo Adams)

You don’t have to be an Iowan to know the legend of Kurt Warner. It’s a story told so often, you don’t even have to be a sports fan to have heard about it. Starting this weekend, however, Warner’s story is finally being told the one place it hasn’t yet been: The big screen.

A native of Burlington, Warner attended UNI where he spent three years as a backup before earning the starting job his final season. He went undrafted out of college and returned to Cedar Falls as a grad assistant for UNI while working the night shift stocking the shelves at Hy-Vee for $5.50 an hour. He then signed with the Iowa Barnstormers of the Arena Football League.

Warner spent the next three years in the Arena League, where he put together a Hall of Fame career and eventually earned a futures contract with the Rams. Warner began the 1999 season as the backup quarterback, but following a season-ending injury to starter Trent Green, he was thrust into the starting lineup.

The rest, as they say, is history.

Warner had what is still considered one of the best single seasons for a quarterback in NFL history as he led the Rams to a 13-3 record and a victory in Super Bowl XXIV over the Tennessee Titans. Warner went on to win the NFL regular season MVP two years later while leading the Rams to another Super Bowl appearance. He led the Arizona Cardinals to a Super Bowl appearance in 2008 before retiring from the NFL after the 2009 season. He was inducted into the NFL Hall of Fame in 2017.

Now, the story finally gets the motion picture treatment.

“We started talks pretty early after I retired, and what you kind of find out is that stories take time to write and get into production,” Warner told UNI officials, who granted The Courier permission to use their interview with him. “We went through several different writers, but I never felt like we got it right. If we are going to make this movie, this will be the story that we want to tell. Not just the glamorous parts, not just the football, but our story.”

It took years to finally put together a production staff and actors. Eventually, the cast was picked, including Adam Baldwin as former UNI head football coach Terry Allen.

“In your mind, you have a distinct view of what everyone is like, and you see the casting and think, ‘Seriously, you are going to have that person play them?’” said Warner. “But when you get around the actors or you see them on screen, the important thing is that they carry the essence of the person. You also can’t have 700 people in a movie, so sometimes you have to combine characters. When we went with the guys at Lionsgate, we did so because we trusted them. We had to step back and let them do their jobs, and I think they did a phenomenal job.”

There were months of prep work that went into production before filming was set to begin in the spring of 2020. That’s when things were put on pause due to the pandemic, which Warner believes actually helped the movie in the long run.

“Without a doubt, COVID-19 made the movie better,” Warner said. “They are never done until they are done. You never feel like you get it totally right, but any time you have to work on it, you have a chance to make it better, and I think we took those months to make positive changes.”

Eventually, the film was ready. It’s an experience that’s been both exhausting and rewarding for Warner. In the end, the only thing that matters to him is the impact the film ends up having.

“We called it ‘American Underdog,’ because it is not just my story,” Warner said. “This is my wife’s underdog story, my son’s underdog story. It is a story we need in our country right now. We feel like the timing is right, and it feels like everything is coming together to make something special.”

Kurt Warner, left, and Brenda Warner arrive at the premiere of "American Underdog" on Wednesday at the TCL Chinese Theatre in Los Angeles.

Former NFL quarterback and Northern Iowa alumni Kurt Warner cheers on the team in the first half during a second-round men's college basketball game in the NCAA Tournament in Oklahoma City, Sunday, March 20, 2016. (AP Photo/Alonzo Adams)