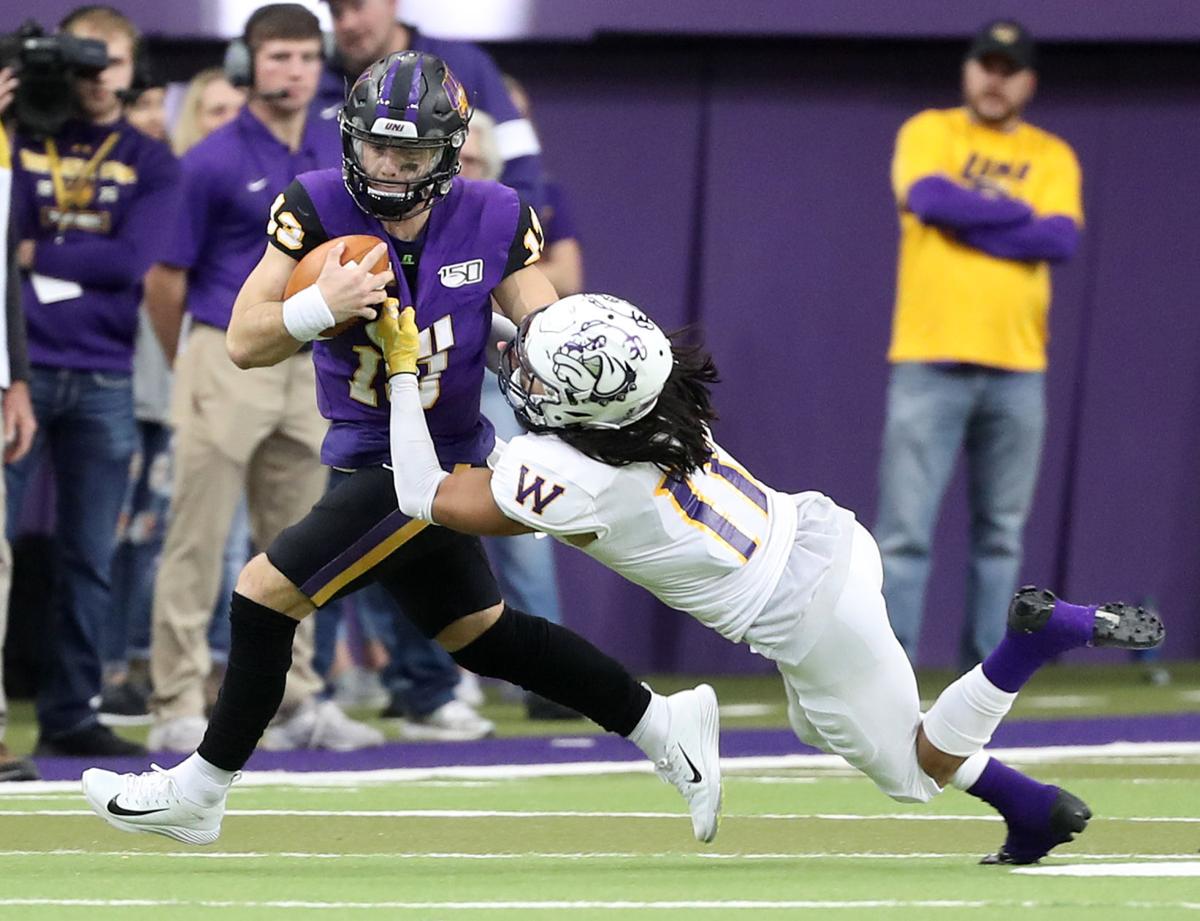 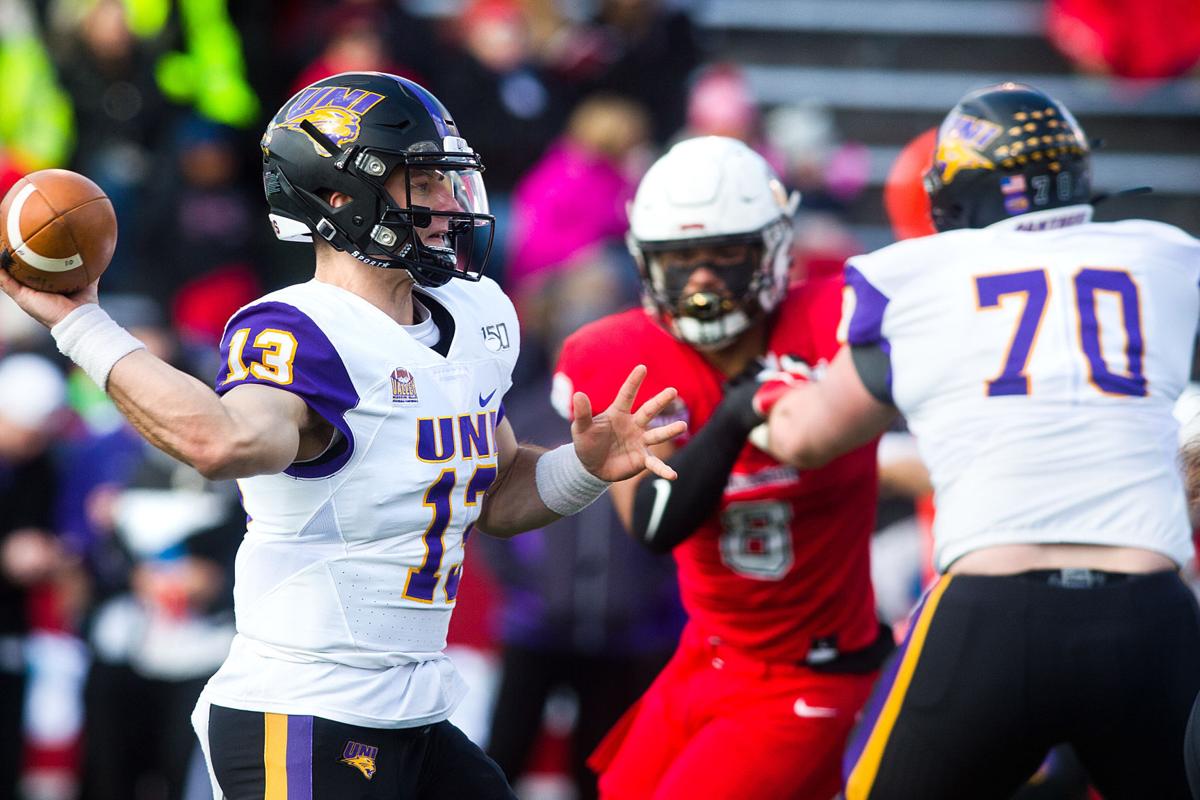 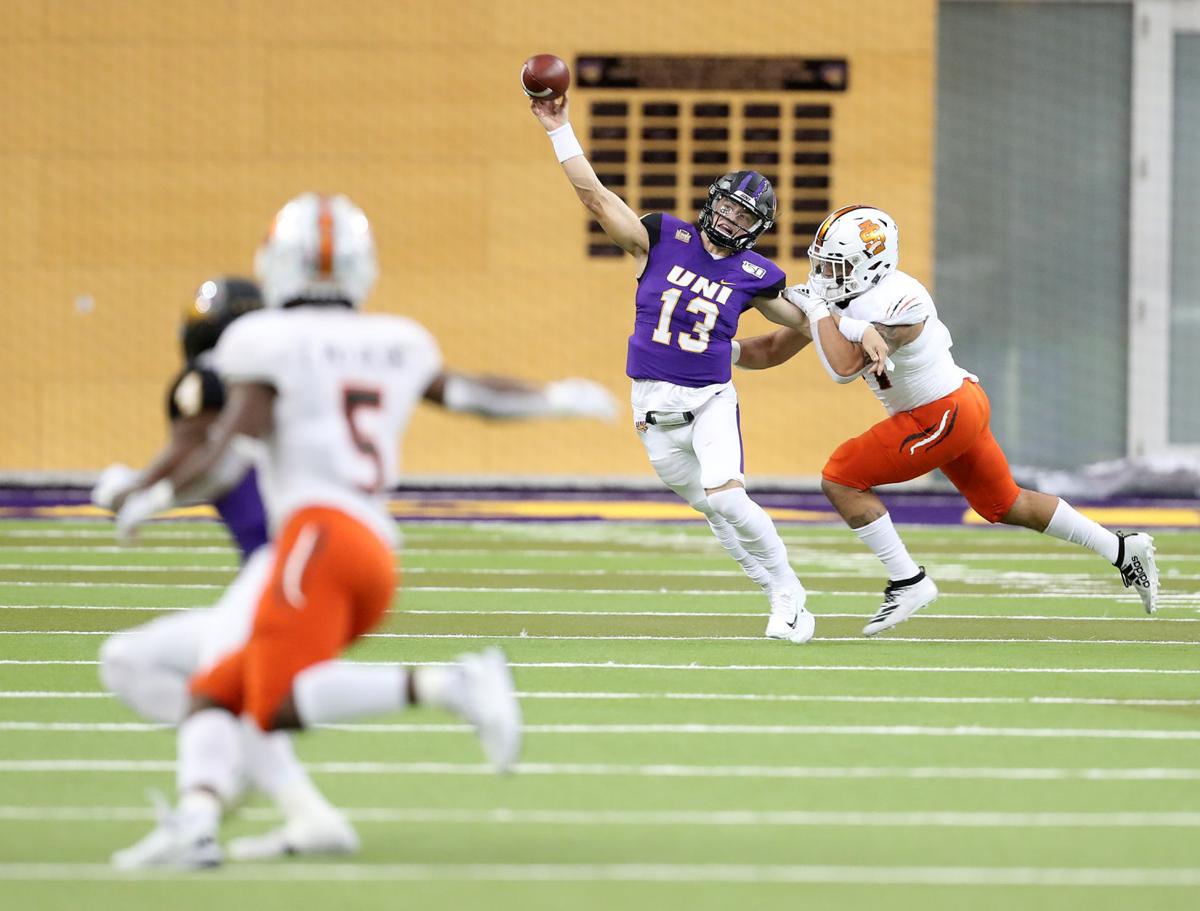 Northern Iowa quarterback Will McElvain fires a pass down field against Idaho State earlier this season. The Panthers host Western Illinois in their regular-season finale Saturday at the UNI-Dome.

CEDAR FALLS – To barbecue or not to barbecue?

That is a question University of Northern Iowa first-year quarterbacks coach Shawn Watson didn’t have a ready-set answer for when his wife, Anita, asked him about his plans for Labor Day weekend.

For the last 42 years, 38 of them as a coach, Watson has always been busy on Labor Day.

Watson is among a variety of college football coaches throughout the nation that suddenly received more free weekends after fall seasons were canceled in hopes of resuming play this spring.

“I tell you what that was a good question,” Watson laughed. “It is still weird. I’ve been coaching 38 years and I played four years of college and I’ve yet to have a Labor Day off so I don’t even know what that looks like.

Last night, Watson should have been tutoring Panther quarterback Will McElvain at Kinnick Stadium in UNI’s season opener against Iowa.

There is nothing Watson can do about not having games this fall, but like his UNI coaching brethren, the time is not going to waste. UNI is allowed 12 hours of work per week with its athletes to replace the lost practice time and prepare for a restart which is scheduled for January.

With perhaps the most talented quarterback room UNI has had in Mark Farley’s 20 seasons, Watson said there is plenty that can be accomplished.

“We are taking the hand that has been dealt us and we are going to get involved with things that we can control because you can’t control the decisions that were made,” Watson said. “It is challenging, but it is a good challenge and kind of a different way to get you stimulated for football, but it also allows you to be creative.

“Mark (Farley) has just been awesome. He does a great job of directing the program and challenging the players and coaches. It is a different time, but let’s make it productive so we can come out the other side of it better.”

What Watson is really relishing is his time in the classroom — not only with McElvain and using a fine-tooth comb going over the sophomore’s 15 starts last season — but he’s excited about being able to mold the quarterbacking minds of redshirt freshmen Justin Fomby and Nate Martens and talented incoming freshman Da’Vonshai Harden.

Part of the skills period is spent in the meeting room, and Watson said he’s already seeing gains.

“Those meetings are where it all begins for a quarterback because the quarterback’s development really begins in the classroom,” Watson said. “The schematics is what everybody loves to coach and teach, and I found in my career what really develops an elite quarterback is teaching them how to make decisions.”

Watson, a native of Carbondale, Ill., has a track record of developing elite quarterbacks. He coached Teddy Bridgewater for his entire career at Louisville. He helped new UNI wide receivers coach Joe Ganz set Nebraska season passing records, and most recently was part of developing Jake Fromm at Georgia.

Watson has been either an offensive coordinator or quarterbacks coach at nine total Power Five schools.

But it was Watson’s time at Miami of Ohio where he developed much of his coaching philosophy. Watson was at Miami from 1987 to 1993, and it just happened that his neighbor was Weeb Ewbanks — the NFL Hall of Fame coach who led the Baltimore Colts to NFL championships in 1958 and 1959 and the New York Jets to the Super Bowl title in 1969.

“Coach taught me how to be a teacher in the classroom,” Watson said. “One of the first meetings I had with him in the classroom I was teaching football, teaching plays, and he said, ‘Son, that is all fine and dandy, but you forgot the most important part and that is teaching them defenses.’

“So it’s a quarterback school, really. We are going to teach them all the details of the game and fundamentally improve them mechanically and footwork wise, too.”

Watson says he’s got a room full of quarterbacks that want to absorb as much knowledge as they can get their hands onto and he loves that.

“I really like our room and I’ve told Mark that,” Watson said. “It was part of the draw to come here. These guys all have great character and are highly competitive with each other in a good way. All and all, they have been a joy to be around.”

While Fomby, Martens and Harden are still tapping into an abundance of talent they possess, McElvain has a track record that Watson can review. While he was impressed with the film he saw, he believes McElvain can play much better, much smarter and much more efficient.

A McElvain stat that sticks out to Watson most is his 53% completion rate.

“The majority of my kids have been in that 68% range and I know there is a lot of good football there for him,” Watson said. “I’m building a tape of Will and I will take a lot of his film and I will take film of Teddy Bridgewater and put it beside him in the same cutouts.

“I will probably put Jake Fromm in there, a kid I had at Georgia last year. Then I will probably pick an NFL quarterback and put him in there too, and just show Will and them throwing the same routes and here are some things I want you to work on fundamentally to help you drive the ball on these throws.”

Watson feels the film sessions are capable of both providing confidence to McElvain and giving him areas to work on improving.

“Will does a lot of good stuff, really good things, but with this film he can walk away and say, ‘Wow, I do this like all these guys and they are real good players.’ And then there are things he will see that he’s not doing and can work on and it will help him grow and enhance him as a passer.”

“We have a ways to go, but I love what I have in terms of want to and character.”

Northern Iowa quarterback Will McElvain fires a pass down field against Idaho State earlier this season. The Panthers host Western Illinois in their regular-season finale Saturday at the UNI-Dome. 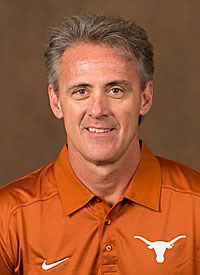