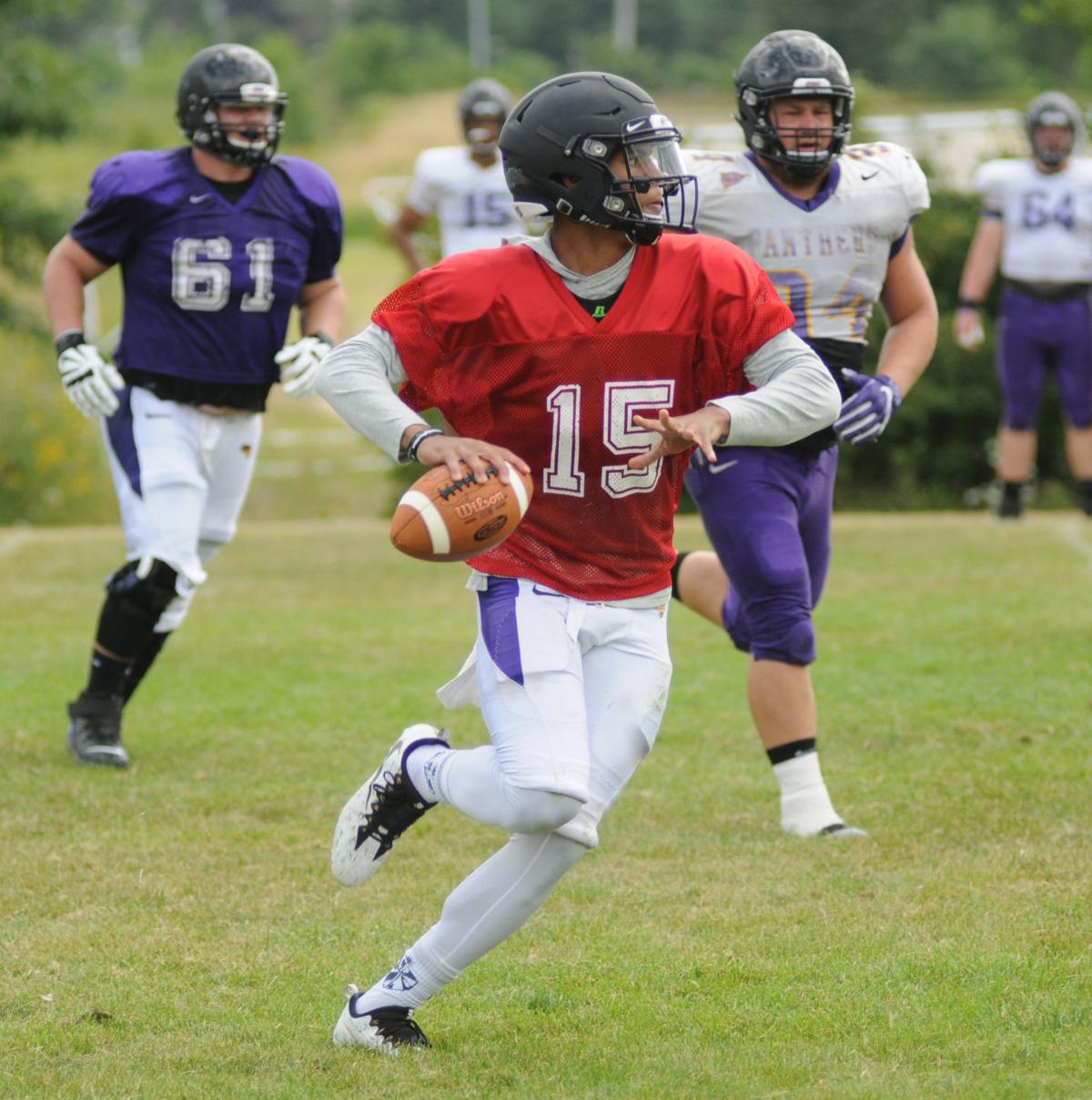 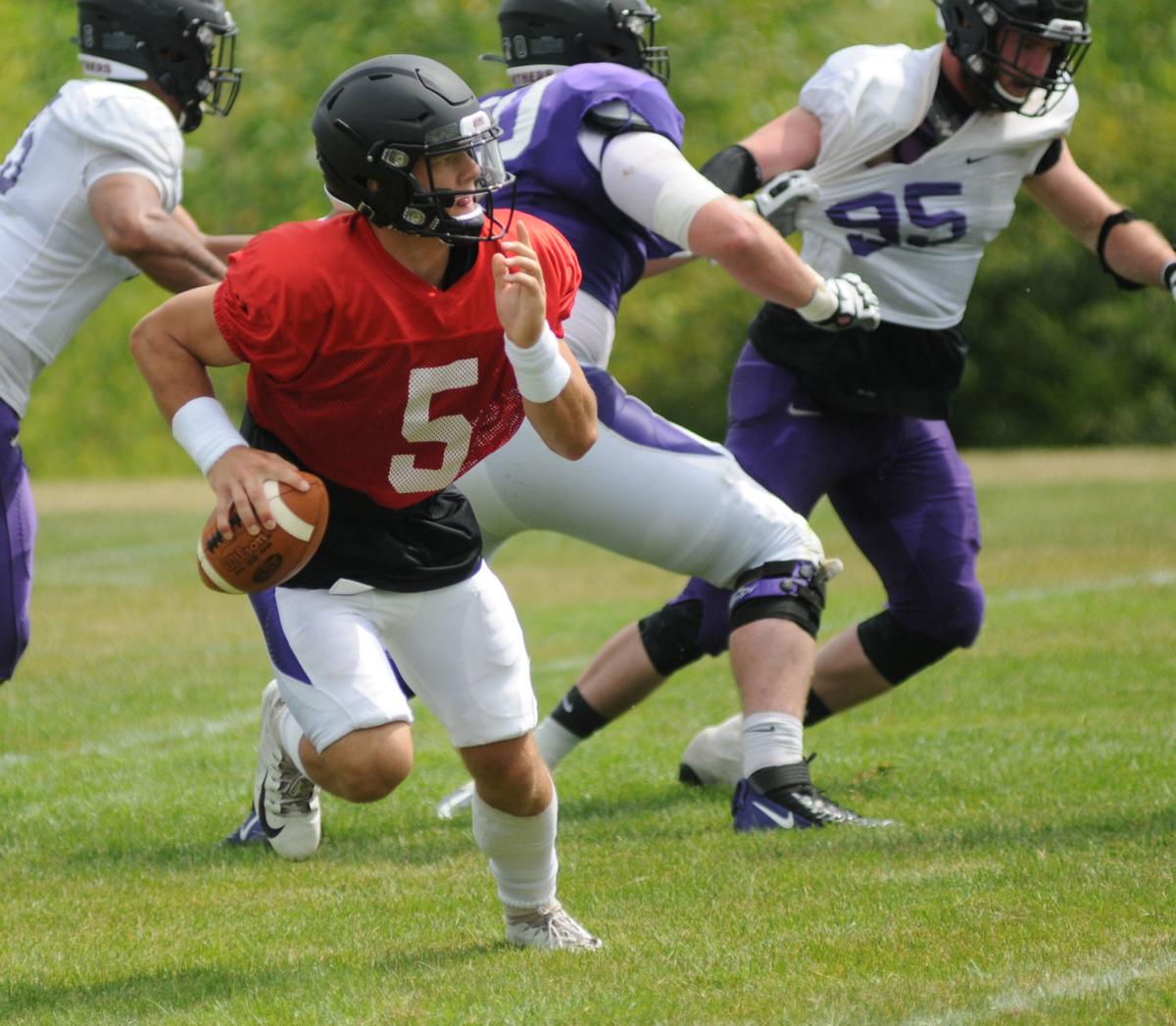 Quarterback Will McElvain scrambles during a recent Northern Iowa scrimmage.

Those three phrases are written on the playbooks of each University of Northern Iowa football player.

Saturday, following a 3-hour, 15-minute practice that featured a mostly live 65-play scrimmage, the Panthers met at least two of those goals.

“But that is part of the game and you have to be able to put it all together and play faster.”

Based on his initial observations, Farley said what he and his staff saw Saturday combined with Thursday and Friday practice sessions will shuffle the depth chart a bit.

“I think we found out a lot about our football team and found out a lot about the work that still needs to be done,” Farley said. “People have earned their way to a higher role, and now it’s let them take that and see what becomes of it. And it will be for somebody who maybe needs to pick up his game and see how he takes on the challenge if he has gone down on that depth chart.”

One big question was the quarterback play. All four — Jacob Keller, Will McElvain, Nate Martens and Justin Fomby — got reps, with Keller and McElvain getting the most action.

Both players threw interceptions and both threw touchdowns passes, with Keller also rushing for a score.

“I think head-to-head, just looking at it, Keller came out slow,” Farley said. “The positive for him is he regrouped and finished very well. McElvain came out a little more consistent start to finish.

Farley was quick to add that both Martens and Fomby have shown they belong.

Farley said he will name a starter a week before the Panthers open at Iowa State. He wants to see more consistency over a bigger body of work which means the next six practices will put him and his offensive staff closer to a decision.

TRUE FRESHMEN SHOWING UP: Three true freshmen have shown enough early that if UNI were to open its season tomorrow they’d find roles on the field.

The big standout Saturday was defensive back Omar Brown of Minneapolis. The 6-foot, 195-pound Brown, who played at Minneapolis North, had a pair of interceptions during the scrimmage, returning one for a touchdown, and at least one other pass break-up while running with the No. 2 defense and playing behind junior college transfer Micah Mayberry at right corner.

Additionally, 6-foot-3, 243-pound tight end Maverick Gatrost of Center Point, and 6-foot, 215-pound running back Nick McCabe of Caledonia, Minn., who spent the summer with the University of Minnesota football squad before landing in Cedar Falls, also have opened the eyes of UNI’s staff.

“Omar has had a good camp,” Farley said. “McCabe and Maverick also have had good camps. Those are the ones just after the last three days. They are staying with the older guys. That is not to say more won’t come along, but they’ve gotten caught up in the mental part of it, but those three have probably had more opportunities and shown a little more consistency.”

NEXT MAN IN: Preseason All-America tight end Briley Moore has missed most of camp with a hamstring injury. The Panthers are also without projected third-stringer Jayden Scott, out with an undisclosed injury.

That has allowed back-up Tristan Bohr to take a leading role on the offense and given Gatrost a chance.

“Having Briley get a hamstring injury was probably the best thing that happened to our offense and our offensive coaches,” Farley said. “They’ve had to learn to play without him. We are going to get Briley back soon, but it strengthens our team because Tristan and Maverick had to take leading roles.”

GRAHAM BACK AT RECEIVER: Senior Aaron Graham, who all spring played at running back where he starred in high school, has taken the bulk of his camp reps at wide receiver.

With the Panthers having good depth at running back with senior Trevor Allen, sophomore Alphonso Soko, sophomore Tyler Hoosman and the emergence of McCabe, the offensive staff wants to get Graham and his playmaking abilities on the field as much as possible.

A look at who UNI plays this year.

The University of Northern Iowa football team held its media day Wednesday at the UNI-Dome.

Generally speaking, the legalization of sports wagering in Iowa will heighten awareness, but it won't change much for the state's NCAA athletic programs.

Ryan Mahaffey has returned to the UNI program to serve as the Panthers’ offensive coordinator and tight ends coach.

Friday, Farley confirmed with the Courier that red-shirt freshman Will McElvain of Des Moines will start for Northern Iowa in its regular-season opener next Saturday at Iowa State.

Quarterback Will McElvain scrambles during a recent Northern Iowa scrimmage. 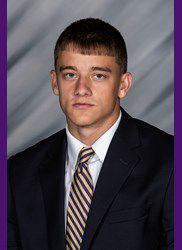 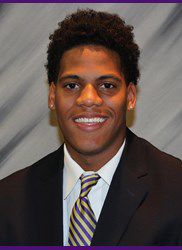