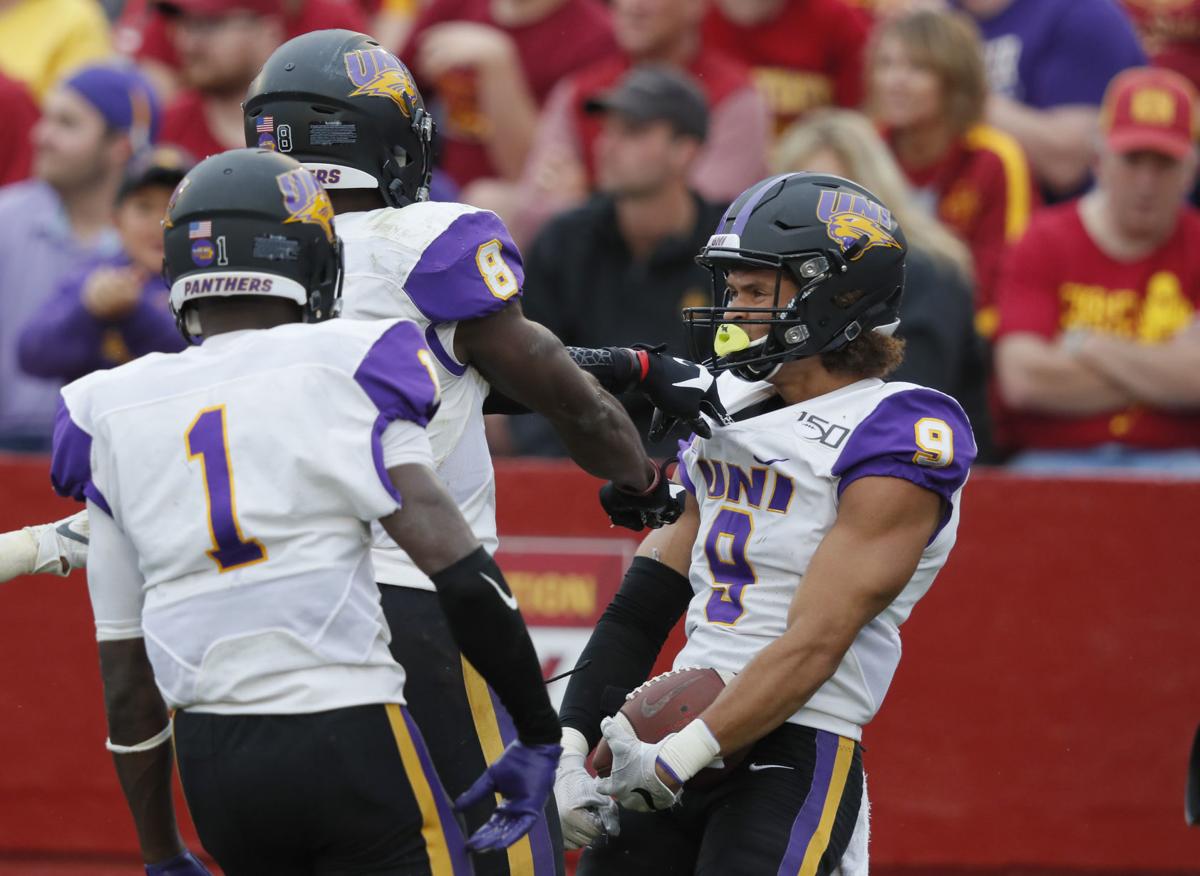 Northern Iowa defensive back Xavior Williams, right, celebrates his touchdown from a fumble recovery with linebacker Spencer Perry during the second half of Saturday's game in Ames. Iowa State won 29-26 in triple overtime. 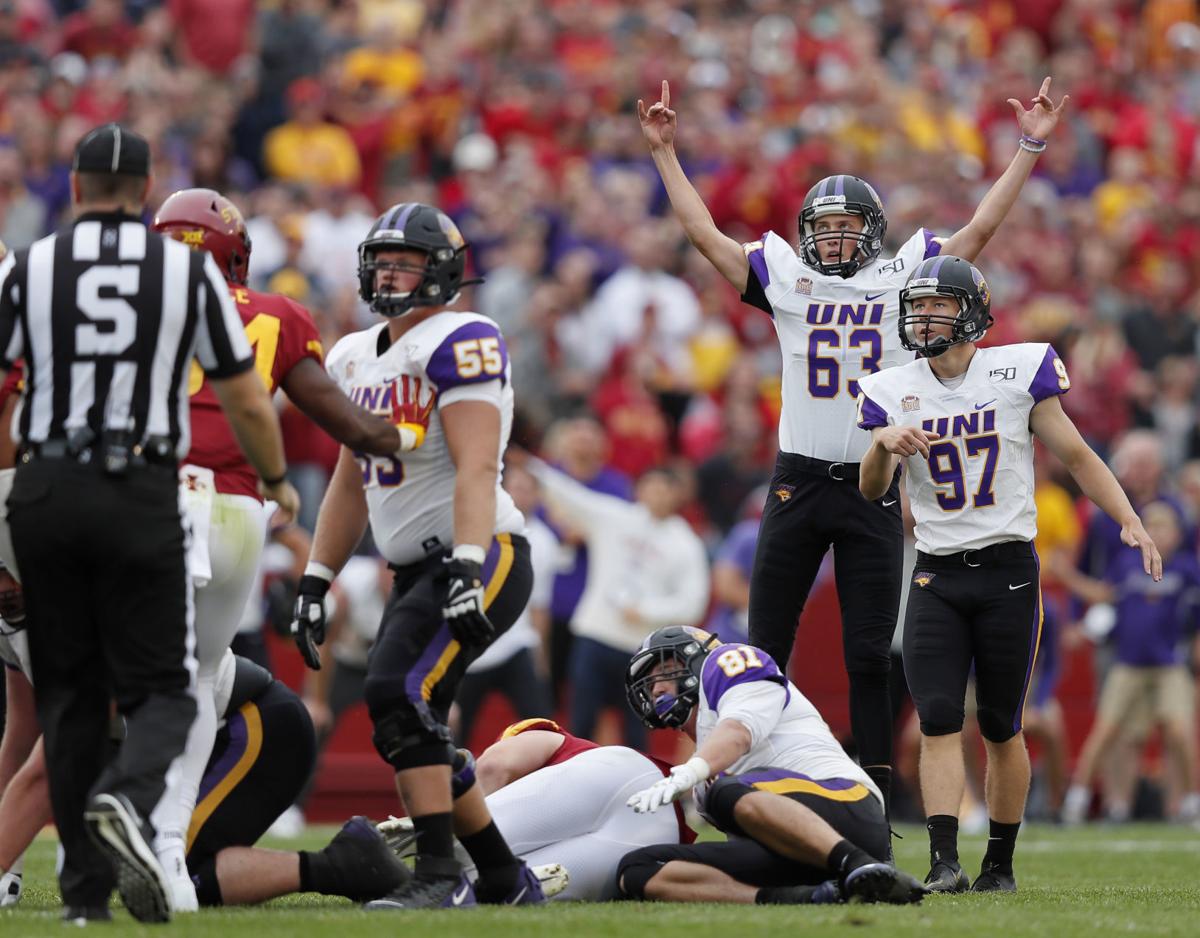 UNI placekicker Matthew Cook (97) watches as his field goal splits the uprights during the first overtime Aug. 31 at Iowa State. Cook finished his debut 4-for-4 with a 50-yarder.

If there was an overwhelming theme in Northern Iowa’s postgame press conference Saturday after losing a 29-26 triple overtime game to No. 21 Iowa State, it was the Panthers weren’t ready to accept pats on the back.

It didn’t matter that UNI nearly pulled off its first victory over a FBS Top-25 opponent.

The fact of the matter to UNI was it ended the day 0-1.

“If we can take this game and go from it, and not accept the fact that we played good ... we didn’t come down here to play good, we came down here to win a football game,” Panther head coach Mark Farley said.

The overall sense given from Farley prior to Saturday’s opener was that he liked the total composition of this team and couldn’t wait to see them on the field against an opponent.

Asked after the loss if he felt his team validated his initial thoughts on them, Farley didn’t give the Panthers a complete stamp of approval.

“We still need to improve,” he said. “That is what we need to take away from this. We played a good football team, played a good game. Now, improve and move to the next football game.

“There are a lot of things we can learn from today,” Williams said. “I played free safety for the first time, ever. I have things I can learn. The offense has things to learn, and we just get better from here.”

Much of the postgame was spent talking about quarterback Will McElvain and what his first start revealed.

“The defense played against one of the best offenses (in the Big 12) and with a ton of weapons and went out there and held them ... they played a great game,” McElvain said. “We have to put more points on the board at the end of the day. You can’t ask for anything more than what the defense did. They played great.”

EXPECT MORE OF THE SAME: Throughout the game, the Cyclones rushed just three defenders and a fourth, one of ISU’s three starting linebackers, either Marcel Spears, Mike Rose or O’Rien Vance played spy on McElvain.

That basically meant that player had no coverage responsibility and his only job was to shadow UNI’s elusive QB. That trio did a great job and accounted for seven tackles for loss.

In addition to that, ISU dropped had seven defenders to defend four or five receivers depending on the play call and there just wasn’t a whole lot of openings for Panther receivers.

Future Panther opponents are going to try to duplicate this look against UNI.

UNI will not face a better defensive front seven than the one ISU threw at them. The Cyclones led offensive-happy Big 12 in scoring defense (22.9) and ranked 14th nationally last year in rush defense (115 per game).

Running backs Trevor Allen and Alphonso Soko saw holes open and close fast limiting them to 31 yards on 20 carries, but both have proven big-play ability.

The cure for the run game may come next week against Southern Utah. The Thunderbirds gave up 331 rushing yards to UNLV Saturday and seven rushing touchdowns.

THE SAFETIES: There is no doubt Williams plays at an all-American level at cornerback. After Saturday’s game, that is ditto for free safety.

If Roosevelt Lawrence and Omar Brown can continue to be solid at corner, which would allow defensive coordinator Jeremiah Johnson to keep Williams at safety, that will be a good thing for the Panthers.

The Burlington native was all over the place against the Cyclones and made four noteworthy plays, including the 53-yard touchdown return on Brock Purdy’s fumble.

Williams broke up three passes, one on a fourth-down play to Chase Allen and two more in the end zone preventing touchdowns.

Senior Christian Jegen also played a fine game with 15 tackles and it seemed like he was in on a lot more.

OVERALL DEFENSE: Defensive ends Seth Thomas and Elerson Smith were disruptive forces all game, and Jared Brinkman, Tim Butcher and Brawntae Wells, who played all over that front, were notable presences. If there were worries following the graduation of Ricky Neal and Karter Schult, in back-to-back years — or the loss of Bryce Douglas in the middle from last season — there shouldn’t be worries now.

First-time starter Spencer Cuvelier was second on the team with 14 tackles from his middle linebacker position. He’d probably admit he needs to be quicker on his reads and relay his defensive calls faster, but the game should speed up with him and that group with more game experience.

Three stars1.) Matthew Cook. The true freshman was 4-for-4 on field goal attempts, including one from 50 and another from 49. The 50-yard field goal was the longest since Michael Schmadeke nailed a 50-yarder against South Dakota in 2015. His game might also be remembered for him hitting a cheerleader with one of his kickoffs.

2.) Xavior Williams. Looked super good in his first start at free safety. Does he stick there going forward and not move back to corner? Time will only tell, but it might be hard to switch him back.

3.) Spencer Brown. JaQuan Bailey, a preseason all-Big 12 pick, still needs one sack to become ISU’s all-time sack leader. How often was his named called Saturday, not often, and the 6-foot-9, 321-pound junior was a major reason for keeping Bailey off McElvain’s back.

UNI traveled to Ames for the first game of the season.

Woodbury Central’s Wade Mitchell had two requirements as he was narrowing down his college search.

Cedar Falls volleyball coach Matt Johnson recorded his 500th career victory over the weekend, but his Tigers were not going to be satisfied with that number.

Panther head coach Mark Farley said Tuesday he didn’t have a complete report on the extent of Moore’s injury.

University of Northern Iowa basketball fans won’t have to wait long to see the Panthers in action against NCAA Division I competition this season.

After a long process that stretched from concession personnel all the way up to University president Mark Nook, Northern Iowa announced Tuesday it will begin selling alcohol at home football and men's basketball games during the 2019-20 season.

Northern Iowa utilizes talented Xavior Williams all over the field.

The UNI football team knows it's time to leave last weekend's near upset of Iowa State behind.

Northern Iowa defensive back Xavior Williams, right, celebrates his touchdown from a fumble recovery with linebacker Spencer Perry during the second half of Saturday's game in Ames. Iowa State won 29-26 in triple overtime.

UNI placekicker Matthew Cook (97) watches as his field goal splits the uprights during the first overtime Aug. 31 at Iowa State. Cook finished his debut 4-for-4 with a 50-yarder.