That likely goes for the staffs of all eight teams that remain alive in the FCS playoff quarterfinals.

But with a Friday date against second-seeded James Madison (12-1), the sixth-ranked Panthers (10-4) have almost zero time to waste as they prepare to face the Dukes.

Monday at his weekly press conference, Farley joked about the loss of sleep, saying he had to wear his glasses because he could not get his contacts in.

“It is a different hurdle,” Farley said of the Friday game, which will be televised on ESPN2 at 6 p.m. “When you are in the playoffs, you have to turn these things over more quickly anyway.”

Following what his team did Saturday in its 13-10 win at South Dakota State in order to get to the quarterfinals, a little lost sleep is a small sacrifice.

“You are giving every ounce of energy to them to make this happen for them,” Farley continued. “You have a group of seniors that this is their last run, this is it. We want to give them every opportunity … you want to do everything possible and beyond that to take care of the guys you have and make the run for the team you have.

“The effort they gave the other day makes you want to work harder for them because they gave a tremendous effort out in Brookings.”

Farley said he will try to keep to UNI’s normal game week schedule, meaning Monday was an off day for the Panthers and they will practice Tuesday and Wednesday before leaving for Harrisonburg, Va., on Thursday.

“I didn’t want to change anything just because they moved the game up,” Farley said. “You are going to lose Thursday and Friday because of game day and travel so you will lose those. That is where we are going to have to be creative to get them ready to play.”

As far James Madison, Farley puts them in the same stratosphere as North Dakota State.

The Dukes are in the playoffs for the sixth consecutive season and played in back-to-back national championship games in 2016 and 2017. They beat Youngstown State, 28-14, in 2016 for the school’s second national title, and lost to North Dakota State a year later, 17-13. They were upset by Colgate in the second round of the playoffs last season.

James Madison ranks No. 1 in the FCS with its 44.1 points per game average, and it ranks third nationally in scoring defense (16.1) while leading the nation in rush defense (65.1).

Pitt transfer Ben DiNucci has completed 71 percent of his passes while throwing 24 touchdowns against four interceptions. Wide receiver Brandon Polk, a transfer from Penn State, has 61 catches for 1,062 yards and 10 scores, and JMU has a stable of running backs led by Percy Agyei-Obese and his 18 rushing touchdowns. DiNucci has rushed for better than 600 yards, as well.

The defense is led by two Buck Buchanan Award finalists in defensive ends Ron’Dell Carter and John Daka. Carter, a transfer from Rutgers, and Daka each have 24 tackles for a loss.

“They are a very strong football team and that is why they are 12-1 and ranked No. 2,” Farley said. “It is like playing North Dakota State. It is in that bracket of talent and aggressiveness and discipline within their team.”

NO INJURY NEWS: Farley would have loved to say Monday that tight end Briley Moore and receiver Isaiah Weston will play Friday against the Dukes.

Instead, Farley said nothing has changed from Saturday on the status of those two, as well as that of running back Tyler Hoosman or wide receiver Deion McShane.

“I seriously don’t know,” Farley said. “I will have a better feel for it tomorrow whether it is Isaiah. Briley or Tyler. I got a report yesterday, but it didn’t tell me anything I didn’t already know.”

Moore, who has not played since injuring his shoulder in the season-opener at Iowa State, still has several protocols to clear before he can play, according to Farley, although his return is close.

BRING UMBRELLAS: There is a 40 percent chance of freezing rain in the Harrisonburg, Va., area Friday night with a high of 38 degrees.

IOWA CITY — In a quirk of the schedule, the Iowa basketball team plays only one home game between Thanksgiving and Christmas this season. 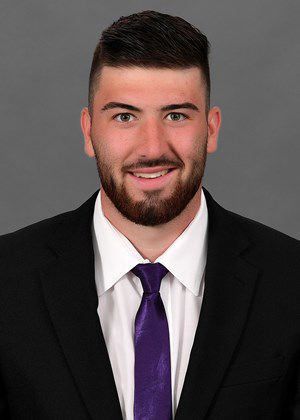