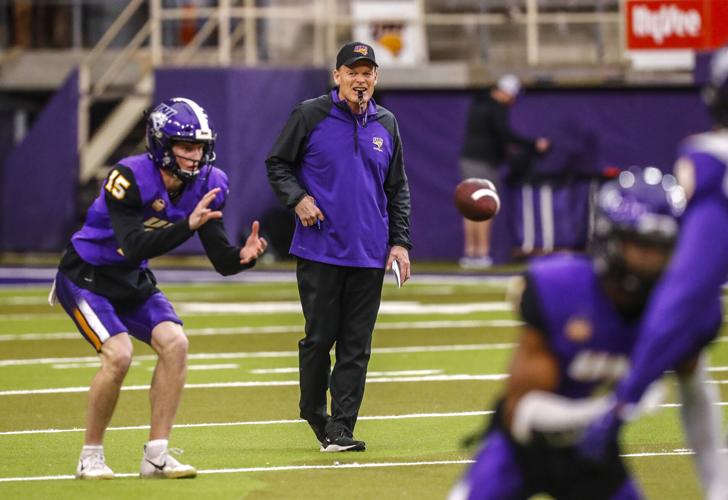 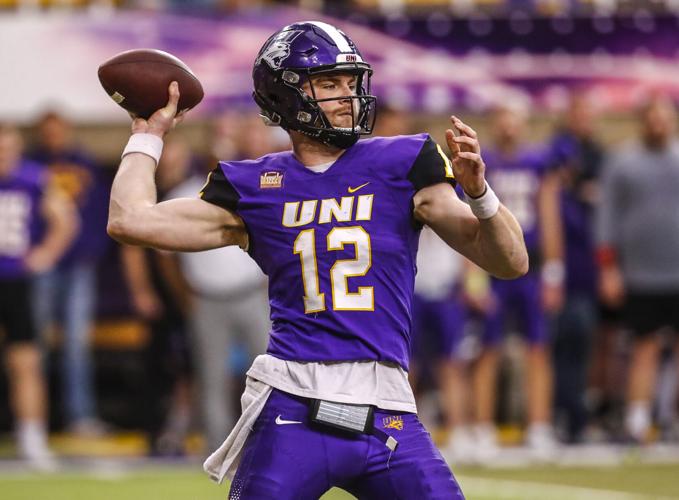 Northern Iowa's Theo Day prepares to make a throw during the Panthers' Spring game at the UNI-Dome on Saturday. 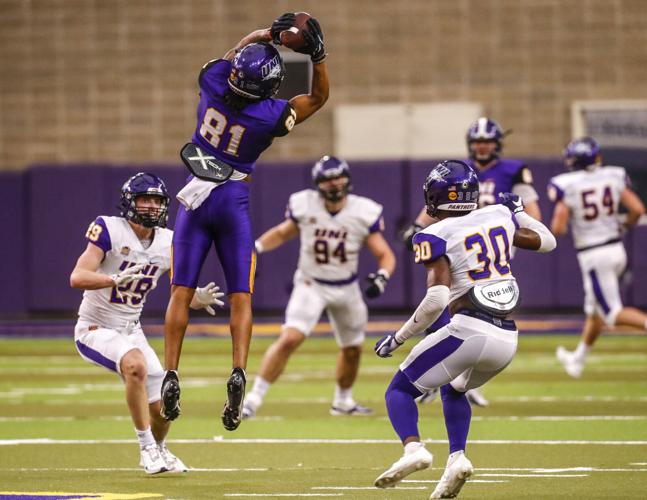 Northern Iowa's Desmond Hutson makes a catch during the Panthers' Spring game at the UNI-Dome on Saturday. 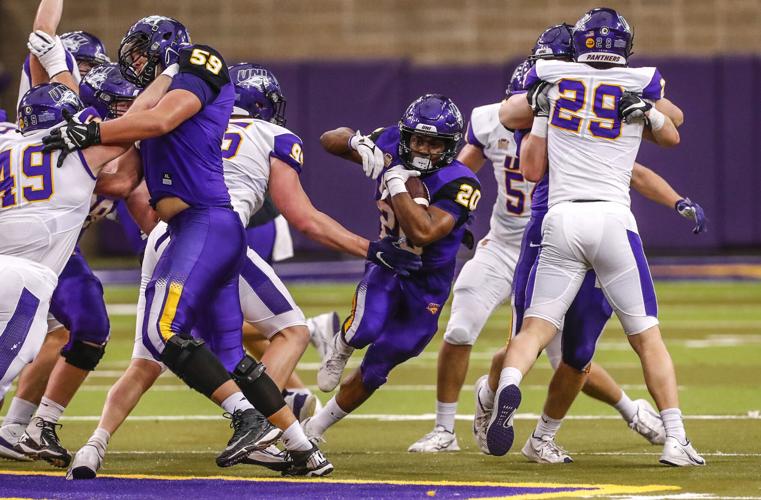 Northern Iowa's Vance McShane runs the ball during the Panthers' Spring game at the UNI-Dome on Saturday.

Spring is in the air. That means it’s time for cleaning, allergies and warmer weather.

The UNI Panthers held their annual spring football game Saturday morning at the UNI Dome. While there was no formal score or stat keeping, it was still an opportunity for fans to get a look at next years team. Head coach Mark Fraley noted that while the Panthers have looked good this spring, they should look even better come fall.

“I was pleased with spring ball,” he said. “I feel good that we created some depth in the spring by getting inexperienced guys experience. The competition will come in the fall because there’s lots of good players that have yet to play for us. They’re going to come in and compete for these jobs which will only make us better.”

Possibly the biggest topic entering the day was the apparent battle at quarterback. Theo Day became the full-time starter last season after transferring from Michigan State and was named MVC Newcomer of the Year. However, Fraley had mentioned previously that he was pleased with the spring performance of redshirt sophomore Matt Morrissey. Farley reiterated that while Day remains the starter, he’ll have to fight to keep the job.

“At this point leaving camp he is (the starter), but I tell you what, Matt’s really had a good camp,” Fraley said. “That’s why (the competition) will go into the fall...Theo is the starter leaving spring ball, but there’s going to be competition all the way through the fall. They’ll have to do a good job this summer and we’ll see where we end up in September.”

Day, for his part, said he’s felt comfortable this spring with where he’s at.

“I think the spring went pretty well considering we’re all learning a new offense,” he said. “I learned a new offense coming in last year and then had to do it all over again. I’ve been through four different spring practices now four different years so I’ve seen a decent amount. I feel like offensively we look pretty good.”

Of course, it was only natural that the Dome was buzzing about a certain former left tackle. Trevor Penning is widely projected to be taken in the first round of the NFL Draft this Thursday night. Fraley and many others were excited about Penning’s possible history making selection (more on that in Thursday’s paper). As far as the battle to replace Penning at the left tackle position, however, Fraley said the competition remains ongoing.

“We’ve got work to do there,” he said. “(Matthew) Vanderslice went in first today. (Trevor’s) brother Jared (Penning) played that role as well. Jared can be moved around. We’re still missing some guys like (Nick) Ellis to come back into the fold...We’ve got a chance to be good there, but we’ve got to get to fall ball to be ready.”

It’s not just the left tackle position. Wide receiver Isiah Weston is projected as a mid-to-late round draft pick in the NFL Draft while All-American defensive lineman Jared Brinkman is hoping to have his name called as well. Starting running back Bradrick Shaw will also hope to be taken, but his replacement options all looked strong on Saturday.

Dom Williams and Vance McShane were outstanding as both of them scored touchdowns, including a beautiful 48-yard catch and run from McShane. Reserves Amauri Pesek-Hickson and Ryan Ostrich also had solid outings while sophomore Terrance Kamara had the longest run of the day with a 46-yard carry.

“I feel good because we have depth there,” Fraley said. “I feel good with Dom as our starter. Dom was excellent. You saw what Vance can do and this was the first time I really got to see what Amari could do. That’s what stood out to me as far as our top two guys are what I’d hoped and what I’d expect. We got to find out a little bit more about the other two.”

There are still plenty of questions to be answered. There will be unofficial stats and more notes about the highs and lows of the practice in Monday’s paper. For now, though, the biggest thing was that for the first time since November, college football was in the air in Cedar Falls.

Penning is the first UNI Panther ever selected in the first round of the NFL Draft.

Northern Iowa's Theo Day prepares to make a throw during the Panthers' Spring game at the UNI-Dome on Saturday.

Northern Iowa's Desmond Hutson makes a catch during the Panthers' Spring game at the UNI-Dome on Saturday.

Northern Iowa's Vance McShane runs the ball during the Panthers' Spring game at the UNI-Dome on Saturday.