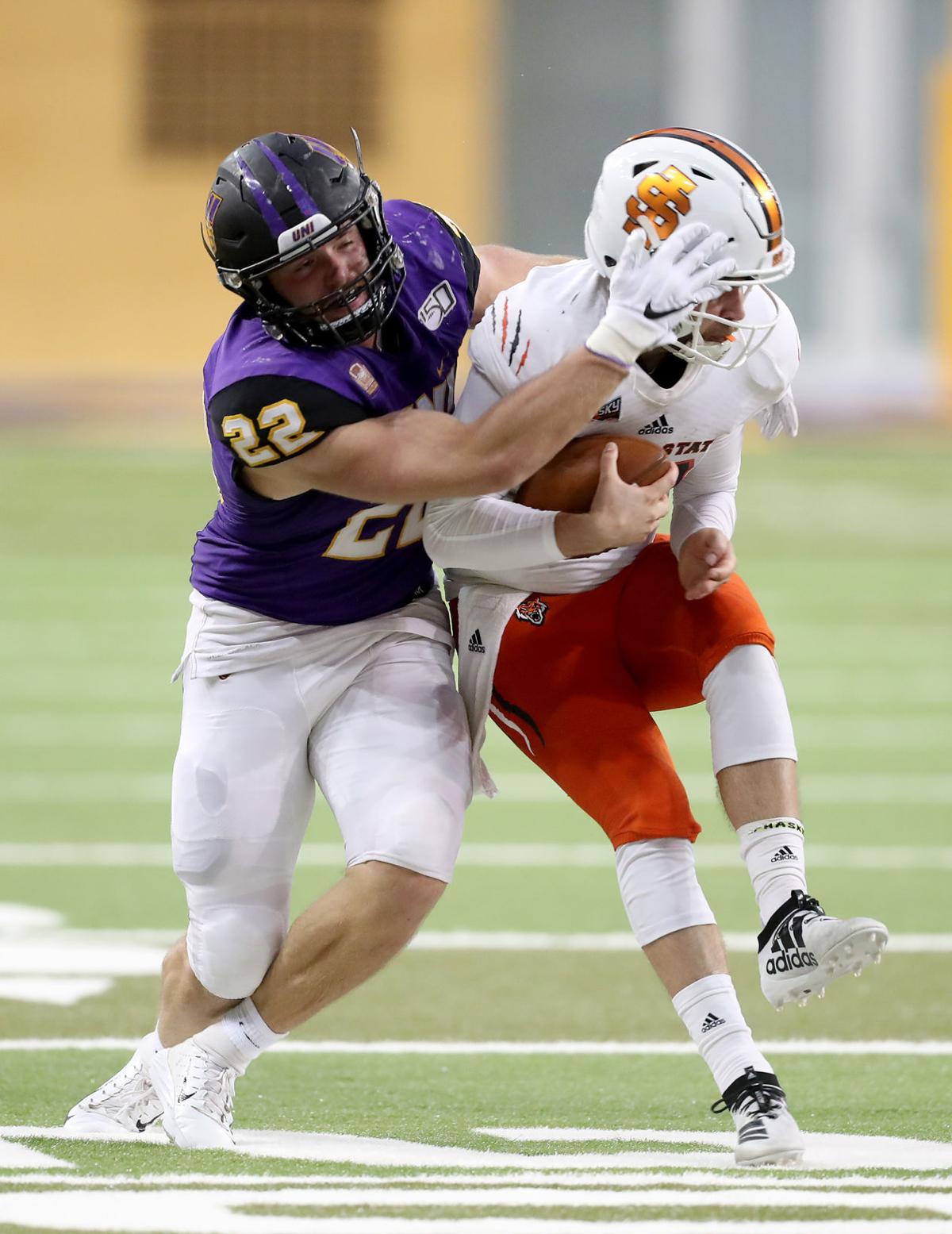 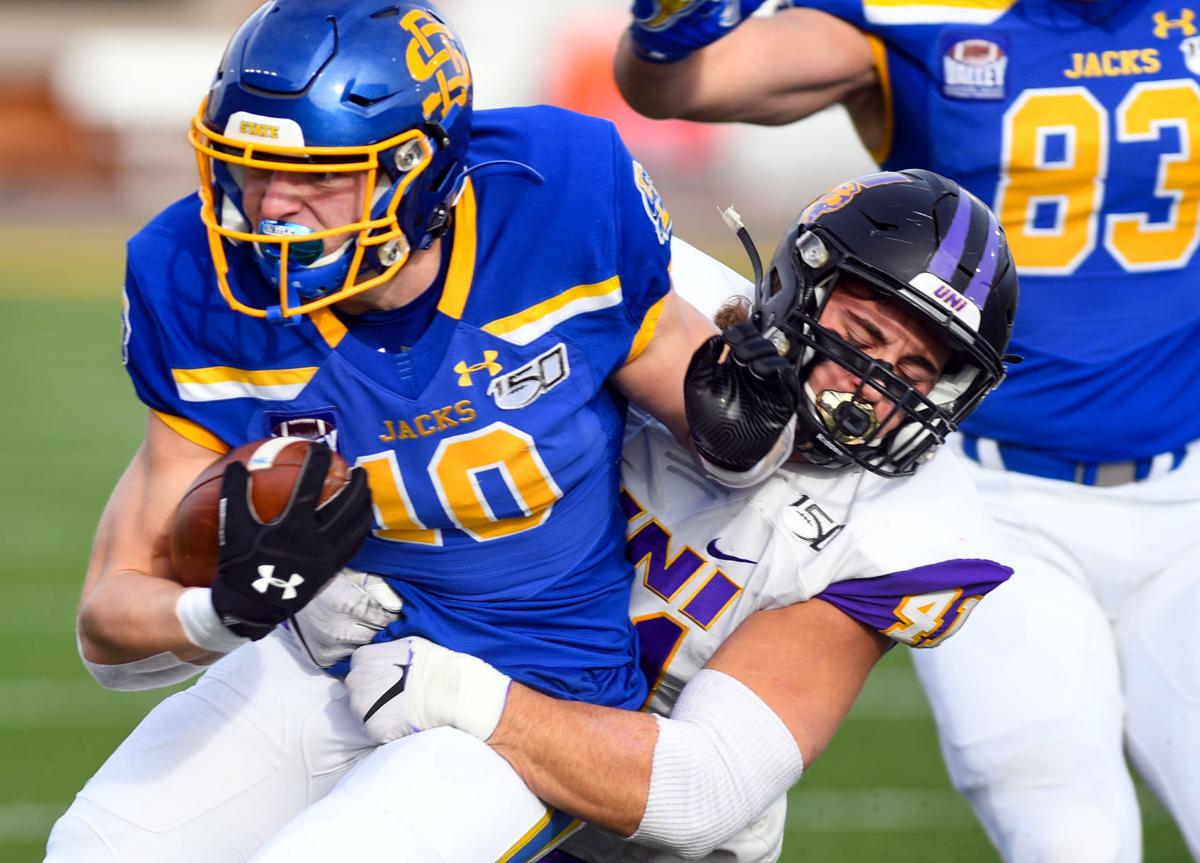 CEDAR FALLS – D.J. Vokolek looked right and then left late last July. In front of him were a lot of able bodies, big, fast and strong.

But what Vokolek, the University of Northern Iowa assistant head coach and linebacker coach, could not shake from his mind was his prospective group of linebackers, with a date against the Iowa State Cyclones a little more than a month away, was raw.

Yes, sophomore Bryce Flater was a standout on special teams who shined late in the 2018 season when pressed into duty at linebacker. Yes, Chris Kolarevic had made 60 plus tackles in six games before getting injured. Yes, junior college transfer Spencer Cuvelier was a terror at Iowa Central Community College in his only season at the Fort Dodge school.

“We didn’t have a lot of guys with playing experience and some new guys it was their first time playing,” Vokolek recalled.

Based on the numbers that group eventually produced as part of a FCS quarterfinal team and a defense that held nine different opponents to 14 or less points it might have been one of the best coaching jobs Vokolek has done.

Despite playing in just 10 games because of his lingering right foot injury, Kolarevic was a second-team all-Missouri Valley Conference pick. Cuvelier recorded 88 tackles, also in 10 games, including 21 in a quarterfinal loss to James Madison. Flater, the Grundy Center native, had perhaps the best season of them all recording 143 tackles, the sixth-best season total in program history.

All three of those players are juniors and will return for the 2020 season along with the likes of Alfonzo Lambert, Trevon Alexander and hybrid safety/linebacker Austin Evans.

And now, a year after having a little experience with his linebacker unit, Vokolek has a wealth of it.

“We got some guys with experience, guys who understand the defensive scheme and what we are doing,” Vokolek said. “It should be all review for them getting ready for next season. They have plenty of experience now and we are lucky because we have a few of them at that position, really a two deep with experience and that will help us moving into next season.”

In today’s college football and the many spread offenses the Panthers face, UNI has went with a smaller safety/hybrid linebacker in the form of D’Shawn Dexter three seasons ago and the likes of Evans and Trevon Alexander last fall.

“We will find a way,” Vokolek said of playing all three at the same time. “There are different things package wise with the people we played, based on offensive scheme, and adjustments we can make defensively with different sub packages. We have a lot of good defensive players and we want to put our best 11 on the field. Those three guys are part of our best 11 and we will find a way to get them on the field.”

Vokolek said Cuvelier, Flater and Kolarevic had great winters. Kolarevic had a second surgery on his injured foot that caused him to miss the quarterfinal loss and Vokolek said his rehab process went well and he looked good and fresh.

“They were ready to roll for spring,” Vokolek said. “I’m excited to get them back on the field because they are motivated. We watched the film and saw the things they did right and wrong. They are ready to capitalize on the things they learned and have a significantly better idea of our system and what we are doing and they will play much faster because of it.”

The Panthers also have a wealth of youth behind the top five factoring in the experience Lambert and Alexander received last season.

“He was on all of our special teams last year,” Vokolek said. “He is a high IQ guy football wise. I’m looking for him to step up and be a factor.”

A roundup of stories of spring UNI football.

Watson has been an offensive coordinator at Pittsburgh, Texas, Louisville, Nebraska and Colorado.

Among the players to sign with the University of Northern Iowa football team Wednesday was Cedar Falls quarterback Cael Loecher. 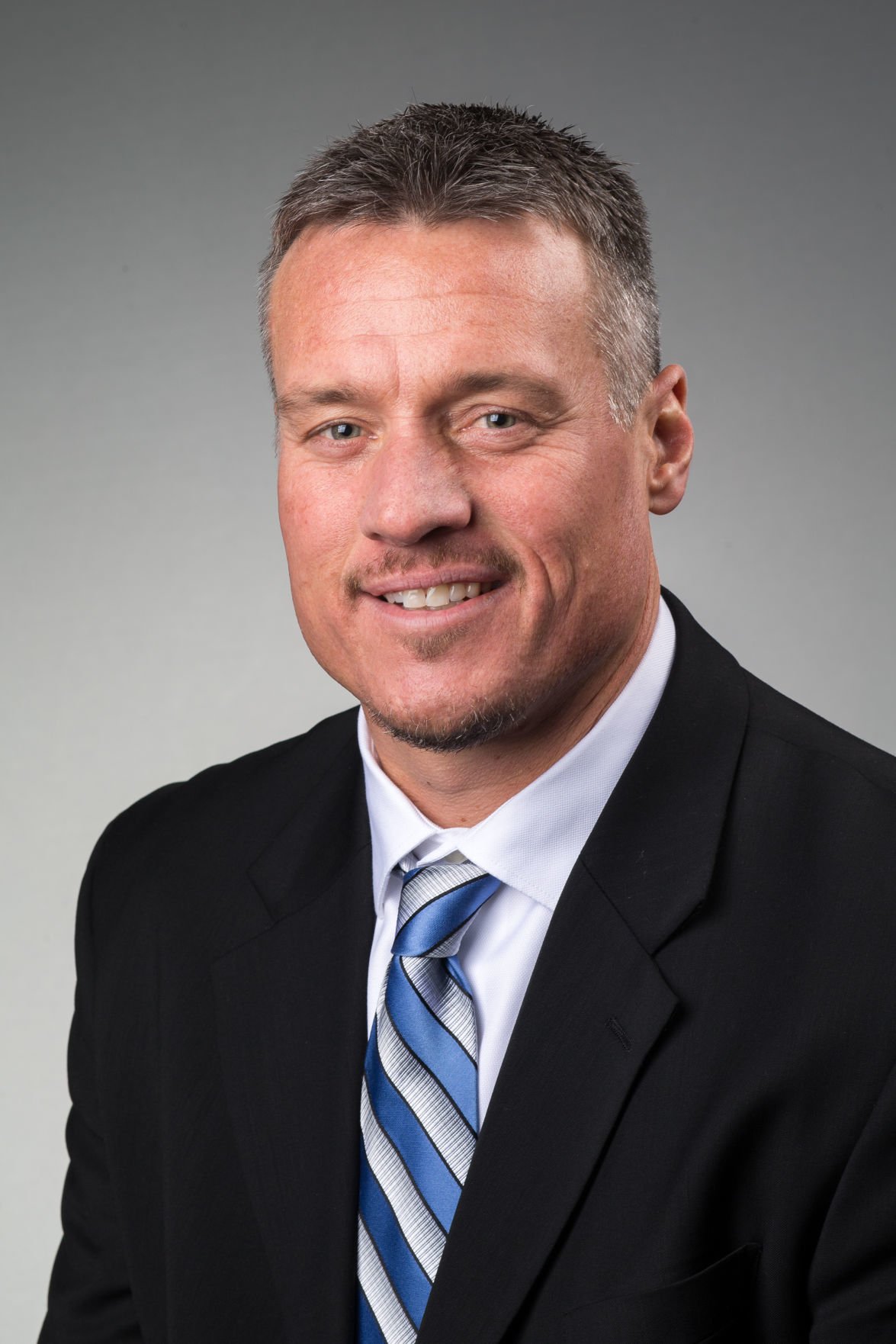