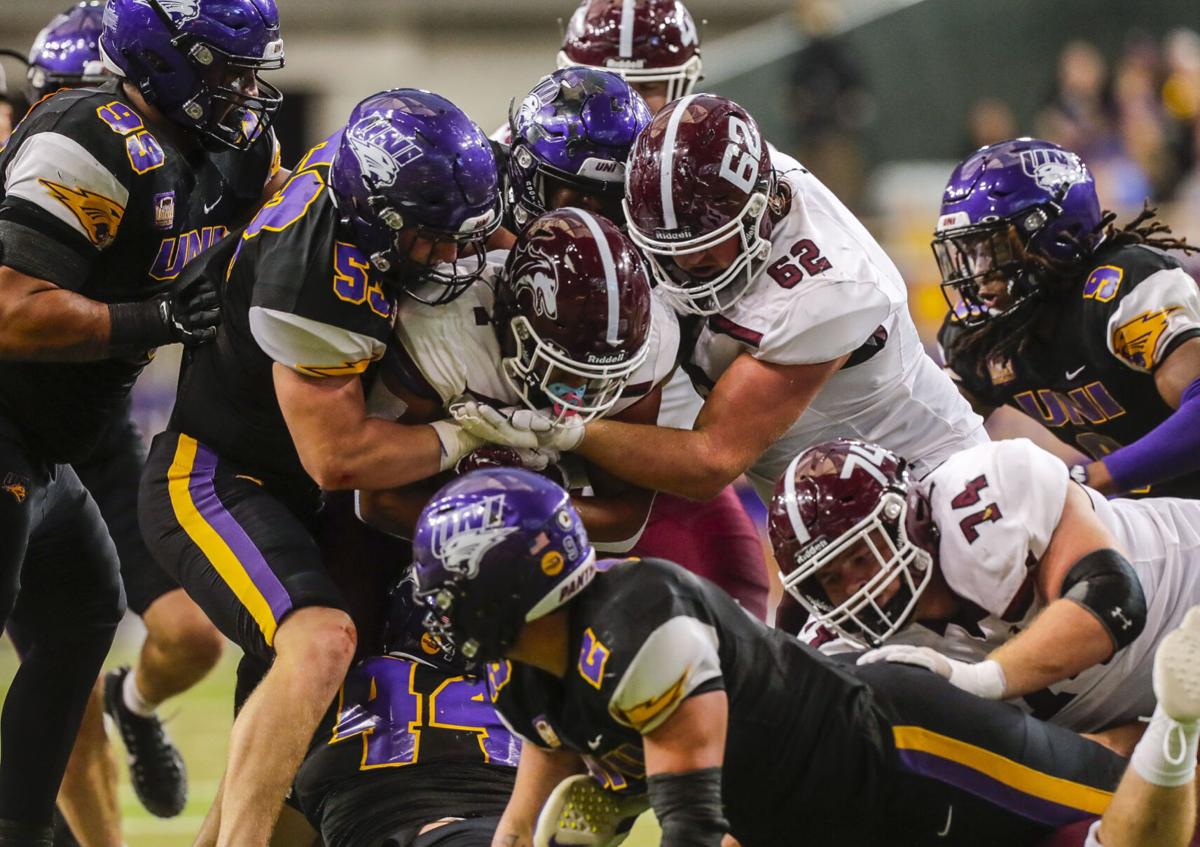 A gaggle of Northern Iowa defenders surround Southern Illinois' Romier Elliott during a run Saturday at the UNI-Dome. 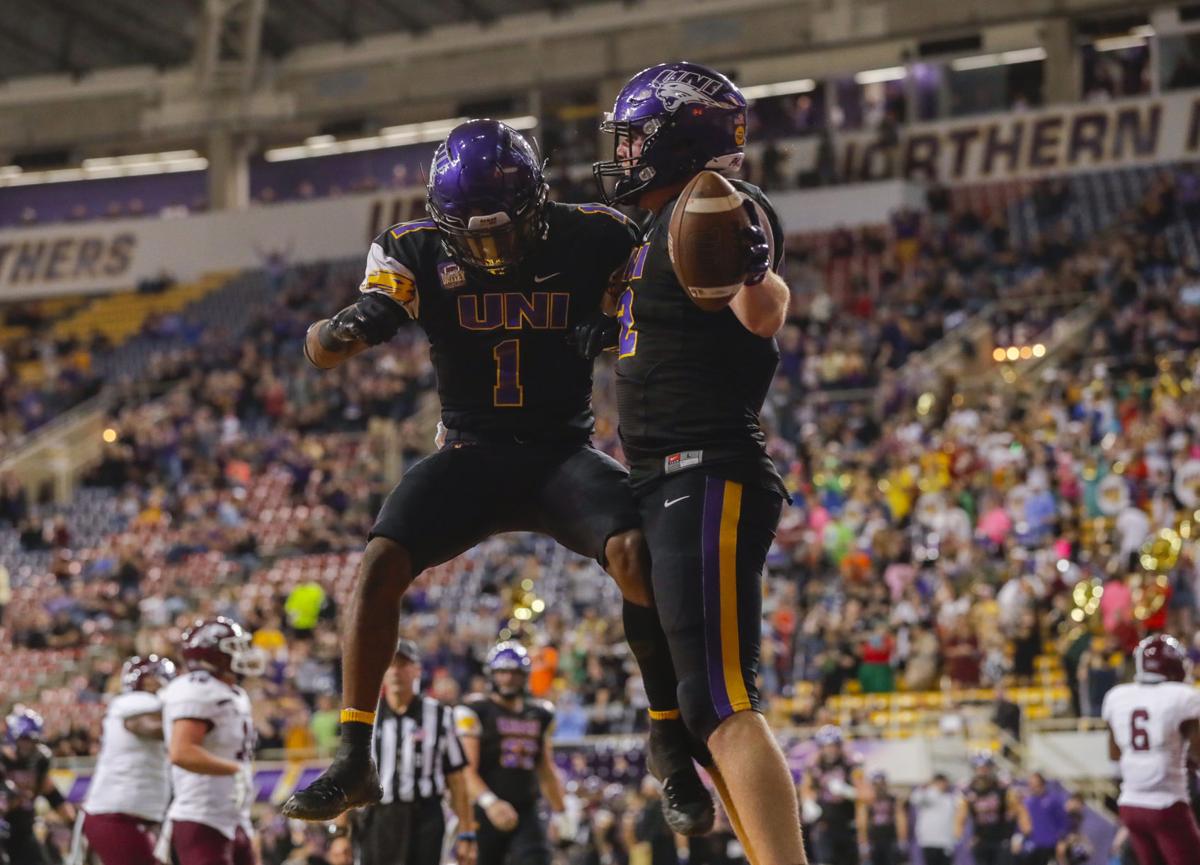 Northern Iowa's Kyle Fourtenbar and Deion McShane celebrate after Fourtenbar scores against Southern Illinois University on Saturday at the UNI-Dome in Cedar Falls. 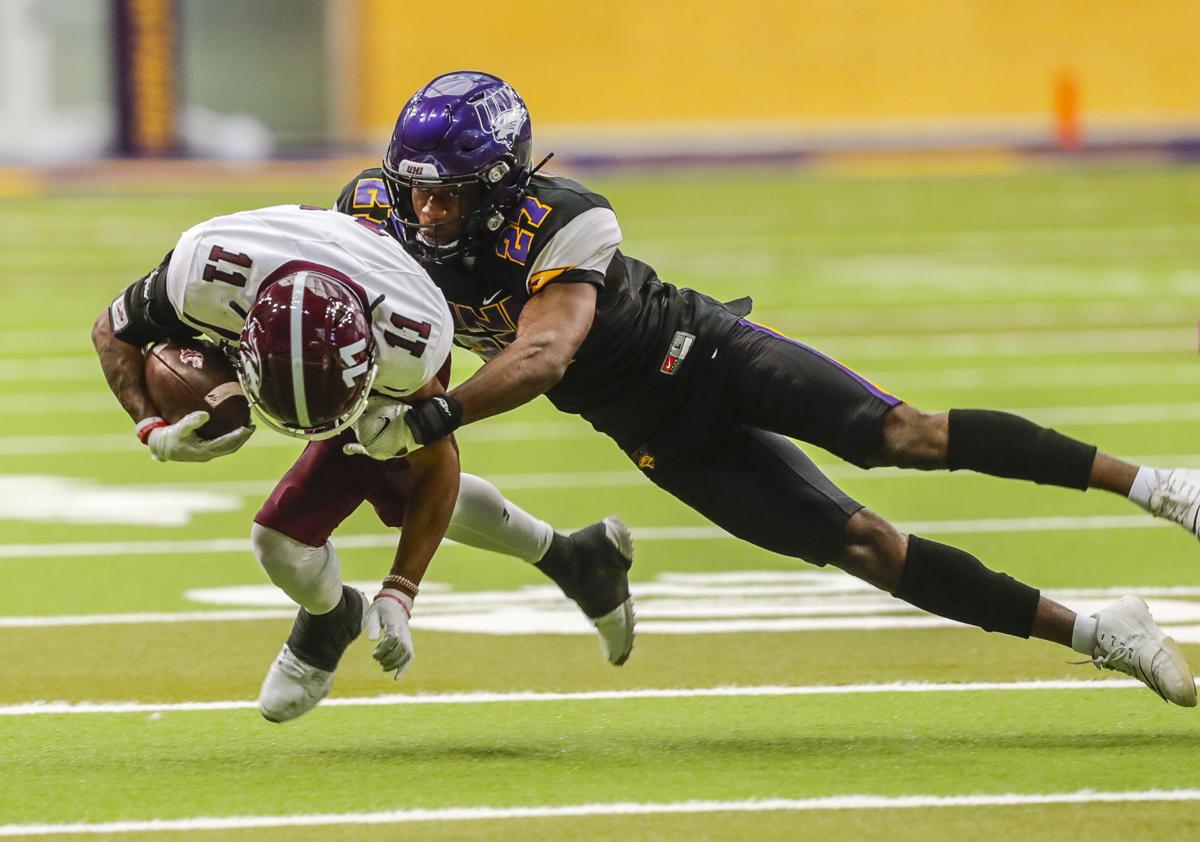 Northern Iowa's Austin Evans wraps around Southern Illinois University's Avante Cox as he runs the ball on Saturday at the UNI-Dome in Cedar Falls.

The longtime Northern Iowa head coach is shuffling through who to honor for senior night, which parents to call and figuring out who is available to suit up.

“Honestly, I can’t even keep track anymore,” Farley said. “I’m not trying to hide anything. As the week progresses, we’ll find that out.”

UNI has had a heart-wrenching past two weeks. It had two fourth quarter comebacks wasted against Illinois State in overtime two weeks ago and Missouri State last week.

The Panthers have a chance at redemption and a possible at-large playoff spot if they can stave off Western Illinois in a 1 p.m. kickoff at the UNI-Dome.

While recognizing the seniors is on Farley’s mind, a group that has had a tumultuous last year while playing two seasons in the span of nine months due to the COVID-19 pandemic, it is not the only thing he’s focusing on.

Still, he understands what it will mean to get that collection of players some deserved applause.

“It is a big thing,” Farley said. “They’re the ones who have battled the most. Send them out with some kind of common standard of what they came in with.”

A win would put UNI at 6-5, giving the Panthers a chance for a spot in the Football Championship subdivision (FCS) playoffs. There are other factors that would have to go their way to claim a berth.

What is left for the Panthers is to take care of business against a 2-8 Western Illinois team.

The Leathernecks have had two weeks to prepare for UNI in what will be Jared Elliot’s last game as their head coach. They are coming off a 42-21 loss to South Dakota in early November.

Behind quarterback Connor Sampson and receiver Dennis Houston, Western Illinois is averaging 26.5 points per game. The Leathernecks have been held below 20 points only three times.

“They’re putting up a ton of points on a ton of people,” Farley said. “That is what’s most concerning.”

Conversely, Western Illinois has allowed every opponent to hit the 30-point threshold.

UNI is banged up. It doesn’t know who will be the primary tight end among other players that either could play or be held out. Saturday will be game No. 18 over that nine-month period.

“We had so many guys get nicked up in the spring,” Farley said. “That has been the hardest part to be honest with you. Your game plan is dictated based off personnel on who you have.

“Right now, it is a no excuse business.”

UNI 76, North Dakota State 63: Behind a new season-high 27 points from point guard Karli Rucker, the Panthers rebounded with a convincing road win over the Bison.

Emerson Green chipped in 12 points and Kam Finley contributed 11. Grace Boffeli led the Panthers in rebounds with eight. They had higher shooting marks than the Bison and turned the ball over just six times compared to 19 from North Dakota St.

UNI had 42 points in the paint, 26 in the first half. It used a 9-0 run in the first stanza to break an 8-8 tie and never trailed the reminder of the night.

“I’m really pleased with the way our girls played tonight.” head coach Tanya Warren said. “Getting out to a quick start really made a difference for us in terms of both performance and confidence. The strength of our 3rd quarter helped us close out the game when North Dakota State tried to make a come back. Other than getting in some foul trouble, I thought it was a well-rounded (effort) from our team.”

Arkansas 93, UNI 80: The Panthers kept it close with the 16th-ranked Razorbacks up until the final 2 minutes, 42 seconds when the latter went on a 16-2 closing run to dispatch the former.

Two 3-pointers from Trae Berhow and AJ Green gave UNI the lead on two different occasions in the second half. Green’s trifecta was the last time it was out in front.

“We had ourselves in position,” head coach Ben Jacobson said. “We were in a great spot with a minute and a half. I liked how aggressive we were. We had a few mistakes, but I am proud of how we played.”

The size of Arkansas proved to be difficult as it outscored the Panthers 42-16 in points in the paint while also having an advantage in bench points, 40-20.

Berhow led UNI with a team-high 23 points and six rebounds. Green and Nate Heise finished with 16 points apiece while Tywhon Pickford and Cole Henry each dished out four assists.

"They're putting up a ton of points on a ton of people. That is what's most concerning."

A gaggle of Northern Iowa defenders surround Southern Illinois' Romier Elliott during a run Saturday at the UNI-Dome.

Northern Iowa's Kyle Fourtenbar and Deion McShane celebrate after Fourtenbar scores against Southern Illinois University on Saturday at the UNI-Dome in Cedar Falls.

Northern Iowa's Austin Evans wraps around Southern Illinois University's Avante Cox as he runs the ball on Saturday at the UNI-Dome in Cedar Falls.