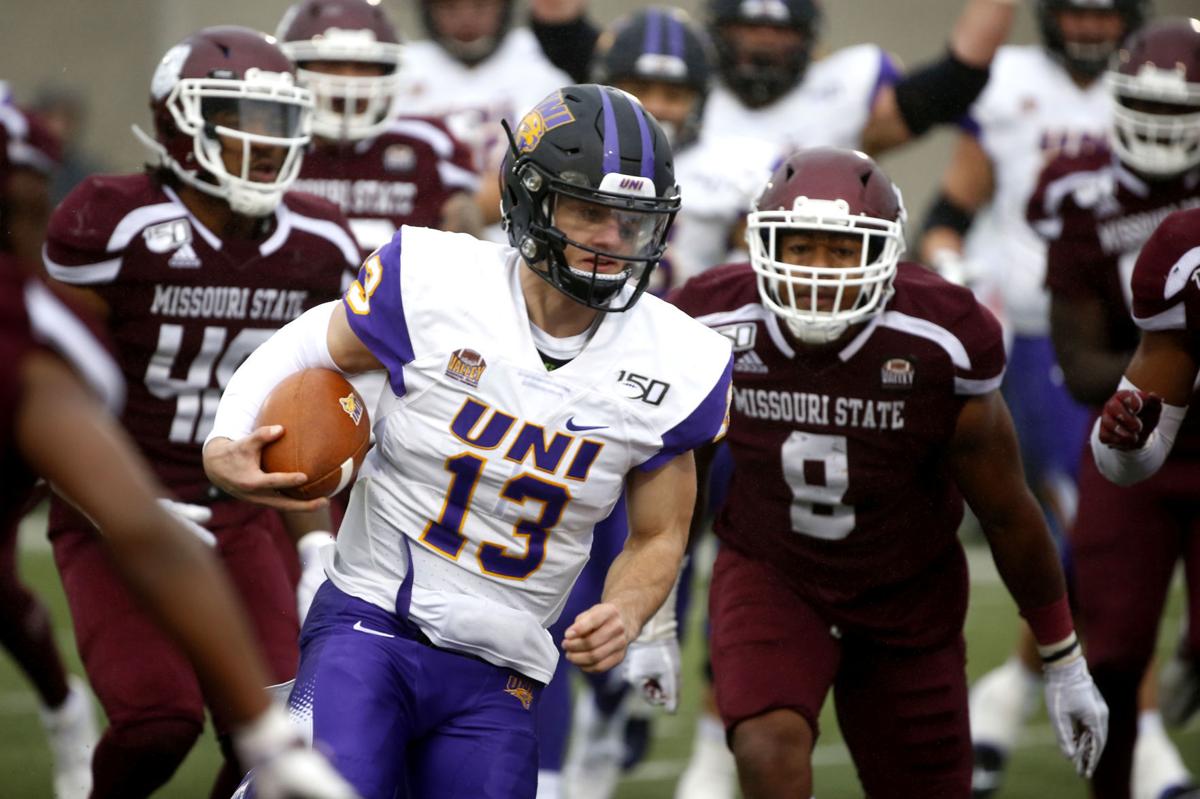 University of Northern Iowa quarterback Will McElvain runs for a touchdown during in a win at Missouri State last season. 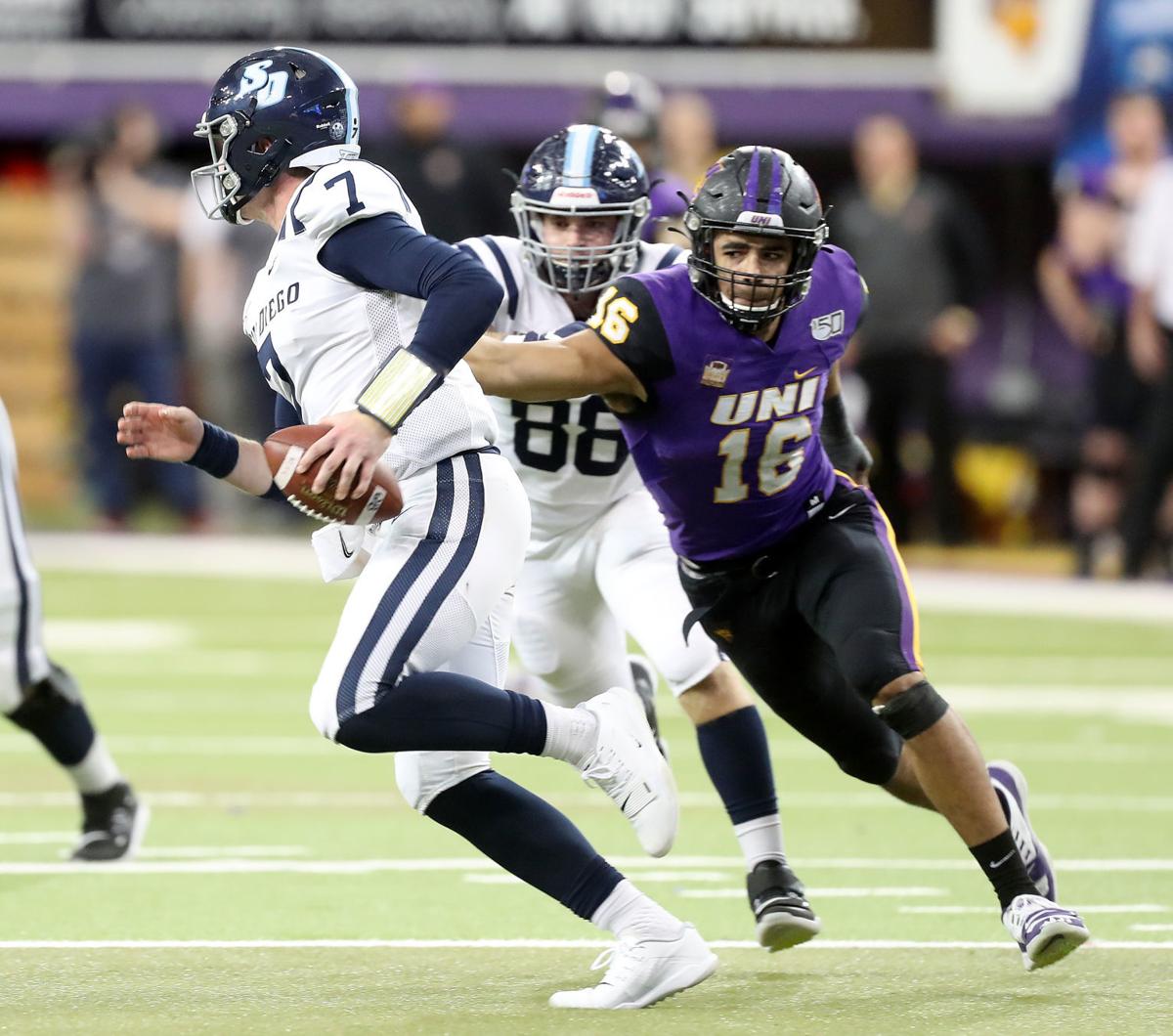 Northern Iowa's Isaiah Weston pulls down a pass ahead of Indiana State's Denzel Bonner during the Panthers' win over the Sycamores last season in the UNI-Dome. 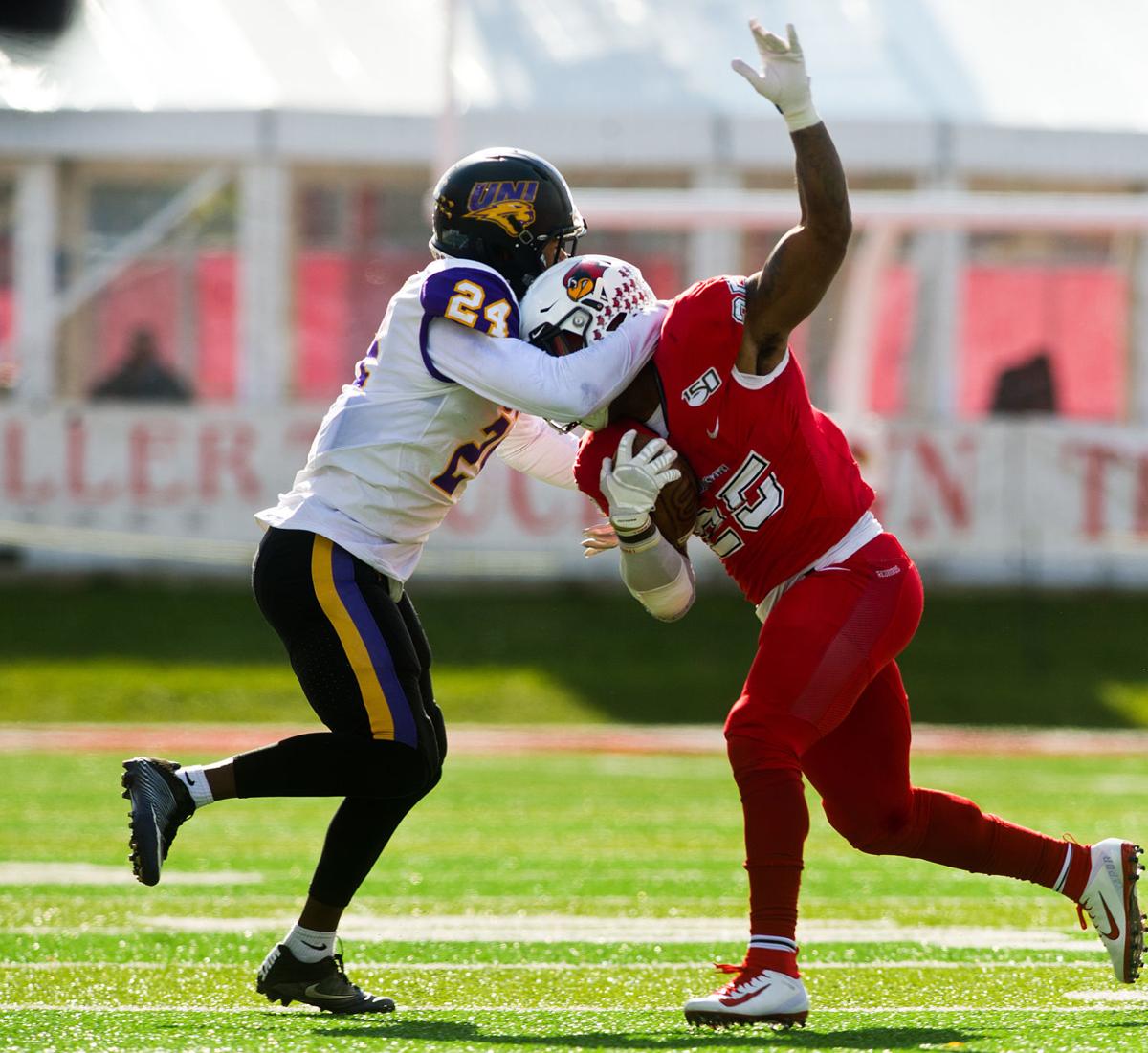 CEDAR FALLS – University of Northern Iowa football coach Mark Farley is not unlike any of his college football coaching brethren.

Farley would like nothing better than to be inside the UNI-Dome this week watching passes being thrown and hearing the sounds of pads popping and helmets colliding.

The Panthers, coming off a 10-5 season and a trip to the Football Championship Subdivision quarterfinals, would’ve had their first of 15 spring practices Wednesday, and Farley would’ve been in the middle of it, yelling instructions and teaching football in its most pure form.

But the footballs, helmets and pads are locked up in storage as the country fights to control the COVID-19 virus from spreading with social-distancing measures. One of those measures was shutting down UNI’s campus and halting all intercollegiate activities. It is a similar scene being played out across college campuses in the U.S.

And for a man that lives and breathes football, Farley is just fine with that decision.

“We are just a small piece of this thing, so we just want to support them and do what it takes to help our university remain strong and stay strong. Those things are most important to us.”

While Farley said he has heard of some programs talking about delaying spring practice, he does not anticipate UNI conducting one.

“To be honest, no,” Farley said of a scenario of UNI still holding spring practice.

Farley and his staff have been working from home recruiting and preparing their student-athletes to finish the 2019-20 school year through online courses.

“That is our first real challenge we have, is helping them find a way to be productive and excel with the online courses,” Farley said. “Not just taking them, but to excel and do a great job with them.”

A second challenge from a football standpoint is providing guidance on how his athletes may continue to build on what Farley said was a tremendous winter off-season in the weight room.

“We’ve got to find a way to be creative for them to do things individually from home,” Farley said. “How do we do the weight room? How are we going to do things they need to do to train because we can’t be in contact with each other. We can’t be on campus as a group.

“It is one thing to be working out with somebody else pushing you, challenging you. It takes a whole another mindset to train on your own. That discipline is what we are going to have to teach remotely and grow remotely so if we do get a chance to play football our student-athletes are ready to play.

“It is a huge challenge and we just have to attack it from a different angle.”

In addition to his excitement on the gains his team made during winter training, Farley is more than optimistic of the potential the 2020 team has. It will be a veteran squad with 41 players being either juniors or seniors.

That group has another returner, 2019 leading tackler, Bryce Flater, who recorded 143 tackles.

“I think what I noticed is we have really good leadership because we got more of a red-shirt junior/senior football team whereas we were more of a sophomore-junior team last season,” Farley said. “I saw that leadership and guys taking more invested roles as far as taking the lead, taking the program over.

“I felt really good about that and what we developed through the winter.”

The Senators played the Sharks in San Jose on March 7, the Ducks in Anaheim on March 10, and the Kings at Staples Center on March 11.

A near 14-year fixture of sports talk radio in the Cedar Valley ends Friday.

University of Northern Iowa quarterback Will McElvain runs for a touchdown during in a win at Missouri State last season.

Northern Iowa's Isaiah Weston pulls down a pass ahead of Indiana State's Denzel Bonner during the Panthers' win over the Sycamores last season in the UNI-Dome.