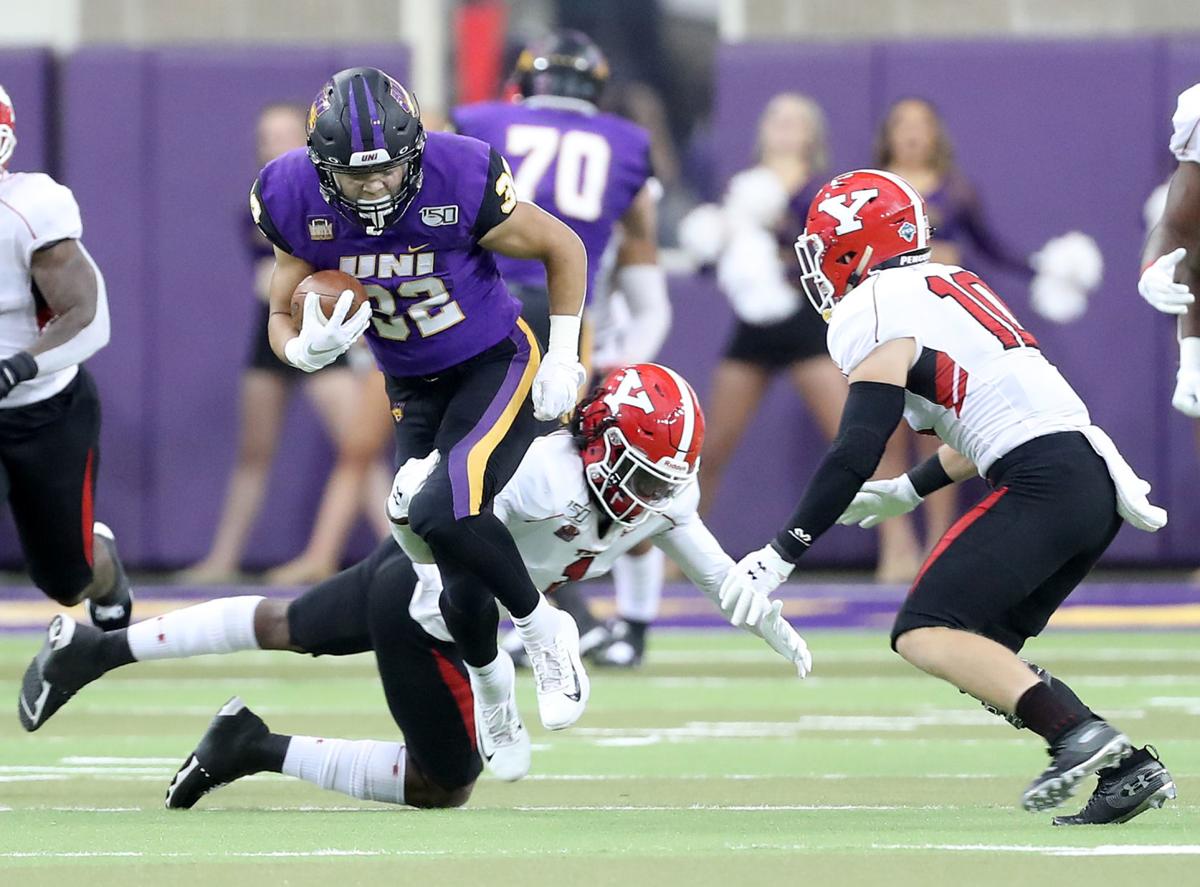 UNI's Tyler Hoosman is tripped up by Youngstown State's Zaire Jones, left, and Kyle Hegedus Oct. 5 in the UNI-Dome.

Entering the 2019 season, Farley’s Panthers were set at running back with senior Trevor Allen and sophomores Tyler Hoosman and Alphonso Soko manning the top three spots on the depth chart.

College football: UNI in a good place after win over Redbirds

Three weeks ago, Soko suffered a ruptured Achilles against North Dakota State. Then in a span of four plays in the third quarter of the Panthers’ 27-10 win over Illinois State Saturday, both Hoosman (ankle) and Allen (concussion) went down.

That left true freshman Nick McCabe to handle the bulk of the running duties and he answered the call with 15 carries for 44 yards.

“He was a big factor in the game, finalized that football game,” Farley said.

Monday at his weekly press conference, Farley gave a synopsis of his contingency plan at running back if neither Hoosman nor Allen can return to play this Saturday against Indiana State.

“I don’t have a great answer for you right now,” Farley said. “I would hope we’d get one of the two back. I will have a better handle on it on Tuesday. There is a lot that has to happen on Monday and Tuesday before they can run again.”

Hoosman had his ankle re-taped after he twisted it and was jogging on the sidelines after he was injured. Allen was hit hard, needed assistance to get off the field and went immediately to the locker room. Later in the fourth quarter, Allen was walking the sidelines in uniform, but without his helmet.

UNI has options at the position.

Farley said one of those possibilities is tapping into the freshman class.

Redshirt freshman Sam Schnee rushed for 1,432 yards as a senior at Dubuque Senior. He played the position last year, but has been at wide receiver all this season and has made every road trip with the Panthers.

True freshman Kendall Robinson of Waterloo East and 6-foot, 241-pound Cameron Baker of Council Bluffs Thomas Jefferson both played running back in high school, too. After opening the year at receiver, Robinson has worked with the running back group the past two weeks, while Baker has been working at linebacker.

Then there is linebacker Trevon Alexander, who made the switch from running back to linebacker in the spring. Alexander scored 35 touchdowns as a senior at Richmond (Mo.) High School while playing quarterback, running back and wide receiver. He started at linebacker against Iowa State and Southern Utah and has been a key reserve.

“Trevon ... it is a little harder transition for him,” Farley said. “He is playing very well on defense.”

Among the biggest issues with inserting a freshman into the lineup or moving a player from a different position to running back is that player’s ability to pick up protection reads and schemes in UNI’s pass game rather than learning the actual run plays.

UPDATE: No. 9 UNI makes a statement

“Protection is probably the tougher thing of the two because you just don’t walk in there and try to protect against some of these defensive lines that are coming down on us,” Farley said. “We have our work cut out on that one. I wasn’t prepared for that one. I thought we had enough running backs going into the season.”

While Farley is hopeful he will get Hoosman or Allen back for the Sycamores, he said the 6-foot, 215-pound McCabe, who rushed for 1,384 yards and 22 touchdowns as a senior at Caledonia, Minn., last year, is more than capable.

McCabe, who originally committed to Minnesota and reported there in the summer before leaving and coming to UNI, scored the Panthers’ first rushing touchdown of the season against Southern Utah. He has carried the ball 24 times for 62 yards.

In UNI’s most recent games, he has been a special teams regular.

“He played early and then I was actually contemplating redshirting him and I’m glad we didn’t now,” Farley said. “The more reps he gets the more productive he will be. He just needs time to get those reps in practice that maybe he wasn’t getting and start to get into game form as a running back.

“The great thing about him is he is very tough and he handles that phase of the game, protection. We will just have to see what we can use him in more and what he can handle. I would think we could do everything with him that we were doing with the other two.”

BROWN HONORED: Freshman cornerback Omar Brown was named the National FCS Freshman of the Week after notching two interceptions and five tackles, including one for a loss, against Illinois State.

Julian Good-Jones has had plenty of ups and downs, but he's become a key leader for Iowa State's football team.

College football: Brown has made impact on No. 5 UNI's defense

UNI freshman defensive back Omar Brown has been a key component in the success of the Panthers' defense.

NFL notes: Maybe Sean McVay made it all look just too easy.

Maybe Sean McVay made it all look just too easy.

College football: No. 5 Panthers look to keep foot on the gas

No. 5 UNI looks to keep foot on the gas as it hosts Indiana State this Saturday at the UNI-Dome.

Northern Iowa’s Jordyn Rolli has been named to the Missouri Valley Conference’s second team all-conference for the 2019 season, along with Lizzie Mewes being selected to the all-Freshman team.

UNI's Tyler Hoosman is tripped up by Youngstown State's Zaire Jones, left, and Kyle Hegedus Oct. 5 in the UNI-Dome.