With only 17 points in a season-opening loss to Air Force on Saturday, the first look at the Panthers’ new offense did not tell the full story.

“It is not the result that we want in terms of winning or losing,” Reeder said. “But, our guys competed. We moved the ball. We just need to finish drives and not shoot ourselves in the foot.”

Clanton highlighted the positives in UNI’s loss while pointing out they still did not accomplish their job against the Falcons.

The players shared the coaches’ dissatisfaction after failing to record a touchdown until midway through the fourth quarter, he said.

“They are frustrated with themselves as a whole offense,” Clanton said.

Reeder noted many of the Panthers’ mistakes had little to do with their opposition.

“It is efficiency,” Reeder said. “We can spend all this time worrying about scout cards and scout team, but it does not matter. It is about what we do, and that is what showed up on Saturday. We did not even need a defense out there to make those mistakes.”

Both coaches thought the Panthers need to improve their ground game.

With only 119 yards on 24 attempts, UNI struggled to establish the run until the game was well within Air Force’s grasp.

Reeder wants to use the run game to set up the play action, but noted ‘‘you have to call plays for the way the game is going” in response to the Panthers falling behind early.

Clanton, the Panthers offensive line coach in addition to his co-offensive coordinator duties, said he knows the offensive line can do more for its running backs, regardless of the situation.

“Those guys can run block better,” Clanton said. “We have to learn and grow from the experience. They know the standard that has been set. We have had multiple NFL offensive lineman since I got here. You have an older group of guys that knows what they need to do, and I think it will motivate them for the next game.”

Senior Nick Ellis, one of UNI’s starting tackles, said the offensive line did not play to its best ability despite allowing no sacks on Saturday.

“That is our standard. You do not want to have any sacks, any pressures,” Ellis said. “In the run game, we had less than 120 rush yards. That is not our standard. We need to have closer to 150-200 yards for us to win. We did not do our thing to win.”

The passing game featured was one area that shined for the Panthers in the loss.

Quarterback Theo Day completed 20 of 32 pass attempts for 286 yards and two scores with one interception. Eight Panthers recorded receptions. Senior wide receiver Deion McShane led UNI with 6 receptions for 106 yards and was on the receiving end of the longest play of the game — a 40-yard pitch and catch in the fourth quarter.

“Theo was accurate,” Reeder said. “No sacks, the ball was out on time, the wide receivers made plays. … I was pleased with the way we threw the football.”

The Panthers get their first chance to rebound on the road against the North Dakota Fighting Hawks at 3 p.m. Saturday.

Last week, UND played at Nebraska and played the Huskers tough for three quarters before losing 38-17.

The Hawks finished last season with a 5-6 record, but the record does not tell the story of the 2021 North Dakota football team.

With all five conference losses coming by a combined 23 points, the Fighting Hawks finished the season 3-5 in the Missouri Valley Football Conference, but with a plus-11 point differential.

Returning offensive starters include quarterback Tommy Schuster, who completed 65% of his passes in 2021 for 2,493 yards and 13 touchdowns with seven interceptions. Schuster’s 65% completion percentage led the MVFC. Schuster continued his efficient play last week with 24 completions on 37 attempts for 131 yards and one touchdown.

On the offensive line, UND returns left tackle Donny Ventrelli and left guard Easton Kilty from a unit that allowed only eight sacks last season. Despite their youth on the right side, the Hawks only allowed two sacks in their loss to Nebraska in week one.

Defensively, UND fields a group of players with little starting experience. But the Hawks defense held Nebraska to only seven points in the first half. Locking down the middle of the field, All-MVFC honorable mention linebacker Devon Krzanowski, UND’s leading tackler in 2021, is the most experienced player with 18 career starts.

Everything you need to know about Northern Iowa Panther football

Everything the Waterloo-Cedar Falls Courier has produced on Northern Iowa football this fall. 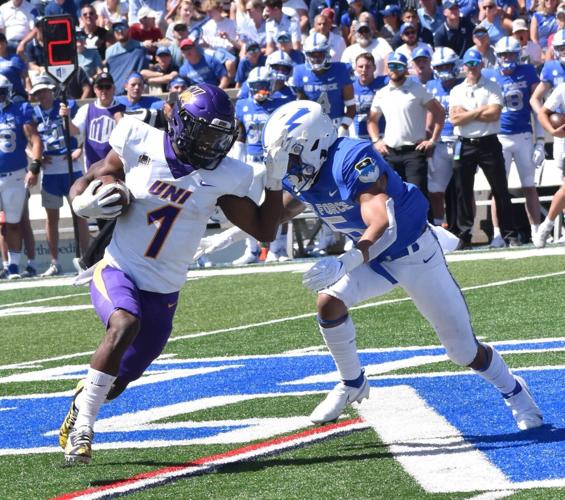 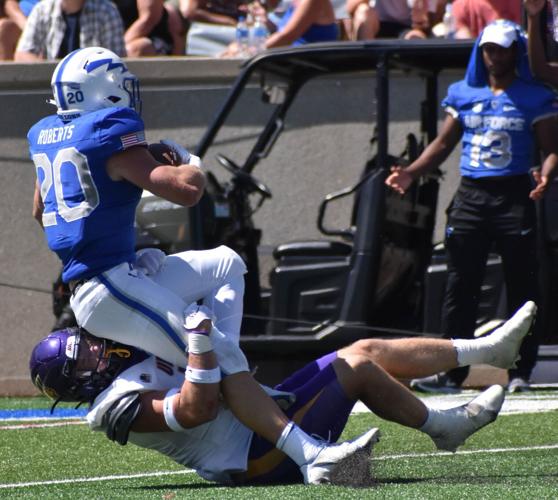