Northern Iowa offensive tackle Spencer Brown was so happy to hear his name called Friday during the NFL draft that he leaped from a chair and destroyed a table.

The Lenox native was selected in the third round, 93rd overall, by the Buffalo Bills on day two of the draft.

“It was the longest day of my life,” Brown said. “I just sat there and tried to stay positive as I could and it came through. I had been waiting for a long time to hear that call and I was happy to hear it.”

Brown was so happy to get that phone call, he immediately had to pay tribute to the Bills Mafia by crushing his mom’s folding camping table by leaping on to it from a chair, mimicking a tradition dating back to 2004 where Bills fans started leaping and destroying tables when their team needed to run the table to make the playoffs.

“I was running on a high with a lot of adrenaline and the table was set up,” Brown said. “All my buddies said, ‘You got to do it. You got to do it!’ And I had to do it for the Bills Mafia, Bills Nation.”

The 6-foot-8 1/2, 311-pound Brown opted out of 2020-21 season to train for the draft. He spent the bulk of that time in California training with former NFL all-pro tackle Joe Staley, in particular leading up the Senior Bowl. He is the sixth UNI Panther to be selected in the third round or higher in program history.

Brown said Buffalo offensive line coach Bobby Johnson attended UNI’s pro day in March and from that point on he and Johnson had stayed in contact.

“The coaches at Buffalo have been great,” Brown said. “I’m happy to be part of the Buffalo Bills organization and part of the Bills Mafia. I’m anxious to get out there and get started. It was definitely a place I wanted to end up. Super grateful and happy and lucky.”

Brown will join Cedar Falls native Ike Boettger in the Bills’ offensive line room. Boettger was re-signed by Buffalo to a one-year deal earlier this week.

“We have mutual friends. We got in contact back in the fall and have talked back and forth. He messaged me right after I got picked to congratulate me,” Brown said. “It is pretty neat I get to go play with a guy I know.”

From a small town with a population less than 1,500, Brown was under recruited but UNI head football coach Mark Farley saw something in the then 220-pound tight end.

Like teammate Elerson Smith, who was drafted Saturday, Brown bought into UNI’s strength and conditioning program and built himself into a NFL offensive tackle.

Brown made his first start in 2017 at Iowa State as a redshirt freshmen when he still hadn’t completely filled in his frame.

“I think Elerson and I have unique story,” Brown said in March after UNI’s pro day at the UNI-Dome. “If you flash back to 2016 when he and I walked in the door on day one. We were both skinny and undersized. We were both under recruited.

“So he and I both have the same story in that sense. We came in worked hard, bought into the program and didn’t care what was said about us in our past, just wanted to look to the future.”

Brown played in 33 career games with the Panthers, 32 starts and was second team all-Missouri Valley Football Conference following the 2019 season.

After he was selected to participate in the Senior Bowl, UNI head coach Mark Farley said this about Brown, “Spencer … here is a 8-man football guy from Lenox, Iowa, who is now going to be playing in the Senior Bowl with the best players in the country. It was a five-year development. He was all-in from the start on what we could get him to do. He bought in and is an example of the growth of what you come in as and what you leave as if you buy-in.

“It takes a village of people to take a player from 8-man football all the way to the Senior Bowl, but we’ve done it multiple times and I’m proud of our guys.”

When he puts on his Bills’ jersey for the first time, Brown won’t be the first Panther to have done so. Current UNI defensive line coach Bryce Paup was the 1995 NFL Defensive Player of the Year for the Bills. 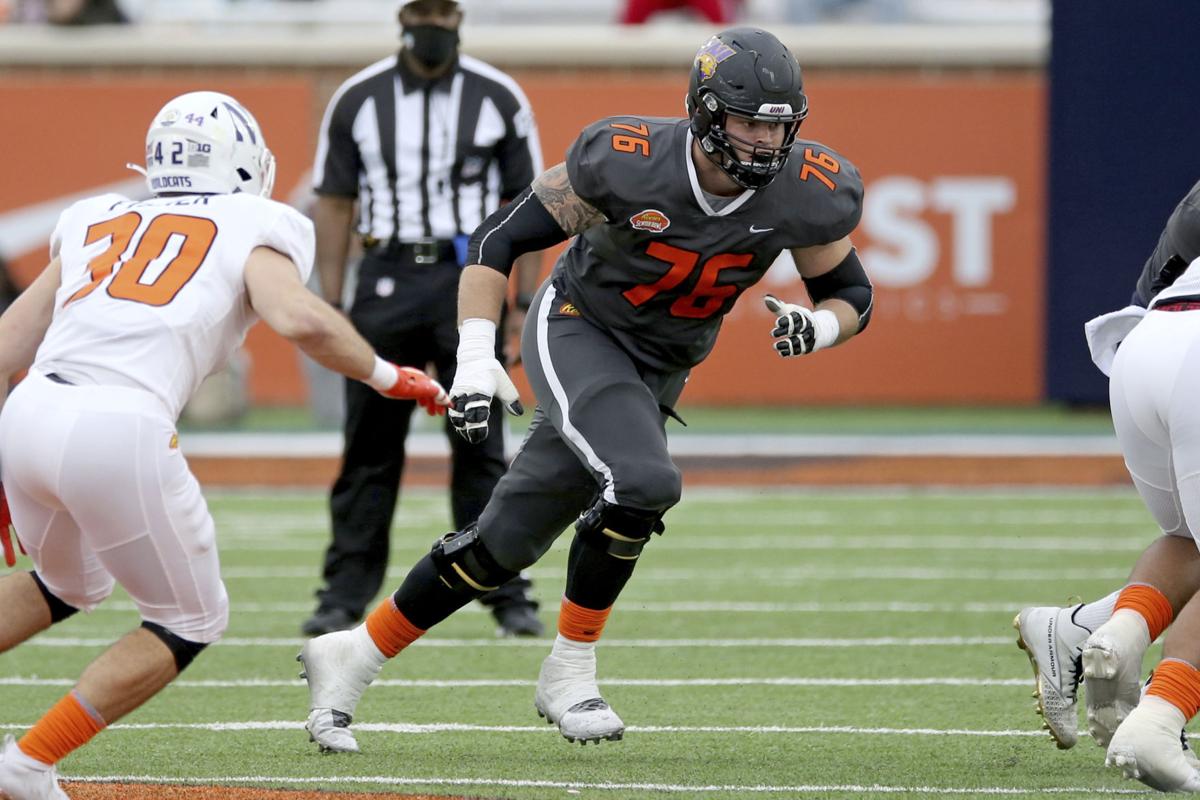 Offensive lineman Spencer Brown of Northern Iowa (76) blocks during the second half of the Senior Bowl in Mobile, Ala. Brown was selected by the Buffalo Bills in the third round of the NFL draft on Friday. 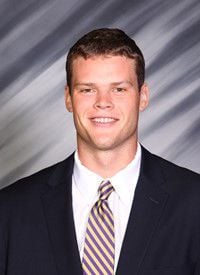