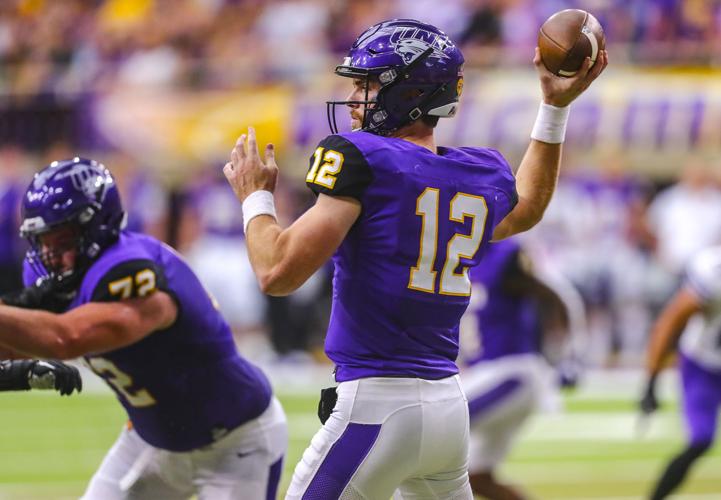 Northern Iowa quarterback Theo Day makes a pass against St. Thomas during the Panthers' home opener at the UNI-Dome. 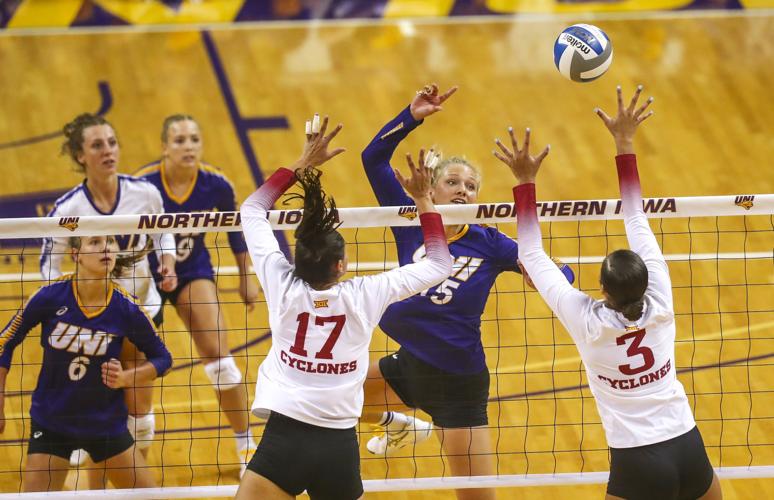 University of Northern Iowa's Carly Spies hits the ball against Iowa State University on during the Panthers' home opener at McLeod Center in Cedar Falls.

The head coach of Northern Iowa’s football team watched a banged up version of his group battle back from a 14-point fourth quarter deficit only for the chance at victory to be snatched away.

Missouri State quarterback Jason Shelley fired a deep ball to Naveon Mitchell, who weaved his way through the Panthers secondary for a 55-yard game-winning touchdown to push the Bears past UNI 34-27 in Springfield.

“This one is heartbreaking because they battled back,” Farley said. “We had a chance to win that game and I don’t know what else to say, but yeah, it stings.”

Behind a pair of fourth quarter touchdown connections from Theo Day to Deion McShane, the Panthers (5-5, 3-4 MVFC) gave themselves a chance. Day overcame two interceptions in the first half to turn his day around.

On 4th and 15, Day moved to his left and found McShane on the back end of the end zone for the game-tying touchdown. McShane finished with six catches for 86 yards while Day threw for 238 yards and completed 56.7 percent of his throws.

“He kept is poise,” Farley said. “That was a great catch, it was a pinpoint throw. He’s a competitor.”

It was a battle of field goals for the first 25 minutes until Missouri State’s Tobias Little plunged forward for a 1-yard score to give it a 13-6 lead at the break.

After the Bears scored on their first drive of the third quarter, UNI answered with a 2-yard rushing TD from Tyler Hoosman with 6 minutes, 10 seconds left in the third.

The Panthers finished 2-for-11 on third downs despite having more first downs and doubling up Missouri State on rushing yards. Yet the speed of the Bears skill players were tricky for UNI’s defense.

“They’re really good,” Farley. “The run game is good enough and their quarterback’s ability to run.”

UNI will close its regular season with senior night next Saturday against Western Illinois at 1 p.m.

Indiana State 3, Northern Iowa 2: Nearly a month ago, the Panthers were able to defeat the Sycamores in a five-set thriller at home. The latter returned the favor.

Carly Spies led the Panthers with 17 kills while Kaylissa Arndorfer chipped in 16. Emily Holthaus and Kira Fallert each had 12 with Tayler Alden and Jenna Brandt each dishing out 25-plus assists.

Six Panthers had double digit digs, led by 19 from Payton Ahrenstorff. They went on a 4-0 spurt to seize the lead in the second set and then had back-to-back kills from Spies plus an attacking error to send the match to a fifth set.

The Sycamores scored the final six points to claim the opener, used an 8-0 flurry to nab control of the third set and finished the night with an ace from Taylor Shelton to finish off the victory.

Vermont 71, Northern Iowa 57: The Catamounts led wire-to-wire on Thursday that sent the Panthers reeling now facing an 0-2 hole on the young season.

The largest lead Vermont got in the first half was nine points and despite each small UNI runner that trimmed the deficit down to a possession, it never grabbed hold of a lead.

A 14-2 run in the second half ballooned the Catamounts lead to 15 and the Panthers couldn’t get the margin below 10 points the remainder of the way.

AJ Green rebounded from his 1-of-14 shooting night in the season opener to lead the Panthers with 19 points on 50 percent from the field while Austin Phyfe and Noah Carter each contributed 11.

She was one of eight freshman to place inside the top-55. The Panthers finished top-25 for both the men and women with the former taking 24th by totaling 651 points and the latter placing 23rd with 622 points.

Volleyball gets four in 2022 class: Northern Iowa had three of its signees stay in-state with two of them are brought in as defensive specialists to join one setter and one hitter.

Cedar Falls product Alivia Bronner and Osage senior Meredith Street are expected to join the libero room UNI has. Bronner was on the Class 5A all-tournament teams as she was a catalyst in the Tigers run to the championship while Street played out of position has an outside hitter and walked away with over 200 kills and the conference Player of the Year honors.

Chloe Largent, a senior from ACGC, broke schools records in kills and hitting efficiency while also tallying over 800 digs and 200 service aces. The lone signee not from the Hawkeye State is Sydney Golden, who preps at Nizxa High School in Nixa, Missouri.

Goebel led the Stormin’ Pointers to a Class 3A state title in 2019 and paced them in scoring last season with 18.2 points per game as well as rebounding with 8.6.

Wharton has been a do-it-all player Bellevue West, leading it in scoring, assists and steals over the last two seasons.

Softball strengthens infield with trifecta: UNI signed a pair of players that are designated as utility players and a player that can play catcher or third base in the 2022 class.

In-state products Kate Lappe from Bondurant-Farrar and Adalyn Reynolds of Mount Ayr are power bat additions to the Panthers. Lappe roped for a batting average of .594 over the summer and was tied for the lead in the state with 1 home runs. Reynolds finished with 18 extra base hits while hitting .449.

Alexis Pupillo from Crystal Lake South fits that mold of Lappe and Reynolds with 13 home runs that she hit last season that drove in 37 runs and she also crossed home 46 times.

Behind the Scenes - At the World Cup media hub

Behind the Scenes - At the World Cup media hub

Tunisia our inspiration says USA captain ahead of Netherlands match

Tunisia our inspiration says USA captain ahead of Netherlands match

Northern Iowa quarterback Theo Day makes a pass against St. Thomas during the Panthers' home opener at the UNI-Dome.

University of Northern Iowa's Carly Spies hits the ball against Iowa State University on during the Panthers' home opener at McLeod Center in Cedar Falls.