Alabama coach Nick Saban and athletic director Greg Byrne have tested positive for COVID-19, three days before the second-ranked Crimson Tide is set to face No. 3 Georgia in a clash of Southeastern Conference and national powers.

Both said their tests Wednesday morning came back positive, and Saban said in a statement that he “immediately left work and isolated at home.”

Saban, who monitored practice Wednesday from home, said he didn’t have any symptoms as of early evening. But the second-ranked Crimson Tide will almost certainly be without their iconic 68-year-old coach on the sideline when they play Georgia.

Saban said he informed the team via a Zoom call at 2 p.m. Wednesday, about an hour after he learned of the test results, and that offensive coordinator Steve Sarkisian will oversee game preparations within the football building while he works from home.

Saban said Sarkisian, a former head coach at Washington and USC, will still call the offensive plays. Saban has led Alabama to five national titles since taking over the program in 2007, and also won one at LSU.

Saban wasn’t sure how game day will go when it comes to communication with his staff, but is confident he can still lead practices and run meetings from home via Zoom calls. He communicated with a team manager when he saw a mistake in practice and wanted a play repeated.

He plans to go through his usual Thursday routine, which includes watching the offense and defense practice, work on two-point plays, and will preside over meetings all from home.

“I didn’t leave the country or anything,” Saban said. “I’m just right down the street. And we have this technology, so it’s really unique.

“Now, I don’t have experience at that. But we’re going to do the best we can to keep everything as normal as possible.”

The Tide played at Mississippi last weekend, and Rebels coach Lane Kiffin said Wednesday his team had some positive tests. Saban said Alabama hasn’t “had any indication” of an outbreak within the team.

Saban said he and staffers — from coaches to secretaries — had done a good job of wearing masks around each other while in the football building. Asked about his No. 1 concern, Saban mentioned getting his players ready for the game, not his health.

“It’s a big game for them,” he said. “Our goal as coaches is always to get them in the best position they can be in to be able to have success, and we need to try to continue to do that. That would be the greatest concern that I have.

“I haven’t blocked anybody or tackled anybody, caught any passes, thrown any passes in a game in a long, long time, so it’s still going to be up to how the players are able to execute and it’s up to us to try to get them in the best position to do that.”

The news out of Tuscaloosa was a nother body blow for the SEC, which had postponed two games this week already: No. 10 Florida against defending national champion LSU and Missouri-Vanderbilt.

Florida coach Dan Mullen had 19 players and coaches test positive for COVID-19. Florida athletic director Scott Stricklin said Wednesday the number is now up to 21 positives with considerably more in quarantine because of contract tracing.

Those players likely would have been unavailable against the Tigers, leaving Florida with fewer than 50 scholarship athletes and less than the SEC’s threshold (53) for holding games amid the coronavirus pandemic.

The game was tentatively rescheduled for Dec. 12, the league’s built-in bye week before its annual championship. It’s the second SEC game bumped this week, following Missouri-Vanderbilt.

Florida hosts Missouri next, on October 24, and that game also could be in jeopardy.

“Hopefully we don’t have any more positives and we’re able to get on the other side of this and then we can get everyone back in a situation where you can go compete again,” Stricklin said.

Stricklin suggested traveling to Texas A&M may have been the root of the team’s outbreak, with two players who later tested positive telling team doctors they had symptoms before getting on a plane last Friday. One had a runny nose, the other a headache.

Neither told anyone, which Stricklin said would be addressed. He also hinted at potentially looking at tweaking travel protocols.

“I really think it could be as simple as not understanding symptoms,” Stricklin said, pointing to Florida having 10 positives over the previous 11 weeks. “I know people personally who have had the sniffles and a friend of theirs was COVID positive, so they went and got tested and found out they had it. They thought they just had something pretty common. ...

“As a college student, you have those things and it’s not uncommon. But in a COVID environment, it’s so important that we are hypersensitive to being diligent on that front. I don’t know that this was a situation where someone goes, ‘I don’t feel well, but I’m going to power through it.’ I think this is a situation where someone felt like, ‘I’ve got a sniffle, I need a Kleenex and I’m ready to play a game.’”

Florida’s shutdown came three days after Mullen’s comments about wanting to pack 90,000 fans inside Florida Field to create a better home-field advantage against the Tigers. Mullen didn’t double down Monday, but he didn’t back down, either.

He brushed aside criticism and praised his guys for how well they have handled COVID safety protocols.

He finally backtracked two days later, apologizing “if I offended people or anybody out there.”

“One of the things I want to encourage was whatever our local health officials come and out say, ‘This is the number of people that we’re going to allow at the game right now,’” Mullen said. “I want to encourage those people to come in, bring the energy, bring the excitement into the stadium and help our team to win and bring that energy that they bring of what makes the Swamp such a special place to go play in.”

Stricklin made it clear Wednesday that Mullen overstepped his area of expertise and added that the plan for the rest of 2020 would be to allow up to 17,000 fans (25% capacity) at Florida Field for home games.

“That number will change one day. I don’t know when they’ll change,” Stricklin said. “But until that changes, this is where we’re going to be.”

Alabama coach Nick Saban leads his team to the field before an NCAA college football game against Missouri in Columbia, Mo. 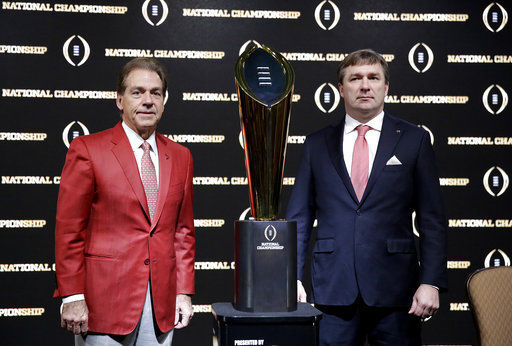