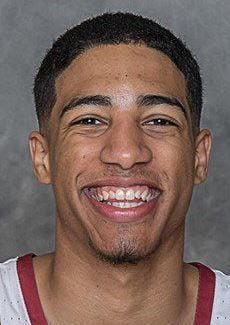 He drove inside off a pick and roll, jumped into the air as the defender guided him toward the baseline and as he was coming down, found a wide open Solomon Young for an easy layup.

“He had a great assist to Solomon and I guess that was his last assist,” Coach Steve Prohm said. “But that’s him. He got caught up in the air and then he makes the right decision at the last second.

“He wanted to play and he loves to play.”

Haliburton made the incredible play with a broken left wrist. Everything he did on the play was exclusively with his right hand. The star sophomore injured his wrist after a blocked shot late in the first half.

He tried playing in the second half, but his whole left hand was numb.

“I knew my wrist was broken when I was playing,” Haliburton said. “At halftime, I could move my hand but two minutes into the second half it became numb and I haven’t been able to move my fingers since.”

On Sunday, Haliburton got the news he knew was coming but still didn’t want to hear.

His left wrist was fractured and his season was over.

“I had a good idea on Saturday it was broken but I was still crushed on Sunday,” Haliburton said.

“Thankfully, my family was in town so I had my mom and my dad to lean on and have a shoulder to cry on.”

Haliburton said the recovery process is 12-15 weeks. He said Monday that the plan was to get a cast on, then in four weeks get the cast off and wear a splint and after another four weeks start rehab.

Haliburton was projected as a top-five NBA Draft pick by ESPN and as a top-10 pick by nearly every other mock draft prior to the injury.

“I made calls all yesterday (Sunday) making sure this didn’t hurt his draft stock,” Prohm said. “And from what I gathered, this shouldn’t hurt him at all. He’ll be fine once he’s healthy again.

“We’ll talk about that when we get there,” Haliburton said. “Right now I couldn’t care less and all I care about is Iowa State. I’m upset I can’t help my teammates on the court.

“Just because I’m physically hurt doesn’t mean I’m not mentally or emotionally invested. These are my brothers and my family and my home away from home. Even though I can’t be on the court, I’ll still do whatever I can to be a coach on the sideline or a cheerleader on the bench to do whatever I can do to help my guys.”

That’s what makes Haliburton a special player and person.

“In one year here he became an integral part to our program and our success,” Prohm said. “He was the guy. We lost Niang and we lost Naz, we lost Monte and we lost Matt — those guys. And it just felt like we got (another) one with Tyrese. You could see it when we were recruiting him. If we got him, then we’d have another one. That’s what I love about him.

“Forget all of the other stuff. He was a great fit for this university.”

Mitrou-Long and Marial Shayok actually reached out to Haliburton on Sunday to see how he was doing after they heard the news.

“I texted the guys yesterday and told them,” Haliburton said. “Terrence Lewis came and checked on me, Solomon Young has been in this situation before and he came and checked in on me, both Marial and Naz have reached out to me.

“They’ve all checked in on me and we all have the same ultimate goal and that’s to leave our jersey in a better place and make Iowa State a great place and be the best team we can.”

For his whole life, Haliburton has always had basketball. He’s never been injured and he’s never had it taken away from him.

Even on Monday before meeting with the media, Haliburton was getting shots up with one arm. His left arm was wrapped from the elbow down and looked like a club hanging by his side with his fingers sticking out the end. His swollen fingers looked like neatly packaged hotdogs.

“I have the right to sulk for a couple of days,” Haliburton said. “And I can be as mad as I want and as angry as I want, but it’s bigger than me and I need to help the next guys stepping into my role.

“I’m just figuring out how to cope with it. All of the real-world problems I’ve ever had, basketball has been my escape. But now I need to find that escape through my teammates, friends and family.”

Iowa State got big games from Michael Jacobson and Solomon Young as the Cyclones jumped on Texas Saturday.

Iowa State got big games from Michael Jacobson and Solomon Young as the Cyclones jumped on Texas Saturday.