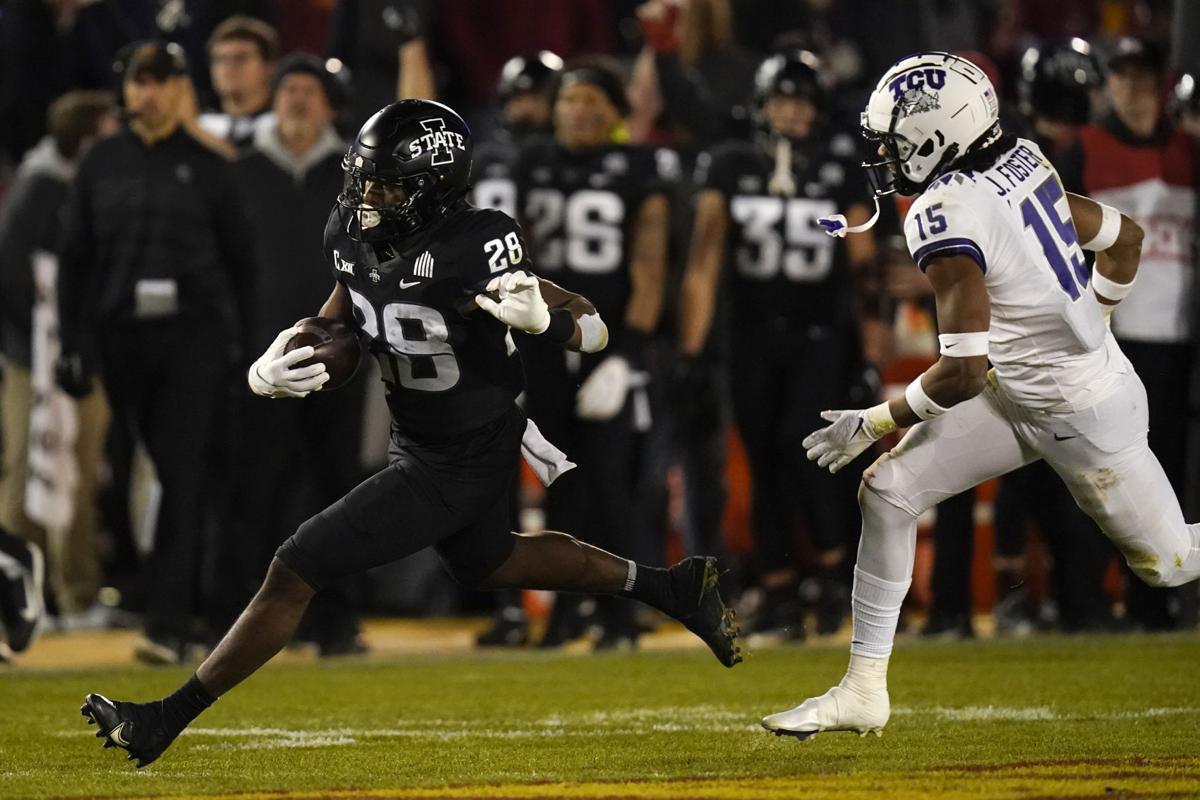 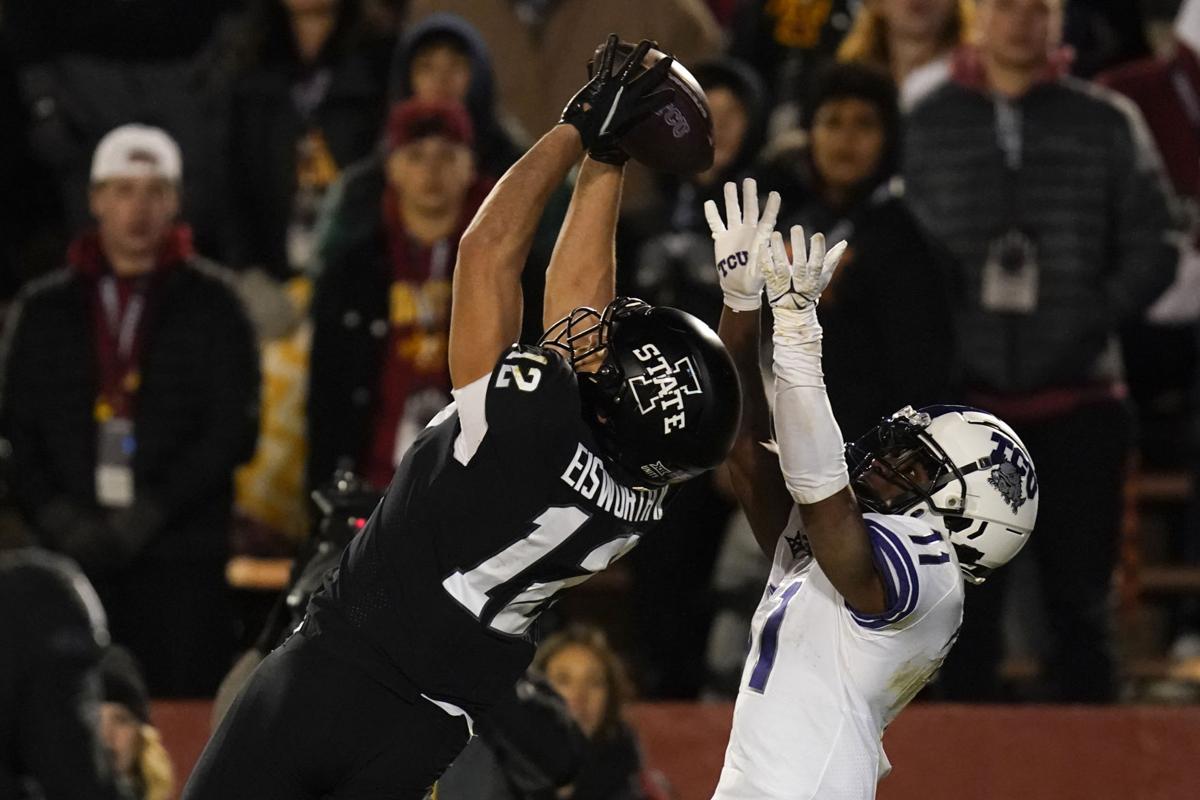 AMES — Iowa State running back Breece Hall had a lipstick stain on his left cheek after the Texas Christian game.

In the second quarter, Hall had a 39-yard touchdown run. It was his 24th-straight game with a rushing touchdown, an NCAA record. It has stood for more than 50 years, set by Arkansas’ Bill Burnett in 1970.

Hall gave the ball he scored the touchdown with to his mom afterward. That’s when she planted the kiss on her son’s left cheek.

“That run was for the record, and it just showed all the hard work that myself and my team put in for me to get that record in these three years,” Hall said. “It just meant a lot. Today, I came in and I wasn’t even focused on it. I just wanted to play hard for the seniors and send the seniors out the right way. Then with everything that happened, it was like a fairy tale ending for us.”

It was senior day at Jack Trice Stadium on Saturday, and while the seniors made their plays, junior running back Hall stole the show.

Hall had a career-high 242 rushing yards and three rushing touchdowns on 18 carries in Iowa State’s 48-14 win over TCU. He also had two catches for 39 yards and a touchdown. The four total touchdowns were a career high.

“It was as special as I’ve seen him,” Iowa State coach Matt Campbell said. “I would hate to discredit those other 10 players because it’s Xavier (Hutchinson) with the great blocking down field that opened it up, the offensive line had a great night and Brock (Purdy) was really precise in his decision making.

“But boy, oh boy, if there’s a better running back in college football, I’d love to see him.”

The first TCU drive after the half drive stalled thanks to a Will McDonald sack. That broke his own single-season record for sacks of 10.5, now 11.5. The McDonald sack was followed up by a Darien Porter blocked punt to give Iowa State the ball on the TCU 38 yard line.

Hall gained all 38 yards on the ensuing Iowa State drive, ending it with a 22-yard touchdown reception.

In the fourth quarter, after a Greg Eisworth interception in the end zone, Hall ran the ball for an 80-yard touchdown.

On the next Iowa State drive, Hall rushed the ball three times for 43-yards on three consecutive plays. The first was a 35-yard run and the second was a four-yard run and it was capped off with a four-yard touchdown run, his third rushing touchdown of the game.

Hall’s senior teammates had no problem celebrating his accomplishments and records on what was their night.

“He can have (the spotlight),” said Hutchinson, a senior. “When you break an NCAA record, by all means, I hope you go do it. That’s something that will last forever. I hope that record stays there for as long as possible.”

“It meant a lot for them to celebrate me,” Hall said. “I always looked up to them. I started out as a 17-year-old kid not really knowing who to look up to, and those guys were always there. Guys like Brock, Mike (Rose), Greg, Charlie (Kolar) and Chase (Allen). They always pointed me in the right direction keeping me humble and keeping me level.”

While Hall got the spotlight, the seniors had some impressive plays and stats themselves.

Allen capped off senior day with a 35-yard touchdown catch from Purdy.

Purdy finished his senior night completing 21 of his 30 passes for 262 yards and two touchdowns.

Hutchinson was Purdy’s favorite receiver once again. The senior had seven catches for 107 yards. His seventh catch set the Iowa State single-season record for receptions, with 82.

Kolar had five catches for 52 yards.

TCU was able to drive the ball all game but was unable to convert it into points. The Horned Frogs had 348 total yards but scored just the 14 points.

TCU had a failed fourth down conversion in the first half and with 13:11 left in the game, Greg Eisworth had an interception in the end zone.

Seniors Eisworth, Rose, Anthony Johnson and Jake Hummel all led the Cyclones in tackles with six.

“Just so many incredible stories,” Campbell said. “Yet, I think that’s the thing that makes this thing really, really special, you know? They never let us give up. Twenty-three seniors is really what went through today and every single one of those guys, when our backs up against the wall, when the world expects us to give up because the ball didn’t bounce our way, man, we just keep fighting.

“From my end of it, it was a magical night in every way, shape and form.”

ISU forward Tristan Enaruna making a name for himself in Ames

AMES — Almere is considered the newest city in the Netherlands.

Watch now: Badgers guard Brad Davison talks about how UW has come together as a team

Watch now: Badgers guard Brad Davison talks about how UW has come together as a team