IOWA CITY – Upon further review, Tyrone Tracy remains convinced he caught a third-quarter pass that was overturned by a replace official in Iowa’s 30-7 win over Kent State.

“I don’t know what more I could have done,’’ said Tracy, who caught five passes for 43 yards in the Hawkeyes’ third win in as many games this season.

Hawkeyes turn back Kent State to move to 3-0

The decision came as Iowa was attempting to add to a 16-7 lead and while the crowd of 61,932 vocally expressed its displeasured, coach Kirk Ferentz wanted to see a replay before cementing his final thoughts on the subject.

“I felt bad for the officiating crew because that’s a good crew. They worked a good game and they looked like fools out there because they’re at the mercy of whatever decisions get made upstairs (in the replay booth),’’ Ferentz said.

Ferentz maintains that the officials on the field should be the decision makers.

“They’re the ones that look like fools and they have nothing to do with (the replay decision),’’ Ferentz said. “That’s why they call the guy the referee, right? He’s responsible.’’

Playing on: Kent State’s only points Saturday came on a drive when cornerback Riley Moss got burned on a couple of pass plays.

“My eyes got caught in the backfield and I was ready for a little three-step hitch again like I had the first week, but they caught me on it,’’ Moss said. “They read my bluff.’’

At that point, Moss moved on against an offense that collected 185 of its 264 yards through the air on Dustin Crum’s 16-of-23 passing.

“It’s about how you come back from bad plays,’’ Moss said. “That’s what makes a good player. I think personally and as a defense we did that.”

Moss recovered the first fumble of his career in the end zone in the third quarter to deny the Golden Flashes a chance.

Paper or plastic: Iowa defenders got to Crum seven times, the most sacks Iowa has had in a game since matching that total in a 2000 game against Northwestern.

“It feels great to be able to put up a number like that,’’ said end Lukas Van Ness, who joined Joe Evans in recording two sacks apiece.

Keeping the faith: Ferentz gave senior running back Ivory Kelly-Martin a break after he recorded his second fumble of the season in the first half.

“Told him to keep his chin up, hang in there,’’ Ferentz said. “He’s going to be fine, a top-quality guy, voted as a captain this week. He does so much for our team beyond running the football. He’s made a lot of good plays for us. He’s just got to work through it.’’

Ferentz chose to give Kelly-Martin some space as the game progressed, providing redshirt freshmen Gavin Williams and Leshon Williams with the chance to carry the ball four times apiece.

The pair combined for 31 of Iowa’s 206 rushing yards and Gavin Williams caught three passes for 14 yards.

Long drive contest: Iowa’s 20-play touchdown drive was the longest scoring drive the Hawkeyes have had in terms of numbers of plays during Ferentz’s 23 seasons.

The previous long was an 18-play drive that resulted in a touchdown in a 2003 game against Illinois.

Iowa wide receiver Nico Ragaini (89) is tackled by Kent State cornerback Montre Miller (21) after catching a pass during the second half of Saturday's game in Iowa City. Iowa won 30-7. 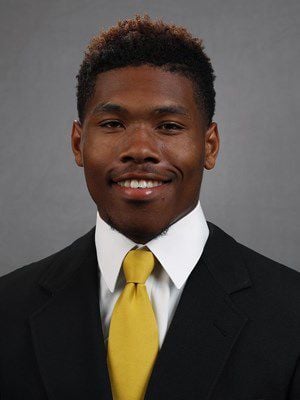