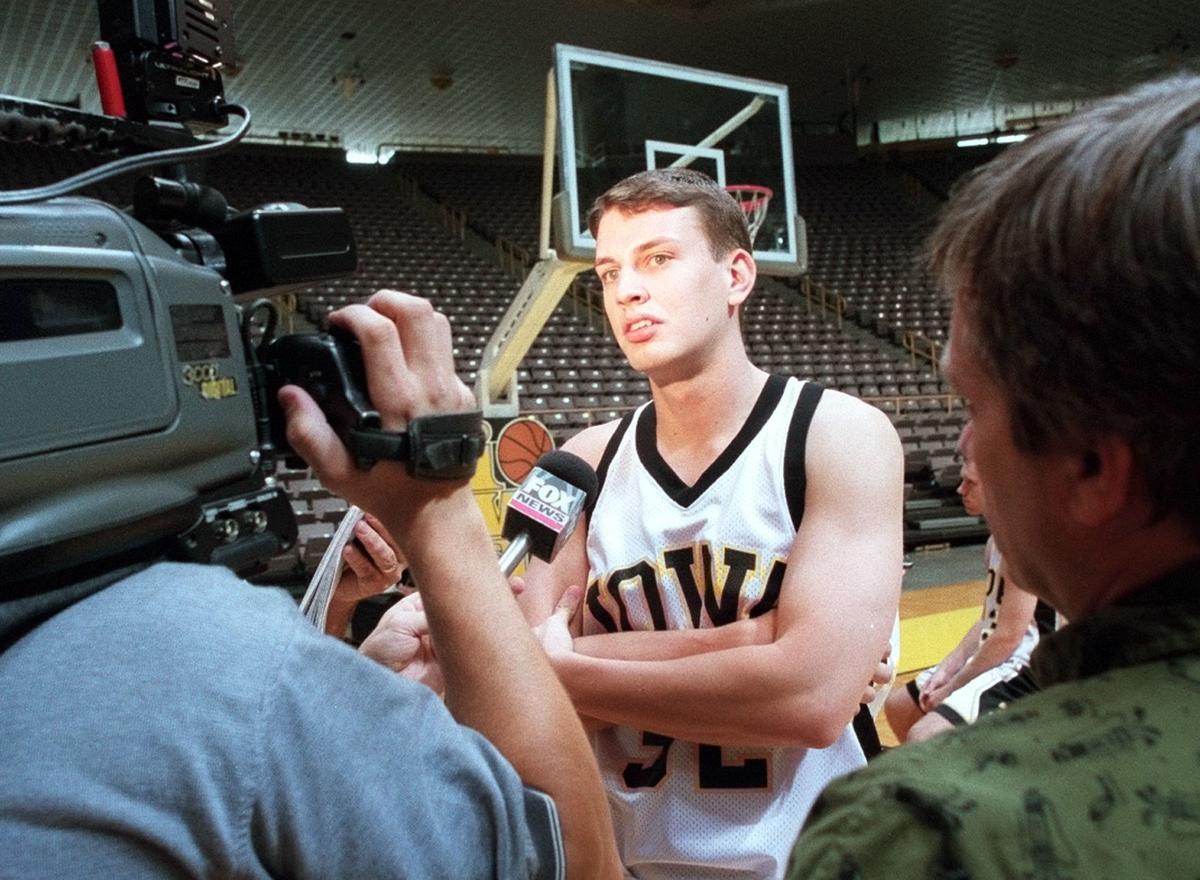 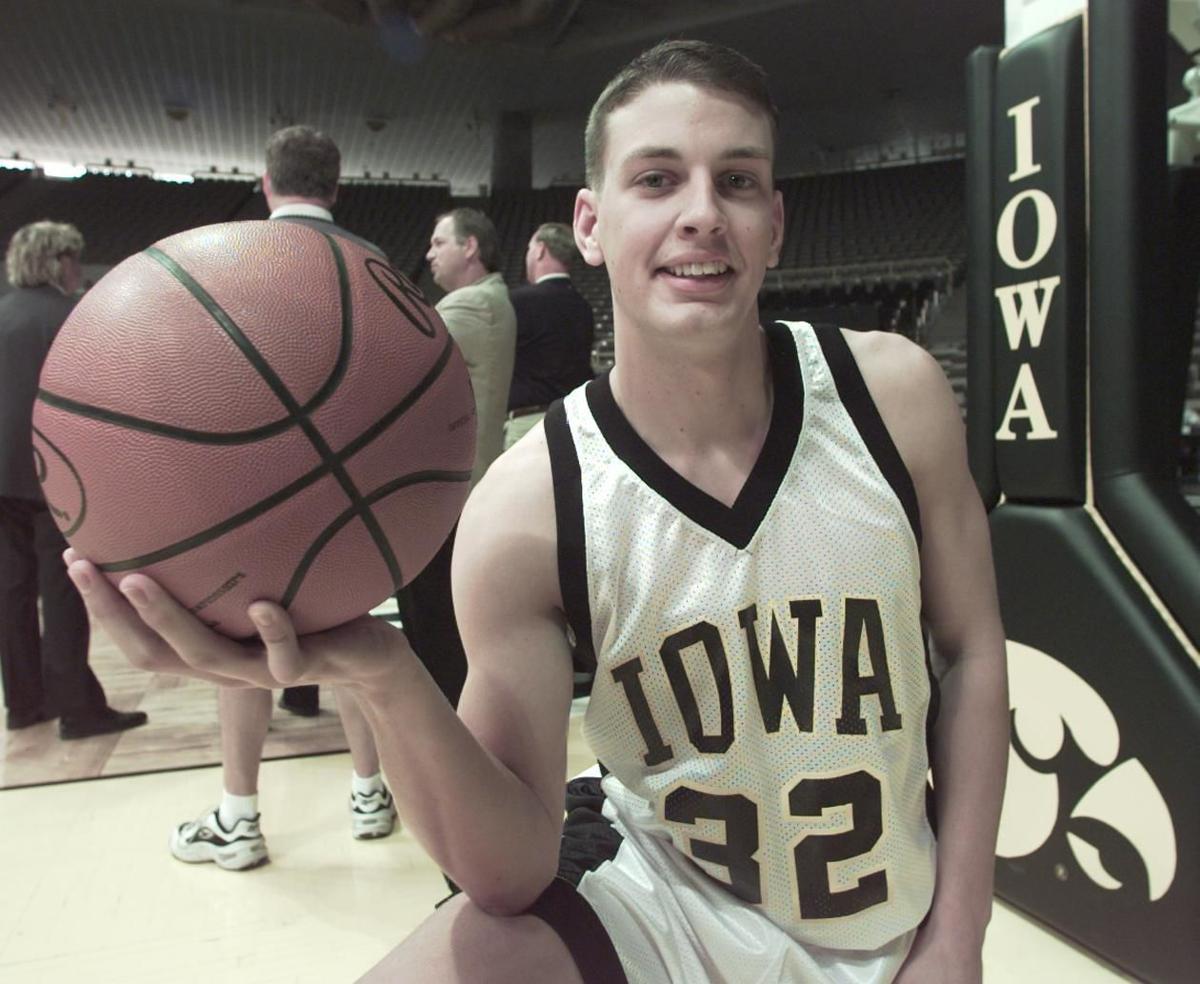 Michael Jordan celebrates the Bulls win over the Portland Trail Blazers in the 1992 NBA Finals in Chicago.

WATERLOO — It was the summer of 1997, and Kent McCausland was just looking for an opportunity to get better.

Coming off a sophomore season at the University of Iowa where the Waterloo native and former West High star had made a whopping 52 percent of his three-point attempts (70 of 134) for the Big Ten Conference runner-up, McCausland had stayed in Iowa City to work on his game.

VIDEO: ‘The Last Dance’ is Michael Jordan’s way to explain why he did what he did – Wilbon | SC with SVP

Early that summer, McCausland and teammate J.R. Koch walked into Iowa assistant coach Rich Walker’s office to ask if there were any camps they could work at during the summer.

“Coach Walker said, ‘Hey, there is this Michael Jordan camp I think I can get you in,’” McCausland recalls. “At the time, I didn’t think of how much it would mean. There was no guarantee you were going to meet Jordan or play with or against Jordan. Essentially it was go and play against other great college kids. That is what we went for, and that is what we did every night after camp.”

It turns out McCausland and Koch got to do a lot more than work at Jordan’s camp.

Recollections of that week have popped to the surface recently as McCausland watches “The Last Dance,” ESPN’s 10-part Michael Jordan documentary.

“Last night (May 10) was pretty good, probably the best,” McCausland said. “Episode No. 7, the last several minutes of No. 7, were really good because it gives you an insight, I think, on how he was driven so hard to win but also the weight of expectations he created for himself to push his teammates up to his bar, his level.”

McCausland’s brush with Jordan came between his sophomore and junior seasons at Iowa where he stills holds the Hawkeye single season (.522) and career marks for 3-point shooting. McCausland made 214 of his 472 career 3-point attempts (45.3 percent) and started on Iowa’s last Sweet 16 team in 1999.

Held at Elmhurst College in suburban Chicago, McCausland said Jordan would show up before lunch time during the week-long camp and put on an hour-long clinic for his campers.

“He would come in and do an all-camp address,” McCausland said. “He would do free throw technique or one-on-one moves … some sort of talk to the kids and maybe get a kid or two up and do a demonstration. It was pretty neat for the kids. Each kid got an autograph and picture with Jordan. Upper Deck was there to authenticate the signature and everything … real neat.”

McCausland has one of those photos somewhere in storage box in his Waterloo home. He also has video. It documents the night he, Koch and Jordan dominated on the court.

The story, McCausland recalls, started in the middle of the week as word spread throughout the camp Jordan was going to play in the counselor game. Instead of a few campers inside the gym, the place was packed. Campers, parents and anyone else who had gotten word showed up to watch the show.

“It was full. It was a small-college gym,” McCausland said. “So, Jordan hadn’t arrived yet, and the camp director said, ‘Hey, I need five shirts, five skins and let’s get this going and when Michael gets here he will jump in.’

“So, JR and I are in our shirts and JR is about to jump for the opening tip and you hear this murmur, noise from the other side of the gym. The cheers start to come and here comes Michael, just walking onto the court in his Carolina blue shirt. He walks out and says, ‘OK, one of you shirts has got to go, and I’m playing for the shirts.’

“JR and I look at each other and were like. ‘I’m not going anywhere.’ But there is one kid that volunteers and just walked off.”

McCausland surmises that kid regrets that decision to this day.

McCausland, Koch, a native of Peoria, Ill., along with Ben Caton, a starting guard for the 1997 Utah Elite Eight team and a forward from Bradley whose name has escaped McCausland and Koch, easily won the game with Jordan as their fifth.

“Of course we win, we had Michael Jordan on our team, right,” laughs McCausland. “After it is over the director comes out and says, ‘I need four new shirts and five new skins to play with and against him,’ and like I’ve said, there are 30 or more of us counselors, so plenty of volunteers.

“But Michael isn’t having any of that. He turns to the director and says, ‘Nope! We won. I got my squad and we are running all night.’”

McCausland can’t recall in detail every play that was made, but for the next 90-plus minutes he won game after game, five or six of them. He lobbed alley oops to Jordan for dunks, took outlet passes from him and finished. He also made a steal that led to a break-away Jordan dunk.

“I knocked down a 3 and he pointed at me and I pointed back at him,” McCausland said. “It was an electric, adrenaline feeling for an hour and a half of getting up and down the court and playing on the same team as Michael Jordan. I had all the pressure in the world. I had to make every shot I took. I had never felt that kind of pressure during a pick-up basketball game to not screw up.

“I remember distinctly, J.R., after one of those plays, he looks up like he is looking at the heavens and shook his hands like he had been at church. That was the feeling while you were playing in this game. It was like being in the presence of greatness. It is kind of indescribable, especially being a young player and being around a player like that.”

McCausland believes Jordan understood what this experience meant to the counselors, many of them whom were standout Division I players. He recalls how he was shaking and his voice was cracking when he called his father, Mac (former Iowa Hawkeye basketball television commentator) shortly after the games finished to tell him what just happened.

“He put on a good show,” McCausland said. “There was another time he went up for a rebound, there were two Division I, 6-foot-8, 6-foot-9 power forwards, big-time rebounders, but Jordan flies in-between them, grabs the rebound and in the middle of it, turns and says, ‘Excuse me.’

“And Michael wasn’t going to let us lose. He was just toying with some of those guys. They would try to guard him and he would back them down and he would talk to them, then spin and dunk or spin and hit his fall-away jump shot.

“That was kind of their experience. I think he knew this was a great experience for everyone that was at the camp, including the players/counselors. So, I think the opportunity to back one of these kids down and talk some junk to them was kind of making their basketball career, too. It was going to be one of their highlights they remember. He had control of everything that was going on in that game.”

As far as that video of the encounter with Jordan, McCausland knows exactly where that is. He recently sent it to Legacy box to be converted from VHS tape to digital.

“Nobody has a VCR anymore. Plus, I wanted to make sure that evidence lasts a long time,” laughed McCausland.

The final two episodes of “The Last Dance,” which features another former Iowa star, B.J. Armstrong, will air at 8 p.m. Sunday on ESPN.

ESPN has hit the quarantine gold mine with “The Last Dance,” the 10-part documentary that chronicles the career of NBA legend Michael Jordan a…

WATERLOO — Foundations and philanthropists have opened their wallets for a major Boys and Girls Clubs of the Cedar Valley expansion.

Local woman gets hole in one

Michael Jordan celebrates the Bulls win over the Portland Trail Blazers in the 1992 NBA Finals in Chicago.

ESPN has hit the quarantine gold mine with “The Last Dance,” the 10-part documentary that chronicles the career of NBA legend Michael Jordan and the Chicago Bulls dynasty of the 1990s. And so have sports card dealers.