IOWA CITY – Terry Roberts has seemingly been everywhere he needs to be on special teams for the Iowa football team.

Filling the role of the gunner, he’s frequently the first player downfield, creating a little havoc and spoiling the return hopes of Hawkeye opponents.

In Saturday’s 2:30 p.m. game against Purdue, Roberts will find himself in a new role for second-ranked Iowa.

He’ll be a starter.

For the first time in the 27 games he played in for Iowa, Roberts will be in the lineup in the starting right cornerback position that has been filled by Riley Moss during Iowa’s 6-0 start.

When Moss went down with a knee injury during last weekend’s 23-20 win over Penn State, Roberts stepped in and competed.

He broke up one pass in the game, part of a season which has seen the 5-foot-10, 180-pound fourth-year junior contribute nine tackles and record the first interception of his career during Iowa’s win at Maryland.

“He’s been doing a great job, trying to learn behind the experienced guys,’’ Koerner said. “In practice, he’s shown that he is a capable player. We’ll need him to step in there on Saturday. We’re confident in him as well.’’

No. 2 Iowa will be without Riley Moss Saturday

Cornerback injured a knee in victory over Penn State.

Linebacker Jack Campbell said Roberts is prepared to fill in for a player in Moss who shares the national lead with four interceptions this season.

“Riley’s a big part of our defense, but throughout coach Ferentz’s time here, he’s always preached the ‘next man up’ mentality,’’ Campbell said. “You saw that on Saturday. Terry stepped in and did a phenomenal job. Whoever steps in, we expect them to uphold the standard.’’

It’s a standard that Roberts has worked to meet with his responsibilities on special teams.

“I’m always trying to give 110 percent whenever I’m on the field,’’ Roberts said. “Special teams has been my way to get out there. For most of the guys on offense and defense, that’s where it starts. It’s where you prove you can do the job.’’

His work there and in practice positioned Roberts to move onto the second-team spot on the depth chart at right cornerback following spring practices this year.

Iowa coach Kirk Ferentz said prior to the Penn State game that he considered Roberts to be a starter even if he hadn’t started a game for the Hawkeyes.

“There are a couple of good players that are veteran guys out there (in Moss and Matt Hankins). Otherwise, he would be starting for us,’’ Ferentz said. “For him to get that action out there (at Maryland), for him to get that pick, that was great. He’s been doing a great job on special teams for sure.’’

It’s a role that traditionally has proven to be a launching pad for Hawkeye players.

Production on special teams frequently leads to expanded opportunities on defense, something Roberts has provided since seeing the first action of his college career in Iowa’s 2019 season opener against Miami (Ohio).

Two weeks later, it was Roberts who positioned Iowa State’s Datrone Young to collide with teammate Deshaunte Jones and cause a fumble on a punt return with just over a minute left that helped Iowa secure an 18-17 victory over the Cyclones.

His speed in getting to the return man or to balls that have soared off of Tory Taylor’s leg have led to comparisons between Roberts and a former Hawkeye who shares Roberts’ hometown of Erie, Pa.

He is a product of the Cathedral Prep program that sent Bob Sanders and his hard-hitting ways to Iowa two decades ago.

Roberts has heard the stories, but shuns the comparisons.

“Bob is his own player and I’m my own player,’’ Roberts said. “I try not to compare. Bob is a great player and that’s what I want to be.’’

Another former Hawkeye defensive back from Erie, Jovon Johnson, tipped Iowa coaches off about the potential he saw in Roberts.

Throughout his own lengthy career in the Canadian Football League, Johnson hosted summer camps in his hometown and he encouraged Hawkeye recruiters to take a good look at Roberts.

“Erie has been really good to us,’’ Ferentz said. “We haven’t had a lot of guys from there, but the ones we’ve had have been pretty good.’’

Hawkeyes have a Purdue problem 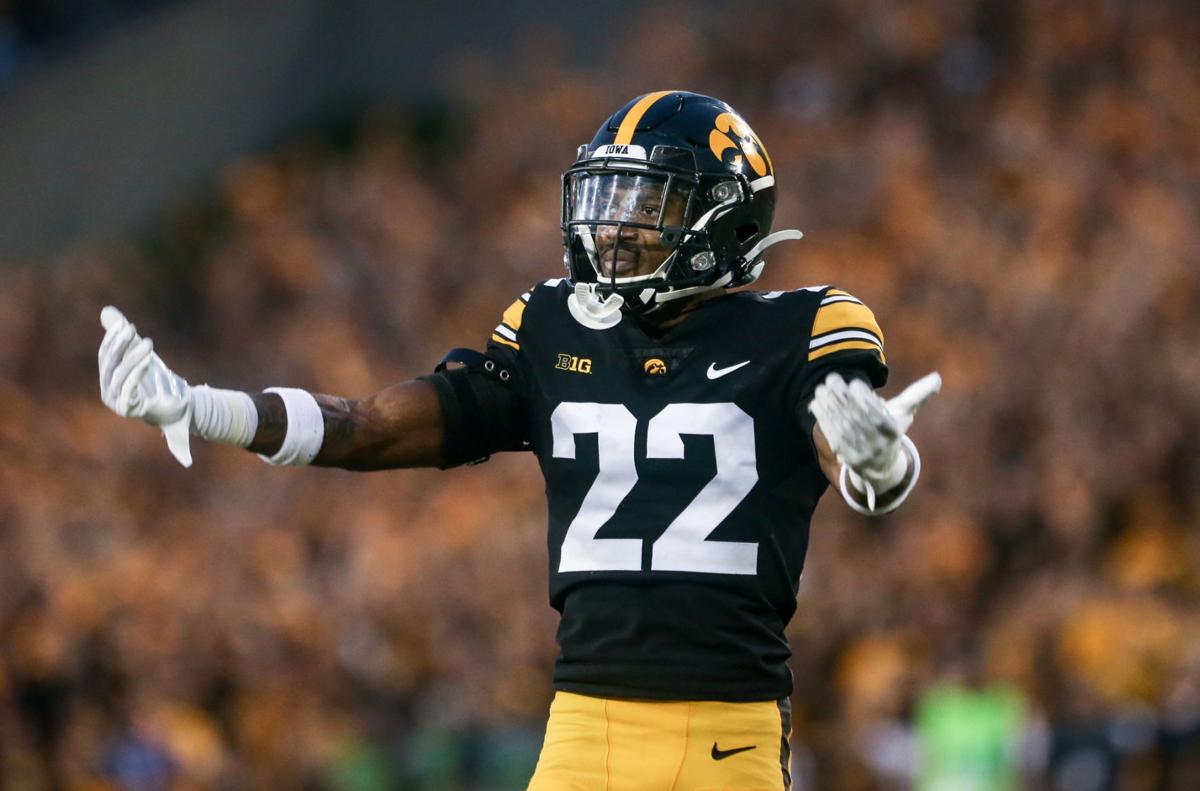 Iowa’s defensive back Terry Roberts (22) signals to the crowd during their game against Penn State at Kinnick Stadium Saturday, Oct. 9, 2021, in Iowa City. 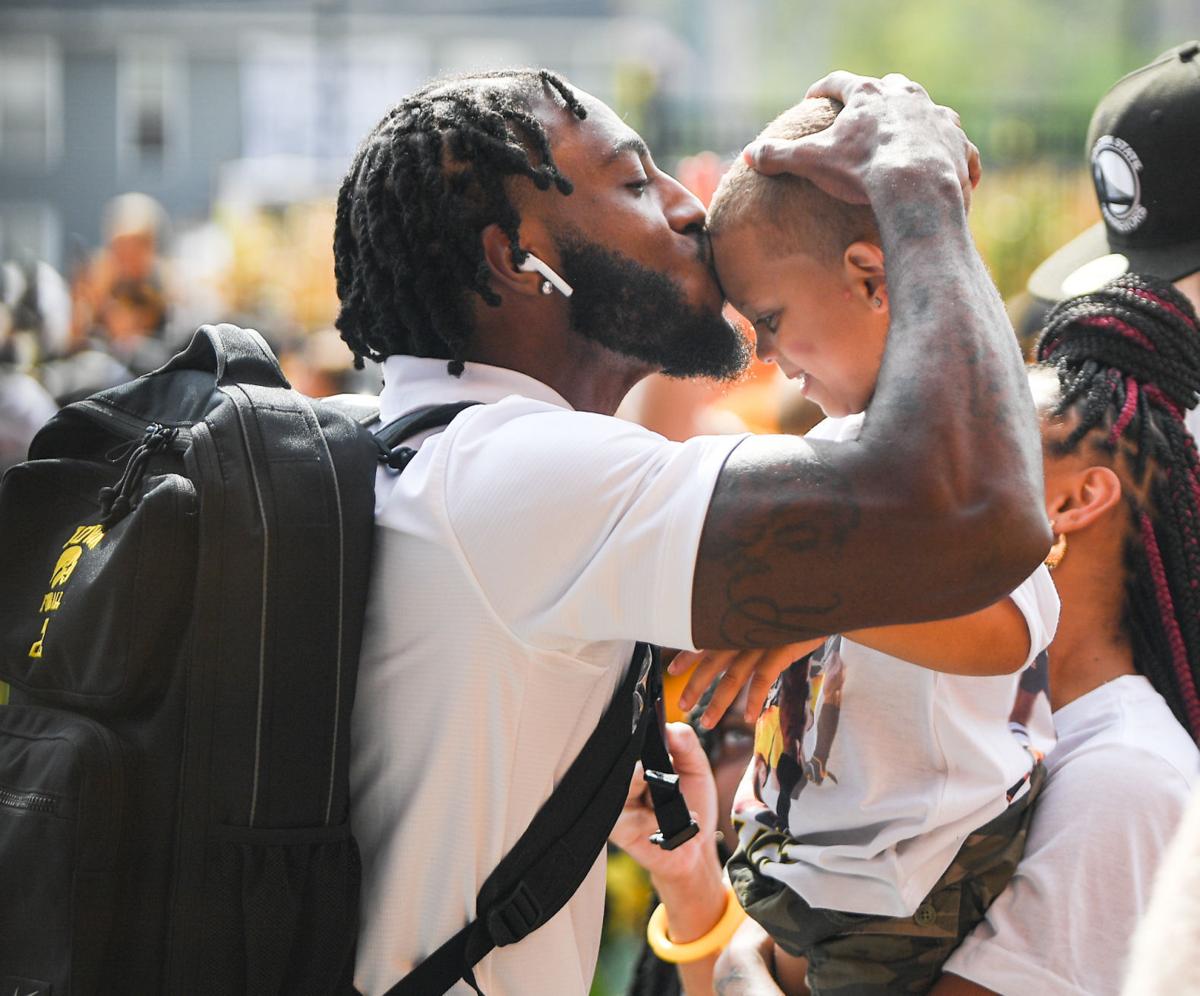 Iowa’s defensive back Terry Roberts (22) kisses his nephew Hercules, 3, before their game against Penn State at Kinnick Stadium Saturday.