IOWA — The Iowa basketball team took Sunday and Monday off.

They had to. It was required by NCAA rules. But it probably was a good thing anyway. The Hawkeyes may need their strength for what lies ahead.

Especially since they will be even more shorthanded than they already were for at least one game. Junior Cordell Pemsl has been suspended for Thursday’s game against Indiana for a violation of the university’s student-athlete code of conduct.

Pemsl was arrested in Iowa City in the early morning hours Monday for driving with a revoked license. The 6-foot-9 forward pleaded guilty to driving while intoxicated in September and lost his license for six months as a result.

He was pulled over by police at about 1 a.m. Monday because of a broken taillight cover and when it was determined he did not have a valid license, he was taken into custody. He faces a charge of driving with a revoked license, a serious misdemeanor punishable by up to one year in jail.

Pemsl, who was suspended for two games as a result of the previous infraction, has played in 22 games this season, all off the bench, averaging 2.4 points and 2.8 rebounds per game.

Although he is averaging only about 12 minutes per game, it leaves the Hawkeyes (17-7, 8-5 Big Ten) with only eight scholarship players available.

At least the players got a couple of days off to get rejuvenated for a very challenging seven-game stretch to close out the regular season.

NCAA rules require that players get at least one day each week in which they are not required to take part in any sort of team activities. No game. No practice. No film sessions. Nothing.

But there are exceptions. If a team has three games in one week, it can go without a day off as long as the players get two days off the week before or the week after. During a recent stretch in which the Hawkeyes played five games in 13 days, McCaffery had them working every day.

“We pretty much have to keep grinding and you don’t give them any time off,’’ McCaffery said last week. “You can cut it back, watch some film, do some shooting, but you’ve got a lot of stuff to cover.’’

This two-day break was the requisite makeup for that stretch.

McCaffery said he would have given his players Sunday off anyway. He admitted he likely would not have given them Monday if the NCAA didn’t require it.

“We definitely need it because this has been a long stretch for us, going on the road and playing really tough teams at home and not being able to get any off days,’’ center Luka Garza said. “It’s tough. So now we’ll be able to regroup, get in the gym individually, heal our bodies and be ready for this tough road trip.’’

The Hawkeyes play at Indiana on Thursday, then have a noon date at Minnesota on Sunday.

It’s the start of a closing stretch of seven games against formidable teams. Indiana’s recent struggles have dropped the Hoosiers to No. 61 in the NCAA’s NET rankings, but the other six remaining opponents are all in the top 40. Only three of those games are at home in Carver-Hawkeye Arena, where the Hawkeyes have won 11 straight games.

“I think we’ve put ourselves in a good position to be one of the top teams in the Big Ten,’’ sophomore forward Joe Wieskamp said after scoring a career-high 30 points in a Saturday rout of Nebraska. “Obviously, we’ve lost a couple of games we all think we could have won but I think for the most part we’ve had a pretty good season.

“We’re looking forward to a couple of days to recharge our bodies and really focus on the end of the season. We’re kind of in the middle of the pack and we could easily fall toward the bottom. That’s how good the Big Ten is. We want to do what we can to stay near the top.’’

LET IT FLY: Garza’s father, Frank, wore a microphone during the television broadcast of Iowa’s game against Tennessee in the NCAA Tournament last March and at one point he shouted “Let the peacock fly’’ while exhorting on the Hawkeyes.

The phrase has caught on with fans and now Frank is having t-shirts made. All proceeds from the sale of “Let the peacock fly’’ shirts will be donated to charity with 55% going to Iowa public schools and 45% going to the Elevate youth programs of Washington D.C.

Shirts can be purchased online at letthePeacockfly.com.

Garza in the run for two national honors

The Hawkeye star is a junior on the men's basketball team. 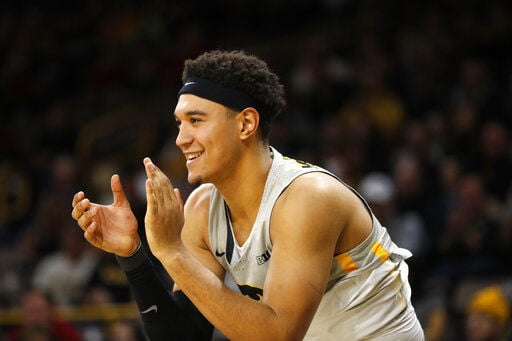 In this 2018 photo, Iowa forward Cordell Pemsl celebrates during a game in Iowa City. 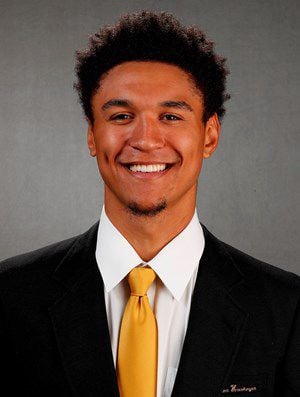