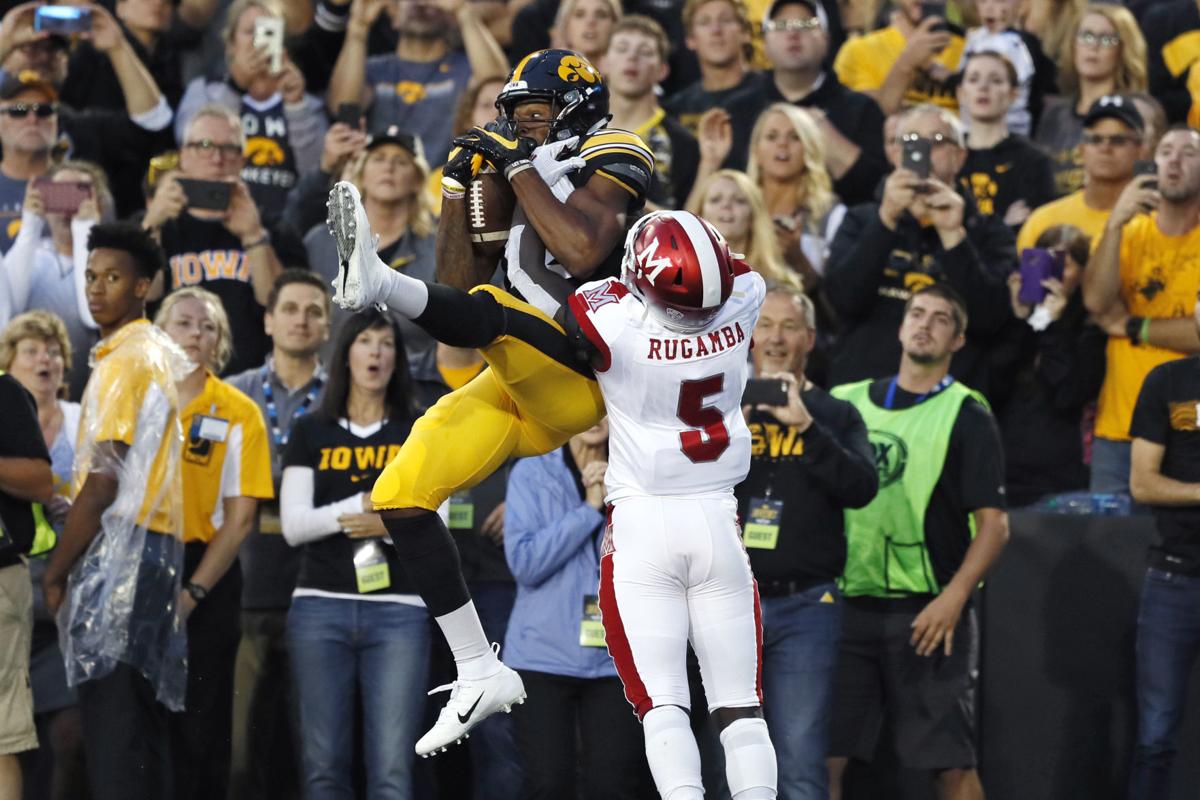 Miami (Ohio) defensive back Emmanuel Rugamba (5) breaks up a pass intended for Iowa wide receiver Brandon Smith during the first half Saturday night at Kinnick Stadium in Iowa City. 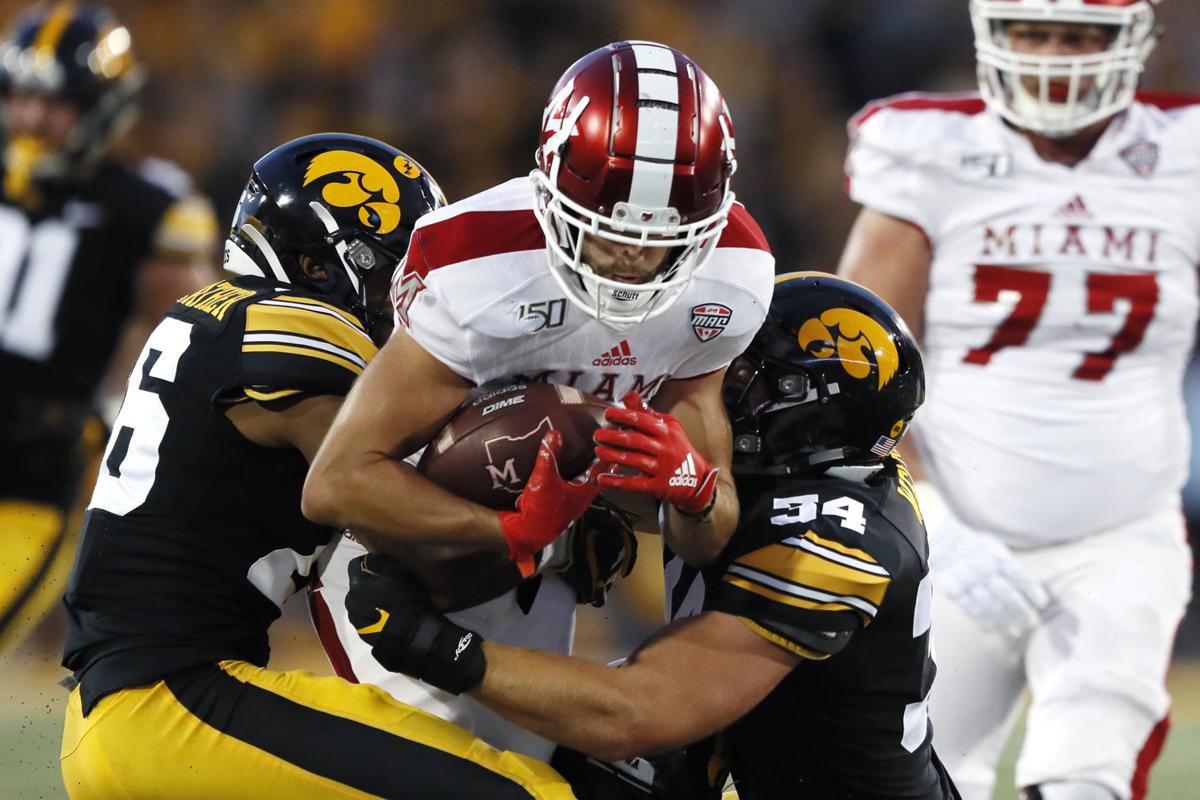 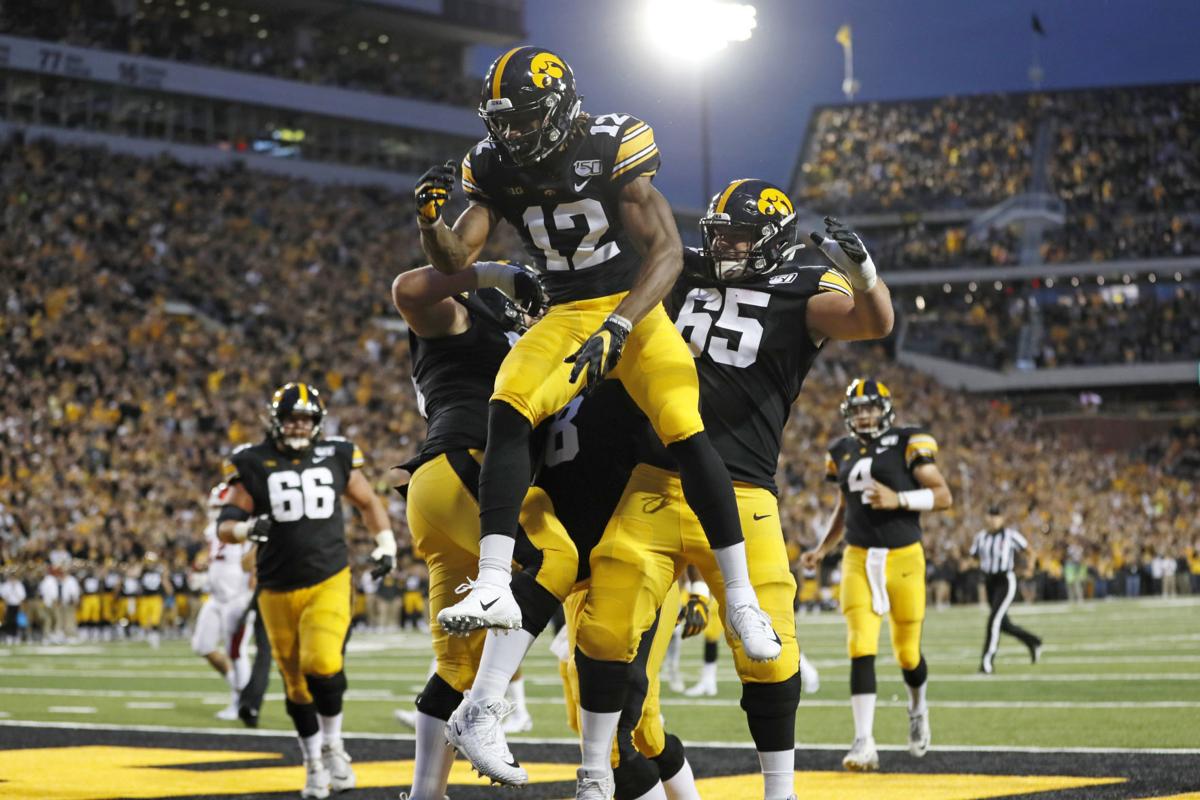 Iowa wide receiver Brandon Smith (12) celebrates with teammates after catching a touchdown pass during the first half of Saturday night's win over Miami (Ohio) in Iowa City. 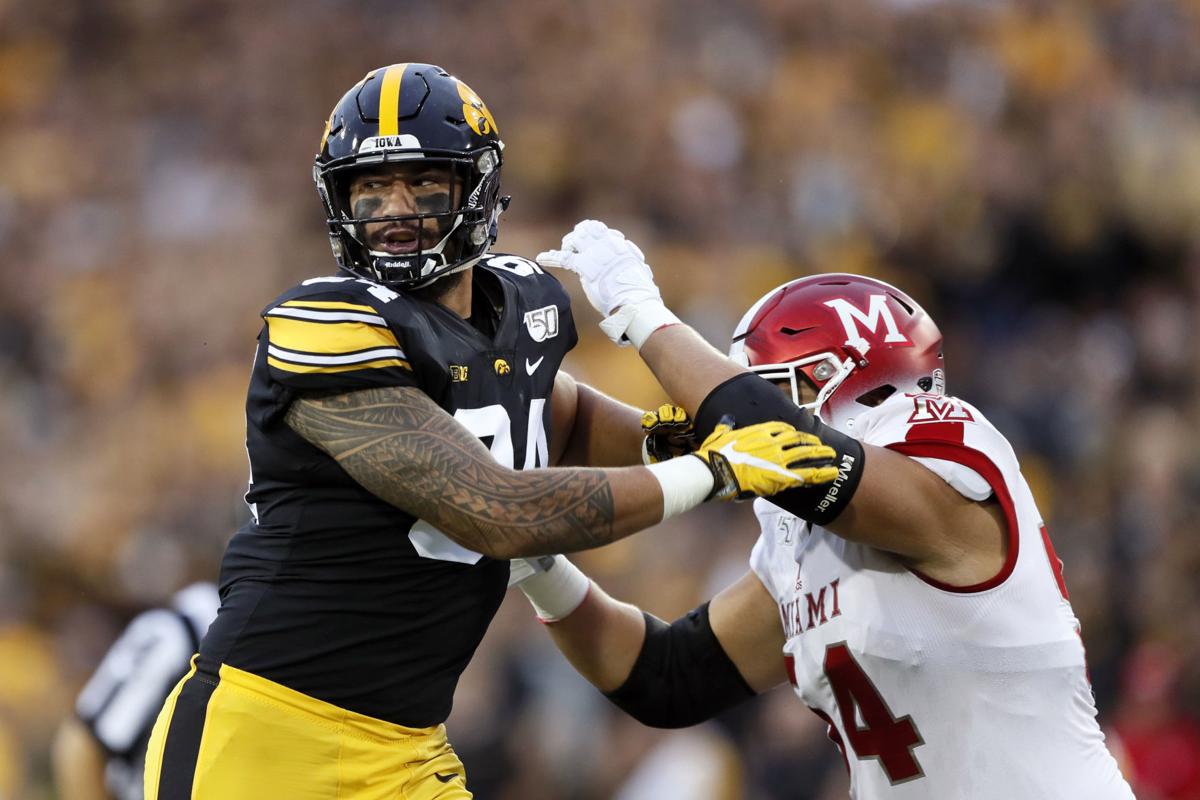 IOWA CITY – Iowa’s season-opening 38-14 victory over Miami (Ohio) on Saturday night was a little bit like a wedding.

The Hawkeyes blended something old, something new, something borrowed and something formerly maize and blue to pull away to the win in front of a sellout crowd of 69,250 at Kinnick Stadium.

An old Iowa standby, a sturdy rushing attack, piled up 213 of the 465 yards of the Hawkeyes accumulated against the RedHawks in the first-ever season-opener played under the lights at Iowa.

Senior quarterback Nate Stanley borrowed from some successful connections in his past while throwing for 252 yards.

He leaned on returning junior receivers Brandon Smith and Ihmir Smith-Marsette and junior backs Mekhi Sargent and Toren Young early to make plays before working new Hawkeyes into the mix.

Sargent ran for 91 yards and caught four passes for 65 yards to lead Iowa, which saw Michigan transfer Oliver Martin catch his Hawkeye touchdown pass to open the scoring in the Hawkeyes’ 28-point second half.

“We were just taking what the defense gave us. We were very confident, coming off of camp,’’ Stanley said.

In a three-point game at the half, a pair of third-quarter touchdowns allowed Iowa to open a bit of a margin against the Mid-American Conference opponent.

Martin and redshirt freshman Nico Ragaini positioned the Hawkeyes to build a lead that reached 24-7 after three quarters.

Martin, granted an eligibility waiver by the NCAA on Wednesday, saw his first action during Iowa’s first drive of the third quarter.

He took the field after Stanley had hit Shaun Beyer for an 18-yard gain, serving as a decoy when Stanley handed off to Smith-Marsette for a 16-yard carry to the Miami 9-yard line.

Stanley hit Martin in the left side of the end zone for a nine-yard scoring strike with 10 minutes, 6 seconds to go in the third quarter, extending the Iowa lead to 17-7.

“He has a good play-making ability,’’ Stanley said. “We’ve seen that all summer.’’

Ragaini caught a 45-yard pass to set up the Hawkeyes’ next score, a two-yard carry by Mekhi Sargent.

A Brady Ross fumble on Iowa’s next possession denied the Hawkeyes a chance to add to their 24-7 lead.

Andrew Homer pulled down a 20-yard pass to pull the RedHawks within 24-14 with 12:53 remaining in the game.

The Hawkeyes answered with a clock-chewing, 13-play, 75-yard drive that culminated in a two-yard touchdown run by Toren Young with 5:56 to play.

An interception by Michael Ojemudia on the next snap positioned the Hawkeyes to add one final score to their lead with just over three minutes to play.

His 14-yard return to the 23-yard line set up Stanley to hit Ihmir Smith-Marsette with a six-yard touchdown pass to give the Hawkeyes their winning margin.

Iowa took a 10-7 lead into the locker room at the break, collecting points on two of its first three possessions of the season to withstand a strong start by Gabbert, a true freshman quarterback who threw for 186 yards.

The 6-foot St. Louis native who didn’t have a scholarship offer from a power-five program and the brother of former Missouri quarterback Blaine Gabbert, connected on seven of his first nine passes.

He connected on a pair of 20-yard strikes to Luke Mayock during a 10-play, 77-yard drive that ended with an 11-yard touchdown pass to Jack Sorenson which allowed the RedHawks to open a 7-3 advantage with 11:54 to play in the second quarter.

Young carried for gains 12 and five yards on the next two snaps, opening a drive that reached methodically reached midfield before Stanley hit Sargent for a 41-yard gain to the RedHawks’ 9-yard line.

Stanley hit Brandon Smith on a fade route for the score which put Iowa in front for good with 8:20 remaining in the half.

Keith Duncan provided Iowa with its first points of the season after a 13-play drive that ate 6:50 off the clock midway through the opening quarter stalled.

A 17-yard run by Sargent and a 16-yard gain by Stanley on a bootleg moved the Hawkeyes to the Miami 24. A pair of runs by Young moved the ball inside 10, positioning Duncan to connect on a 21-yard field goal with 1:17 remaining in the opening quarter.

Sheldon Croney scored on a 1-yard run in the third overtime as No. 21 Iowa State survived an upset bid by Northern Iowa Saturday, 29-26.

If the crowd was any kind of indicator, McElvain was electric at times.

Miami (Ohio) defensive back Emmanuel Rugamba (5) breaks up a pass intended for Iowa wide receiver Brandon Smith during the first half Saturday night at Kinnick Stadium in Iowa City.

Iowa wide receiver Brandon Smith (12) celebrates with teammates after catching a touchdown pass during the first half of Saturday night's win over Miami (Ohio) in Iowa City.