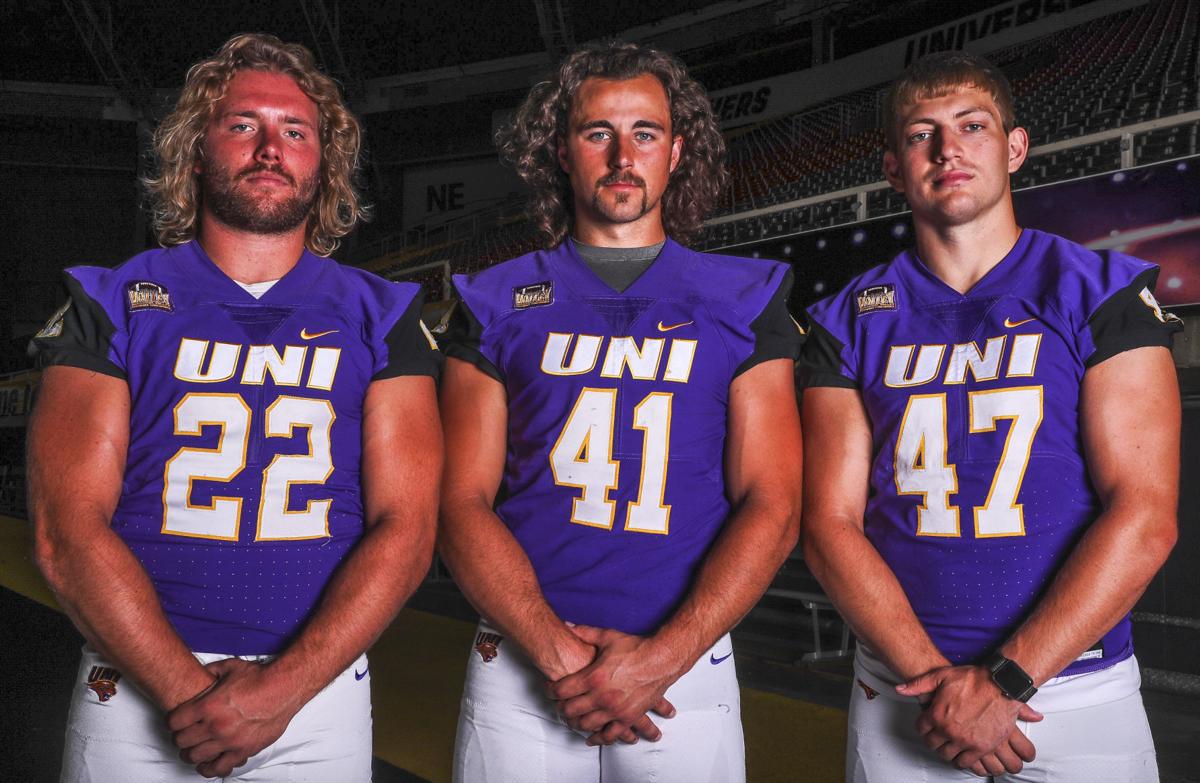 University of Northern Iowa linebackers, from left, Bryce Flater, Spencer Cuvelier and Riley Van Whye pose for a photo during the Panthers' media day at the UNI-Dome on Aug. 10. 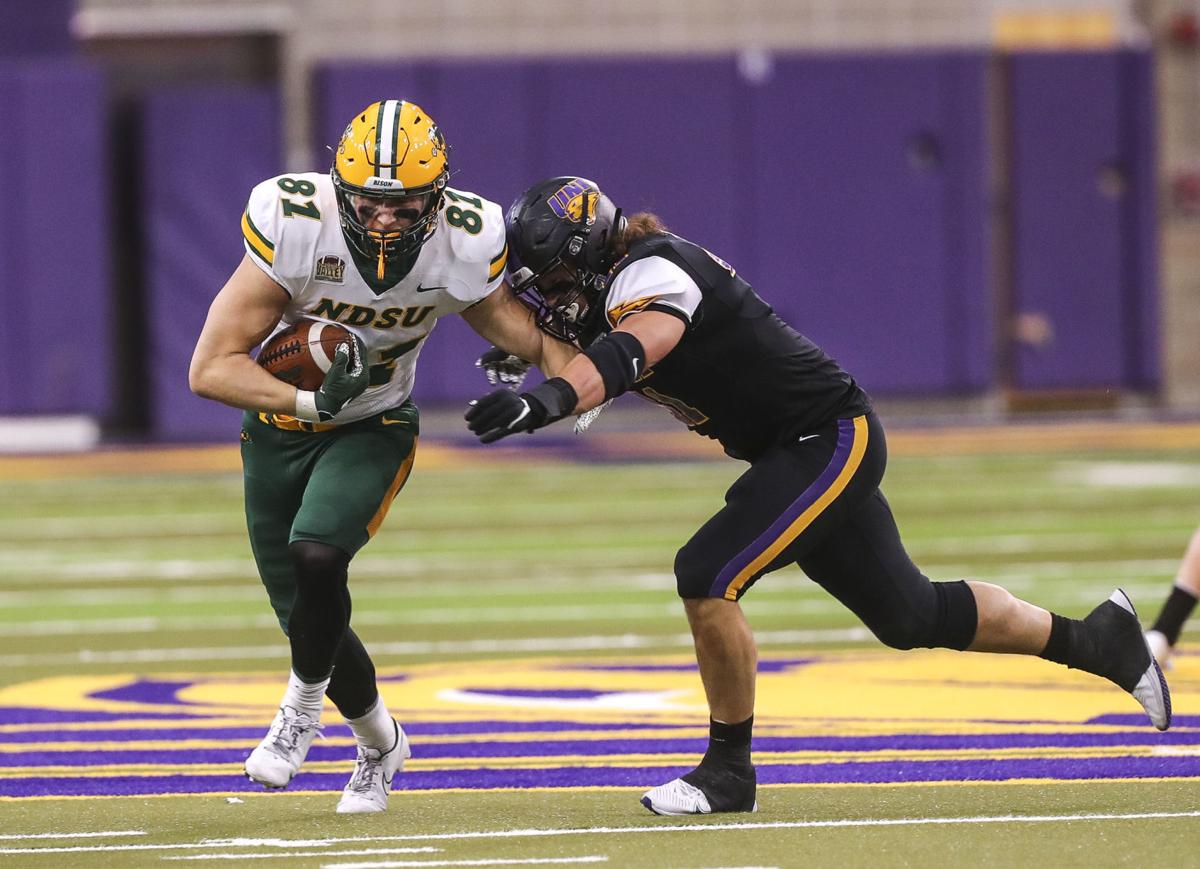 The veteran Northern Iowa defensive coordinator is a huge fan of his all-conference linebacker.

“Spencer is a very sharp kid who has done a great job for us,” Johnson said. “He plays hard and he’s very coachable. He’s a really good kid.

The long, flowing locks that Cuvelier possesses really are quite impressive.

“I haven’t cut my hair since my freshman year – so I’ve been growing it for the last couple of years,” Cuvelier said with a smile. “Bryce Flater has grown his hair out, too, and we look like WWE pro wrestlers. We’re a linebacker duo with a good head of lettuce and it’s something we just have fun with.”

The 6-foot-3, 245-pounder from Cresco looks like he could model for GQ magazine with his long hair and chiseled physique. He’s also a heck of a football player.

Cuvelier can’t wait to return to the football field when UNI opens its season this Saturday at Iowa State.

He suffered a torn ACL in his knee during his first game at Iowa Central and received a medical redshirt.

Cuvelier came back strong the following season in 2018. He earned all-conference honors for the Tritons after recording 96 total tackles, including 22 for losses.

He joined the UNI program the next season and made an immediate impact. He ranked third on the team with 88 tackles.

Cuvelier followed with a superb campaign this past spring, earning first-team all-conference honors after averaging 10 tackles per game for the Panthers.

He also is an excellent student and made the conference’s all-academic team.

Cuvelier’s first game in a Northern Iowa uniform came two years ago at Iowa State. The Panthers fell in triple-overtime.

“It was such a long game,” Cuvelier said. “I remember being exhausted by the time it was done. And I remember it being kind of surreal for me – I went from junior college and playing in front of maybe 1,000 fans to playing in front of 60,000 fans at Iowa State. It was a massive jump between two levels of football.”

Northern Iowa’s Week 1 opponent has received plenty of preseason hype, and deservedly so, after returning most of its players from last year’s nine-win season. The Cyclones are ranked No. 7 nationally in the preseason, and Cuvelier and his teammates know it will be a tough test for UNI.

“Playing Iowa State, it’s definitely a great challenge for us,” Cuvelier said. “They have a very good team. We have good players and preseason All-Americans on our team, too. It will be great to compete against a high-level team like that.”

Cuvelier is one of the leaders on a strong UNI defense that allowed just 15 points per game during the abbreviated seven-game spring season.

“We have a lot of great players on defense and we have great coaching,” he said. “Our coaches do a heck of a job with each position and they come up with a great scheme each week. They make it easy for us to learn and that helps us play better.”

“Jared makes this thing go,” Cuvelier said. “He takes on the double teams and the triple teams, and if he doesn’t get double-teamed he’s making the tackle. It’s very nice to be able to sit behind a guy who is going to take up those blockers. That allows us to be free and find the football.”

The 23-year-old Cuvelier actually has this season and next season left before he completes his college eligibility. The NCAA granted athletes an additional season because of COVID’s widespread impact.

“I’m planning on playing both seasons,” Cuvelier said with a smile. “For now, I’m just ready to get this season started. This team, we can go as far as we want to go. It’s going to be up to us as far as the amount of work we put in. If we keep battling, I think we will be sitting where we want to be.”

University of Northern Iowa linebackers, from left, Bryce Flater, Spencer Cuvelier and Riley Van Whye pose for a photo during the Panthers' media day at the UNI-Dome on Aug. 10.