CORALVILLE – Wartburg College wrestler Kyle Briggs could write an essay or deliver a long, poignant speech on tightness of the wrestling community.

But Briggs didn’t need to write that essay or compose that speech because he said the only verification needed is what has happened in the wrestling community since Feb. 3.

Last year, the COVID-19 pandemic was just starting to overwhelm the United States. This year’s cancellation came because not enough Division III programs committed to participating in the championship event during the pandemic.

In the past month guys like NWCA Division III Hall of Famer Dick Simmons, former Iowa Hawkeye wrestler Luke Eustice and NWCA Executive Director Mike Moyer, among others, came to the rescue.

And because of their efforts, Friday more than 300 Division III wrestlers will take part in the NWCA Division III Championships at the Xtream Arena in Coralville.

“The wrestling community is a tight-knit community,” said Briggs, the top seed at 174. “It doesn’t matter if were on the same team or competitors, we come together to support each other.

“I’m so appreciative of people who have stepped forward, especially guys who know wrestling, and will cater to us. We’re going to get a pretty well run tournament.”

“These guys…wow,” Wartburg College head coach Eric Keller said. “Throwing it together as quick as they have. All the work those two have put in and the crew they have. To give our guys, to give all our Division III wrestlers an opportunity to compete at a national event…so grateful.

Wartburg College also provided a major boost to making sure the event was going to be run as safely as possible.

Wartburg has donated all the COVID -19 tests and its head athletic trainer Ryan Callahan will run all testing for the championships.

Competitors will be tested upon arrival on Thursday and again on Friday after the end of competition. Each team will be tested in one sterile room before moving to a second clean room until all test results are completed.

There are also protocols in place in case an athlete tests positive. A second test will be immediately tested again and if that comes up negative a third test will be administered to verify the negative.

“Ryan has stepped up and is going above and beyond to make sure this happens safely,” Keller said. “Mike Moyer said without Ryan and his staff this event might not have happened. Really, without Ryan, the leadership of the American Rivers Conference, our director of athletics at Wartburg, Rick Willis, I’m in awe of the people who have stepped in to make this happen.”

Thirty-four different programs committed to bringing their squads to the tournament with some notable exceptions. No teams from the Wisconsin Intercollegiate Conference or Ohio Athletic Conference will be participating.

“Unfortunate we could not get everybody here,” Keller said. “But I‘m amped. I’m pumped. Our guys are getting a chance to compete against some of the best guys in the country and get this tremendous opportunity to wrestle one more time.”

“I’m excited it is here and I’m ready to go,” Briggs added.

Two days after the NCAA announced it was canceling all Division III winter championship events for the 2020-21 academic year, USA wrestling, the National Governing Body for wrestling in the United States has announced it is pursuing opportunities to host a season-ending event. 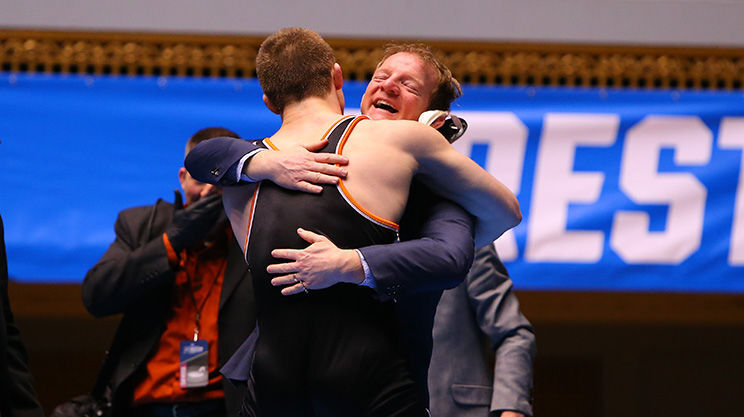