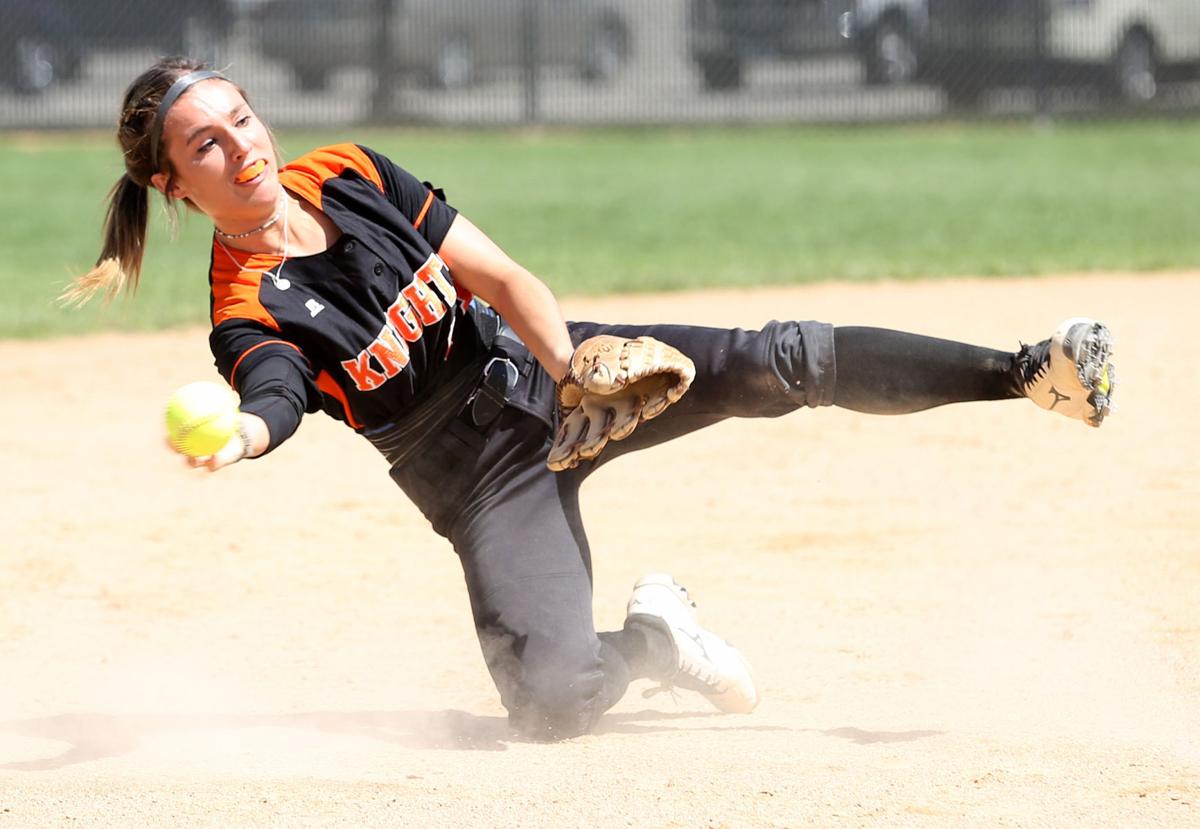 Wartburg’s Katie Sommer picks up an infield grounder and throws home during the first game of Saturday’s doubleheader in Waverly. 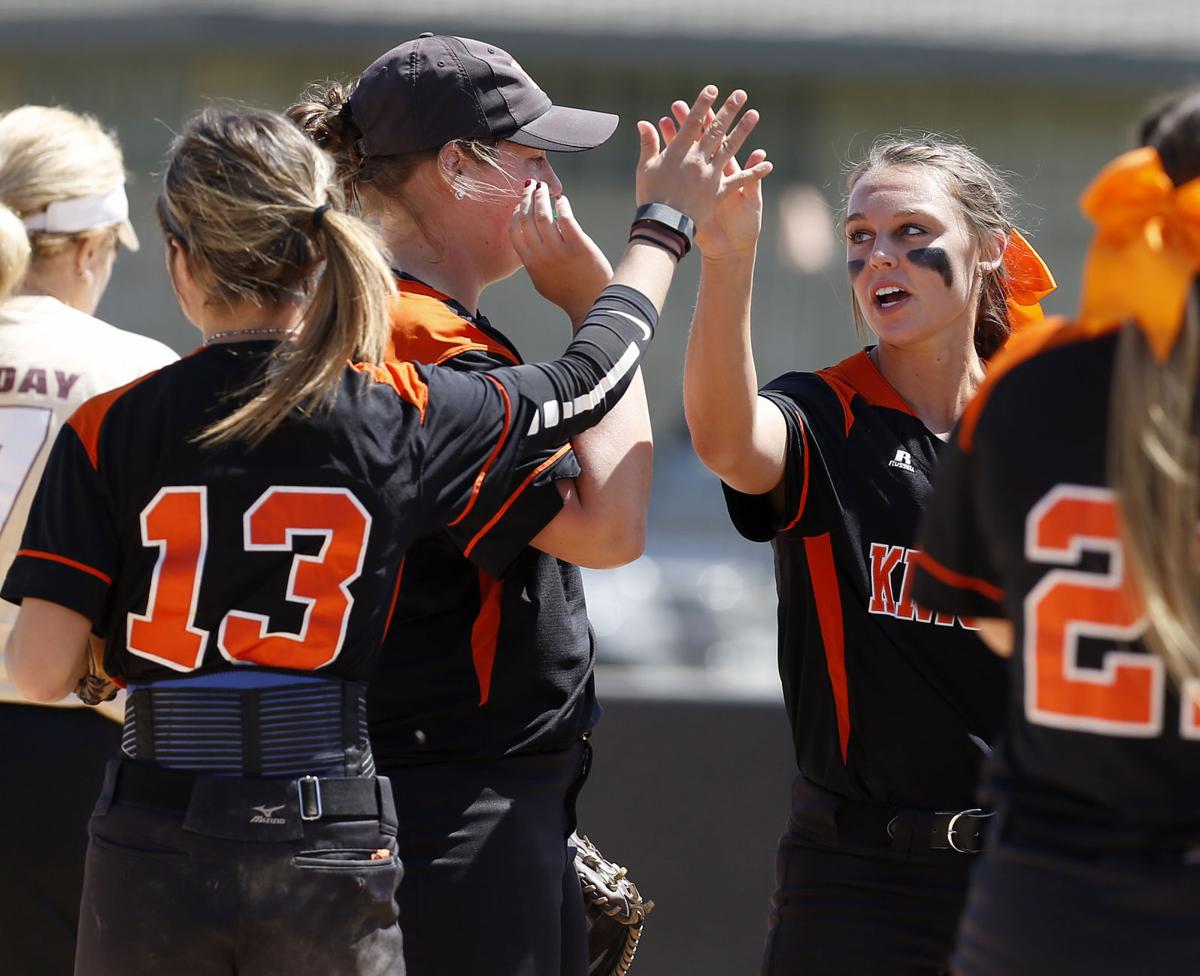 Wartburg pitcher Kimberly Wedeking is congratulated after striking out the last batter of the inning with bases loaded during the first game of Saturday's doubleheader against Coe. 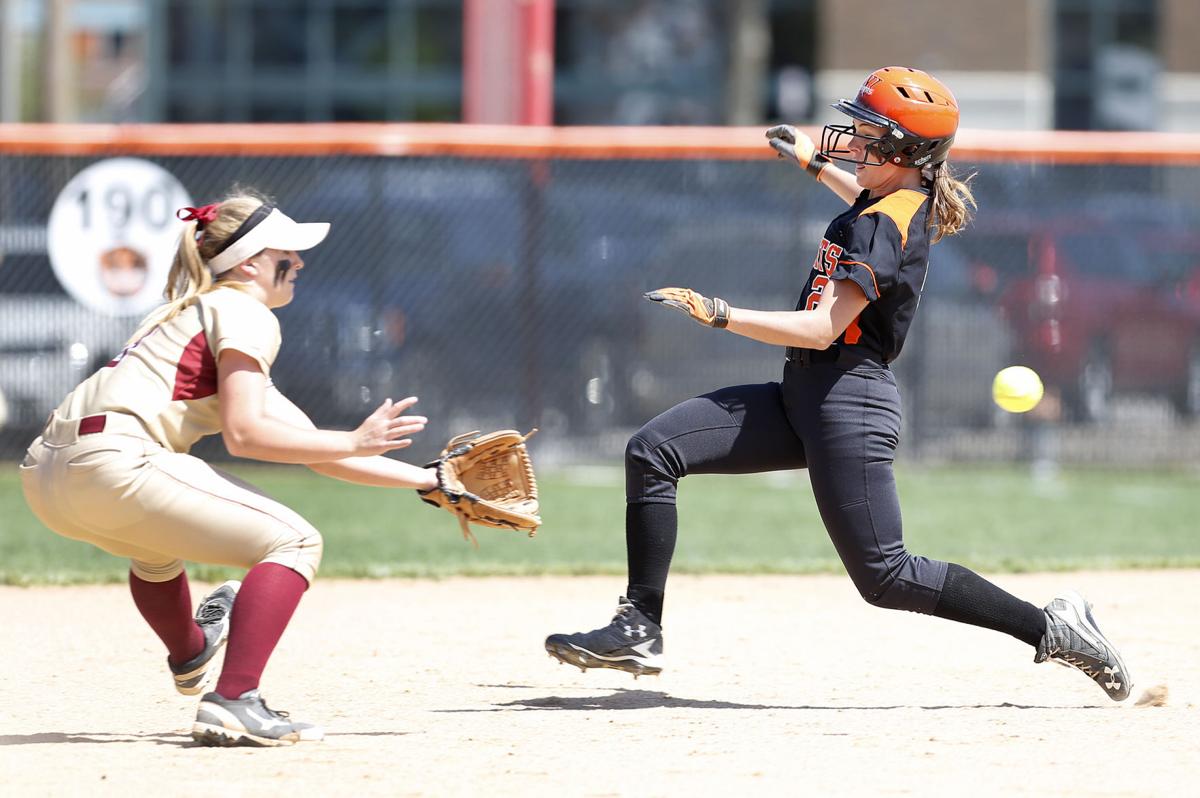 Wartburg's Liz Roby Miklus tries to beat the throw to Coe's Madi Miller at second base during the first game of Saturday's doubleheader in Waverly.

WAVERLY — From dugout chants to scrappy at-bats and aggressive throws that cut down baserunners, Wartburg’s softball players are competing with some extra pep in their step these days.

Not backing down from any team in the Iowa Conference, the Knights were one out away from a doubleheader sweep of No. 10 Coe during Saturday afternoon’s regular-season home finale at Lynes Field. Wartburg won game one, 8-2, before the Kohawks strung together three timely hits and salvaged a split with a 6-5 win in game two.

Wartburg placed runners in scoring position with two outs in the bottom of the seventh, but Jones fielded a grounder at second base and fired to first to end the threat.

“It was really fun to play against Breanna,” said Jones, who finished the doubleheader 3-for-5 with two home runs. “I haven’t actually gotten to bat off her. It was just a like, ‘Hey, it’s head to head. We’re not on the same team anymore and it’s all or nothing right now. ‘ I just went up there to have some fun. No pressure.”

Prior to Jones’ at-bat, Gray and Wartburg’s defense had kept in check a potent offense for a Coe team that owns a 28-7 overall record and is in second place at 10-3 in the Iowa Conference.

The doubleheader split moved Wartburg to 20-12 overall and 8-4 in the Iowa Conference. One win over the final four league games will give the Knights their first winning record in the conference since 2009.

Wartburg was 7-7 in the league last year during Jamie Mueller’s first season as head coach. The program had won just 10 conference games in the six seasons prior to her arrival.

“Our coaching staff has come in and done great things,” said Mara Forsyth, a Charles City native who opened game one with a three-run homer and hit Wartburg’s go-ahead two-run homer in the fourth inning of game two. “They have completely turned this program around and what our core values are for this program.

“Everyone who is a part of this team is on the same page. We all have the same overall goal in the end. I think that is honestly what has changed this program and why we’re being so successful right now.”

Mueller has been pleased with the manner in which her youthful team has tackled challenges such as Saturday’s doubleheader.

“They’re a hard-working group,” Mueller said. “They’ve bought into everything I’ve brought to the program, and they’re gritty and they fight hard. They deserve all the success they’ve had.”

Kimberly Wedeking, one of two seniors, set the tone for Wartburg in the pitcher’s circle during game one. The Clarksville native scattered four hits as the complete-game victory improved her record to 13-5. Catcher Taylor Smola, Wartburg’s other senior, followed Forsyth’s three-run home run with a solo shot during a five-run third inning that allowed the Knights to pull away.

“Both of them are great leaders,” Mueller said of her seniors. “The rest of team looks up to them and they can carry us through some big situations.”

On the heels of a split against Coe’s talented team, Mueller knows her squad will compete.

“We’ve been talking all season about the potential this group has and how we just need to turn it over and play to our potential,” Mueller said. “Playing games like this just shows them that they have a shot to beat anybody.”

Most Missouri Valley Conference basketball contests will be part of a two-game series set to take place on back-to-back days at one site.

UNI knocked down a school-record 20 3-pointers on 39 attempts, but was plagued by 17 turnovers as the Hilltoppers thrived in transition.

The game will tip-off at 6:30 p.m. and will serve as the season opener for both the Hawkeyes and Panthers.

Hawkeyes scored 38 points in third to pull away en route to 96-81 victory Wednesday at Carver-Hawkeye Arena.

No. 5 Iowa opens with a rout

Western Kentucky's experienced squad already will challenge a Northern Iowa team playing without one of its two seniors.

MINNEAPOLIS (AP) — Minnesota is calling off its scheduled game Saturday at Wisconsin due to positive COVID-19 cases within its program, a move…

Wartburg’s Katie Sommer picks up an infield grounder and throws home during the first game of Saturday’s doubleheader in Waverly.

Wartburg pitcher Kimberly Wedeking is congratulated after striking out the last batter of the inning with bases loaded during the first game of Saturday's doubleheader against Coe.

Wartburg's Liz Roby Miklus tries to beat the throw to Coe's Madi Miller at second base during the first game of Saturday's doubleheader in Waverly.