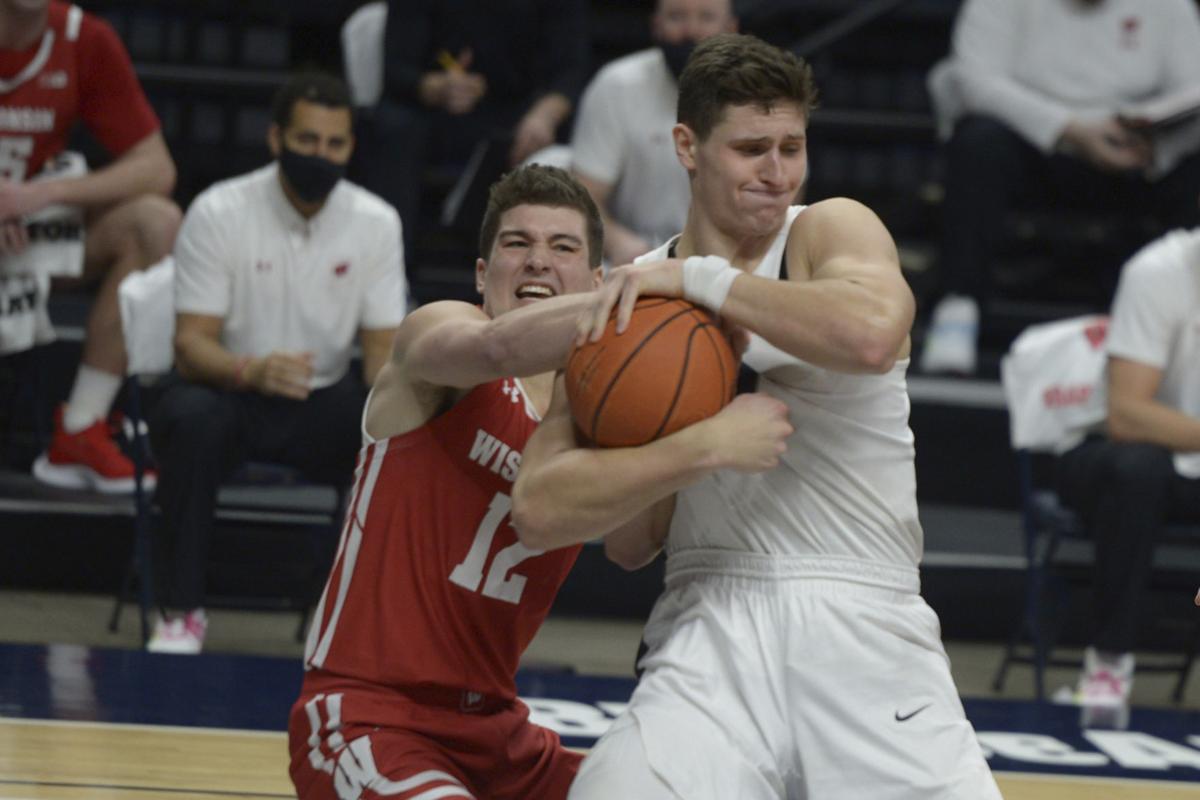 Penn State's John Harrar, right, battles Wisconsin's Trevor Anderson for possession of the ball during action this past season. Harrar is in the transfer portal and could be a nice addition to the Iowa Hawkeyes program. 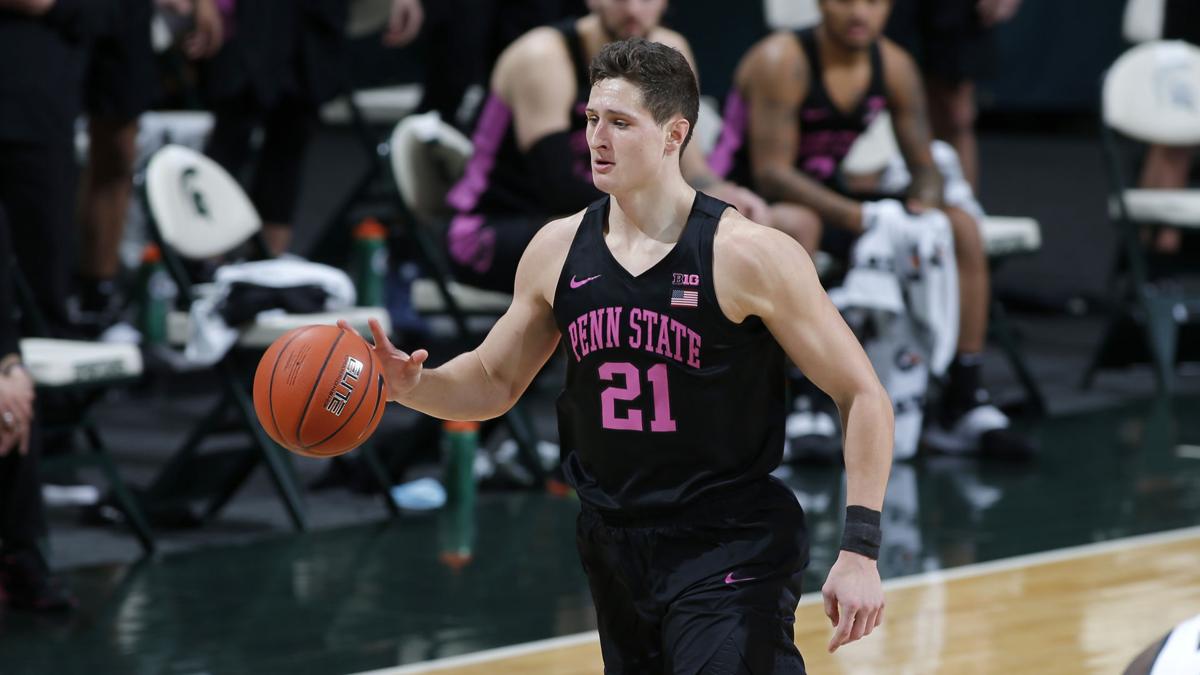 Penn State's John Harrar and six of his teammates have entered their names in the NCAA transfer portal. 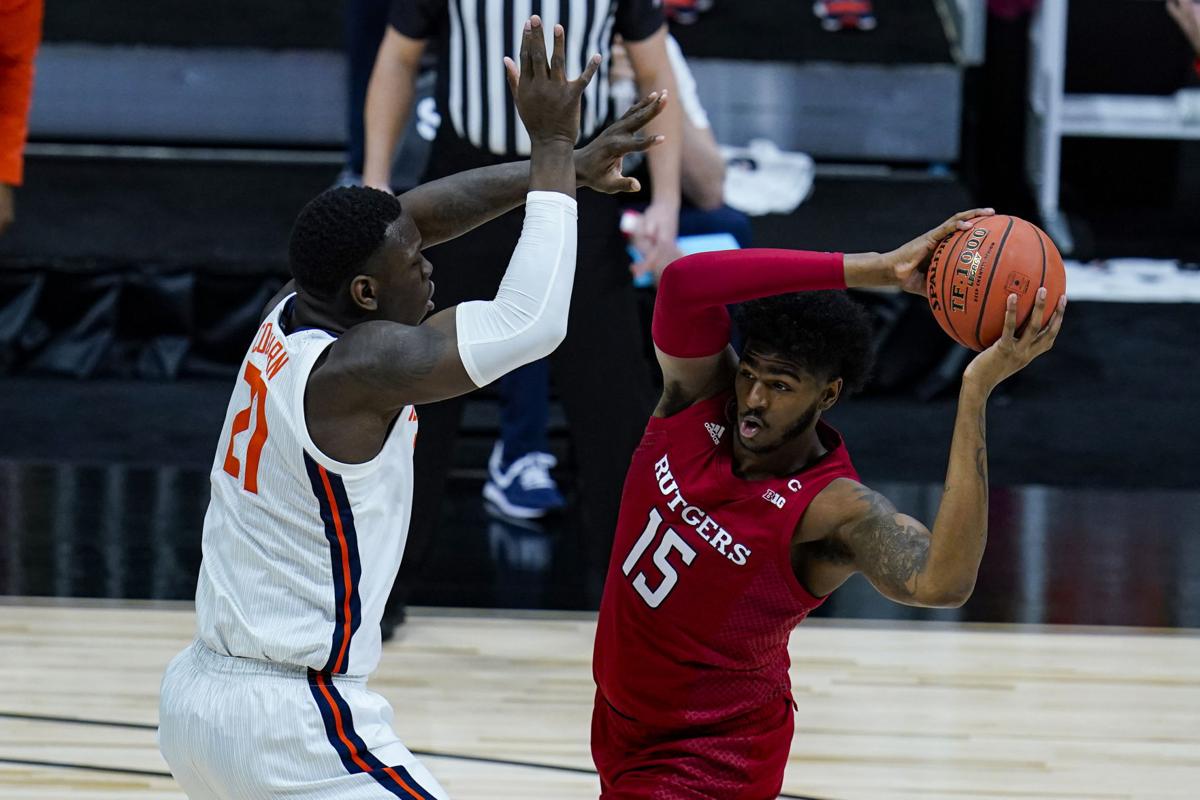 Rutgers center Myles Johnson (15) looks to pass around the defense of Illinois' Kofi Cockburn (21) during the quarterfinals of the Big Ten tournament. Johnson has announced plans to play elsewhere next season as a graduate transfer. 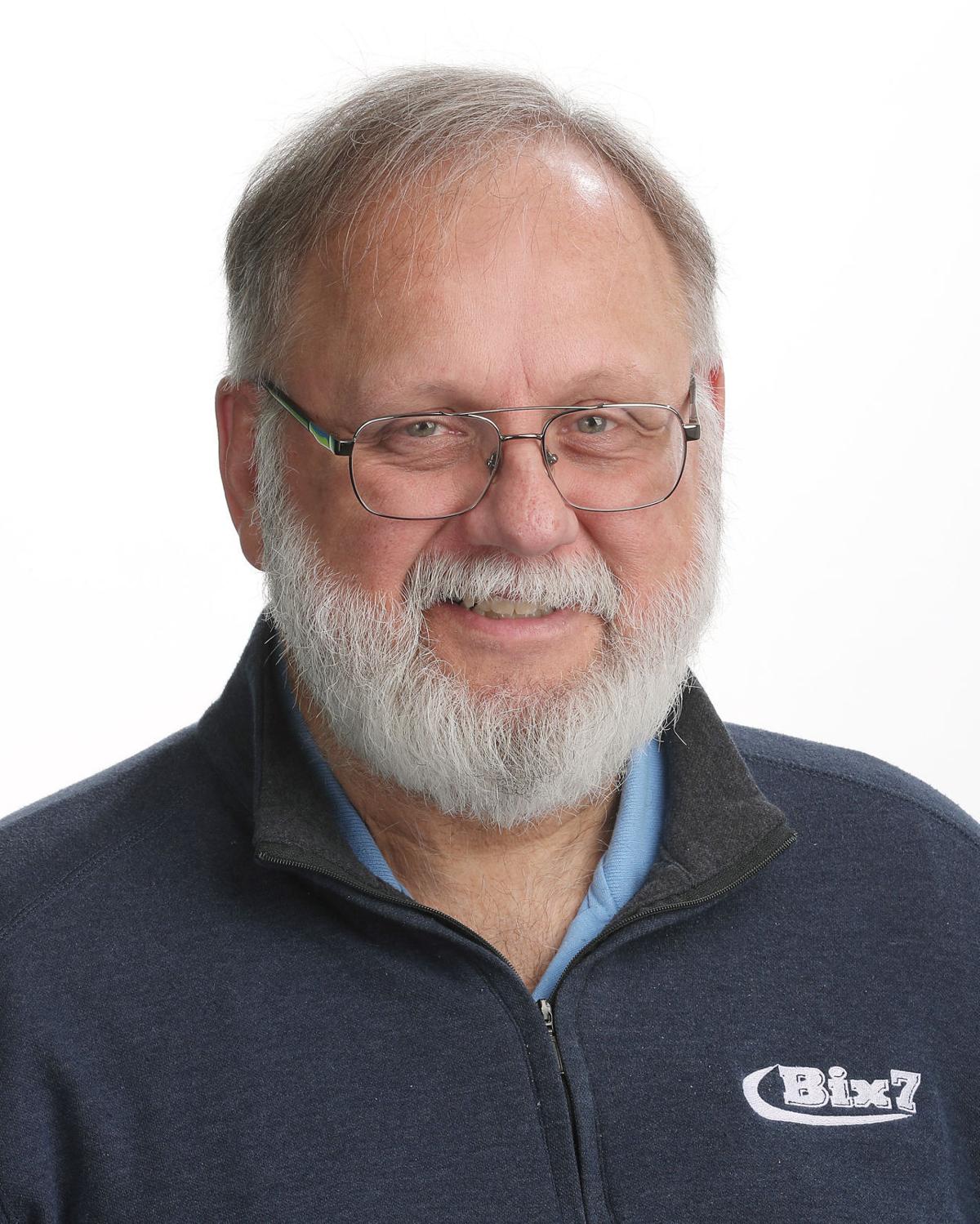 Iowa coach Fran McCaffery never has been eager to bring a lot of transfers into his basketball program.

His philosophy is totally understandable. He prefers to bring in high school players of above-average intelligence and high character, and develop them as players and people in his own way.

It creates a chemistry that is potentially disrupted by bringing in a player who began his career in another program and could arrive with personal baggage or an alternate agenda.

In McCaffery's 11 years as head coach, Iowa has taken only two transfers from other Division I programs: Jarrod Uthoff and Bakari Evelyn.

But it may be time to change that philosophy. The Hawkeyes really might want to take a dip in the transfer pool this spring, especially since it’s what so many other teams are doing to build and bolster their programs.

Of the 14 Big Ten Conference teams, 11 had at least one transfer in their rotations this season.

Transfers formed the nucleus for teams such as Nebraska and Minnesota, but it’s no longer just a way for bottom feeders to find a quick fix. Michigan won the Big Ten title thanks to the arrival of Mike Smith from Columbia and Chaundee Brown from Wake Forest. Holy Cross transfer Jacob Grandison became a starter at Illinois and Ohio State never would have gotten as far as it did without Justice Sueing (California), C.J. Walker (Florida State) and Seth Towns (Harvard).

Even with Luka Garza and Jordan Bohannon departing, McCaffery has the makings of a pretty good team, but with the addition of a key transfer or two he could have another very good team.

He has one open scholarship right now and if Joe Wieskamp decides to jump into the NBA draft or if someone transfers out, he will have more vacancies on the roster.

The Hawkeyes’ really could use some help in the frontcourt. There definitely is some uncertainty at the center position, where they have had the best option in the country in Garza the past two years.

Jack Nunge is in line to replace Garza at center and Keegan Murray may be a budding star at power forward, but with Nunge coming off his second knee surgery in as many years, the Hawkeyes need depth.

There are a few other players on the roster who can play power forward but the only other option at center is freshman Josh Ogundele, who was sick at the start of the season and never developed into being a major contributor, even after Nunge got hurt.

The 6-foot-10, 285-pound Ogundele played 36 seconds at the end of the first half against Illinois in the Big Ten tournament semifinals but all his other action this season was in mop-up situations. He played a total of 17 minutes in eight games.

If McCaffery is looking for a solid graduate transfer to add depth in the post, he doesn’t even need to look outside the Big Ten for quality options.

With the season not even fully completed, there already are more than 30 Big Ten players in the NCAA transfer portal, including five or more from each of the three schools that are changing coaches. Those players have the option of returning to their current schools and some of them will, but many of them won't.

The list includes two centers who started for their teams last season.

Penn State's 6-9 John Harrar is one of six Nittany Lions players to put their names into the transfer portal after the school chose to hire Purdue assistant Micah Shrewsbury as its head coach rather than giving the job to interim coach Jim Ferry.

Neither of those players is the super scorer that Garza was, but Harrar led the Big Ten in offensive rebounding and Johnson made the league’s all-defensive team.

Every time Iowa has played Rutgers, McCaffery has raved about Johnson and said he truly believes he is one of the best big men in the country, not just in the Big Ten. Johnson is looking to get a graduate degree in engineering so Iowa may not be the best fit academically but it's a great fit from a basketball standpoint.

Both those players fit with McCaffery’s desire to bring in high-character guys. Harrar is an academic All-Big Ten selection and won Penn State’s sportsmanship award. Johnson has started his own non-profit foundation, BLKdev, to encourage minorities to pursue careers in science, technology, engineering and math.

Players don’t place much higher on the character scale than these two and either of them would fit perfectly on the court either as a starter or as a backup behind Nunge and Murray.

Another possibility might be 7-1 Walker Kessler of North Carolina, a former five-star recruit who was unhappy with the amount of playing time he received as a freshman with the Tar Heels. He played only six minutes in a loss to the Hawkeyes in December but has unlimited potential.

There are going to be plenty of other viable transfer options as time goes on. In recent seasons, there have been 700 to 800 players in the transfer portal.

It seems silly not to consider jumping on the transfer bandwagon when the Hawkeyes have the need and at least one available scholarship.

Jalen Suggs banked in a shot from near midcourt at the buzzer, and Gonzaga, the No. 1 overall seed, will play Baylor for the title Monday night.

Stanford won it's first women's basketball championship in 29 years Sunday night with a 54-53 victory over Arizona, surviving the Wildcats' last-gasp shot in the final seconds.

Baylor beat Gonzaga 86-70 for the National Championship of the NCAA Tournament. Top-seeded Gonzaga (26-0) had won every game except one by double digits.

The Baylor Bears men’s basketball team can finally say the sweetest words in the sport: National champions. Baylor turned in a dominant performance against favorite Gonzaga, cruising to an 86-70 victory on Monday night at Lucas Oil Stadium in Indianapolis. The Bears (28-2) left no doubt who the best team in the country was this season in winning the program’s first national championship. For ...

Mark Story: The numbers that are going to force John Calipari and Mike Krzyzewski to change

Illinois junior Ayo Dosunmu on Tuesday announced what has been hinted at all season: He will forgo his remaining eligibility and hire an agent as he enters the NBA draft.

A roundup of Monday's NCAA Elite Eight action, including game summaries, top pics and updated brackets. Plus, a lookahead to tonight's matchups.

UCLA's Johnny Juzang dreamed of something like this, but not this

Every morning before school, and each night before bed, the eighth-grader would read the messages taped to his bedroom closet.

NCAA Tournament ref collapses on court, is stretchered off

An NCAA Tournament official collapsed during a Tuesday night game and was wheeled off the court on a stretcher.

Penn State's John Harrar, right, battles Wisconsin's Trevor Anderson for possession of the ball during action this past season. Harrar is in the transfer portal and could be a nice addition to the Iowa Hawkeyes program.

Penn State's John Harrar and six of his teammates have entered their names in the NCAA transfer portal.

Rutgers center Myles Johnson (15) looks to pass around the defense of Illinois' Kofi Cockburn (21) during the quarterfinals of the Big Ten tournament. Johnson has announced plans to play elsewhere next season as a graduate transfer.