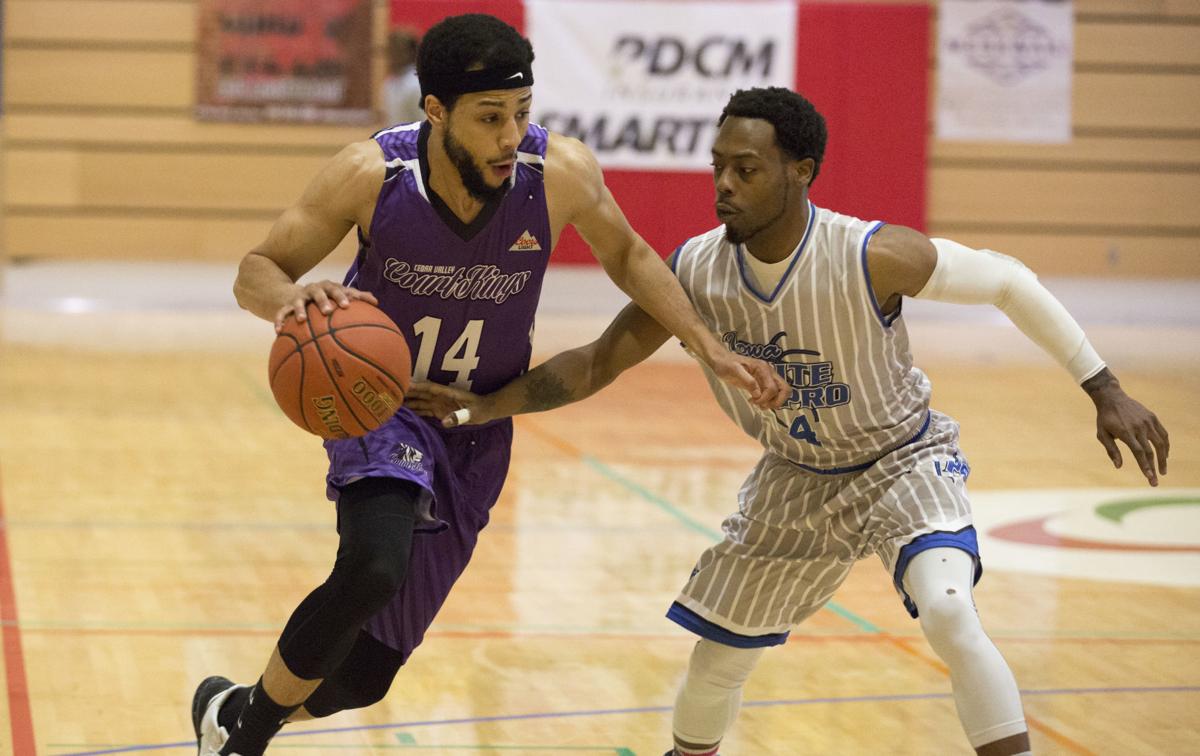 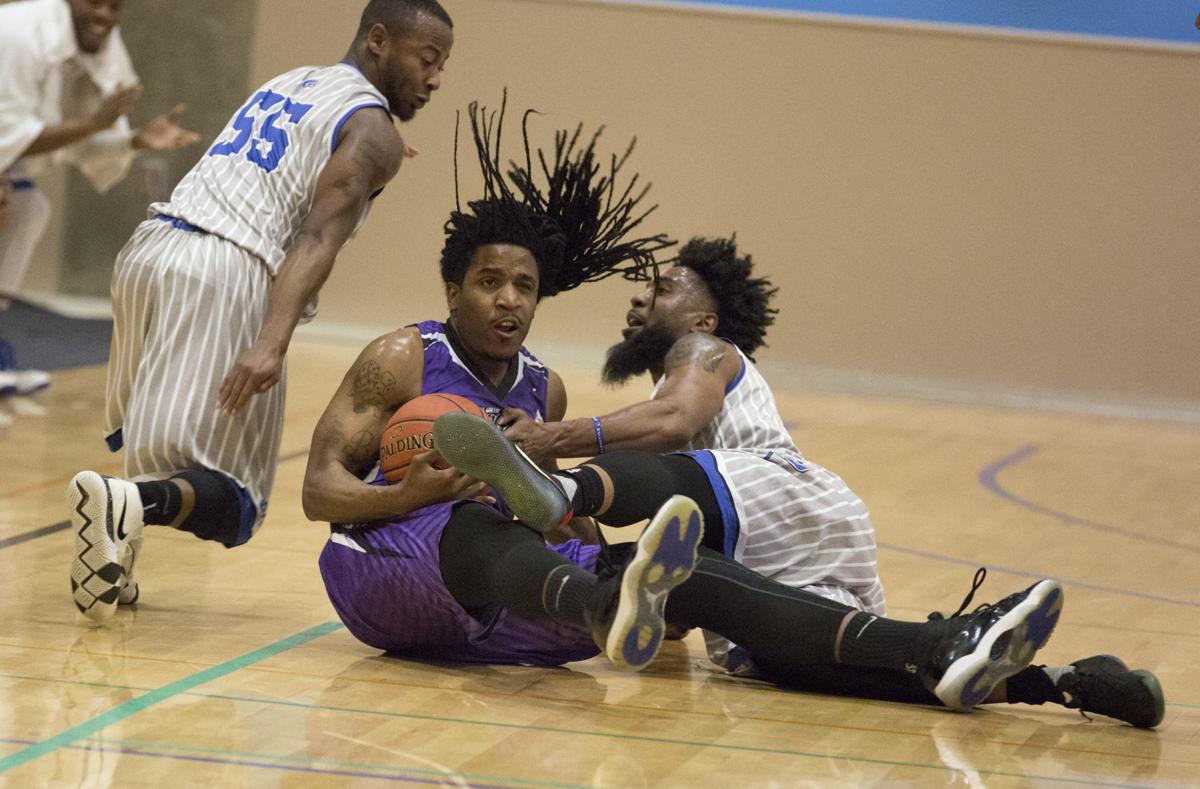 Cedar Valley's Brady Burford dives onto the court and battles former teammate Raheem Tyner for the basketball during the first half of Sunday's Midwest Basketball League game inside the Cedar Valley SportsPlex. 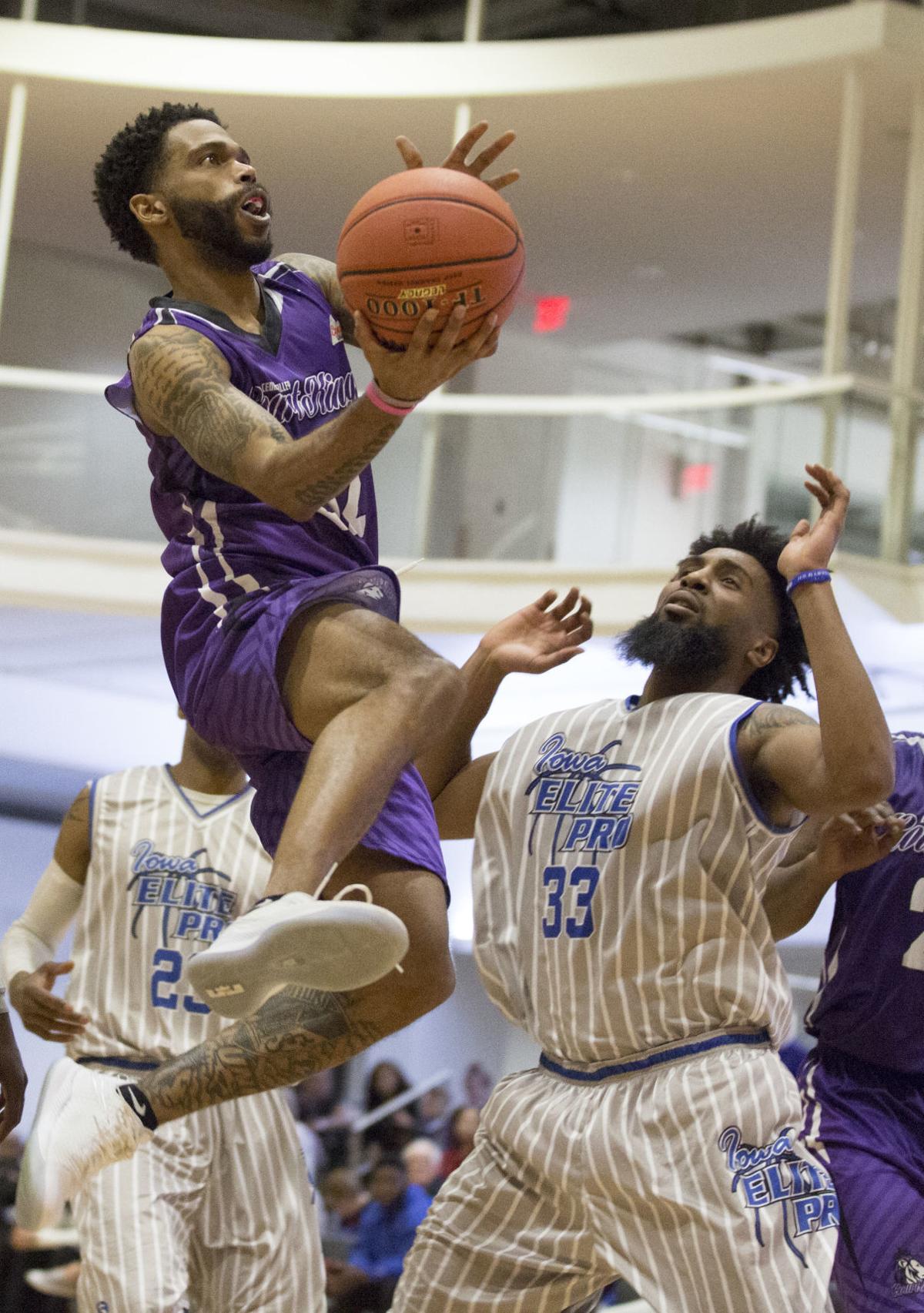 Cedar Valley's Anthony James goes up for a layup as Elite Pro's Raheem Tyner defends Sunday night inside the Cedar Valley SportsPlex. James led the CourtKings with 27 points during a 123-118 opening-night victory. 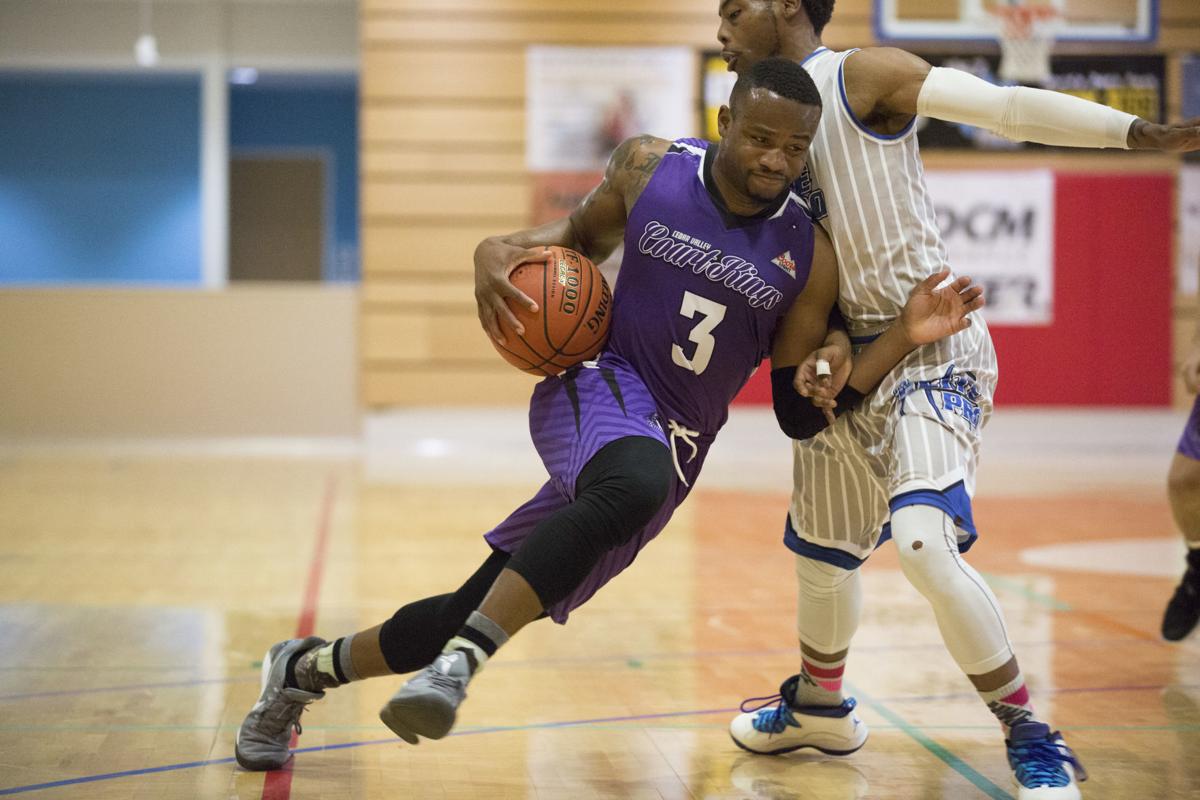 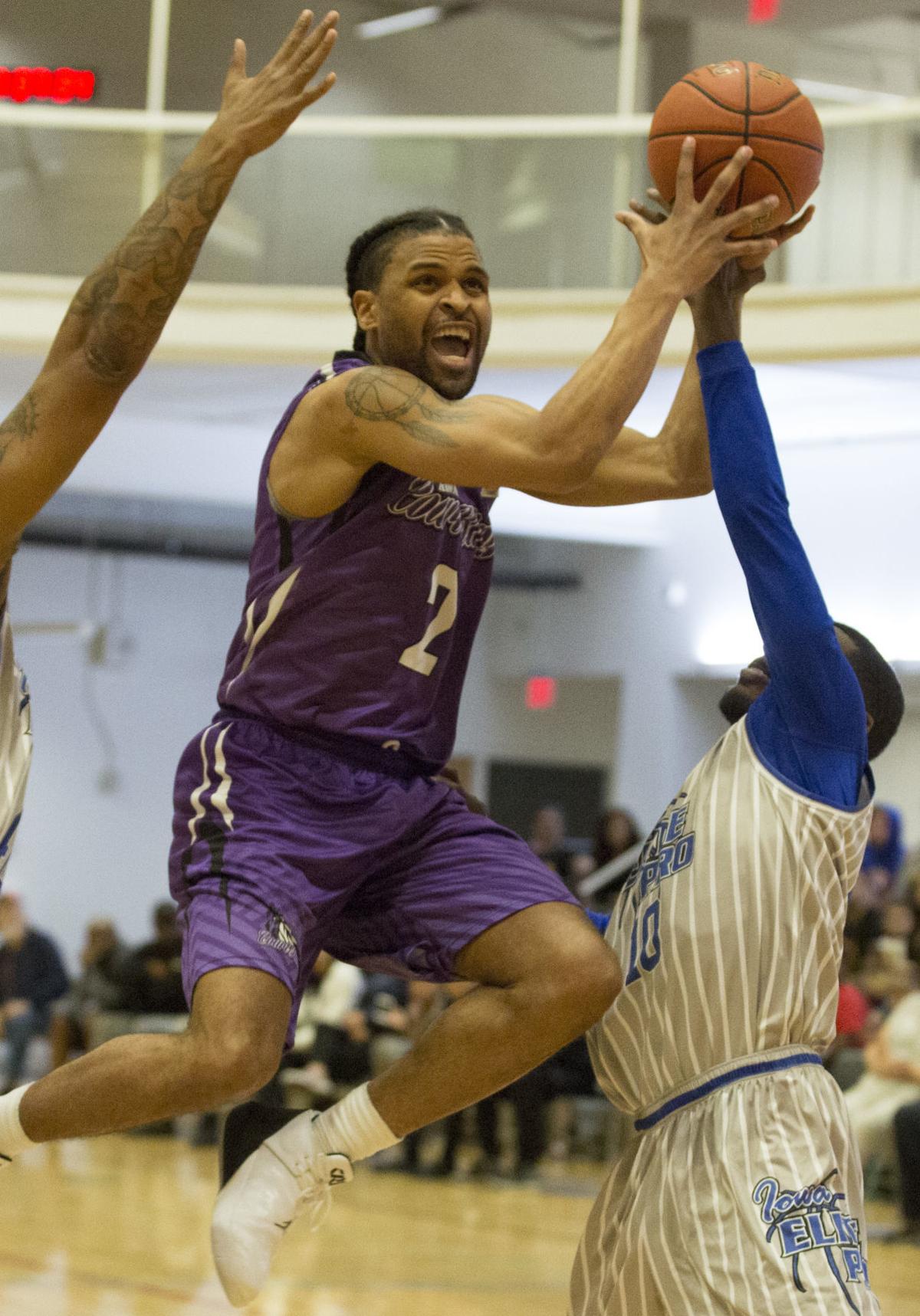 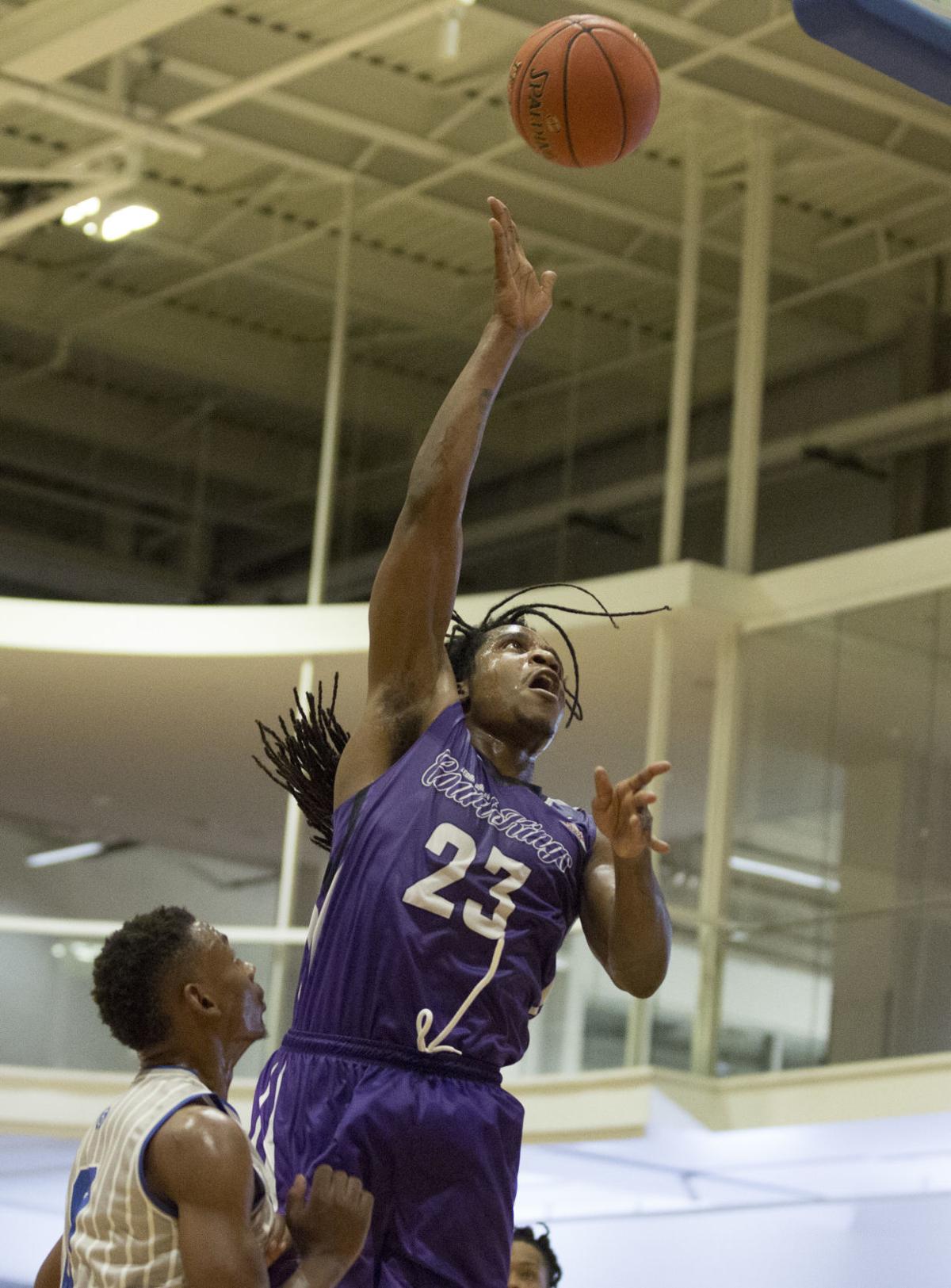 After a five-point run by Des Moines’ expansion Iowa Elite Pro cut the Cedar Valley CourtKings’ lead to two with under one minute remaining in Sunday night’s Midwest Basketball League opener, Hicks took the ball hard off the dribble for a crucial run-stopping layup.

Hicks then knocked down a pair of free throws with 14 seconds remaining to secure the CourtKings’ 123-118 victory as a fourth season of professional basketball tipped off inside Waterloo’s Cedar Valley SportsPlex.

“I felt like I had an opening and we have shooters so they couldn’t help,” Hicks said, reflecting on a drive that provided separation in a late one-possession game. “That’s a position my team puts me in to create plays. I feel really comfortable. With this team, we’re really athletic and can shoot the ball, so I had a lot of space to make the move.”

Hicks finished with 24 points — 10 in the fourth quarter — while fellow fourth-year CourtKings veteran Anthony James knocked down his first four shots of the final quarter and tallied 13 of his game-high 27 points in the last stanza.

“They’re coaches on the court,” CourtKings coach Michael Mohlis said of his backcourt tandem. “Those two down the stretch were phenomenal. They know how to compose the group.”

Last year’s lead scorer, Brady Burford, also caught fire for Cedar Valley, overcoming a 1-for-6 start from the field to finish with 22 points.

An Iowa Elite Pro team that opened its season with a 154-130 win over the Minnesota Broncos quickly served notice that it’s going to be a contender in year one. The CourtKings trailed 44-37 in the second quarter as Iowa Elite took advantage of second-chance opportunities and also finished drives through contact.

Hicks then knocked down a 3-pointer and the CourtKings came up with a series of defensive turnovers during a 15-0 go-ahead run capped by James’ quick, shifting, full-court drive through traffic.

“That run was crucial and it started on the defensive end,” Mohlis said. “When we’re locked in and have five guys working together, good things happen. When we play team defense, this group is going to be fun to watch because they’ve got a lot of chemistry already.”

The CourtKings never trailed after that 15-point surge, but Iowa Elite put together a pair of strong rallies in the second half. Cedar Valley’s lead was cut from 13 to four over a seven-minute stretch in the third quarter. After James opened the fourth quarter with a series of baskets and Jaree Crawford added an interior bucket for a 13-point CourtKings lead, Reed Mells rallied Iowa Elite with three consecutive 3-pointers.

“It’s real different,” Hicks said of playing against his former teammates. “I’m happy for those guys. I hope they continue their career and pursue it. They won a championship with us in 2017.”

Mohlis is excited about the potential his year’s CourtKings team possesses with its blend of veterans and newcomers.

“It was a high-level game,” Mohlis said. “Those guys played with a lot of energy. We knew that they would come out that way, but our guys battled.

“There were some guys that didn’t get a lot of time tonight that are going to help us this year. Our 7-footer Isaac Freeman is battling, (Jared) Sutherland will be getting a ton of time this season. Other guys will step up this year, too, so I’m excited for the journey that we’re on. I believe in all these guys.”

LeBron James believes the secret to the success of his partnership with Anthony Davis goes far beyond talent.

Watch Now: How the NBA Fights Racism with International Players

Grammys opened with a musical tribute to Kobe Bryant

Grammys opened with a musical tribute to Kobe Bryant

Cedar Valley's Brady Burford dives onto the court and battles former teammate Raheem Tyner for the basketball during the first half of Sunday's Midwest Basketball League game inside the Cedar Valley SportsPlex.

Cedar Valley's Anthony James goes up for a layup as Elite Pro's Raheem Tyner defends Sunday night inside the Cedar Valley SportsPlex. James led the CourtKings with 27 points during a 123-118 opening-night victory.