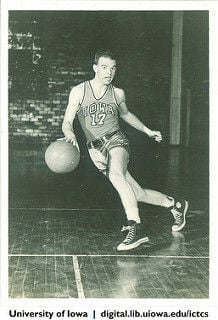 Murray Wier had a remarkable career as a basketball player at Muscatine High, the University of Iowa and in the early days of the NBA before a highly successful coaching career at Waterloo East High School. 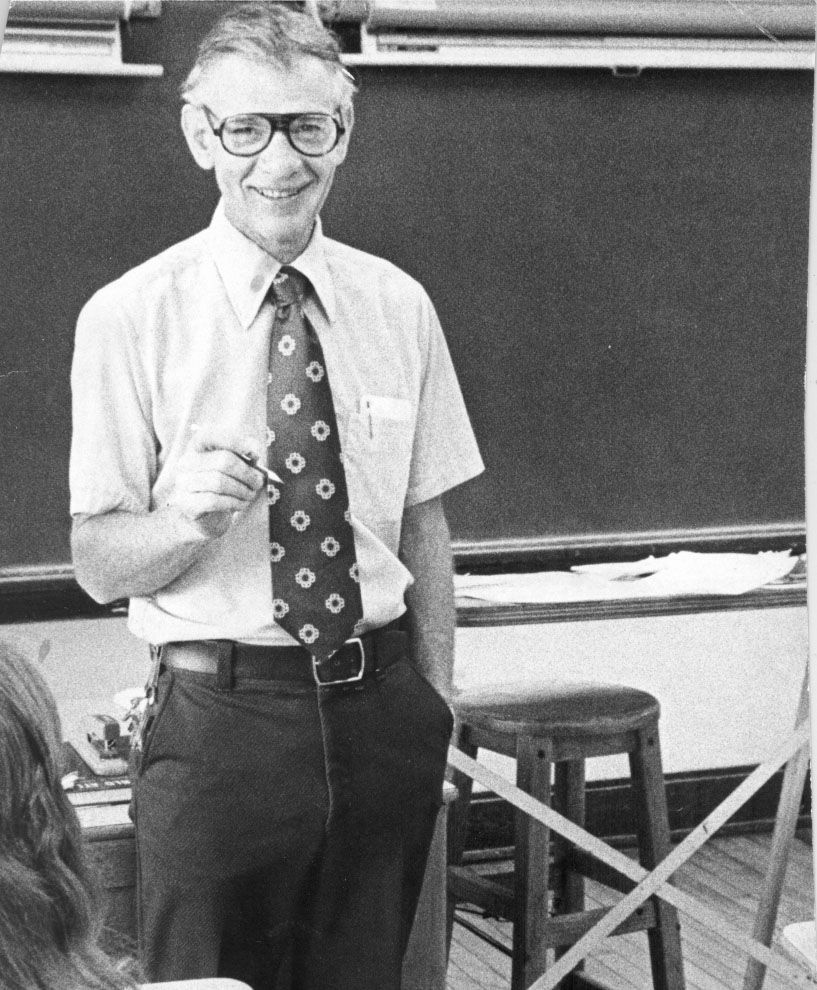 NAME THAT COACH: This coach is pictured standing in a Waterloo East High School classroom.

He lived with a quick wit and a fierce desire to win. He lived to coach, to teach, to succeed.

Wier did all of that. And now, Wier’s friends and peers must say farewell to him in their own way.

An All-American basketball player at Iowa, a Hall of Fame coach plus an athletic director during a long career at Waterloo East, Wier died Wednesday at his home in Georgetown, Texas. He was 89 years old.

“I just loved the guy so much,” said Bob Siddens, the former head wrestling coach and athletic director at Waterloo West who was a close friend of Wier. “It was so sad.”

The list of his accomplishments is lengthy. An all-state basketball player during his one season at Muscatine High School, Wier was the first Iowa Hawkeye to earn consensus first-team All-America honors during his senior year of 1947-48. After that, he played in the early incarnation of the National Basketball Association before trying his hand in 1951 at education.

At East, Wier ended a 49-year dry spell between state basketball championships for the city of Waterloo when he guided the Trojans to a Class AA title in 1974. He’s one of only three men, along with Bud Bergman and Tom Goodman, to earn induction into the Iowa High School Athletic Association players’ and coaches’ halls of fame.

Wier ended a 38-year sports career when he retired as a teacher and East’s athletic director in 1989. Now, the legacy is complete, and the tributes to Wier came in when word of his passing spread.

In a statement, IHSAA Director of Information Bud Legg said, “The Iowa high school basketball community is saddened to hear of the passing of Murray Wier. Our condolences go to his family and friends. His playing credentials at Muscatine High School and the University of Iowa and his excellence in coaching at Waterloo East validate the numerous honors he received in his lifetime.”

Allan Pace, now the athletic director at East, said Wier’s contributions continue to be a part of life at the school. The basketball court at Fred J. Miller Gymnasium is named the Wier-McGraw Court in honor of him and Steve McGraw.

Said Pace, “He meant so much to so many, and had a huge impact on the lives of the students he worked with in the classroom, the athletes he coached in basketball and tennis and the teams he guided as the longtime athletic director at Waterloo East. Mr. Wier’s impact continues to be felt through all of the generations of athletes who have gone through our building and those who continue as athletes here at East today.”

Gary Barta, the athletic director at Iowa, praised Wier’s contributions to the university in a prepared statement.

Said Barta, “Murray Wier is recognized as one of the very best basketball players to ever compete for the University of Iowa. His individual talents were ahead of his time, and he led the Hawkeyes to a Big Ten championship, along with both a second- and third-place finish. More importantly, he was a great representative of the University of Iowa, and Hawkeye basketball, throughout his life. “

Known as the “Rampaging Redhead” during his playing days at Iowa, Wier was the first player to officially lead the NCAA in scoring at 21 points per game in 1947-48. His professional playing career lasted from 1948-51. Seeking a more permanent path, Wier came to East in 1951. After one season as a sophomore coach, he moved to the Trojan varsity in 1952-53.

Over time, people came to know Wier’s personality. One element of it was his sense of humor, his ability to make people laugh. He hung nicknames on neighborhood kids that lasted a lifetime. In the middle of difficult times on the job, Wier found something amusing.

“He could see something in almost any situation that would make you laugh,” said Roger Kittleson, who was one of East’s football coaches during Wier’s time as athletic director.

Said McGraw, “He said things no one else could get away with, especially now. He had such a quick wit about him. He was amazing.”

The same thing could be said of his coaching career. Over 24 seasons at East, Wier rolled up a 372-149 record. He coached standout athletes like Don Ross, Lonnie Porter and Jerry Moses. He was memorable.

Said Dave Buhr, who played for Wier, “He was a great person. He drove us harder than anybody. We knew if we wanted to compete at a high level we had to put forth that effort. We won 70, 75 percent of our games and the reasons behind that were we had good talent, but the kids who played for him knew how to work, too. That meant a lot.”

Wier took East to the state tournament eight times, but he didn’t claim that state title until his final appearance in 1974.

“We were all so dang happy he finally won it,” said Wier’s son, Terry. “But he never talked about winning or losing. It was a bit of a relief; he’d come close, but he never brought that up. But it was fun. We were glad to see him win it. It was kind of an open door that needed to be shut.”

Wier resigned as East’s head coach in 1976, although he stayed on as the athletic director and history teacher for another 13 years.

While he didn’t sit on the bench in Fred J. Miller, he remained a competitor. The same coach who used to fling clipboards around the lockerroom could be just as tough in a friendly game of tennis, as McGraw learned.

“I was fairly athletic when I first got here,” said McGraw. “I wasn’t a very good tennis player, but Murray dragged me out one time and proceeded to beat me like a drum. Never again. He was so competitive. I don’t care how old he was, you’d go out and play him and he was like a backstop. He returned everything. He wasn’t going to let you beat him.”

Yet, the same Wier who competed so fiercely also let his coaches do their jobs.

“He was probably a very loyal individual,” said Kittleson. “I couldn’t have asked for a better man to be associated with.”

Said McGraw, “He basically said, ‘I got you a game; go play it.’ That’s what he did. I was a young guy coming in there. I’d been coaching for 10 years and I thought I knew a lot. He really helped me, but he didn’t interfere. If I had any questions, he would give me a good answer.”

Following Wier’s move to Texas, Buhr began a campaign to get Wier’s college jersey (No. 17) retired. Instead, Wier’s career is part of displays depicting the history of Iowa basketball at Carver-Hawkeye Arena and the university’s Athletics Hall of Fame.

Wier didn’t talk about it much, aside from joking that he was again a “big man on campus.” The family did get a copy of a storyboard that’s part of the displays.

“It was in the hallway, and every time he went down that hall, he stopped to look at it,” said Terry Wier.”He really liked that storyboard.”

There was a lot to like about the life and career of Murray Wier. The player. The coach. The competitor. The volunteer. The athletic director who called up his friend Bob Siddens at West and began every conversation with “Partner.” The man.

And now it is done.

“He was the funniest guy you’d ever want to meet,” said Terry Wier.

“He was just a good friend,” said Roger Kittleson.

Wier is survived by his wife, Marge, and children Terry, Sandra, Marcia, Jeff, and Sally. Funeral arrangements are pending.

LAKE BUENA VISTA, Fla. (AP) — Black players were next to white players. Coaches from one team were next to their compatriots from the opposing…

CHAMPAIGN, Ill. — Lou Henson, the plain-spoken coach who took New Mexico State and Illinois to the Final Four during a 21-year career that included nearly 800 victories and a feud with fellow Big Ten coach Bob Knight, has died. He was 88.

Murray Wier had a remarkable career as a basketball player at Muscatine High, the University of Iowa and in the early days of the NBA before a highly successful coaching career at Waterloo East High School.

NAME THAT COACH: This coach is pictured standing in a Waterloo East High School classroom.