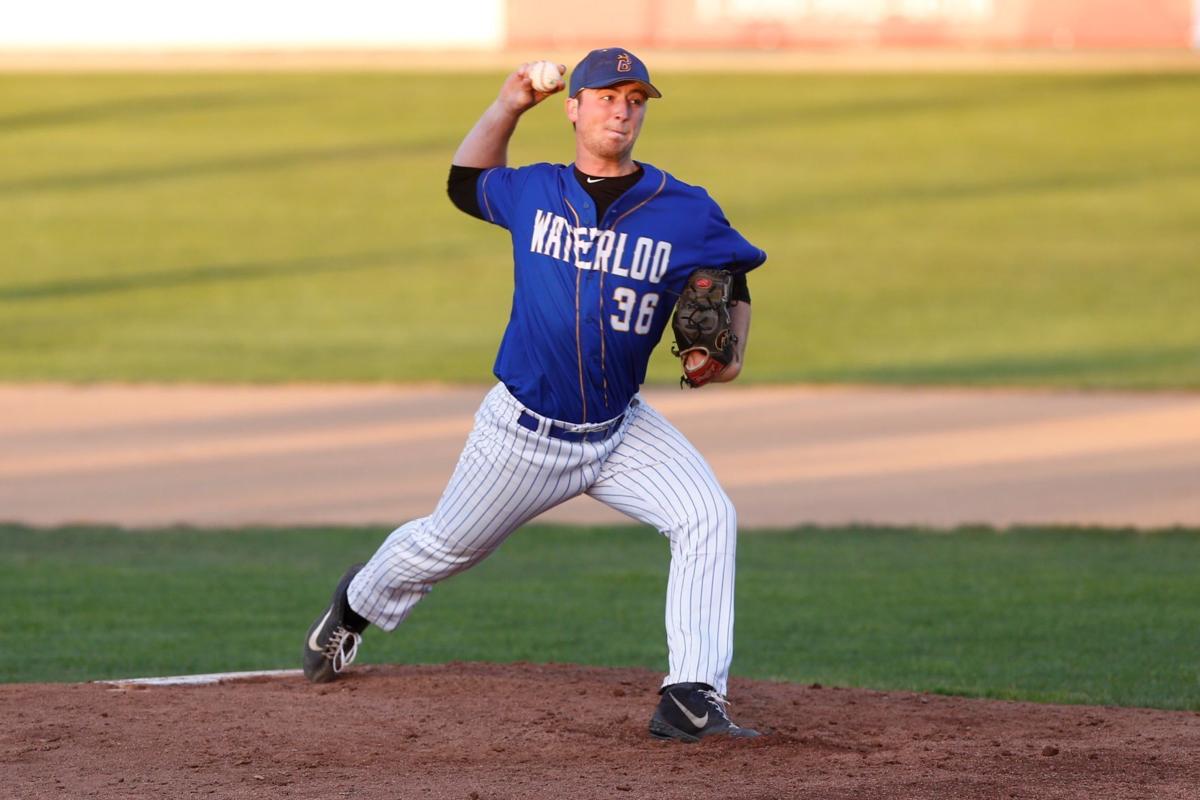 Waterloo Bucks pitcher Duncan Davitt fires a pitch in the sixth inning Monday in a Northwoods League playoff game against the Duluth Huskies at Riverfront Stadium. 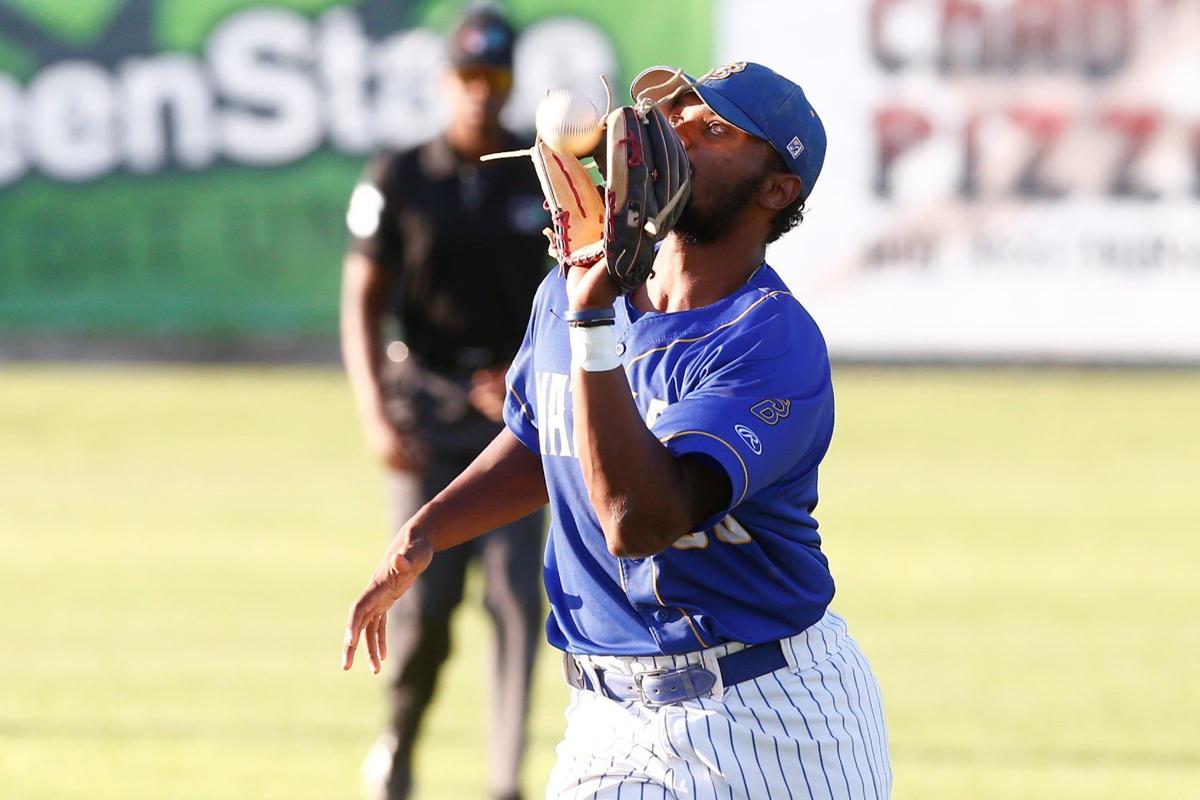 Waterloo's Jalen Smith hauls in a pop fly during the third inning Monday during a Northwoods League playoff game at Riverfront Stadium against the Duluth Huskies. 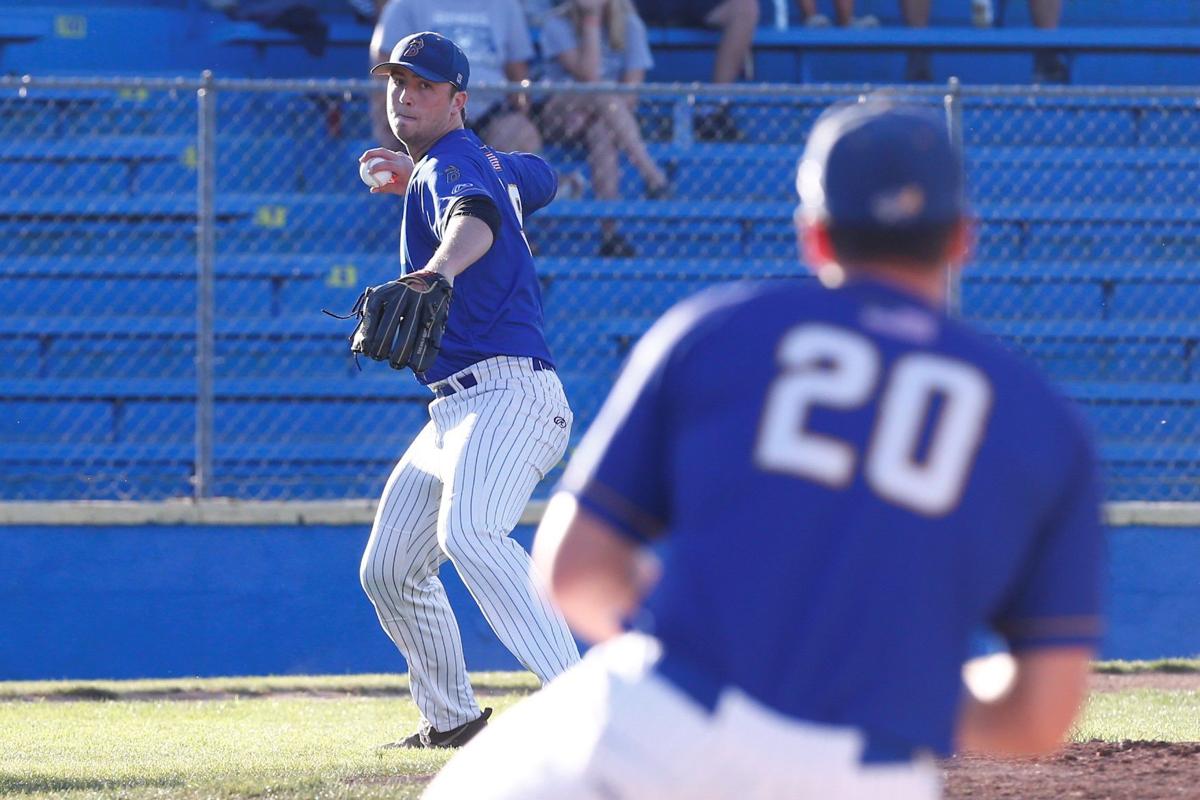 Waterloo Bucks pitcher Duncan Davitt fires to first after fielding an infield hit during the first inning Monday in a Northwoods League playoff game against the Duluth Huskies. 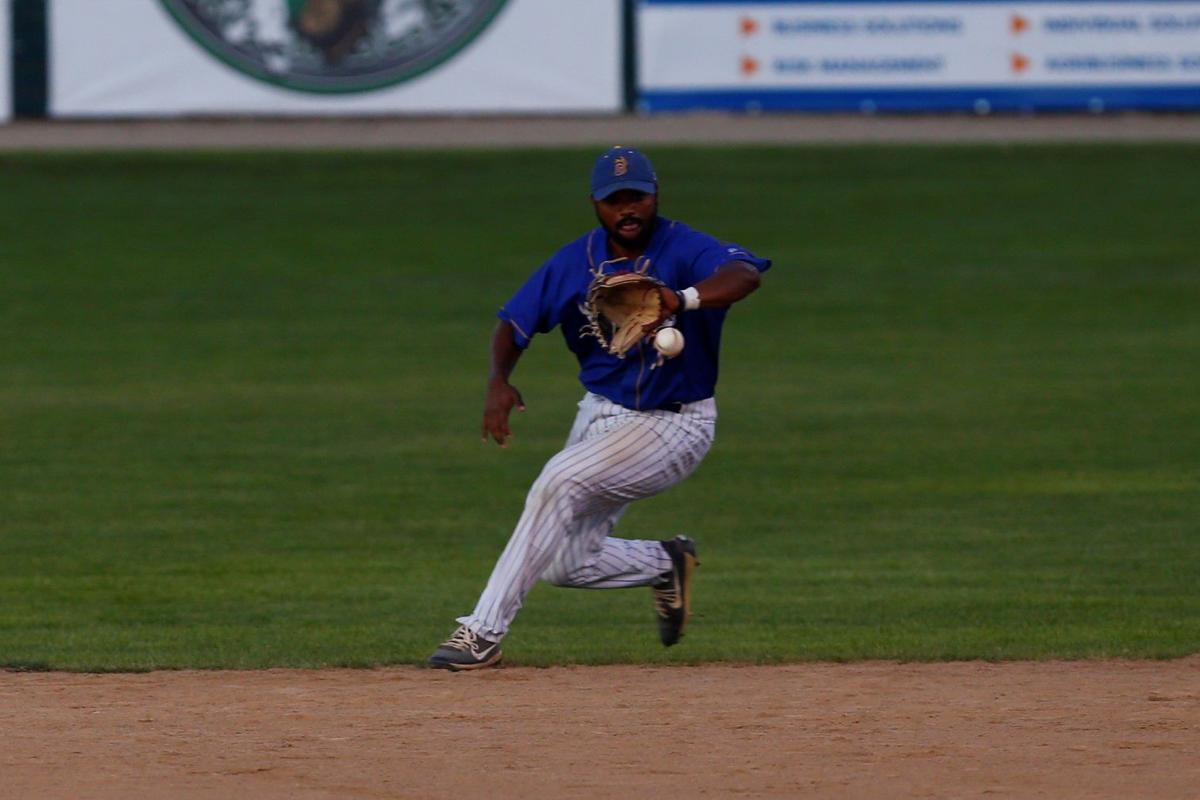 WATERLOO – Through 53 outings and 35 starts, Duncan Davitt had never recorded an out in the seventh inning of a collegiate level baseball game.

The big right-hander from Indianola, who has been the University of Iowa’s Sunday starter for two seasons, not only cruised through the seventh, but he got the first out of the eighth in a masterful performance.

Davitt led the Waterloo Bucks to a sweep in the Northwoods League’s Great Plains subdivisional series with a 6-0 gem at Riverfront Stadium.

Davitt, who carried a 4-2 record and 3.26 earned run average into the contest, allowed just five hits and struck out eight before reaching the league’s pitch count maximum of 110 in the eighth.

Meanwhile, Liam Critchett stoked the Bucks’ potent offense with a two-run single to right in the first inning after Emi Gonzalez had bounced an RBI knock up the middle as part of a three-run start for Waterloo.

Duluth never got comfortable against Davitt. When the Bucks starter couldn’t find his fastball command in the early innings, he mowed down the Huskies with his slider. And when he found his heater in the middle innings, he dominated and retired 12 of 13 batters at one point.

“All the credit goes to Tavan (catcher Shahidi),” Davitt said. “He did a great job back there, blocking a lot of tough pitches and stealing a lot of strikes. He had a great game back there.”

Davitt got a little help from his defense in the third. First, right fielder Sam Biller hustled to back up an errant throw on a single. That proved important one out later when, with runners on first and third, shortstop Luke Fennelly started an inning-ending double play from his knees.

The Bucks (44-25) added a run in the sixth on Shahidi’s sharp, bad-hop single past the second baseman that scored Gonzalez, who had three hits and scored three times.

Critchett put the finishing touches on Waterloo’s first playoff series win since 2002 by blasting a two-run homer over the fence in right in the eighth. It was the first time the Bucks have clinched a playoff series win at home since the 1996 season.

“It was a good day,” said Critchett with a rake in hand following the game. “Picking up a couple of runs early allowed us to really settle in and play a good game of ball.”

Like everyone else at Riverfront, Critchett marveled at Davitt’s performance.

“Duncan was carving tonight,” he said. “His stuff was electric, from the first pitch. Playing behind him’s really easy. He shoved it to the other team with a lot of strikeouts and a lot of weak contact which makes it easy to play.

“We’re playing a good brand of ball and that’s why we’re running through the playoffs right now. It’s a good team.”

Davitt left to a standing ovation in the eighth, and Aaron Treloar took over.

“This might be the longest I’ve gone in any game, including high school,” said Davitt. “It was pretty surprising, even for me, because I was a little down on pitch count the past couple of weeks. Being able to carry the velocity into that last inning was awesome.”

Treloar pitched out of a one-out, bases loaded jam in the eighth by getting a pop-up and a strikeout, then sent the Bucks on to the divisional championship game by retiring Duluth in the ninth.

A Waterloo team best known for an offense that leads the Northwoods League in batting average (.277), runs (462) and RBIs (406) showed it can throw and catch the ball pretty well, too.

“We had one of the best offenses in Waterloo Bucks history this year, and that’s a credit to our coaches,” said Bucks manager Ryan Gaynor. “But people sleep on our pitching staff and especially the bullpen, and we saved the biggest moment for the biggest game of the season so far. We put up a shutout. Our pitching has been a strength all season. Sometimes, it’s just overshadowed by that offense, but these guys are just as good as anybody in this league.

Waterloo will travel to St. Cloud (52-18) for Tuesday night’s one-game showdown for the Great Plains title and a berth in the league finals.

Local journalism matters now more than ever. Get your Courier digital subscription today.

Jackson Lyon drove in five runs, and Zach Button earned the save as the Bucks beat Duluth, 8-6, Sunday at Riverfront Stadium.

Waterloo Bucks pitcher Duncan Davitt fires a pitch in the sixth inning Monday in a Northwoods League playoff game against the Duluth Huskies at Riverfront Stadium.

Waterloo's Jalen Smith hauls in a pop fly during the third inning Monday during a Northwoods League playoff game at Riverfront Stadium against the Duluth Huskies.

Waterloo Bucks pitcher Duncan Davitt fires to first after fielding an infield hit during the first inning Monday in a Northwoods League playoff game against the Duluth Huskies.